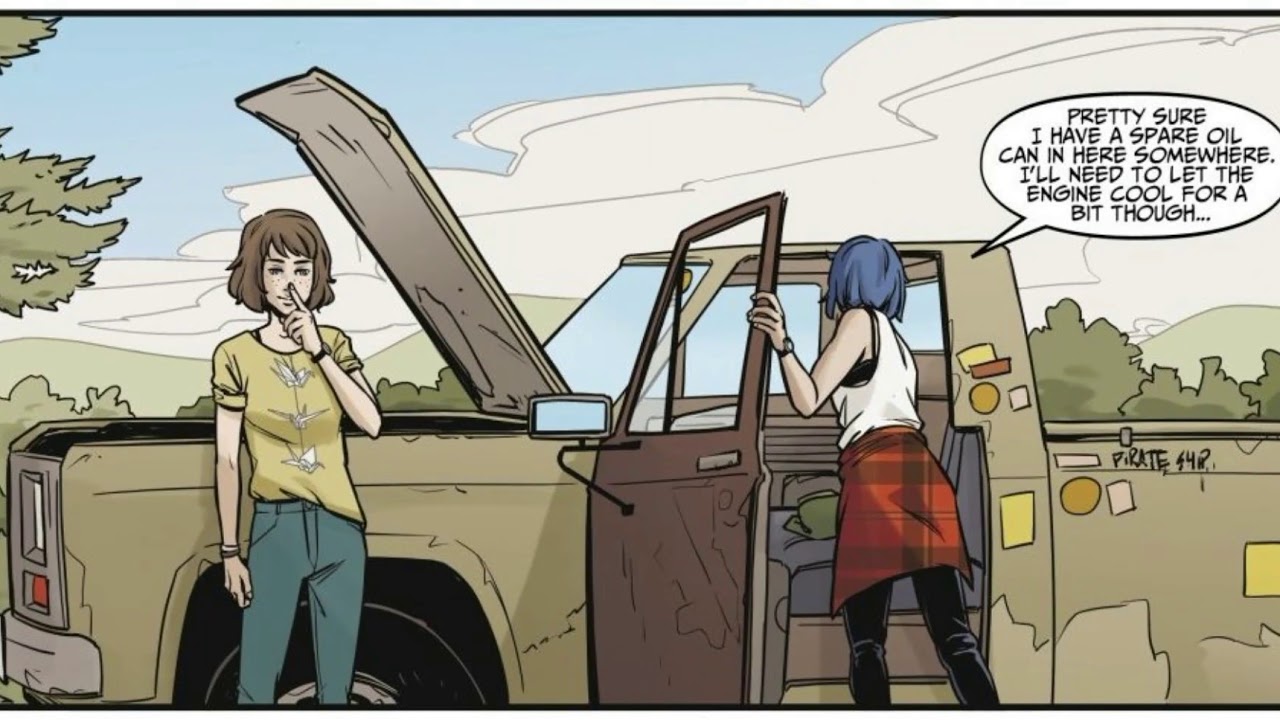 Life is Strange #2 from Titan Comics is the middle chapter in a four-issue miniseries dealing with Max and Chloe. Taking place after the “Sacrifice Arcadia Bay” ending, this comic tells the story of what it was like for the two friends after such an event. But as I stated in the last issue, Emma Vieceli and Claudia Leonardi use the opportunity to build upon some of the pre-established notions in the Life is Strange franchise of alternate realities. As a result, we get a mind-bending tale that is just as intense for us as it is for Max and Chloe.

I complimented Emma’s dialogue writing on the last issue. Her dialogue continues to be on point, and she truly gets these characters. Max and Chloe have a very unique cadence in the way they talk and sarcastically insult each other. They are in many ways polar opposites, but friendship is often more complex than surface details. Anyone with a close friend can tell you that you develop your own style of talking with them that is very different from the way you interact with others. Emma Vieceli really hits the nail on the head with this issue. She makes the dialogue between Max and Chloe feel like it is being read by their respective voice actors.

Speaking of Max and Chloe, this entire issue taps into what made the game great by focusing entirely on them. In the last issue we had the introduction of a few new characters, who are mentioned in this issue, but as a result, we spent several pages establishing them. Life is Strange #2 entire page count is devoted to Max and Chloe, with only a couple of cameos from characters in the game. This intense focus on the duo is what many people, including myself, came to this comic for. Much like Chloe, we want closure no matter how much it may hurt us.

Are You Cereal About That Cliffhanger?

I really liked Life is Strange #2 up until the very end. Following the beautifully tragic scene between Max, an alternate reality Joyce, and a Chloe that desperately wants to see her mom again, we get Max collapsing from her nose bleeds. We know from the context of the story that her nosebleeds have increased due to whatever is causing her to spring between one reality and the next without using her powers. However, the last issue ended with roughly the same cliffhanger. Max is having a nosebleed after an emotionally distressing moment, revealing to Chloe that something has gone wrong, and then deciding to go to Arcadia Bay. Even the games have a cliffhanger in which Max collapses from her nosebleeds.

It’s a Spider-Man problem. Just how many times can Peter Parker run out of web fluid? It’s a plot device established to bring up the tension and drama. It can be good to leave the audience with a cliffhanger caused by this device a couple of times, as long as it isn’t frequent. But after three or more times it becomes cheap, meaningless, and just all around a bad idea for a cliffhanger. Especially considering the moment this happened was already intense enough that it could have ended on Chloe getting closure, just not the way she expected or wanted. That’s a powerful cliffhanger and not just a plot device.

Wowser, Life Is Strange #2 Is Good

Life is Strange #2 in many ways improves upon the first issue and gives the audience an intriguing story with the characters they love from the game. The art and writing are firing on all cylinders showing off the talent these two creators have. It just faltered near the end with a cheap cliffhanger. But regardless, I look forward to the next issue. Tune in for Life Is Strange #3 coming soon under Titan Comics!

Chloe And Max Back At It Again
Life is Strange #2 continues to further the intriguing mystery from the first issue. With excellent writing and art, this issue is definitely worth the price of admission.
PROS
CONS
95
CLOSURE!