The Pirate Hunter, the swordsman, the first mate… Zoro was the first nakama to join Luffy’s crew back in Episode 2. At the time, the only thing we knew was that, compared to Luffy, Zoro was rather serious and even terrifying. He even threatened Luffy that he would kill him if he ever step between him and his dream. So how much has Zoro changed over the years?

Compared to the other nakamas, we don’t really know much about Zoro’s past. In fact, many fans believe we will find out more about him when the crew gets to Wanokuni, the country of samurais, which has been mentioned a lot. We don’t know who his parents were or even if they’re still alive. For now, the only thing we know is that he lived in a dojo where he trained to be the very best. Even at that age, he already had his dream very clear: he wants to be the best swordsman in the world. And to achieve that, he fought everyday against his childhood friend, Kuina. Suffering the loss of a friend (and rival) as Kuina was very hard on Zoro. Even more if we consider the fact that some fans believe that Zoro could have been in love with Kuina (and that now Tashigi reminds him of her). Probably my favourite thing about that backstory was how, contrary to Sanji, Zoro doesn’t really give a fuck about your gender. He just values someone for what they do and not for who they are.

Zoro is truly passionate about his dream. When he’s not sleeping, he spends all day working out and he gets very excited every time he has the opportunity to fight a strong opponent because that means getting stronger. Having to go down on his knees and beg for his biggest opponent, Hawk Eye, to train him for two years must have been very hard on him but that only proves his will to get better and to help Luffy no matter what.

Speaking of the Straw Hat captain, Zoro is considered to be Luffy’s first mate, vice-captain or call it what you want. It’s not really official and we’ve never seen either Luffy or Zoro ever mention it. However, other characters have. To be honest, I don’t see Luffy thinking about any kind of hierarchy in his crew. It’s something more… unspoken. Zoro was the first one to join the crew and many people believe that Zoro is the only one who really knows Luffy’s past with Shanks and the meaning behind his straw hat. Zoro has been with Luffy ever since they were in a small boat in East Blue. This proves Zoro is incredibly loyal. Another proof of this is his sacrifice in Thriller Bark where he made a deal with Kuma and took on Luffy’s pain, or when in Water 7 he said he wouldn’t forgive Usopp unless he apologised because they had to have some respect for their captain.

When it comes to fighting, Zoro is part of what is known as ‘the monster trio‘ (Luffy, Zoro and Sanji, considered to be the strongest members of the crew). Because of that, Zoro has been always compared to Sanji, those comparisons only fueled by their own rivalry and constant arguing. Some people also believe that Zoro might be stronger than Luffy, since we know that Luffy’s weakness are pointy and sharp things. However, this is a shonen, and there’s a reason why Luffy is the protagonist and the captain: he has to be the strongest member, especially if he wants to be Pirate King.

However, as we previously said, there’s no one in the ship more ambitious than Zoro. Zoro wants to achieve his dream so badly he is even willing to give up his life for that:

“When I decided to follow my dream, I had already discarded my life.”

“If I die here, then I’m a man that could only make it this far”

Personality-wise, Zoro is a bit tough to figure out. At the beginning of the series, even though he was feared for being incredibly strong and ruthless, he was also cheerful. Can you remember the last time we saw him laughing? Must have been the East Blue. In Skypiea, we also have that glorious moment in which he plays Tarzan. Over time, he’s less and less cheerful. Maybe because, with the addition of new nakamas, Zoro has been assigned the role of being the serious one. Zoro is also pretty blunt. He was insensitive when the others were sad about leaving Vivi behind. Next to Robin, he also seems to be the more willing to kill in the crew, although we’ve never seen him doing it because Luffy doesn’t like that. There’s something that he’s always had though: his awful sense of direction.

At the end of the day, Zoro is a strongly determined man who could scare anyone away with just a look. However, there’s no one Zoro respects more than his captain, and he would give anything to protect his crew. For that, everyone considers him to be the second in command and Luffy’s best advisor. 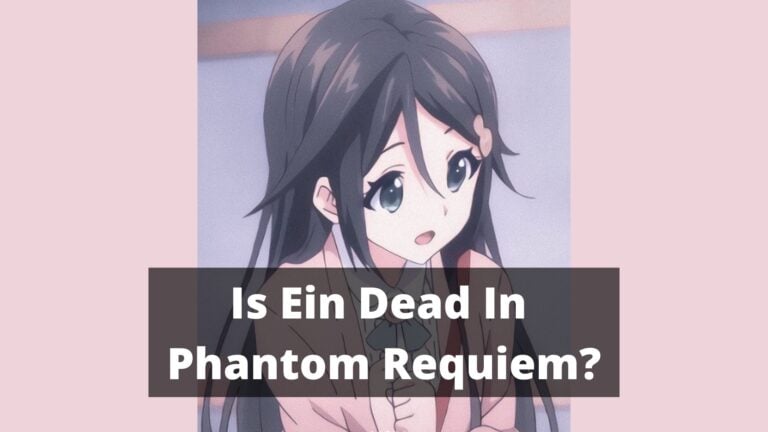 Is Ein Dead in Phantom Requiem? Phantom Requiem, the popular zombie survival game by Ein, What will happen to them now? Find out in this exciting blog post. Ein is one of the lead characters in the Phantom: Requiem for the Phantom anime series. Despite coming off as a cold-hearted Phantom, there is something about…