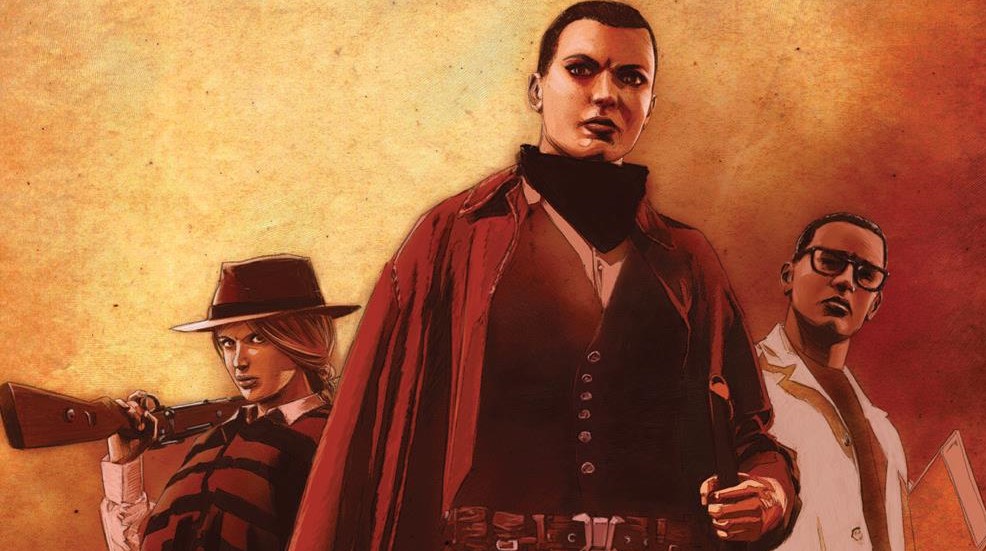 Lazarus: Risen #4 takes us away from the frontline conflict of The Conclave War and back in time a little bit. The focus is now on two side characters, Casey Solomon and Michael Barrett, and a short story focuses on Jonah Carlyle after the outbreak of the Hock Flu. While this change of perspective is a bit jarring at first, we do know we are heading into a new arc in the next issue, so this setup will inevitably pay off. This gives us a chance to see something that Greg Rucka and Michael Lark have said they had planned for a long while.

What Would You Ask God For?

In the miniseries Lazarus X+66, we saw Casey finish the training required to become a member of Dagger Team Alpha. In the previous issues, we have seen her fight alongside her God, Forever, on the frontlines of The Conclave War. Here in Lazarus: Risen #4 we get to see her official promotion and a very special ritual that humanizes both Forever and the Dagger teams in a unique way.

Daggers are the right hand of their Lazarus. They are the Lazari’s personal army, who will live and die on her orders. For all intents and purposes, Forever is God to them. And when God offers to give you one wish, what exactly do you say? That is the predicament that Casey finds herself in. Each Dagger asked for something that only Forever could provide. One asked her out on a date, another asked to get a lock of her hair, another asked to train in sword combat with her, and so on. But what is Casey’s one desire that not just a member of the families, but the family’s Lazarus can provide? Revenge.

Tying back into one of the older arcs in the first volume of Lazarus, we see that Casey wants revenge on the people that murder Leigh Barrett. Her death has stayed with Casey all these years, not just because of the loss hurt, but because she feels responsible. Leigh had left the tent so that Casey and Michael could satiate their teenage desires and it got her killed. So how better to ask you to absolve yourself of your sins than your God?

What Can Change A Man?

The other half of the comic portion of Lazarus: Risen #4 is dedicated to Michael Barret. He has been put in charge of releasing Forever from her genetic bonds of loyalty by Johanna. While I still question Johanna’s intentions, there is no doubt that a free Forever is good for the world at large, at least we hope. But being so closely involved with the family is changing Michael, just like it’s changing Casey. They are becoming collaborators in a sense, helping their oppressors because they have been given an extra slice of privilege. We even see this demonstrated when Michael threatens Cady Rosales, the daughter of the man Forever murdered way back in the first-ever issue of Lazarus. Michael has changed and perhaps not for the better.

Conversely, we have Jonah Carlyle or as he would prefer to be called Jonah Ker. We have seen Jonah grow over the course of the series, from starting out as an entitled brat to becoming a hardened survivor. Now, he is a father who has lost everything he holds dear except for his son. His wife died in the recent outbreak of the Hock Flu. Of course, unknown to anyone is that he is immune and by consequence so is his son. If someone finds out, such as the ending of the backup short story, they won’t use his Carlyle DNA to manufacture a cure. No, they will ransom him for money. So, he runs, and I hope he makes it with his son. He’s changed man, and he has changed for the better.

Lazarus: Risen #4 Is A Hard-Hitting Issue

While I’m dating this review, it is worth noting that this comes out during a very real pandemic in the world, COVID-19. While the Hock Flu is a plot point that has been in development for years, it hits all the right notes for being incredibly relevant for today’s crisis. This makes Lazarus: Risen #4 both a wonderful but hard to get through comic. Please check out this series even if it makes you uncomfortable. Besides the amazing characters, it has some very clear allegories to the real world that are important to understand. Family above all!