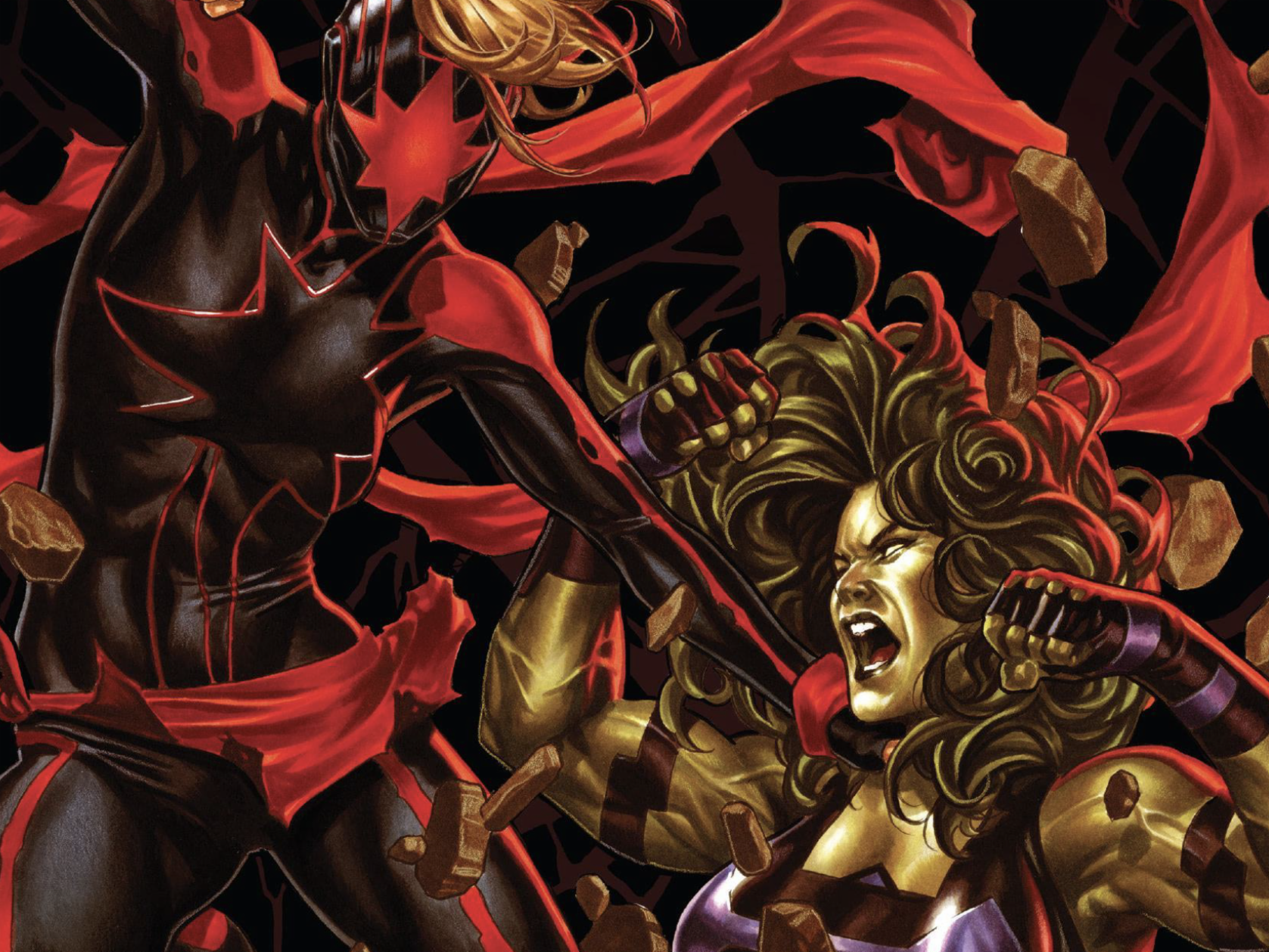 There’s nothing like a pile of naked Avengers to start out the next issue of Captain Marvel. Captain Marvel #14: The Last Avenger Part Three moves this five-part (we previously said four which is incorrect) arc along very nicely. Written by Kelly Thompson, who never disappoints, this Captain Marvel run just keeps getting better. Lee Garbett and Mark Brooks‘ art is also absolutely astonishing, as always.

In the previous issues Carol had taken out both Iron Man and Thor, but still had the rest of the team to go. We also weren’t sure if she was really killing them or not. That is, until the end of the last issue, when fractions of her plan were revealed to us.

In Captain Marvel #14 Carol continues her plan to kill the Avengers. Except this time around, we know she’s not actually killing them, but instead bringing them to a whole-in-the-wall singularity to keep them out of Vox’s view. There’s a closet in the singularity, but it isn’t filled with shirts and pants. No, it contains the dead bodies of the cloned Avengers. Yes, it turns out that S.H.I.E.L.D. had all of the Avengers cloned at one point. Now Carol is using them for her plot against Vox.

The Clone-Vengers (as I’ve dubbed them) raise a lot of questions. When did Shield make these clones and how? Did Carol literally have to kill a bunch of clones? When she killed them all were they awake, or were they in a weird clone kind of trance? Will Vox be able to tell if they’re clones if he looks into their DNA? There are a lot of unanswered clone questions, but it doesn’t seem like we’re going to get them answered. It seems like it’s more of a mysterious backstory kind of deal that Marvel doesn’t want to go in-depth on, which is interesting too. There’s a good balance between having lots of questions and not being sure if we want them answered.

The last few issues were beginning to worry me. Carol Danvers is by far my favorite character in all of DC and Marvel. There’s something about watching your favorite character turn evil that is so unsettling. I would literally grip the page (digitally?) and worry for her humanity.

However, as her plan to stop Vox has been revealed, she’s regained a lot of that missing humanity, if not more. Her plan is completely rooted in her humanity. The only reason she’s doing anything is because she wants to save the people that Vox has planted bombs on. It’s almost sad that Tony and Thor don’t seem to understand her drive. Or I suppose, she didn’t really give them that much information on the matter.

The villain of this run is named Vox, and Captain Marvel #14 gave us more of an in-depth look at his character. Not only is his character design incredibly cool, but he also talks to himself. There’s one speech bubble that comes out of him that’s normal and another that is black and green. It’s almost like he’s talking to something that’s possessed him, or something that lives inside of him.

It reminds me of Deadpool in the way that he has multiple personalities all talking to each other at once, and they’re all in different styled bubbles. That detail alone made me want to know more about Vox’s character.

Should You Read Captain Marvel #14?

Yes. Yes, you definitely should. Kelly Thompson is a phenomenal writer in everything that she does. She has a way of making each character’s voice sound so unique and on point with the character’s history. The way that she writes Thor is hilarious and perfect, and she is the only person I want to write Captain Marvel. The art is beautiful, especially with Captain Marvel’s new costume and makeup. This five-part arc is so much fun and so entertaining, so you should definitely read it if you’re a Captain Marvel fan.

Carol’s Plan Is Revealed In Captain Marvel #14
PROS
Amazing writing and art
Thor is hilarious
The naked pile of Avengers was pretty good too
CONS
Made it seem like this issue was about She-Hulk, but she's barely in it
Only a quick fight with Black Panther at the end
96
SHE HULK?