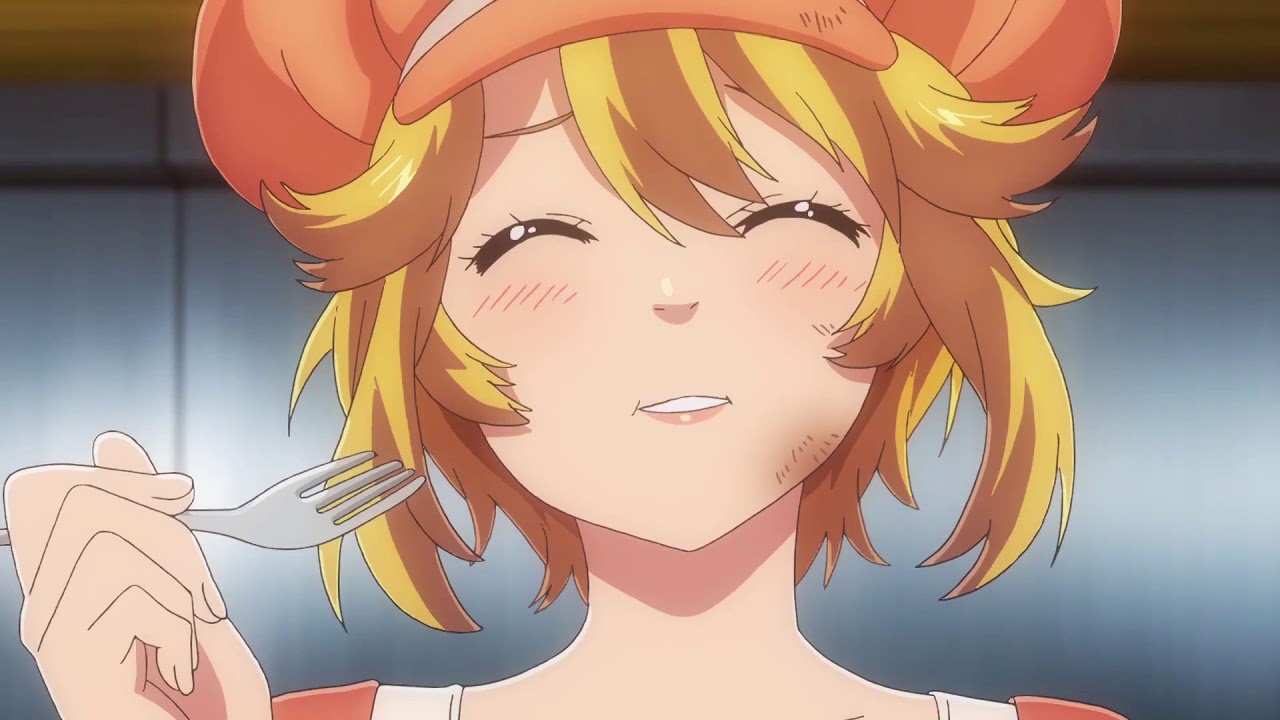 Care To Dine At A Restaurant To Another World?

Imagine being tucked away in bed trying to sleep through your Saturday morning when suddenly a bright light emits from your closet door. You check it out expecting aliens; instead, you find out that your closet is now a portal leading you to another world. It’s a world that’s filled with dungeons and dragon-type characters (like Narnia). Pretty cool consolation prize, right? However, instead of being transported to a death-trap of a fantasy realm like any other fictional premise, this portal actually leads you to a nice little restaurant filled with Japanese-Western food. That, dear readers, is the Restaurant To Another World (2017). Before I begin my review this time around, I’ll be the good Samaritan and warn you that there are minor spoilers in this article.

What’s Restaurant To Another World About?

Based on the book series of the same name, it is a series of compiled stories all taking place within a mystical restaurant known as “Nekoya.” For the most part, Nekoya is a literal hole-in-the-wall that simultaneously functions as both a bridge between two worlds as well as an eatery. The series’ chef and owner of the place, “Master,” is a descendant of a former hero from the other world. His grandmother was a talented warrior who fell in love with a human. It was only after an evil Demon lord “banished” her into the human realm before she could finish him off. (Like Samurai Jack.) While both the shop and owner appear normal, the protagonist seems to have inherited some of his grandmother’s magical abilities. He’s able to open portals on a weekly basis to create a waypoint for dimensional travelers.

Thoughts On The Food & Setting

This series is basically what Narnia and Dungeons and Dragons would look like as an anime. If someone decided to open a Japanese-Western restaurant over there. Every species in the “other world” has specific dietary needs and preferences that require special catering to. Elves in this world are vegan, half-elves are either omnivorous or mostly vegetarian, and beast-people plus lizard-folk are all general meat eaters. Humans are a little mixed-match of everything. Their tastes differ based on the region they’re from and status of class in society.

Every character has a particular fixation with a special “Japanese-Western” dish and each episode shows their story behind that fixation. I’ll be referring to the human realm as “our world,” and the fantasy realm as the “other world.” Nekoya is a restaurant from “our world” that opens its services to the fantasy realm once every week through a limited number of portals. (It helps for others to think of this like how Yūko’s shop functions from xxxHOLiC.) The reason why the fantasy realm characters all refer to the place as another world restaurant is because our methods run more advanced (ergo other-worldly) from anything they’re used to. The title could also work in vice-versa with viewers as they’re also experiencing “another world” unfolding before them through the same restaurant.

What Happens If You Decide To Stick Around?

The restaurant has multiple portals that transport you to another world (our world) once every Saturday, or as the characters like to call it: the “Day of Satur.” These portals are scattered worldwide in the fantasy realm and are limited in number. So most of the customers who visit the area are all considered regulars. If you’re lucky enough to find an entry door to the place, you are only given about a day’s access to it before it completely disappears from the “other world.” Some of the characters who discover the portal either decide to share its location with the rest of the world or greedily keep it hidden to themselves; in favor of building a hidden cellar or door around it.

So far, no character in the series has stuck around past the time limit. We aren’t given any context on what happens to them in that angle. I just assume that they’re stuck in the normal world for about a week or so before they’re allowed to go home. The chef actually lives on the floor above the restaurant and readily has some supplies available for all his employees. So, I guess they could just freeload off of him for a week? (I also assume that the chef never has to pay any property tax in the “other world” since the place doesn’t technically “exist” over there.)

What I Love About This Show

This series likes to define all “Western” byproducts as everything that didn’t originate in Japan. The theme plays a huge part in shaping the viewer’s perspective of the fantasy realm as it simplifies the notion that all otherworldly people and items are “Western,” and thus not of any conventional familiarity to those in Japan. While I can’t confirm how true this statement is in real life, the idea is still rather amusing to explore throughout the series.

I love the worldbuilding in this anime as everything about the other world is fascinating to learn about. This anime is all about the small details. The series takes place in a medieval-fantasy setting with a modern economy so everything from the menus, currency, and language of the restaurant is all hyper-focused on maintaining accuracy with the other world’s lore. Characters use gold and silver to pay for their meals instead of paper money. And the menus are also all written in a unique form of English; or as this series calls it, the “Western” language. In which case, even the most fluent of viewers may be thrown off by some of the other world’s outdated lingo.

The “Western” characters of the other world have a different set of names and versions of human world food. For example, “shrimp” is referred to as “” throughout the series, and potatoes are also known as “cobbler’s tubers.” “” in the fantasy world is considered a delicacy to humans as only the rich seem to have regular access to it due to its scarcity in some areas. Whereas “tubers” are what most of the lower income characters consume for survival. In which case, they often despise eating it because of their lack of knowledge on how to prepare or season it on a low-income basis. (Potatoes in this world are kind of like how “lobsters” were once treated in David Foster Wallace’s Consider the Lobster.

Racism and prejudice also contribute to a character’s dining experience as their behavior differs when they’re around a different species. Information about the other world’s past histories really mixes things up for this series as there’s a division between characters based on their kind’s former war experiences. Furthermore, the opposing multitudes of politics, cultural beliefs, and dietary needs for every species also keep the character dynamics interesting. Elves, for example, are all vegans that hold some level of snobbery towards meat eaters. Their way of life has made them weary of all human and beast-type characters as they can’t stand picking up the scent of meat, whenever they dine near them.

Now, I’m not usually a big fan of having “real-world” issues in my anime. They’re usually needed for effective storytelling but they often leave a bad “taste” in my mind. The series does a nice job of including conceivable concepts of racism into the story. It does this without overwhelming the viewers with constant reminders of how bad the real world is. The characters don’t project their disdain for other species through hardcore discrimination or violence. However, they do express mild discomfort in seeing other racial behaviors unfold before them. This series actually makes the issue understandable in a realistic way. A person’s disgust for another species is built by years of historical conflict and child-rearing, instead of actual hatred for their genetic differences.

Before I end this article, let’s talk a bit about character development. Other than the episodes focused on establishing a character’s backstory, there’s not a lot of extra depth to everyone outside of the usual “anime personality.” Basically, everyone covers the surface generalizations of how typical “anime characters” are expected to behave in an anime. The series focuses more on rotating its characters based on the episode’s menu items. It doesn’t include them in every story, so we only learn a small portion of each character at a time. There are a few exceptions to this as most of the earlier introduced characters are better developed this way. I just wished we could have seen more like them.

Aletta, for example, has an elaborate backstory despite being one of the restaurant’s “helpers.” Her character deals with most of the political issues going on in their world as she experiences great difficulties in finding employment due to her demonic heritage. She’s required to hide her horns outside of work at all times as all demons are ostracized by mankind for a war that happened decades before the start of the series. She is also one of the few characters I know in anime who practices religion on a regular basis.

(Which, I might add, is rare to see among demons in fiction since the idea kind of contradicts their existence.) I wanted to see more creative spins like this happen with the other characters at Nekoya. I was disappointed when none appeared. This anime is a short series, so I can’t blame anyone for not having extra room for character development. Maybe I should start praying for a second season?

The dialogue gets a little awkward at times, particularly with how characters react to their favorite meals. It’s not bad, but it does feel exaggerated. The customers are just rehashing something they read straight off of a menu. It’s great that they enjoy what they’re eating, but I don’t need a narrative of how they choose to worship every flavor. I could be bitter about not getting to eat what they have since I watched this on an empty stomach.

Ultimately, their exaggerations shouldn’t deter you from enjoying the series as a whole. If anything, the cheesy conversations only add to the anime’s quirky “charm” as it helps establish a friendly atmosphere among the sea of different characters. The same could also be said about how the regulars like to give everyone nicknames based on their favorite food. I thought that was a nice touch to the series and liked it a lot.

Care To Dine At The Restaurant To Another World?

So, a Restaurant to Another World. What can I say? It’s a “cute” series. This anime isn’t all that spectacular in comparison to some of the other shows out there but it has its charm. This show is a perfect choice for anyone who happens to love food and anime; however, I highly recommend this series for anyone who loves seeing their food animated inside anime. The high quality artwork and animation of every dish will seduce you instantly, and leave you wanting more by the end of the series.

You can find the entire series over at Crunchyroll. There are only twelve episodes in total so you can binge it all in under a day. The show shouldn’t take more than a few hours to finish and there’s a lot of interesting ideas on how a “modern restaurant” would work in a fantasy-medieval setting. Nonetheless, if you’re interested in learning more about the franchise, you can find some information about the book series and manga adaptation over here. The books (Isekai Shokudo) are officially licensed for English translation and its first volume is slated for digital release this upcoming June; and I, for one, am eager to read it. If you’re interested in reading any more of our Animanga reviews, you can find them all here at The Daily Fandom.