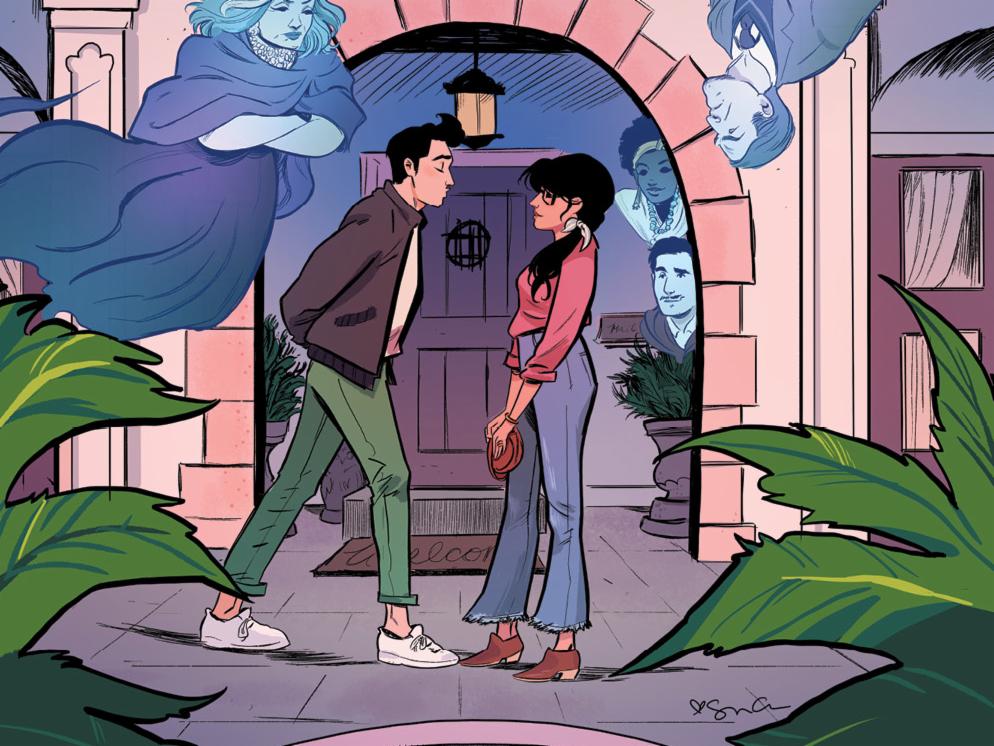 Can You Fall In Love With A Ghost In Ghosted In LA #2?

Ghosted in LA is back with Ghosted in LA #2 and I’ll be honest my mild attraction to Ricky is becoming more and more intense as these issues go along. Can you fall in love with a fictional ghost? Anything is possible in 2019. Last month, we left Daphne moving into a new house with ghosts. Her boyfriend broke up with her, her roommate is a little too emo for her, and her best friend is kind of non-existent at the moment… what’s a girl to do?

On this issue, we get a classic love-tinder-swipe story. Not really, but he could’ve been great on Tinder with those pick-up-lines he was throwing down. We have the same team behind this series; Sina Grace, Siobhan Keenan, Cathy Le, and DC Hopkins. (As we will be covering the entire series issue-by-issue, they will spoil some events from previous issues; in this case, Ghosted in LA #1.) As per usual, we would like to give a shoutout to Michelle Ankley for design, Michael Moccio for assistant editing, and Shannon Watters for editing this series.

Let’s Catch Up From Ghosted In LA #1

The first issue we met with was an introduction issue. We needed to understand how Daphne got to where she was and now the story can begin. She had a falling out with her best friend, her ex-boyfriend was trash, and now she’s living with ghosts (and one of them is mighty cute!) We begin the second issue with Daphne having a bit more confidence.

You can tell by her body language and how she is talking with Brint; and even though she sees her ex-boyfriend flirting with a bombshell, she still decided to make the usual decision: Go on a date with a Tinder swipe you made when you were wasted one night. (Not really, but, come on, Brint?) Even though she very well knows this is a mistake, she’s like “Why not?”

Which is what any girl would say when they see their recent ex flirting with Megan Fox. What I love about Daphne is that not only does she have “balls” as Brint says, but she’s like an awkward cute girl that doesn’t know what the hell she’s doing. (Neither do I, so I love her character.)

Ghosted In LA #2 Gears Up To Showcase Incredible Writing…

The narrative throughout Ghosted In LA #2 is one of my favorite aspects. We’ve said it before and we will say it again, the writing is heavenly. While these first two issues are gearing up towards what we will see in issue #3 and after, I am excited about where this story can go. There are so many plots, so many characters, and so many ghosts. Daphne, throughout this entire issue, had me living. It is such an odd but very interesting thing to see yourself in a fictional comic character, but that happens with Daphne quite a lot. Even with the reaction of her ex and Brint.

& To Showcase The Incredible Art!

Bouncing off of the writing, let’s talk about the magnificent art, lettering, and coloring. Behind these, we have Siobhan Keenan, Cathy Le, and DC Hopkins. I always talk about the showing and telling aspect in my reviews if you have read them before. Writing normally covers the telling and the art team showcases the showing aspect of the comic.

Both of these together typically make a beautiful comic. Now Ghosted In LA #2 does this remarkably well. The color palette is intriguing, to say the least, it is the blues that make me weak in the eyes. When it comes to the lettering, DC Hopkins is having so much fun with the style choices we have in Ghosted In LA #2.

(^ Can we talk about these gorgeous pages for a second? ^)

A minute feature we love is the blue speech bubbles that occur when the ghosts are speaking. It is a minuscule aspect, but it’s so interesting to have that choice and make the ghost’s speech bubbles a different color. We wouldn’t have thought about having that because the detail is something that might be glossed over. However, I love it. I think that aspect adds to that construct of “ghosts” versus “humans” speaking and you can keep up with who is talking. Not that you wouldn’t anyway, but it’s nice to have because I can change the voice of the characters in my head.

Can We Have Issue #3 Already?!

This is a series that we will follow until the end of the depth, whenever that may be. The team behind this comic truly shines and excels with one another’s strengths and you can see that. Like I have said before, this comic can go to so many places and do so many things. It reminds me of Snotgirl and the concept being vague but not, at the same time.

You have a clue about what’s going on, but at the same time — anything is possible. That is what Ghosted in LA reminds me of. I am having so much fun reading it and gushing about it. If you haven’t picked it up for NCBD, please do — catch up on the first issue and then read the second (you won’t regret it).

Ghosted In LA #2 by Sina Grace, Siobhan Keenan, Cathy Le, & DC Hopkins.
PROS
RICKY IS LIKE SO GORGEOUS?!
BRINT WAS HILARIOUS, WE ALL KNOW A GUY...
THE INDIE SCENE WAS CLASSIC (ESP FOR LA'S SCENE)
THE COLORS ARE SO VIBRANT AND GLORIOUS
SINA GRACE'S WRITING IS INCREDIBLE
FEELING THE STORY AND WHERE IT IS HEADED
CONS
100
DAPHNE & RICKY SITTING IN A...