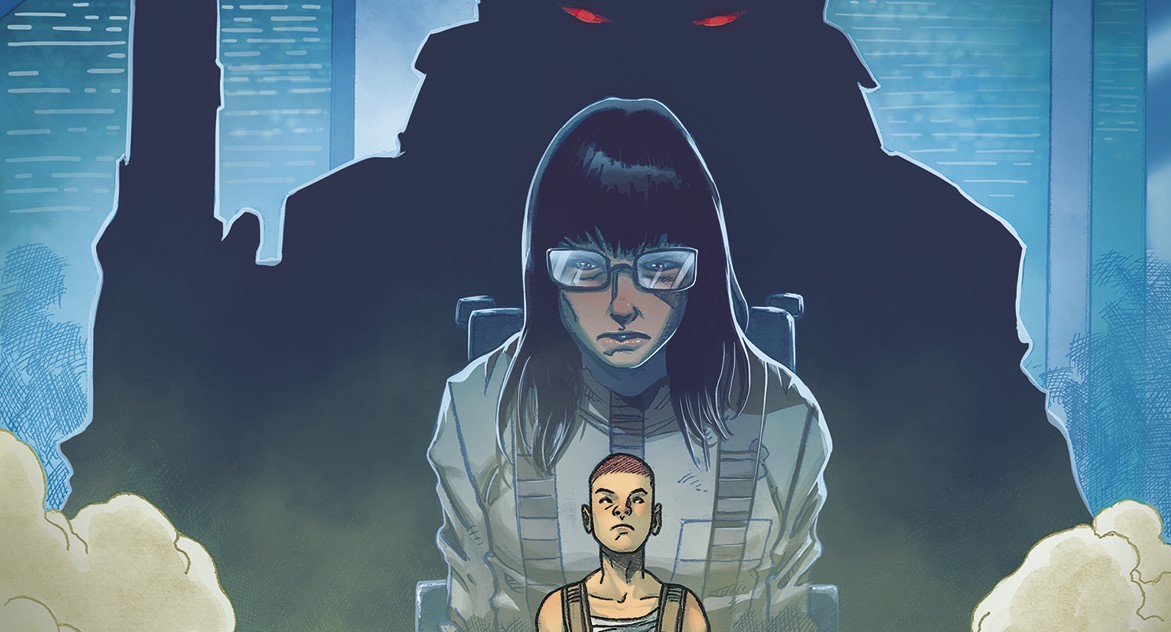 Blade Runner 2019 #7 takes the series in yet a new direction with a jaw-dropping twist. The previous issue left both Cleo and Ash in separate but very difficult situations. Future issues promised to show us the fallout of these situations and the choices they made. Let me just say that Michael Green, Mike Johnson, and Andres Guinaldo certainly delivered.

A Tale Of Two Blade Runners

Blade Runner 2019 #7 picks up where the previous issue left off with Ash becoming a Blade Runner once again. This time, however, she is a Blade Runner not by choice but by necessity. She was given access to the material required to activate her back brace again. She can walk, but at what cost? She’s hunting down the very person she broke her oath to protect, Cleo. And with the ever-watchful eye of fellow, and more volatile, Hythe on her can Ash truly get away with Cleo again?

In their non-stop investigation to find Cleo, the two Blade Runners clash. Ash has been out of the game for far too long, the rules have changed. Blade Runners are now no longer affiliated with police departments. They are now hired by private corporations as freelancers, working from paycheck to paycheck. This isn’t a task force designed around retiring rogue Replicants anymore, this is about the bottom line for the corporations. It’s business, they literally deal in death now.

Workers striking? Send in a Blade Runner! A riot interrupting sales? Send in a Blade Runner! This has very interesting parallels to real life, such as when private military organizations were used to deal with things like this in the past. The Pinkerton Detective Agency used to send agents to discourage worker strikes and were often hired by major corporations to keep the workers in line.

Cleo’s portion of Blade Runner 2019 #7 isn’t given as much focus as Ash’s but is still intriguing enough. The clear worker’s rights message becomes even more interesting when you add in the conversations between the combat models and mining models of Replicants. Paddy doesn’t want to lose his eye even though it may help in the long run. They’re basically escaped convicts and their serial numbers reside in their eyes. The combat models quickly jump at the opportunity to be free of their numbers and hopefully everything else as a result.

Paddy refuses, he wants to see the world as it is now completely whole. He isn’t afraid of death; we have seen first-hand a few issues back how hard it is for the mining models. Perhaps for him, all he cares about is spending what little time he has left with someone he cares about instead of worrying about how to survive. And so Cleo and he attempt to find a way to Arcadia. Yep, the same one that Ash read about to Cleo when she was younger in that flashback in the last issue. Some dreams are worth dying for I suppose.

In the end, we get a major reveal in the form of Isobel Selwyn, Cleo’s mother. How she is still alive since she was an early replicant without an open-ended lifespan is a very good question. And what this means for Cleo and her new mother figure in Ash is up in the air. But it is certainly a hell of a way to end the issue.

Blade Runner 2019 #7 keeps your attention with great character work and excellent delivered drama from natural conflicts. Ending with one amazing cliffhanger that I can’t wait to see the aftermath of. Wrap it around some interesting parallels to real life and you have yourself a great issue in this vastly different but intriguing arc.

Can Ash Find A Way To Reason With Hythe In Blade Runner 2019 #7?
PROS
CONS
90
Unexpected Reveals