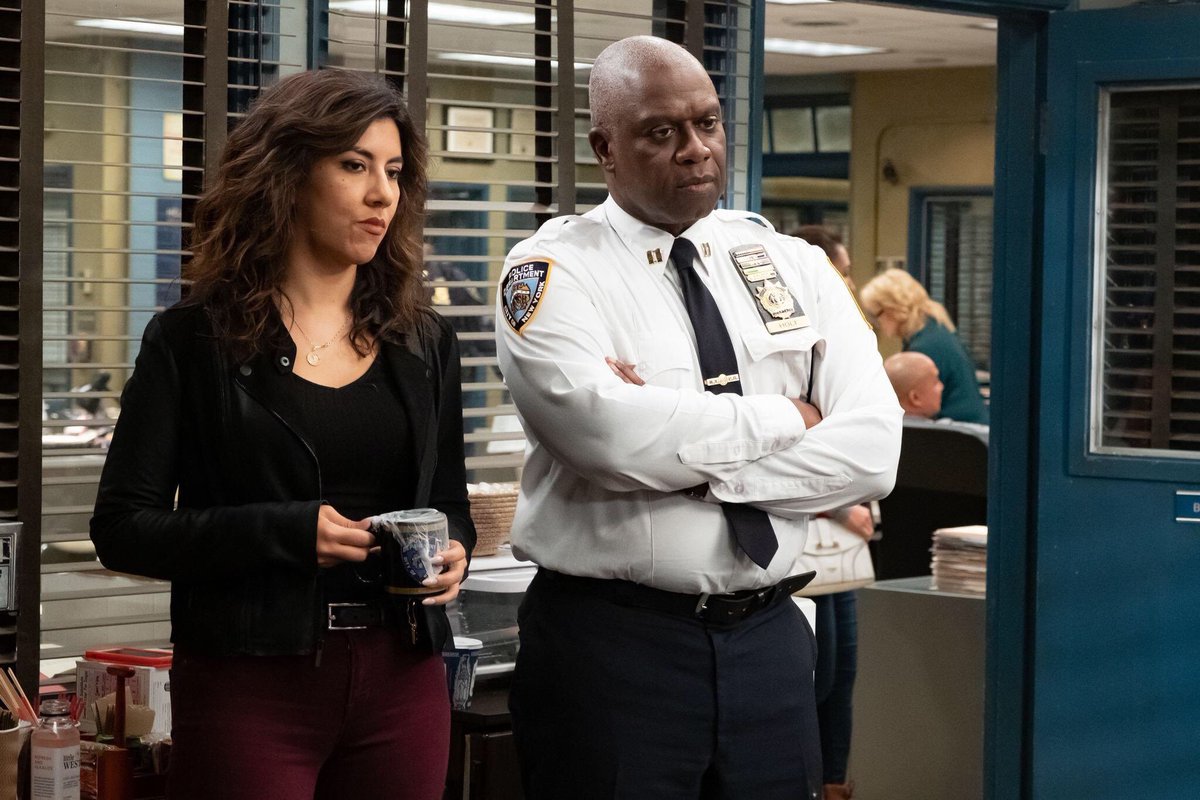 Presenting OTP Tuesday! Each Tuesday I will introduce you to a new One True Pairing! Tune in each week to find out which fictional couple you need to agonize/squee over next. For June, I want to share some love for queer content out there, so this week have a BROTP: Rosa/Holt.

Rosa/Holt refers to Rosa Diaz and Raymond Holt, two of the primary characters in Brooklyn 99. They both work for the 99th precinct police department.

Rosa Diaz is one of the central characters in Brooklyn 99, a detective at the 99th precinct. At the start of the show, Rosa is a bit of a mystery. She is closed off, keeping her colleagues at arm’s length, and valuing her privacy above all. She’s presented as a bit of a hot badass: all leather and knives and motorcycle – but not a lot of personal detail. Over time, as the 99 becomes more of a family, Rosa opens up and lets her friends into her life.

Jake Peralta, the protagonist of the show, is already been close(ish) with Rosa, having attended the police academy together. But Rosa starts to open up to the others as well. Amy Santiago, the polar opposite of Rosa as a goodie-two-shoes teacher’s pet type, clashes with Rosa at first, but they soon find common ground. Charles Boyle starts the show with an uncomfortable, obvious crush on Rosa, but as Charles moves on, they become close friends. Charles is someone Rosa can be open with – and in fact, is the first person on the squad who she comes out to as bisexual.

Rosa’s coming out helps move her character forward, as we see her open up more. She faces a terrible task in coming out to her parents, who are conservative and admit they would prefer Rosa be Jake’s mistress rather than be gay. But it’s not all doom and gloom. Rosa’s girlfriend becomes a fun background character; a running joke about the mystery woman who Rosa is dating until she finally shows up in season six. With more focus on her personal life, Rosa softens into someone knowable. Though that’s not to say she ever stops being a complete badass.

Captain Raymond Holt is the newcomer when Brooklyn 99 starts, coming in to replace the former captain of the 99th precinct. Holt’s no-nonsense, by-the-book standards set him up to clash with lackadaisical Jake. But the show doesn’t go into a stereotypical “loose cannon cop clashes with strict captain” route. Instead, the show gives us a developing relationship that allows both Holt and Jake to grow. This allows the precinct to become a family under the watch of “dad” Holt.

Holt is not the strict, brutal superior often shown in police media. He has a way he believes things should be done, but it’s not adhering to slavish rules. Rather, Holt has a lot of experience – being a gay, black cop in the 1970s really shaped him – and he knows what will and won’t work (though the 99 throws this for a loop every now and then). Holt is also constantly working towards improvement, with the ultimate goal of becoming police commissioner and ushering in change to the NYPD and the often corrupt, oppressive justice system. But that doesn’t mean he loses track of what’s really important: the work he and his team do in Brooklyn.

Despite his dry and stoic personality, Holt is the jokester in both his relationship and among his husband Kevin’s colleagues. His love of classical music is a recurring joke, showing his disconnect from the young people he works with, though Holt uses slang from time to time. Overall, the feeling Holt gives is an out of touch but ultimately good dad, who wants to make things better. He supports his team and helps them become the best they can be (especially Amy, who is desperate for Holt to mentor her). Captain Holt made the 99 a better place.

Rosa/Holt normalizes relationships without a romantic component for queer characters. And that’s important, and for this Pride, I think it deserves celebration.

Birds Of A Feather

One of the things that makes Rosa/Holt such a good BROTP is the fact that they had a unique, rich relationship before Rosa came out as bisexual. This isn’t a case where the only two queer characters stick together because they are separate from the main cast of characters. No, Rosa/Holt developed purely out of the similarities between the characters other than their sexualities, giving us a fully developed friendship. Rosa and Holt are very similar in the way they handle emotions, and their similar personalities lead to an engaging friendship.

From the start, neither of them are very outwardly emotional, preferring to keep things hidden. This draws them to each other as two stoic people surrounded by a group of very emotional colleagues. Rosa’s closed off persona makes her the perfect person to deal with Holt. As a result, they often work together, whether on police matters or anything else. At one point, Rosa dates Holt’s nephew Marcus, a very emotional man. Rosa and Holt are able to bond over not understanding him. Holt even takes Rosa’s side when she dumps Marcus, seeing nothing wrong with the completely unemotional approach she took to ending the relationship.

The already established relationship between Rosa and Holt adds an extra layer of meaning to the way Rosa’s coming out is handled. Rosa knows that she has a good solid mentor in Holt, who has been out for a long time, no matter the repercussions to his career. Holt is able to support Rosa when her family rejects her, telling her how important she is and the impact that her coming out has on the community. It’s a good moment that reflects all the best platonic relationships: Holt is Rosa’s mentor, but also becomes her found family and friend.

Rosa is a Latina woman in a racist, sexist field of work. We see the impact of her Latina heritage when dealing with her traditional parents. Rosa is bisexual, and we see her in relationships with both men and woman. The impact of seeing a character actively and openly say the words “I’m bisexual” was groundbreaking for many, including myself, since often bisexual characters are kept ambiguous (they “don’t like labels” or whatever). Holt is an openly gay black man, who has faced discrimination on multiple fronts, especially as a cop. He has seen firsthand the oppressiveness of the justice system and decides to make it a better place for future marginalized people.

The fact that Rosa and Holt both exist in the same show is amazing. Yes, they are very similar in some ways, but they are also unique people. We get two types of queer, with distinct and clear labels. Neither of these characters is white, showing that not all queer people are gay white men. They are able to love and support each other without it being romantic. It’s a beautiful thing to witness.

Season six of Brooklyn 99 just ended, thankfully without a major cliffhanger this time. In the season six finale, the team faces a massive challenge: taking down Commissioner John Kelly, who beat Captain Holt in the race for commissioner. But that’s not why they have to defeat Kelly: he is violating personal privacy and overreaching police authority by recording conversations. Kelly represents the dark truth of the justice system: that police often violate basic rights in the pursuit of “justice”. It’s a heavy subject and one that Brooklyn 99 works hard to show honestly.

At the same time, they are facing losing one of their own: Sergeant Terry Jeffords is being promoted, but due to budget concerns, it means a transfer. Both plotlines resolve at the same time: the squad takes down Kelly, putting a new commissioner in charge who demotes Holt as the resolution of their ongoing petty feud. So at the end of season six, things are pretty okay. No one is in prison, or undercover. The 99 is still together, even if things are changing.

Brooklyn 99 has been renewed for a seventh season (a fun turn after its early cancellation post-season five, which prompted a public outcry of support – clearly it worked). We don’t know much about the next season, including when it will premiere or how many episodes to expect. But what we can expect further exploits of the 99th precinct, including more excellent Rosa/Holt dynamics. Season six gave us the fun “Holt meets Rosa’s girlfriend” story, which shows how important they are to each other. Maybe next season will see a development in Rosa’s relationship? One can only hope (god bless Cameron Esposito), and it would give an interesting story for Holt, as a married gay man, to support Rosa.

Rosa/Holt is a beautiful canon BROTP. The whole 99th precinct is, honestly, a BROTP – they are a really good found family who loves and supports each other. But within that family are, of course, unique and interesting relationships between all the various characters. The Rosa/Holt dynamic is among the better ones of the show, for many reasons. From the start, Rosa and Holt had a connection as two stoic, closed off but still awesome characters. Rosa clicked with Holt early, and they had a lot of really great moments supporting each other: Rosa having a pregnancy scare, and Holt covering for her with Marcus; Rosa and Holt trying to figure out the best way to dump a guy; Holt talking Rosa out of running away from the 99 – all great stories built on the relationship between these two characters.

But they grow closer when Rosa came out as she and Holt had yet another thing in common. Holt was able to support Rosa through the process, showing her how important her actions were. He was a grounding point for her – coming out can be scary, especially when your family disapproves, like Rosa’s. Having Holt in her corner really makes a difference. This was driven home again in season six when Rosa introduces her girlfriend to Holt. She put it off for a while, leading Holt to believe she didn’t care about him. When she reveals she was afraid of his disapproval, because he means so much to her, that shows this BROTP isn’t going to slow down anytime soon. Rosa/Holt is the platonic relationship queer fans deserve: built on love, support, and understanding.