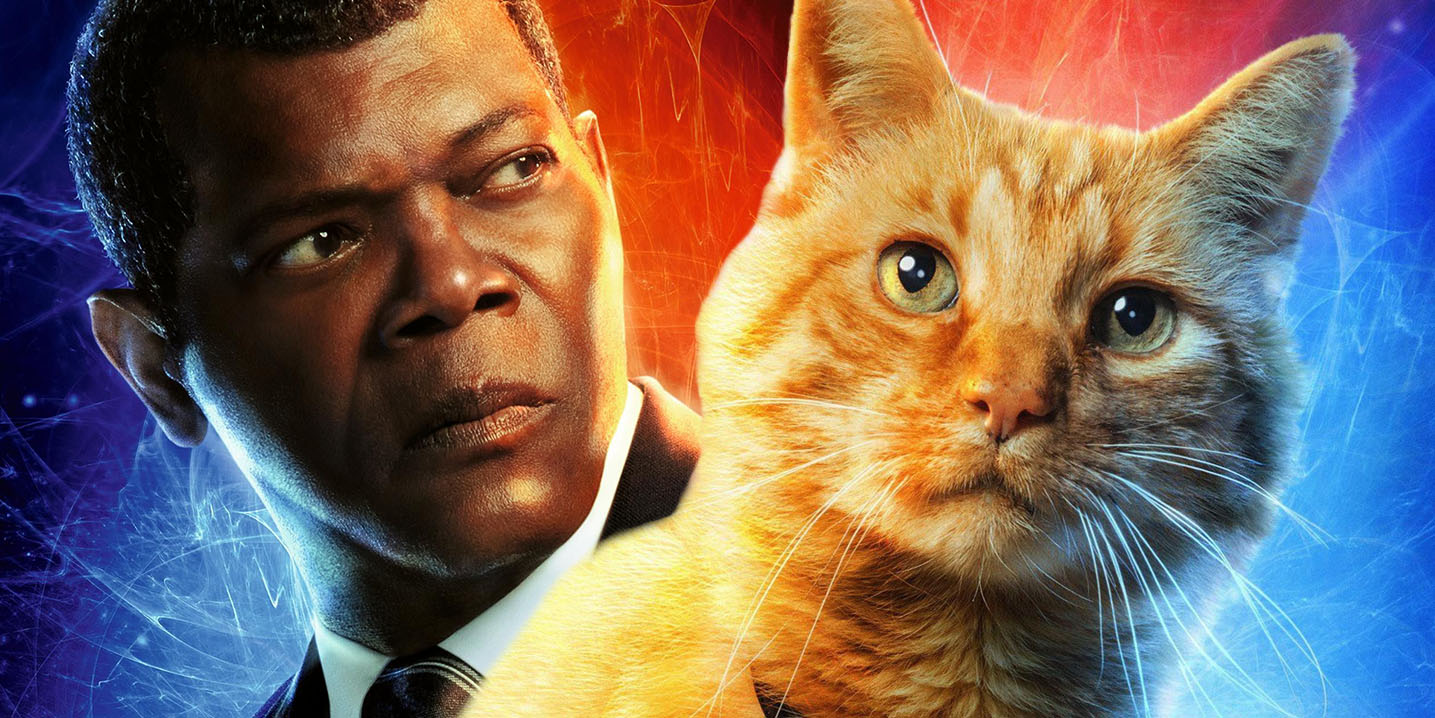 Presenting OTP Tuesday! Each Tuesday I will introduce you to a new One True Pairing! Tune in each week to find out which fictional couple you need to agonize/squee over next. This week is perhaps our strangest BROTP yet: Fury/Goose.

Fury/Goose refers to everyone’s favorite odd couple from Captain Marvel: Nick Fury and Goose the Flerken. This interspecies bromance was one of the highlights of an already amazing movie.

Nicholas J. Fury is a familiar face for Marvel fans, being a staple of the MCU all the way back to Iron Man. Fury, who insists that everyone – even his mother – only ever calls him Fury, was the head of SHIELD and the originator of the Avengers Initiative. From Iron Man all the way through Infinity War, he has been a behind the scenes presence, gathering our heroes together and supporting them as they save the world.

But in 1995, Fury was just a simple SHIELD agent with Level 3 clearance. Fury and his partner, the also familiar Phil Coulson, are called to respond to a reporting of a strange woman falling through the ceiling of a Blockbuster. Fury is amused to meet “Vers,” a strange woman dressed for laser tag who starts giving him orders about an invasion of Skrulls, shapeshifting aliens.

Fury doesn’t take Vers seriously, until he comes face to face with one of the aliens disguised as Coulson. He decides to track down Vers and see what she has to say. When he finds her, they go to a government research facility to research Project Pegasus. However, Fury alerts SHIELD that he has Vers, and they come to take her into custody. The plan goes awry when it’s revealed that Fury’s boss is a Skrull, and Vers and Fury must make their escape.

What follows is a grand adventure as Vers learns the truth of her past – she is a pilot named Carol Danvers who has been manipulated. Fury and Carol now try to save the Skrulls, going into space and taking part in a battle for the species. They succeed, and Carol heads into space, but not before giving Fury a way to contact her in emergencies. Fury then starts the Avengers Initiative.

Of course, there’s another vital party to Captain Marvel besides Fury and Carol. They get unexpected aid from a cheerful tabby cat named Goose. Goose was formerly the companion of Dr. Wendy Lawson, the scientist in charge of Project Pegasus. In flashbacks, we see that Goose took a shine to Carol, which Lawson says is unusual. When Lawson dies, Goose is left alone.

Except… there’s a lot more to the story than that. Lawson was actually a Kree, an alien scientist whose species was at war with the Skrulls. When Lawson – real name Mar-Vell – learns that the Kree have been lying about the Skrulls in order to conquer them, she decides to betray her people and help the Skrulls. She designs Pegasus in order to help the Skrulls escape the Kree for good. When the Kree learn about this, they hunt Mar-Vell down and kill her.

Mar-Vell’s death led to Carol gaining powers and being abducted by the Kree, who used her for their own advantage. When she comes back to Earth and goes to the Pegasus facility with Fury, they run into Goose, who is still roaming the halls. Fury is enchanted by the cute cat, but Carol admonishes him to stay on task. When they make their escape, though, Goose sneaks aboard their plane, to Fury’s delight.

Goose comes along with them on their mission. For some reason, she terrifies the Skrulls, which keeps them in line (or so Fury says to justify her presence). But in space, we learn the truth: Goose is actually a Flerken, a dangerous alien. She swallows the Tesseract, Mar-Vell’s power source, to keep it from the Kree. Later, when all is over, she returns to Earth with Fury as his “pet,” so Fury can keep an eye on the Tesseract.

Revealing that Fury is actually a sucker for cute animals, cats in particular, was one of the best parts of Captain Marvel. The Fury that we get to know in the modern day MCU is gruff, untrusting, and a spymaster. But now we get to see the truth: he’s really just a big ol’ softie.

The moment when Fury meets Goose and lavishes her with baby-voiced affection was played up in the trailers, and for good reason. It was a great hook to amuse and entertain people. But for once, the trailers gave us a good payoff. The cutesy moment would lead to the best bromance I’ve seen in years.

The Buddy Cop movie is a longtime genre staple. In a buddy cop film, two people, usually completely different and not so good at getting along, are forced to work together to save the day. Think Rush Hour or Lethal Weapon. There’s usually a gruff, play by the rules type, and a loose cannon, wisecracking rule-breaker. It’s a very formulaic genre, but its lasting popularity means something is working.

But while interspecies buddy cop films aren’t unheard of – think Turner and Hooch – Captain Marvel takes it to a whole new level with Fury/Goose. These two aren’t even from the same planet. On the one hand, you have Fury, the spy who doesn’t take any shit. On the other, you have a cat. And yet, somehow, it seems like Goose is the lead in this duo, and Fury may be the young rookie just learning the ropes.

A good moment comes when the Kree are scanning the rebels for threats. Fury comes up as not very dangerous at all, to which he takes extreme offense. After all, he was a soldier and is now a spy, proficient in fighting and weaponry. But for Kree, a human isn’t much of a threat at all. Then they scan Goose, who Fury still believes to be a normal cat, and reveal that she is a major threat. He can’t believe that he ranks below a cat in terms of danger.

But all this payoff is rewarded in the reveal. When Fury refuses to take the Tesseract, afraid to touch it, Goose erupts, tentacles and fangs emerging from her mouth to swallow the artifact. Fury is astonished to realize that the cat he had been baby-talking and petting was in fact, some crazy scary alien. Now he understands the threat.

The fact that a Flerken is virtually indistinguishable from a normal cat really makes this better. If Goose was like mostly feline, clearly cat-like but with something off about her, it would make sense that everyone is afraid, the reveal that she is a terrifying and deadly alien would be an “oh, okay” moment. But the fact that she really just seems to be a normal cat makes it all the better.

Fury/Goose is able to work because Fury forms a relationship with the Flerken before he knows she is a Flerken. To Fury, this is just an adorable cat, and he loves cats. Obviously, he’s gonna pet the cat, and tell her what a good cat she is. He’s gotta protect her when Carol is stern and spoil her. He’s a cat person. He acts just like any other cat person. It’s adorable, and completely undermines the tough guy attitude we’re used to from Fury.

But it’s also hilarious. At first, Fury is terrified by Goose just like everyone else. But he quickly realizes that (a) she is still a good kitty, and (b) she is a useful ally. He carries her back to the jet and uses her as a weapon against the Kree. On their way back to Earth, he’s still treating Goose the way he was before. He will live to regret this, however, when Goose scratches his eye and he later loses it (making his statement in The Winter Soldier about losing his eye more hilarious).

The implications of Goose being Fury’s “pet” are great. Does he just get a reputation at SHIELD? Do new agents ask why he has a cat in his office, and hear “oh that’s just Fury, he loves cats.” How long does he keep her? I gotta know.

We see at the end of Captain Marvel that Fury keeps Goose in his office back at SHIELD. She lounges on a pet bed and surveys her domain, pretty much just like any other cat ever. Fury has kept a wary eye on her since she is still containing the Tesseract, but pretty much they just chill together. Later, in a post-credits scene, Goose hacks up the Tesseract like a hairball, showing how Fury is able to use it by the time Avengers takes place.

But there is a whole almost two decades in the meantime. Since Captain Marvel is a prequel, taking place over a decade before even Iron Man, we’re left wondering. What happens to Fury/Goose, the BROTP of my dreams? We never see Goose in any other MCU film. Is that simply because, until now, she wasn’t thought of, so naturally she wasn’t included? Or did something more nefarious happen?

There could be any number of reasons. It’s possible that Goose isn’t with us any longer, but we’re all hoping that the lifespan of a Flerken is significantly longer than your standard house cat. There’s also a lot of fan concern that Goose was still alive, but became a victim of the Snappening. Or, a nicer thought is that Carol came back to Earth at some point and took Goose back out into the stars.

Personally, I’m choosing to believe that Fury had a reputation to maintain, so he couldn’t exactly pull out his phone and show the Avengers cute pictures of his cat, but that she’s always there. Maybe Hill or Coulson petsit Goose when Fury goes out of town. Maybe Fury and Goose have standing weekend Netflix binges. I’m hoping we see more Fury/Goose in the coming months, because this needs to never end.

Hell yeah! Fury/Goose was a BROTP destined for canonicity from the start. As I said, the trailers definitely played up the moment when Fury first meets Goose. To some, it might have just seemed like a cute moment to emphasize that this isn’t the Fury we’re used to. But fans who knew that Carol has a Flerken named Chewie in the comics were quick to speculate that this was going to go the same route.

The movie plays with that assumption. Unless you’re brand new to Captain Marvel and don’t read any speculation or articles on the internet (in which case why are you here), you probably knew that Goose was going to play a major role. But from the start, we’re left to see things from Fury’s point of view: that this was just a good kitty who was soft and pretty.

It’s even played up for laughs. When Talos, the leader of the Skrulls, shies away from Goose in fear, it’s seen as hilarious. Fury likes to spook Talos with the cat. But we will see later that Talos is the one in the right when Goose goes full Flerken on the space station. Suddenly, Fury is forced to realize that the cute cat he’d been treating, well, the way cat people treat cats, is far more dangerous than anything he’s ever encountered.

But that doesn’t mean he isn’t going to keep loving her anyway. Flerken or no, Goose is still a good kitty. She still deserves Fury’s affection, but rather as a partner in crime (or sidekick, even). Goose may sleep on a bed in Fury’s office, but she’s no pet. Instead, Fury/Goose gives us a team-up we never knew we always needed. And the MCU is all the better for it. More Fury/Goose, please!