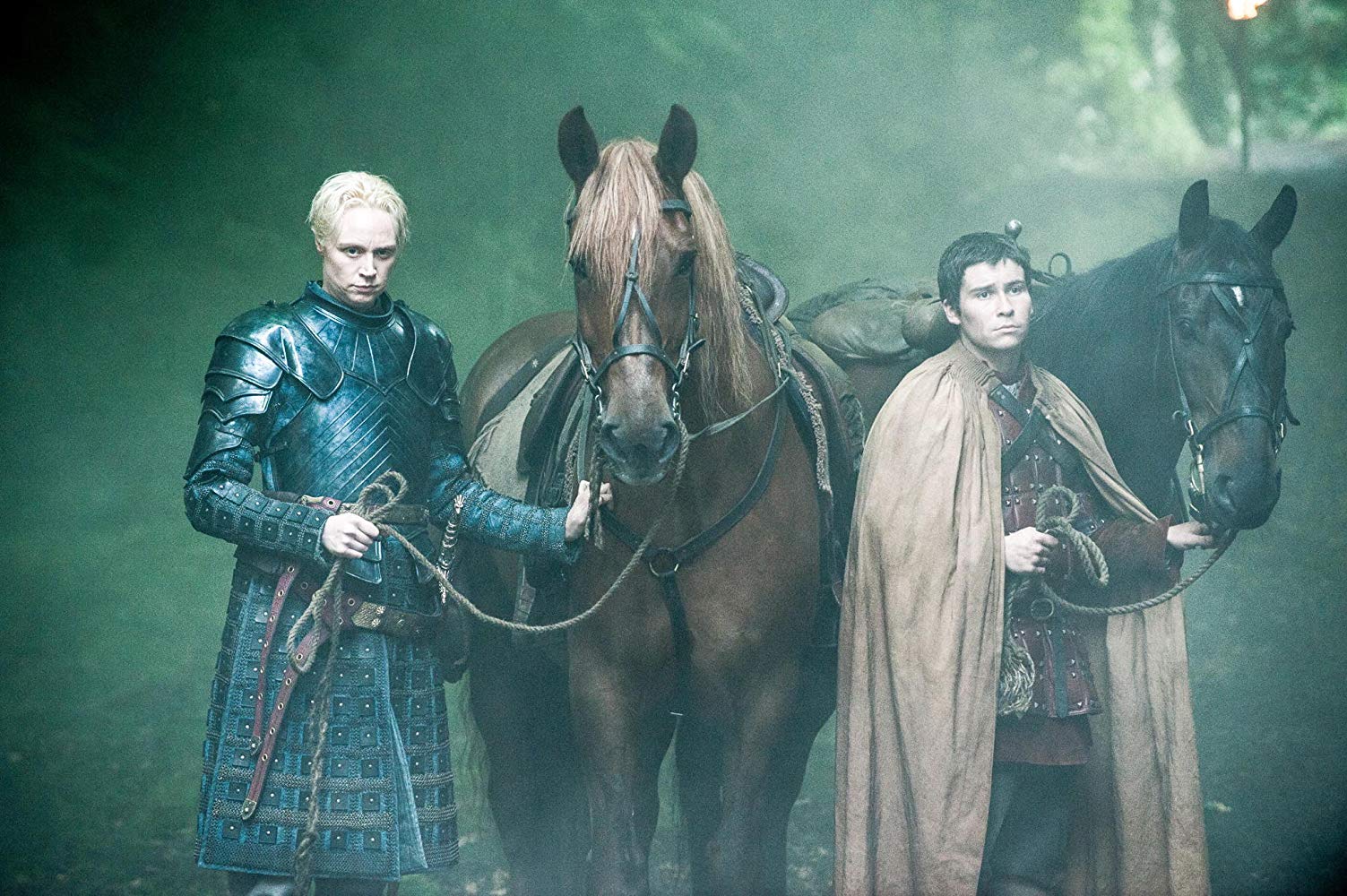 Presenting OTP Tuesday! Each Tuesday I will introduce you to a new One True Pairing! Tune in each week to find out which fictional couple you need to agonize/squee over next. This week’s BROTP is the buddy pairing you never knew you always needed: Brienne/Pod.

Brienne/Pod refers to Brienne of Tarth and Podrick Payne, two secondary-level characters in Game of Thrones. The two are consistently supporting characters who have added a great deal of enjoyment to the show.

Brienne of Tarth is introduced in season two as a Kingsguard to Renly Baratheon, a hopeful for the throne. When Renly’s brother, King Robert Baratheon, dies, Renly attempts to take the throne on the basis that his brother’s children are illegitimate and therefore cannot rule. Renly thinks he will make a better ruler than his brother, and given that he is a progressive and charming man, he may have.

We see Renly’s progressive ideals when he names Brienne to his Kingsguard. As a woman, Brienne is constantly being taken less seriously. Men focus on mocking and belittling her when they should be worried about her skills in combat. In fact, the reason Brienne is devoted to Renly is because he was kind to her when she was young and insecure, and a group of young men made sport of her insecurities. So she becomes his Kingsguard and swears to protect him.

Unfortunately, while Brienne is a skilled warrior, she cannot combat bloodmagic, and is powerless when Renly is slain. She escapes with Catelyn Stark, who takes her on as a sworn sword. Brienne devotes herself to Lady Stark and swears to protect her and help her get her children back. Brienne tries to exchange Jaime Lannister, the queen’s brother, for the Stark girls, but they are attacked along the way. Jaime protects Brienne, leading to a mutual respect.

When Jaime returns to court and finds his sister plotting the death of Sansa Stark, he sends Brienne to save her. Brienne attempts to find and protect the Stark girls, though both at first reject her. When Sansa is brutalized and betrayed, however, Brienne is able to save her. Brienne then becomes Sansa’s sworn sword, just as she was for Catelyn. While serving Sansa, Brienne feels she can fulfil her vow.

Podrick Payne’s trajectory is a lot more convoluted than Brienne’s. Originally, Pod was a squire to a no-name knight. The knight got drunk and stole a ham, sharing it with his squire. When he is found in the morning, he is hanged as a thief. The only reason Pod survives is because Tywin Lannister sees this as an opportunity, sending Pod to squire for his son Tyrion Lannister. It’s intended as punishment for both.

As Tyrion’s squire, Pod doesn’t do a lot of squire-y things. Instead, he mostly pours wine and serves food. Tyrion is kind to Pod, but he isn’t a knight. However, things changed when Tyrion led the defense of the capital during the Battle of Blackwater Bay. A knight tries to kill Tyrion, and he assumes his sister, the queen, is behind it. But Pod kills the knight, saving Tyrion’s life. The devotion between squire and lord after that is strong.

When Tyrion is arrested for allegedly killing the king, Pod becomes a target of political machinations. The queen tries to force him to testify against Tyrion, but he refuses. Seeing that Pod is in danger, Tyrion sends him to Jaime for help. Jaime, who is sending Brienne out after the Stark girls, decides that Pod could be Brienne’s squire. While Pod is excited to serve, Brienne is less than enthused.

While Brienne is unimpressed with Pod’s utter inability to function as a real squire, she sees something in him and agrees to train him up. Pod wants to be a knight someday, and Brienne will help him get there. In return, he is devoted to her and to her cause. He takes some time to learn what he needs to know, but Pod soon becomes an invaluable squire and help to Brienne.

I’ve stated before that there are very few romantic OTPs in Game of Thrones that are even remotely good. But Westeros abounds with great BROTPs. The myriad characters and plotlines allow for a lot of different pairings to get their time to shine. We see great family pairings and pairings by necessity, like anybody else with Bronn.

But Brienne/Pod is a truly delightful BROTP.  Brienne of Tarth is such a great character, and she really stands out, not just in Game of Thrones but in pop culture overall. Podrick Payne is adorable and one of my favorite characters in the show. He’s like a little puppy who just wants to help, and Brienne is long-suffering, but comes to care for him over time. It’s a delightful pairing to watch.

One of the best things about Brienne/Pod is how different the characters are. Brienne is all power. She’s a 6’3 powerhouse who can best just about any man in combat, having defeated Ser Loras Tyrell, the Hound, and Jaime Lannister. She is rather stoic and closed off, having long since learned that most people suck and aren’t worth the pain they’ll inevitably cause. Pod, for his part, is half a foot shorter than Brienne. He’s goofy and eager, with a cheerful disposition and a friendly nature. He has absolutely no idea how to fight or ride a horse or any skills necessary to function outside of a city.

These conflicting personalities lead to a lot of entertainment. When he was squiring for Tyrion, Pod worked just fine. He was good at pouring wine and providing assistance. He was never really called upon to do anything difficult, though he went above and beyond at the Blackwater. But with Brienne, Pod has a lot more to do. He has to ride across the countryside and cook wild food; neither goes well. When Brienne and Pod are set upon by enemy soldiers, Pod is unable to defend himself. He’s so far from what Brienne expects of a squire that neither really knows where they stand.

But despite their differences, they get on well. It’s a rough road at the start, to be sure. Brienne doesn’t want a squire at all, seeing this as a burden that will slow her down. To learn that her squire barely merits the term is even worse. But over time Brienne sees what he lacks in skills Pod makes up for in heart. He can learn to be a good squire, and she can teach him. But he’s already got the right nature to serve.

Brienne and Pod are definitely very different characters, and this does cause some clashing. However, they do have one central thing in common. They have both been seen as outcasts, and this shaped their personalities. For Brienne, it’s obvious. Even before she became a fighter, she was an outcast for her appearance. Boys called her Brienne the Beauty and teased her mercilessly as she learned to fight and hold her own. As a fighter, though, she is still seen as an outcast. She’s mocked for being a woman, and it’s assumed she cannot fight well. She has to constantly struggle to prove her worth. Pod’s outcast nature is less obvious, but he’s often referred to as simple or odd. He’s a poor boy whose gentle nature makes him an easy target.

Because of the way that both Brienne and Pod have been outcasts, they have learned one common trait: loyalty. Brienne is fiercely loyal to Renly because he was the first to treat her as a person, not a joke. When the other boys were horrible to her at a ball, Renly made her feel like she was worth something. So she devotes her life to him. When she is unable to save him, she plans her revenge. She also devotes herself to Catelyn Stark, because she needs an outlet for her loyalty and because Lady Stark is good. Pod is fiercely loyal to Tyrion, going so far as to save him on the battlefield. Although it puts him in danger, he refuses to turn on Tyrion during the trial. Tyrion gave him a position and treated him well, so Pod is loyal. Later, he transfers that loyalty to Brienne, refusing to leave her even when she tries to get him to go. They’re well-matched.

Probably death! Death is coming for all of Westeros, and if we have learned one thing from seven seasons of Game of Thrones, it’s that all men must die. And they probably will. It’s time for the final season of Game of Thrones, and it looks bleak for all our favorites. Many people have already died in the show, and many more are sure to come before things end for good. The first episode of the final season premiered on Sunday, but this article was written before then, so I’m hoping that we don’t lose Brienne or Pod so soon. However, there are no guarantees in life, especially when it comes to Westeros.

When we last left Brienne and Pod, they were presumably back at Winterfell, where they served Sansa Stark. The Stark children have all been reunited at home, and Brienne sees that Sansa and Arya are both safely returned to Winterfell, fulfilling the oath she gave Catelyn Stark. They are facing the army of the dead, which is on its way south to conquer/kill everything in sight. The two had recently traveled to King’s Landing as part of a group to try and convince the queen to aid them, which let them reunite with their erstwhile Lannister friends. Will we get closure before they all die?

Ideally, of course, neither Brienne nor Pod would die in the final season. An optimal ending would see the Night King defeated by the combined forces of Westeros. Brienne could continue serving Sansa, and Pod could return to serving Tyrion. Sansa and Tyrion look primed for leadership at the end of the season, so Brienne and Pod would be serving their country well. But that’s probably way too optimistic. Death is more likely.

Brienne/Pod is a delightfully canon BROTP that honestly gives me life when I’m watching Game of Thrones (which is necessary because damn that show can be rough at times).By the time we left them in season seven, these two were as bro as bro gets. Brienne has taken on Pod as a student, and she teaches him as best she can. We even get to see them train at Winterfell, though this is more an opportunity to allow Brienne and Arya to duel.

It was a long road for Brienne/Pod. The two characters didn’t even meet until two seasons after they first appeared. Is there such a thing as a slow burn BROTP? There is now. Because this was definitely a slow burn. Two seasons to meet is just the start. There’s a lot of antagonism at first, mostly on Brienne’s part. She is very emphatic that she doesn’t want a squire and only seems to give in when Jaime points out that Pod is in danger and needs to leave the capital. Brienne stays thoroughly annoyed at this imposition, especially when Pod can’t ride a horse or burns their dinner.

But they get there, eventually. Though Pod, from the start, faithfully and loyally serves Brienne, she takes some time to come around. But she soon sees that while Pod is a goofy kid, he has potential, and a whole lot of heart. Once she begins to see Pod in that light – not as a failed squire but as a good person – she comes to appreciate him. Beginning to train him was an olive branch, and both benefitted from further acquaintance. The Brienne/Pod dynamic is one of my favorites in the whole show, and I hope we get to see more of it before the end.