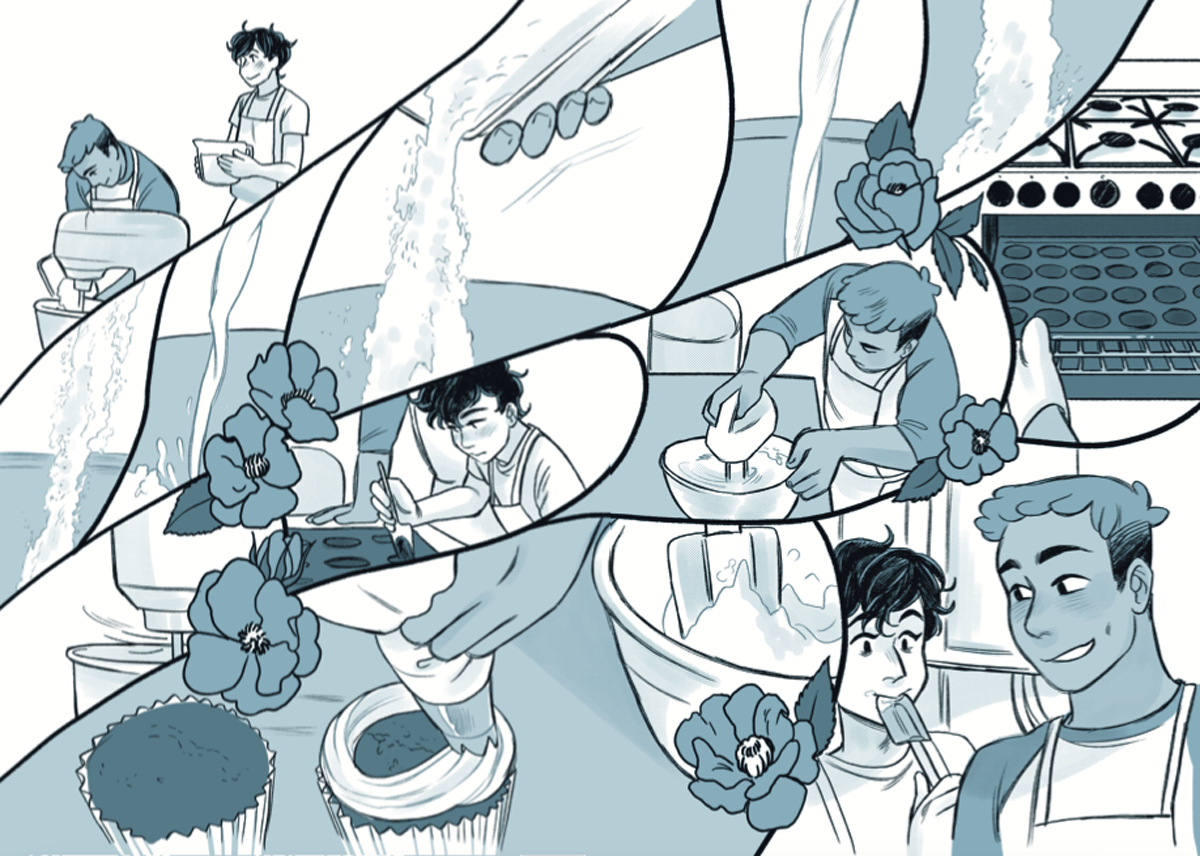 It is no secret that for years the entertainment industry has failed to represent LGBT people as anything but their sexuality. LGBT characters were usually displayed as being extremely flamboyant, hypersexualized, or downright emotional. Luckily, modern media woke up from their lazy-writing habits and began representing LGBT characters as people (who just happen to not be heterosexual). Perhaps the perfect example of how far the industry has come is through the comics Bloom by Kevin Panetta (writer) and Savanna Ganuchea (artist).

Released earlier this year, Bloom focuses on two teenage boys and their journey in finding themselves. While this type of bildungsroman storytelling is nothing new, what Bloom does so well is that its focus is not on its main characters being gay. Instead, the series presents a story of teens discovering their interests, struggling to make decisions regarding their future, striving for independence; i.e. being normal teens. It is an adorable series which perfectly encapsulates the progress made in the writing and representation of LGBT people.

The Plot Of Bloom

Bloom follows a teenage boy named Ari who lives in a small town and works in his parents’ bakery. Since childhood, Ari has always wanted to move to the big city in pursuit of a musical career. He is a member of a band, and the group receives an opportunity to move together to the city to make it big. However, while Ari wants to go, his parents refuse permission as they need his help to keep their struggling bakery afloat.

In order to convince them, Ari begins searching for a replacement, so he can leave with a guilt-free conscious. However, after failing to find anyone suitable, Ari begins to worry about whether he will ever leave his small town. Then, enter Hector, a teenage boy from the city, visiting the area to clear his recently-deceased grandmother’s home of her belongings.

While in the area, Hector finds one of the flyers Ari printed out advertising employment at the bakery. Hector, who happens to go to culinary school, applies and gets the job. To Ari, Hector is a godsend as not only is he a capable baker but Ari’s parents adore him. With Hector there, Ari feels free to move with his band to the big city with no regrets. However, as the time Ari spends with Hector grows and the two become closer, will Ari have the same drive to leave home in search of the high life? Or will he find new passions right at home?

The Art Of Bloom

The art in Bloom by Savanna Ganuchea is an experience. Considering the influence of music and baking in the series, Ganuchea blends the two together in her panels. Whenever there is a baking scene, the panels receive a warped style (similar to a wave or musical notes). She is also descriptive in these baking scenes. Depending on the pastry, Ganuchea draws the characters mixing the batter, kneading the dough, basting, etc. Her drawings look so realistic readers will practically smell the baked goods through the pages.

Resonating with media progress, Ganuchea’s cast in Bloom displays modern America. The characters all fit somewhere on the broad spectrum of race, sexuality, and gender. Along with her characters, the setting in Bloom also mirrors current time. The city illustrations portray a large, bustling atmosphere where opportunities are endless. However, in the small town where Ari lives, while tourism is alive and well, the gentrification of the area negatively affects the natives. For example, Ari’s family’s bakery, while far from run-down, is nowhere near as trendy when compared to other buildings.

The coloring done in Bloom is also unique. For, instead of the comic being in color or even black and white, the art is in blue. Surprisingly, this color scheme fits with the story’s style as everything transitions smoothly like a wave. Plus, since Ari’s family lives near the beach, the coloring is reminiscent of the sea. Despite the unique color choice, the shading done in Bloom makes up for the lack of color. Everything pops out of the pages, and the art is so vivid that readers will have no problem incorporating colors themselves.

Bloom Represents The Struggles Of Youth

Bloom’s writing by Kevin Panetta provides readers with some of the most accurate representations of teenage dilemmas. While everyone goes through their rebellious years, adults often forget what it was like to be young. Most mediums portray teenagers as the stereotypical, hormonal, rebels-without-causes. They fail to give teens any depth or at least provide a deep introspective view as to why teens behave the way they do. Luckily, Bloom manages to lay out several obstacles teenagers have to face as they near adulthood.  The story’s solid writing helps bring older readers back to their youth as the struggles are relatable and realistic.

Being Wise When Choosing Friends

During their adolescence, teens have to figure out who they are and what they stand for. Oftentimes, in order to do that, they find like-minded people they can get along with. The people they surround themselves with will help mold them into their future self. Sometimes the people they meet change them for the better, other times they make them worse.

In Bloom, Ari has this problem. His bandmates vary in their treatment of him. He has bandmates who are respectful and treat him as a member of their group, while he also has some who do not. Knowing that being in a band is his ticket to the city, Ari tolerates the abuse from said bandmates. A majority of people go through similar relationships with so-called “friends,” for they feel the need to fit into a clique. Bloom displays this reality, showing that people like Ari who want to fit in are willing to tolerate and change their own behaviors in order to avoid isolation.

Needing To Be Independent

One of the main plot lines in Bloom is Ari’s need to be independent. He wants to leave home and move to the city with his friends to start his musical career. However, his parents are insistent on him staying with them in order to keep their business open. Now, most adults would see Ari’s decision to leave his struggling parents as selfish. However, if the older audience were to remember their youth, they would see Ari’s plight in a different light. Essentially, he feels trapped.

Every teenager wants to be independent at one point to find their identity. They consider their parents smothering and delaying their chances of experiencing the world on their own. What Ari wants to do is pursue his current passion – music. He is willing to work to accomplish his goal but to do that he has to leave home. Ari wants to establish a foundation for himself outside his parents’ bakery. Now, obviously, Ari’s situation is a special case since his parents need all the help they can get to maintain their bakery. However, in every other instance, Ari wanting to live independently would be the most relatable feeling to anyone.

Perhaps the biggest struggle of being a teenager is the uncertainty of the future. Teens receive so much pressure to have their career goals and futures in mind by the time they are 18 years old. They carry that unnerving feeling of anxiety to have their lives planned out or else go nowhere.

Throughout Bloom, Ari displays this dilemma. He knows that his parents need help with their bakery, but he does not want to spend the rest of his life there. He sees music as a potential career and an exit from the bakery. However, as he spends time with Hector, his plans begin to unravel. He starts enjoying baking with Hector which causes him to delay moving out and question his plans. This situation occurs to a majority of teens as they move out of home and attend college.

They enter with a goal in mind but plans change depending on the people or opportunities that arise. Bloom shows the uncertainty of life and that there is nothing wrong with taking time to think about one’s plans. It does not shame teens for not having everything in order at a young age. Instead, it urges them to experience life and consider what is best for them rather than others.

Emphasizing The Romance In “LGBT Romance”

Kevin Panetta and Savanna Ganuchea’s Bloom is a milestone in presenting teenage dilemmas and LGBT romance without stereotypes or clichés. The teenage years are a crucial time in a person’s life as they not only begin contemplating their future, but their bodies also undergo awkward changes. These changes not only apply to the physical, however, as some teens also start questioning their sexuality or gender identity.

While the LGBT community’s fight for equality is nowhere near finished, what is refreshing about Bloom is that it allows readers to partake in the achievements of the movement. It does this by displaying Ari and Hector’s romance as just that – a romance. There is no drama between Ari and his parents being against their relationship, or Ari struggling to accept himself. The series just shows them living life and developing their romance without drawing special attention to their sexuality. Essentially, Bloom does not attempt to make their romance appear any different just because they are gay.

This take on an LGBT romance is necessary as it does not attempt to draw attention or differentiate romance based on sexual preference. There are too many same-sex-couple story lines that have a person feeling ashamed of their sexuality, needing to be secretive, or even dying. The fact that Bloom allows the main characters to be out in the open without bringing up any same-sex clichés is a sign of improvement.

If you would like to purchase Bloom, visit Barnes and Noble or Amazon. For more reviews, visit our Comics page.

Become a Patron!
Bloom by Kevin Panetta and Savanna Ganuchea
Bloom
Bloom provides readers with an adorable, slow-burn, teenage romance and manages to avoid sensationalizing the couple because they are gay. Along with Bloom's success in representing teenage dilemmas, the comic represents a milestone in the improvement of portraying members of the LGBT community as just people.
PROS
Shows LGBT Romance As Just Romance
Realistically Portrays Teenage Dilemmas
Unique Art Style And Coloring
CONS
Character Conflicts Wrap Up Too Neatly
89
Love Is Love