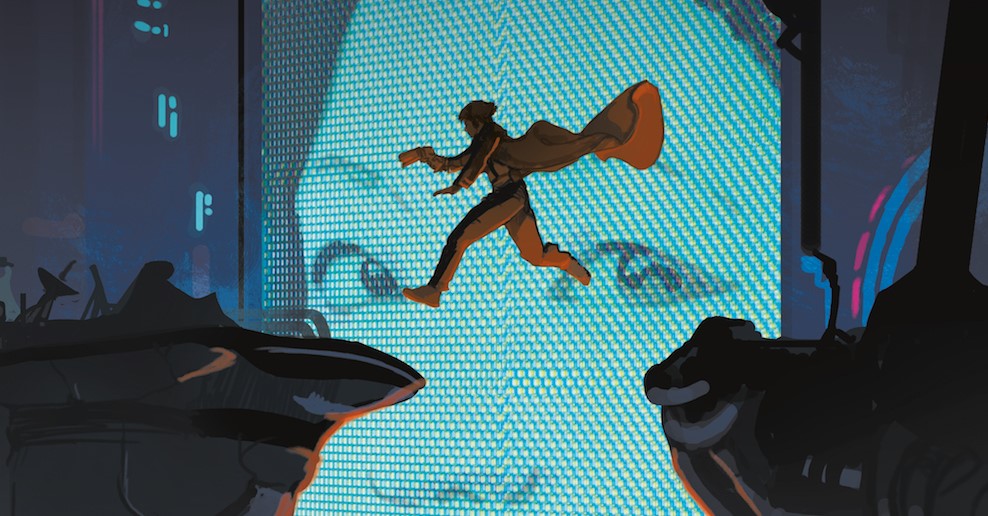 Michael Green and Mike Johnson have really created a simple but fascinating mystery that is at the core of Blade Runner 2019 #2. We have been given a new perspective on Alexander Selwyn from the previous issue. There was no doubt that he seemed to care for his wife and daughter. However, a rich man like him in the dystopic cyberpunk world can never be fully trusted. In this issue, we know that his wife and daughter are on the run, and do not wish to ever see him again.

Meanwhile, Ash slowly tracks them down and stumbles upon the idea that she shouldn’t trust Selwyn. There is something about his daughter that he wants gone, which means he plans to kill her. Whether Ash can trust this information is another question, but in her gut, she knows she shouldn’t keep Selwyn up to date just in case.

A good mystery, especially in a noir toned piece such as Blade Runner 2019 #2, it’s always best for the detective to be off-balance. The client should be just as untrustworthy as the people the detective has to question to solve the mystery. For instance, the film Blade Runner is based on Philip K. Dick’s phenomenal novel, Do Androids Dream of Electric Sheep. In the novel version of the story, Rachel is just as untrustworthy as the other replicants. Deckard is never sure which way he should turn as he kept off-balance between Roy and Rachel throughout the entire story.

Motherhood In A Cyberpunk Future

This issue opens with a brief look at Ash’s backstory. It shows us the moment in which they discovered her issues with her spine, causing her to need the brace that we saw in the previous issue. Her mother leaves her after this diagnosis. We don’t see the context of her mother leaving, though Ash’s narration provides an answer. She left to go off-world, the place for the wealthy and the healthy and sent money back to provide for Ash. Ash herself was too young to leave.

This is paralleled with Isobel and Cleo, Selwyn’s wife and daughter. The parallels between them started in the first issue but become more apparent here. Isobel’s narration mentions that she never wants her daughter to wake up again. It’s a horrible thought for any parent to have, but in the Blade Runner universe, it makes sense. Much like Ash’s mother breaking down at her daughter’s diagnosis and leaving, Isobel is having to navigate the horribleness of the world and still provide for her daughter. Things would have been easier if she didn’t have Cleo along, and same for Ash’s mother. And is this future even worth preserving for the children?

Blade Runner 2019 #2 is willing to ask the tough questions that come with a cyberpunk world.

The Aesthetic Of The Films

Andres Guinaldo’s art is fantastic, as I mentioned in the review for Blade Runner 2019 #1. His attention to detail, beautiful renderings of locations from the films, and gritty style fit perfectly with this comic. But one aspect I didn’t talk about as it’s more prevalent in Blade Runner 2019 #2, is the look of the smaller details of the world. Blade Runner is a film that is very much a product of the 1980s. From the themes of the story all the way down to the overall aesthetic of Los Angeles in this alternate version of 2019.

The resulting look became so iconic that it helped shape the look of the cyberpunk genre that we have today. In Blade Runner 2019 #2, we see multiple television sets throughout the issue. Never once is the attempt made to update the look, to make it match where our technological level is. The film was made in the ’80s, therefore the comic made in 2019 has the look of the ’80s.

The TV sets have a small screen, bulky, and have an elongated backside. Much like the TV sets of the time. While this story is set in 2019, it is very much an alternate 2019, much like the films. I applaud Guinaldo and the rest of the creative team for keeping the vision of this horrible future intact, rather than trying to update it for modern audiences.

Blade Runner 2019 #2 is a great second issue, which is rare as most second issues are never as strong as their first. But this is the reverse, being in my opinion, better than the first issue. The parallels between Ash and Isobel become more apparent and the mystery has an added complexity to it. End it off with a cliffhanger that is thrilling and action-packed; you have yourself a fantastic comic.