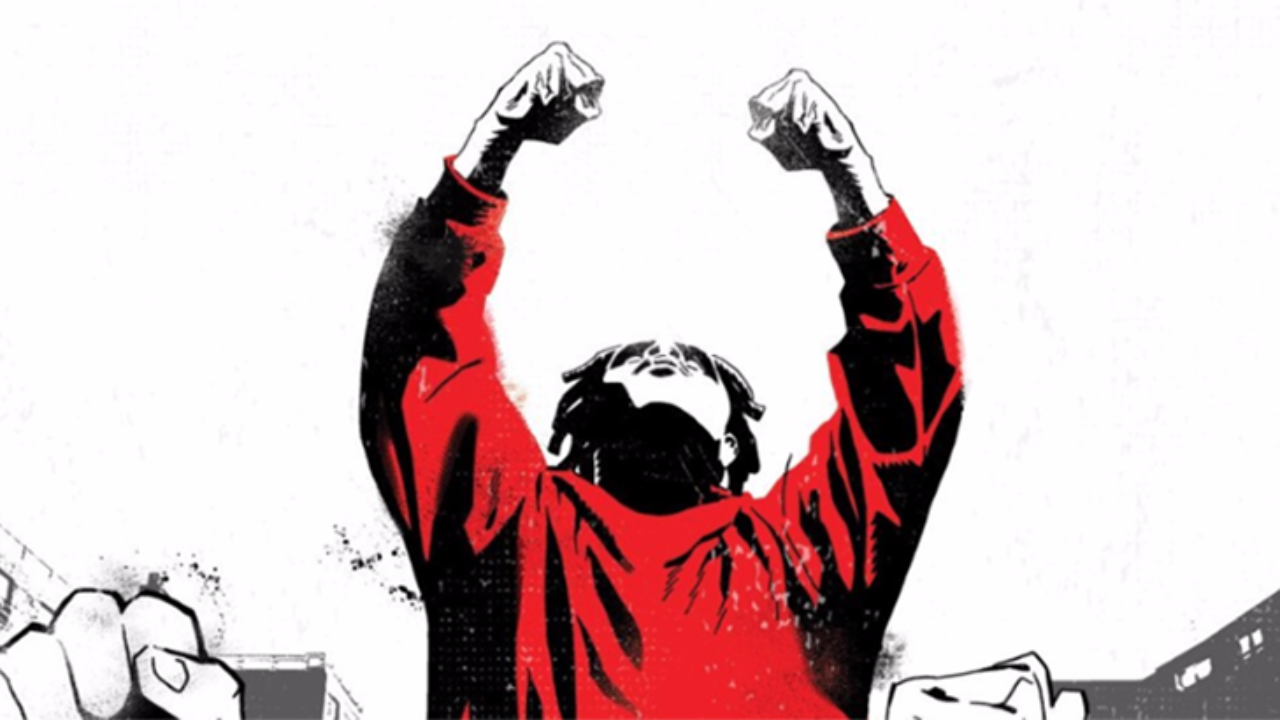 Conversations regarding race are hot-button topics in current media. At times, these discussions make people feel awkward, as many believe bringing up race only complicates advancement. However, while these talks often lead to uncomfortable moments, they are nevertheless necessary for improving community relations. A way to ease into these conversations is through art mediums like graphic novels. One series that brings a unique view to race relations is Black Mask’s Black by writer, Kwanza Osajyefo.

The Plot Of Black Mask’s Black

Black Mask’s Black follows a young, black teen named Kareem Jenkins. One day after playing basketball, Kareem and his friends get stopped by the police because their appearances matched three robbery suspects’. When one of his friends runs out of fear, the officers gun them all down. To the surprise of the paramedics, Kareem survived the shooting and fled. He hides and tries to understand how he lived. It is at that moment he meets a man named Juncture who saves him from the police chasing him.

Juncture takes Kareem to a secret location where he learns he has special abilities. Kareem developed a superpower which allows him to involuntarily adapt to external stimuli. Confused as to how he gained these powers, Juncture reveals that these abilities develop in only 0.5% of the population. However, they can only awaken within black people. With this revelation, Kareem joins Juncture’s group, The Project, to train alongside other super-powered black teens.

Their mission is to protect these black people who the government wishes to maintain a secret so they can capture and experiment on them. However, with each awakening becoming harder for the government to hide, will super-powered black people become the new norm or will this lead to complete revolution?

The Artwork Of Black Mask’s Black

Tim Smith 3 created the character designs for Black Mask’s Black while Jamal Igle did the illustrations. Smith 3’s designs diversify each character. Unlike in most comics, where heroes are either all muscular or have an hourglass figure, his characters represent a broad spectrum. There are characters who are slim, tall, short, husky, etc. They present the reality of life where not everyone has a body like a model or body-builder.

The artwork within this series is also superb. Jamal Igle draws the characters with realistic details which help bring this comic closer to home. The series covers some important debates occurring in today’s society: racism, police brutality, government conspiracies, etc. Therefore, the life-like artwork only helps enhance its believability. Unlike in a majority of present-day comics, Black Mask’s Black does not have any color. All the drawings are in black and white. While some may see this as detrimental, it actually enhances the storytelling.

The lack of color helps readers see every single detail which Igle illustrates. Also, the action sequences are so well done that, while reading, one forgets the artwork is in black and white. Readers can fill in the colors mentally as they immerse themselves in the story. Plus, the obvious black-and-white symbolism brings the discussion of race further to the forefront.

Black Mask’s Black discusses many social topics throughout its issues. These range from racism to differing opinions on how to help the African-American community from the community itself. The series creates a unique spin in explaining exactly why black people are often majorly targeted by certain agencies. The comic does require readers to stretch their imagination as to why the government seems to have an agenda against the black community. However, the overarching message of Black Mask’s Black gets expressed brilliantly with the way it covers the following topics.

A Conversation On Race

Race is the driving force within Black Mask’s Black. The series does not falter in portraying the legitimate hatred people can show one another over their skin. Black features representations of white supremacy and the violence people who follow such beliefs can cause. Throughout Black Mask’s Black, the African-American characters show awareness of the fact that there is bias against them. They understand that people act wary of them due to stereotypes surrounding their race. Therefore, if word gets out to the public that only black people develop superpowers, more irrational fear may develop.

Black brilliantly uses the awakening of superpowers in African-Americans as a way to start a conversation on racial tension. (The technique is similar to how Marvel’s X-Men begins a conversation on discrimination.) The graphic-novel medium allows for the portrayal of multiple perspectives. While the subjects may be uncomfortable, they are nevertheless necessary discussions that must be had in order for social relations to improve.

The Relationship Between The Police And Community

A major discussion occurring in the country today is the relationship between the African-American community and police. Black Mask’s Black does not gloss over the rift between the two groups as its story immediately begins with three black boys getting shot. The young boys get shot due to mistaken identities; however, the series does not allow the police to hide behind this argument. Black lets this important conversation occur through one of its characters named Ellen Waters.

Ellen Waters is a police officer in the force who also happens to be African American. She received a call regarding the descriptions of the restaurant robbery suspects (the men the three boys were mistaken for). When Ellen hears the call, she realizes just how much the description could apply to anyone in the neighborhood. She claims that most officers are not familiar with the area since they did not grow up there like she did.

When the boys die from their injuries, Waters does not hide her disgust over the situation. What Black Mask’s Black does so well is that it does not try to villainize the entire police force. There are people like Ellen Waters within the force who see the flaws of the agency and wish to fix them from inside. The series emphasizes the importance of diversity in the force that way fewer incidents like these occur. The more police familiar with certain neighborhoods can recognize the people and atmosphere better, deterring deaths due to mistaken identity.

Differing Opinions Within The Black Community

Not everyone in a particular race thinks alike, and Black Mask’s Black makes that fact very clear. The series provides a variety of characters who represent different ideas of progress for the African-American race. One of the downsides to Black Mask’s Black is that each character symbolizes more an ideology than an actual three-dimensional character.

Kareem Jenkins, the series’ protagonist, represents the side of the African-American community which wishes for unity among all races. Juncture, the leader of The Project, wants to protect his own people (specifically super powered African-Americans) from the government. However, there are other characters throughout Black who wish to dominate as the superior race. They see these powers as an opportunity to avenge their people for past wrongs.

Similarly to Marvel’s Black Panther film, Black Mask’s Black asks if there is an obligation for the African-American community to coexist with everyone else. It asks a legitimate question:

Is peace among all races possible or has too much damage occurred to even try?

While the series sacrifices rounding out characters to anything but clichéd representations of ideologies, Black succeeds in portraying the array of thoughts within the community.

If you want to purchase Black Mask’s Black, visit Amazon. Also, don’t forget to keep an eye out for the film adaption of Black in the near future. For more comic reviews and analyses, click here.