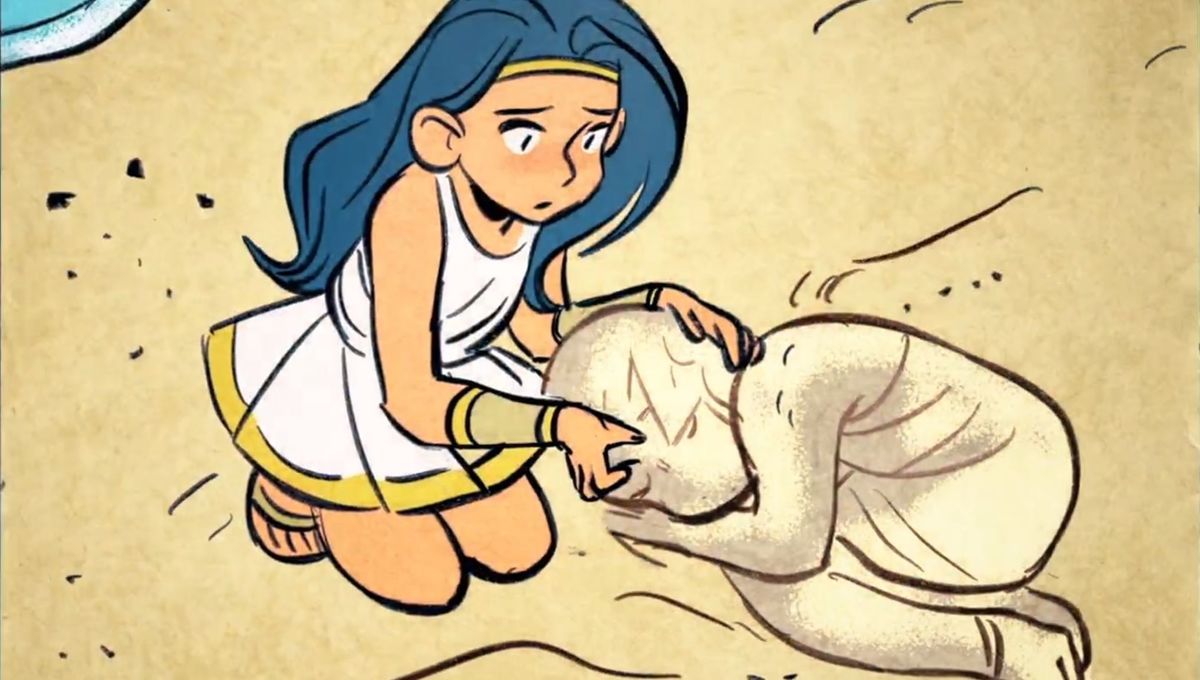 Believe In Yourself With Diana: Princess Of The Amazons

Starring solo and alongside other comic book legends like Superman and Batman, DC’s Wonder Woman is one of the most widely recognized superheroes of all time. But who was Diana before taking up her lasso of truth and fighting to protect us all? Written by Shannon Hale and Dean Hale and illustrated by Victoria Ying, Diana: Princess of the Amazons tells a heartwarming tale of what it means to find your place in the world.

The Little Hero In Diana: Princess Of The Amazons

In DC’s newest middle grade graphic novel, readers get a look at the young princess and see what it was like for her growing up in Themyscira. Though these Paradise Islands are a sanctuary for the Amazons, Diana is left feeling out of place. She’s the only kid amongst these ancient warrior women. Everyone is too busy keeping up the island and guarding the gate to Tartarus to spend much time with her, especially her mother, Queen of the Amazons.

All of this changes when Diana takes some clay and sand and tries to form another girl to play with out of clay. She prays to the Gods, saying

At first nothing happens, but soon her clay friend seemingly comes to life. With this girl, Mona, Diana finally has someone her own age who can play with her. However, with Mona’s sly nature and hidden intentions, she is not the perfect friend Diana was hoping for. Instead, her presence puts Diana and all of Themyscira at risk. Diana is forced to own up to her mistakes and use her strength to fix them.

Overall, this story is very well written. As expected from New York Times bestselling authors Shannon and Dean Hale, Diana: Princess of the Amazons is heartwarming and perfect for the middle-grade audience, yet still has some depth to appeal to older readers.

Throughout the novel, Diana struggles with a lot of different problems. All of them — from being unsure how to fit into her community to trying to understand what she should do now as she grows up — are extremely important issues. Middle-grade years are all about that awkward transition from childhood to teenage years, and with life changes like going from elementary to middle to high school, this book hits on the key struggles for this age group.

Even better, it doesn’t entirely resolve them either. Yes, Diana saves the day and learns to trust in her power as an Amazon, but there’ more to it than that. She’s still the only kid on the island. She still has to work hard to understand who she is on Themyscira. However, now she has the tools and the confidence to face her uncertainties and her fears. That’s the ultimate goal of any great novel. Diana: Princess of the Amazons gives its readers the knowledge to face their struggles as Diana does.

The visual style of Diana: Princess of the Amazons is beautiful and provides an interesting change from typical comic book art. Victoria Ying is an amazing artist, and her background in animation comes through clearly in this work. Unlike more traditional Wonder Woman comics, Diana: Princess of the Amazons takes on a more playful and soft feeling. Given her work as an artist for many beloved animated films — such as Tangled, Wreck it Ralph, Frozen, and Big Hero 6 — it’s pretty clear she’s amazing as this type of look and feel.

Since this is meant to appeal to younger readers and is following a younger Diana, this art style is perfect. The softness of the art feels comforting and helps readers feel truly connected to a woman who is ordinarily the very definition of extraordinary. The coloring by Lark Pien and lettering by Dave Sharpe add to this feeling by making the world of Themyscira bright and the text clean and easy to read.

Heart In Diana: Princess Of The Amazons

With a character as strong and beloved as Wonder Woman, it’s hard to imagine who she was before she donned her title. Diana: Princess of the Amazons tells a wonderful story of the girl behind the legend, giving us a look at her very human insecurities and fears. Of all the ways to describe this graphic novel, the best way to put it would be to say it’s full of heart. Diana’s character and story are moving and inspirational, and provide a delightful read for all ages.