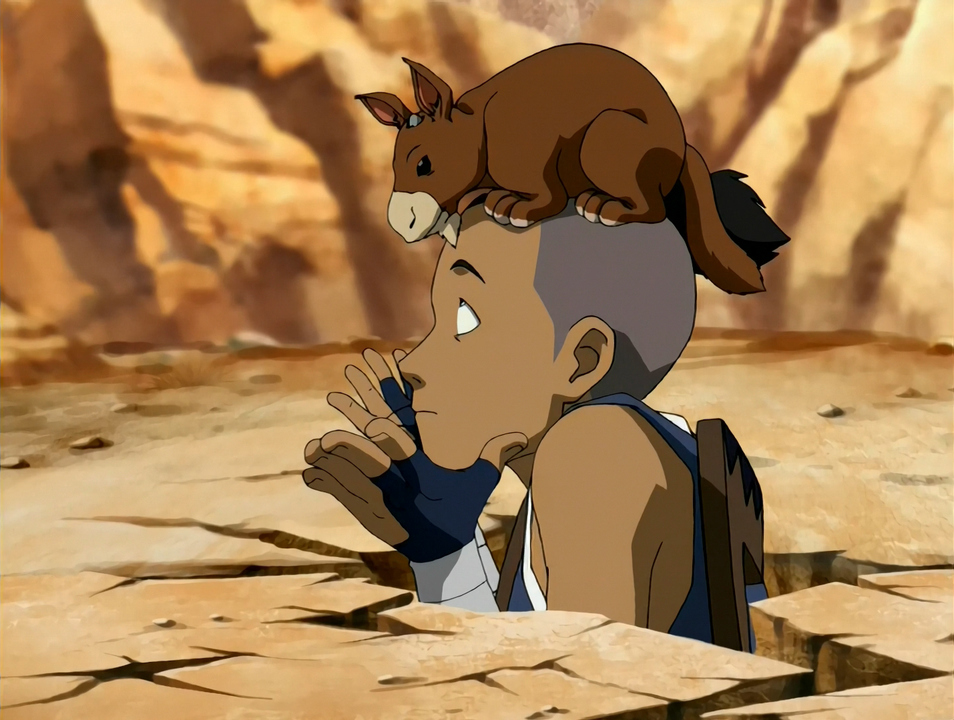 Welcome to Bae Watch Wednesday, where I tell you all about the fictional characters you ought to be crushing on. This week’s bae is Sokka of the Southern Water Tribe.

Sokka is one of the main characters of the best TV show ever, Avatar: the Last Airbender. He’s actually the first character we meet, fishing with his sister Katara in the Southern Water Tribe, where they live. Katara is a waterbender – a person with the ability to control water. In an argument with her brother, an untrained Katara unleashes powerful bending, revealing a mysterious iceberg. Shockingly, there is a person in the ice. Sokka and Katara free the boy from the ice and learn that he is an airbender, despite the fact that the Air Nomads were wiped out a century ago in the first action of the war.

Left in charge of the village after all the men went off to fight, Sokka is initially suspicious of the boy, Aang. He worries that it’s a trap set by the Fire Nation, who are close to winning the century-long war and decimating the Water Tribe. However, he and Katara get a huge surprise when they learn that Aang is actually the Avatar, who can control all four elements and is destined to bring balance. When the Fire Nation tracks Aang to their small village, he gives himself up to save the village, but the siblings follow anyway to rescue him.

They realize that Aang needs to learn how to control all the elements, not just air so that he can end the war. Sokka and Katara leave their home at the south pole to travel with and protect Aang on his journey. At first, it’s an interesting journey. Traveling the globe on Aang’s flying bison Appa, the three teenagers get caught up in some interesting scrapes. But they soon learn something terrible: if Aang does not defeat the Fire Nation by the summer, all will be lost.

They make it to the Northern Water Tribe, where they hope to find a waterbending master to teach Aang (and Katara). As a nonbender, Sokka is left to his own devices. He strikes up an unlikely friendship with Yue, the princess of the Northern tribe. However, when he thinks something more might be brewing, she reveals that she is already betrothed. When the Fire Nation comes to the north pole, Sokka lines up with the other warriors to protect the Tribe. Heartbreak is waiting, though; when the Fire Nation admiral kills the moon spirit, Yue sacrifices herself to save the day.

All three of our teen heroes are badly shaken by the Siege of the North Pole. Now that Aang has mastered waterbending, they move on with their journey, heading to the Earth Kingdom to find an earthbending teacher. They eventually found one in Toph, a young blind girl who has been fighting in secret earthbending tournaments. Toph’s family thinks of her as helpless and are unwilling to let her go with the Avatar, though she eventually runs away.

While in the Earth Kingdom, Sokka learns about a library hidden in the desert. He convinces the group to go there to look for intelligence that will help in the war. While there, he learns that the Fire Nation will be powerless during a solar eclipse, and that one is coming up. However, tragedy strikes in the desert. A vengeful spirit tries to trap them in the spirit world, and Appa is kidnapped by raiders. Left in the middle of nowhere with no transportation, things seem grim. Eventually, though, they escape and head to Ba Sing Se, the capital of the Earth Kingdom, to warn the Earth King about the eclipse and form a plan to win the war.

Ba Sing Se is mostly useless, as the city refuses to acknowledge the war. They are able to break through to the king and start planning their attack, with Sokka as the mastermind. They will strike the Fire Nation in their capital on the day of the eclipse and hopefully end a century-long war. There’s also a surprise in store: Katara and Sokka’s dad, Hakoda, who had left the village to fight in the war, is in the Earth Kingdom. He joins them and various allies from the past months traveling the world as they prepare to attack. Things don’t go as planned, sadly, and the team is left on the run.

With time running out, things are dire. Then, the Fire Nation Prince Zuko, who had pursued them for months, defects and joins them, teaching Aang firebending. Zuko’s addition to the gang changes things up a bit. Notably, he is able to give Sokka information about where Hakoda would have been taken prisoner after their failed attack. The two of them break into the prison and rescue not only Hakoda, but Sokka’s one-time flame Suki, a skilled warrior and nonbender like himself.

Zuko reveals that the Fire Nation is planning to destroy the Earth Kingdom and that they have to strike now before it is too late. Sokka again plans the team’s strategy, and he sets off with Suki and Toph to fight a fleet of airships attacking the Earth Kingdom. Between Sokka’s strategic mind and Toph’s bending prowess, they are able to defeat the whole fleet and save the Earth Kingdom, though they nearly die in the process. After Aang defeats the Fire Lord, they are able to see a new era of peace dawn. Finally, they can relax a little and just be kids.

Why Is Sokka Bae?

Sokka is hands down one of my favorite characters in a show teeming with excellent characters. Avatar: the Last Airbender has so many great characters and so many great storylines, but Sokka stands out to me. He’s a genuinely lovable character with a lot of redeeming qualities (though you might not know from his first few episodes).

One of the things that make Sokka great is his role as “the idea guy.” It would be easy for him to fade into the background of the show, as the only major character who can’t bend anything. Sokka’s surrounded by people who are masters at manipulating elements and pulling off magical feats, and he’s just the guy with the boomerang. But that’s selling him short – Sokka ends up being just as important as anyone else on team avatar when it comes to defeating the Fire Nation.

Sokka may not be a bender, but he is brilliant. He’s the one who always comes up with the team’s strategy and gets them out of tough spots. It was his plan to invade the Fire Nation on the day of the eclipse, and it was a well-thought-out and intricate plan. The reason it failed was not that his plan wasn’t good enough; it failed because the enemy acquired intel about the plan and could prepare. His strategy for defeating the fleet of airships is more successful. Three teenagers manage to disable an entire fleet thanks to Sokka’s intelligence and forethought. He also planned an escape from the Fire Nation’s biggest, baddest prison – and succeeded where no one had before.

And it’s not just strategy, either. Sokka is a mechanical genius as well. Early on in the series, he meets up with an inventor. The two worked together to create new technology, including flying balloons. When the inventor betrays them, Sokka’s ideas end up helping the Fire Nation war effort (even leading to the airships he will later destroy). However, he continues inventing and creates a plan for submarines that help in the invasion plan. He is able to come up with incredible new designs purely from his own mind.

We also see great character growth in Sokka’s story, though he’s overshadowed (as all arcs are) by Zuko’s redemption narrative. All of the characters in AtLA have the chance to develop and learn, and Sokka is no exception. When we first met him, he was a brash, sixteen-year-old boy. He was given the responsibility for the safety of the village and takes it very seriously, maybe even too seriously. He’s not much of a warrior, and a little condescending to his sister, both for her “magic” powers and her gender.

Things change as he embarks on this great adventure. The first real change comes when the team encounters the Kyoshi Warriors, a female fighting group founded in honor of a previous Avatar, Kyoshi. Sokka’s sexism is on full display, as he doesn’t believe a girl could have defeated him so easily. He soon realizes, though, that he was in the wrong. He admits so, and learns from the Warriors humbly, even forming a relationship with their leader based on respect and admiration, not condescension.

A later example of Sokka’s dedication to self-improvement comes in the final season. Surrounded by bending masters who are capable of insane feats, he starts feeling very insecure. He tries to convince a swordmaster to train him – he may not be able to bend anything, but he can learn to be the best fighter he can. Things don’t go quite as planned, but Sokka is able to impress this master warrior with his ingenuity and persistence, if not his skill. He’s come a long way from the kid who only had a boomerang and a failed watchtower, all because of his dedication to bettering himself and proving his worth. His insecurity has become a drive to improve, rather than a reason for self-pity.

What’s Not To Love About Sokka?

Avatar: the Last Airbender gave us something really special about Sokka. He’s very clearly the comic relief character of the show; he gets into numerous silly scrapes (cactus juice — ‘Nuff said) and is always good for a sarcastic quip. And he’s a good comic relief, always entertaining to watch and listen to. Sokka’s incredibly relatable, a good audience insert. He doesn’t have any of the magic powers of the other main characters and has a deadpan reaction to most things that occur. But AtLA avoids the trap many other shows fall into (*cough* Voltron *cough*) and doesn’t sell their comic relief character short.

Sokka might be comic relief, but he’s so much more than that. He’s the idea guy, the one who comes up with strategy. His team may be superpowered and able to achieve feats he can only dream of, but they’re lost without him. Their powers mean nothing without leadership or guidance. And Sokka always does what he can to prove his worth, from inventing machines that give their plan a chance at success, to apprenticing himself to a weapons master so that he can fight as well as his friends, even without their magical powers.

Sokka’s story is just one part of an incredibly well-developed show, but it gets its chance to shine. We saw real character growth over three seasons. The sixteen-year-old boy we met in the first episode has come real far by the end of the show, and his growth is inspiring to watch. But Sokka’s still the same lovable character throughout the show (and moving forward in the comics as well). AtLA has an amazing cast of characters, but Sokka will always be one of my favorites. It’s hard not to love this wise-cracking, insecure, genius mess of a character.