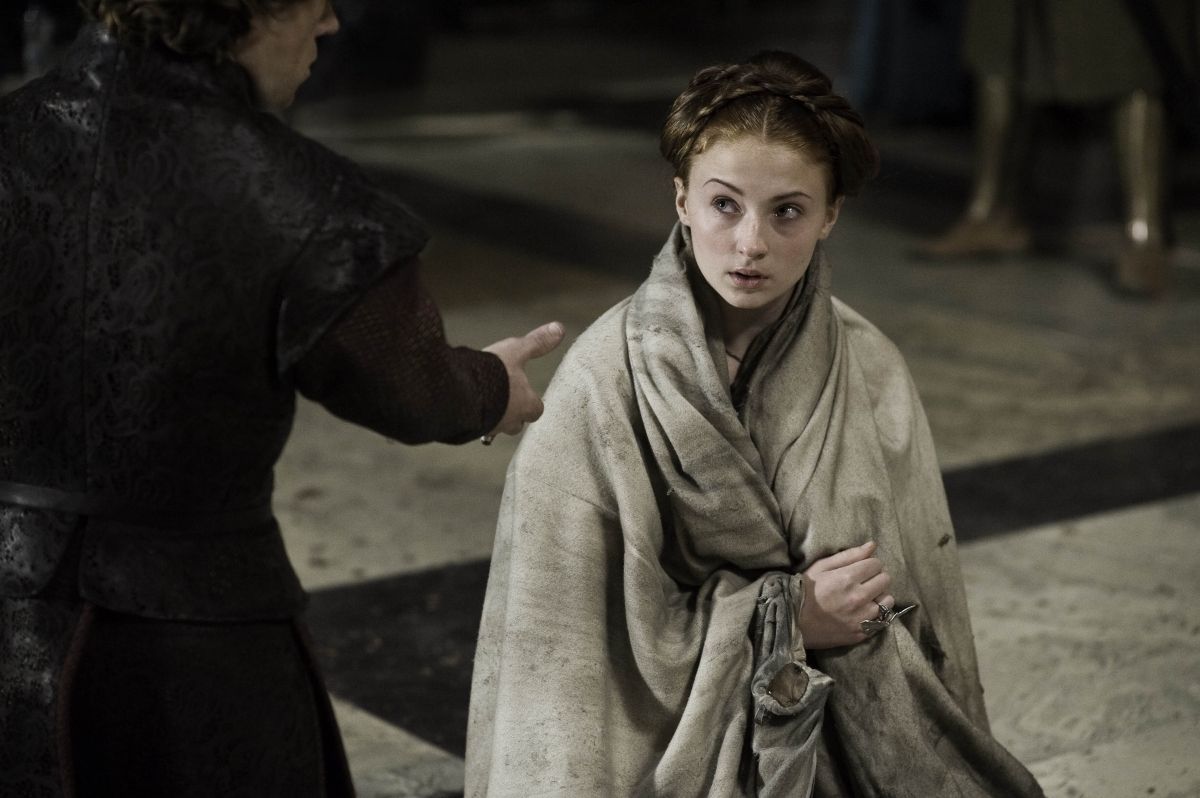 Welcome to Bae Watch Wednesday, where I tell you all about the fictional characters you ought to be crushing on. I’ve finally caught up with Game of Thrones (I know, I’m behind the times) so I want to talk about my favorite character — Sansa Stark.

Who is Sansa Stark?

Sansa is the oldest daughter of Ned and Catelyn Stark, the second of their five children. Her siblings are/were Robb, Arya, Bran, and Rickon. House Stark is one of the Great Houses of Westeros, and control the North from their seat at Winterfell. At the beginning of Game of Thrones, Ned is Warden of the North and soon becomes Hand of the King to his good friend King Robert.

Early in the show, when Ned travels to King’s Landing to take up his post, Sansa and Arya accompany him. Sansa is betrothed to Prince Joffrey, Robert’s heir. Sansa is in heaven, as she has always dreamed of marrying a prince. Arya scoffs at her and thinks she is foolish; Arya may be right as Joffrey is soon shown to be cruel and manipulative.

Joffrey later becomes king after the death of King Robert. Ned has discovered that Joffrey is a bastard and supports Stannis, Robert’s brother. Joffrey discovers the truth and beheads Ned, shocking Sansa who had to plead for mercy. This starts the War of the Five Kings, as Robb Stark starts a rebellion against Joffrey for the murder of his father. Robb becomes King in the North, and Sansa is stuck at King’s Landing, sister, and daughter of a traitor.

Sansa continues to be tormented by Joffrey, but she starts to show signs of rebellion. She also learns to lie and manipulate, something that is vital for staying alive in King’s Landing. Joffrey soon throws Sansa over to marry Margaery Tyrell instead, which pleases Sansa as it frees her from Joffrey. Unfortunately, he still has control over her as king, and she isn’t much better off than she was before.

Things improve slightly for Sansa when Joffrey spitefully arranges for her to marry his uncle Tyrion, a dwarf. Although it is meant as an insult, Tyrion turns out to be far kinder than the other Lannisters. He works to protect her and mitigate Joffrey’s cruelty. Tyrion even promises Sansa they won’t consummate the marriage, as he does not wish to be married to a child.

Unfortunately for Sansa, that’s as good as things get for her. Her brother Robb and her mother are betrayed and murdered at a wedding feast, ending Robb’s rebellion against the crown. Their bodies are desecrated, and Sansa is mocked even more for her family’s failure. Later, at Joffrey’s wedding, he is poisoned and Sansa, along with Tyrion, is a prime suspect. She flees King’s Landing with Littlefinger, a friend of her mother.

Littlefinger is the least trustworthy person in Game of Thrones — which is saying something — so Sansa’s not much better off with him. He takes her to the Vale, where her aunt Lysa is, but Lysa is mentally unstable and jealous of Sansa. Lysa tries to kill Sansa for being close to Littlefinger, and Sansa watches as Littlefinger murders her aunt.

Later, Littlefinger arranges for Sansa to marry Ramsay Bolton, son of the man who betrayed her mother and Robb. She is revolted, but it would mean returning to Winterfell. Littlefinger promises that it puts her in a position of power, but the truth is far worse. Ramsay is crueler than even Joffrey, and rapes and abuses Sansa. She manages to escape and turns to her bastard half-brother Jon for help in reclaiming Winterfell for House Stark.

Now, Sansa has come into her own. She has been through absolute hell at the hands of the Lannisters and the Boltons, but rather than wilting; she has developed a steel spine. Even more, Sansa has watched the great political players in Westeros and learned from their example. Her help is vital in Jon — who does not carry the Stark name — securing the support of Stark bannermen to retake Winterfell.

Sansa faces off against Ramsay, who taunts her but does not back down. She tells Ramsay he is going to die, and turns away from him. Later, she makes this claim true when she uses her influence to win the Battle of the Bastards. Sansa seeks the help of Littlefinger and the Knights of the Vale, who turn the tide of the battle. After, she watches as Ramsay is eaten alive by his hunting hounds, smiling in victory.

Things aren’t over for Sansa yet though. Jon has retaken Winterfell and is named King in the North, but he warns of the impending great battle against the forces of the dead. He goes to Dragonstone to parlay with Queen Daenerys for aid. Sansa advocates against it, but Jon won’t change his mind. In his absence, Sansa rules the north as Lady of Winterfell and proves that she has learned much from her troubled past.

Arya soon returns to Winterfell, having had a troubled past of her own. The two frequently clashed as children, and struggle to find their footing as adults. Arya is suspicious that Sansa wants to take power away from Jon; Sansa worries that Arya will murder her. In the end, however, the two come together. They kill Littlefinger, who was manipulating things and prepare for the coming darkness together.

Why is Sansa Stark Bae?

Sophie Turner is a goddess. There are some supremely weird looking people in Westeros and in the Stark family. Sansa was lucky enough to take after her mother, with beautiful red hair, clear skin, and a spine of pure steel.

Also, I love that Sansa is taller than all the men around her. Watching her tower over Jon and Littlefinger really underscores her power.

Queen in the North

So basically the title King in the North is cursed — Robb was betrayed and murdered, Jon gave up the title to secure the aid of Daenerys. Why don’t we have a Queen in the North instead? It’s clear, watching Game of Thrones, that queens slay and kings die. In the north, things are no different. Sansa points out that Ned and Robb died because of stupid decisions, but she can help Jon avoid their mistakes.

Jon, being a Stark man, is stupid and ignores Sansa. He is, however, smart enough to leave her in charge while he goes on his mission. This proves to be his best decision yet. As Lady of Winterfell, Sansa is smart, decisive, and in control. Sansa learned a lot from great manipulators like Littlefinger and Cersei, Queen of Westeros. She puts this intel to good use and rules smartly.

Sansa thinks ahead. She knows that a long, difficult winter is here. Thinking this through, she makes plans to secure enough food to keep her people fed. She also knows the value of diplomacy and keeping her allies happy. Although she pulls on the Stark name, she knows that it alone is not enough to secure allegiance. She makes plans to keep all the north safe, not just Winterfell.

The northern lords seem to agree with me. They decreed Jon as King in the North, but aren’t really so sure of Ned Stark’s bastard. They disagree with many of his actions, like parlaying with Daenerys. On the other hand, they applaud Sansa for making smart decisions and looking out for the north. Sansa assures Arya she would never betray Jon, but the northern lords seem to prefer a Queen in the North to King Jon.

But when it comes down to it, Sansa Stark is genuinely a strong female character. Whereas Arya sneers at feminine pursuits, Sansa excels. She is skilled at sewing, enjoys dancing and gossip, and dreams of romance, not victory. Sure, Sansa grows out of these notions of romance, but she still retains an innate femininity. The great thing about her character, though, is that this femininity does not detract, but rather adds, to her character.

Sansa is one of the strongest characters in Game of Thrones. She has survived brutal torture and rape, betrayal, and a culture of deceit. She emerges from all of these things secure in her identity and with an iron will. She does all this while still maintaining a feminine aura. Arya mocks Sansa by naming her sword Needle, but Sansa uses her sewing skills to send a message. She dresses for power and makes Jon a Stark cloak to show support.

Sansa also does not appear strong by putting other female characters down. Of anyone, she has just cause to hate Cersei. But rather than putting her down, or calling Cersei a whore, she reluctantly admires Cersei and admits she learned a lot from the ruthless queen. In an era where so many “strong female characters” reject femininity and seek to be ~not like other girls, Sansa is an example of someone both strong and female.

I’ll admit, early in Game of Thrones Sansa isn’t the best character. She is young and foolish, but what’s great about her character is that she learns and grows. She truly develops as a character, reflecting that the torture she has endured serves to make her stronger, rather than only serving shock value.

Season 7 Sansa Stark is my queen. I resisted watching Game of Thrones for years because I was worried it would trigger my anxiety. However, after seeing all the furor about her marriage to Ramsay, I was reluctantly intrigued. I started reading episode recaps to follow along with Sansa’s story. When Season 7 ended, with Sansa obliterating Littlefinger, I was hooked. I had to watch the show so I could properly appreciate this character.

Sansa Stark is great. She’s a strong female character who doesn’t reject being female. She embraces her femininity and uses it as power. Sansa learns from the great manipulators of Westeros and does not reject the lessons she learned solely because they came from her enemies. At the same time, she retains that Stark goodness, looking out for her people and her family.

I only watched Game of Thrones because of Sansa Stark. Yes, through watching I have come to appreciate other characters as well. (I love Brienne of Tarth! Strong ladies ftw!) But my interest was captured by this girl who suffered so much and came out on top. In the Game of Thrones, you win, or you die. Sansa Stark is alive. She may not remain that way (it is Game of Thrones, after all), but so far she’s doing a kickass job.