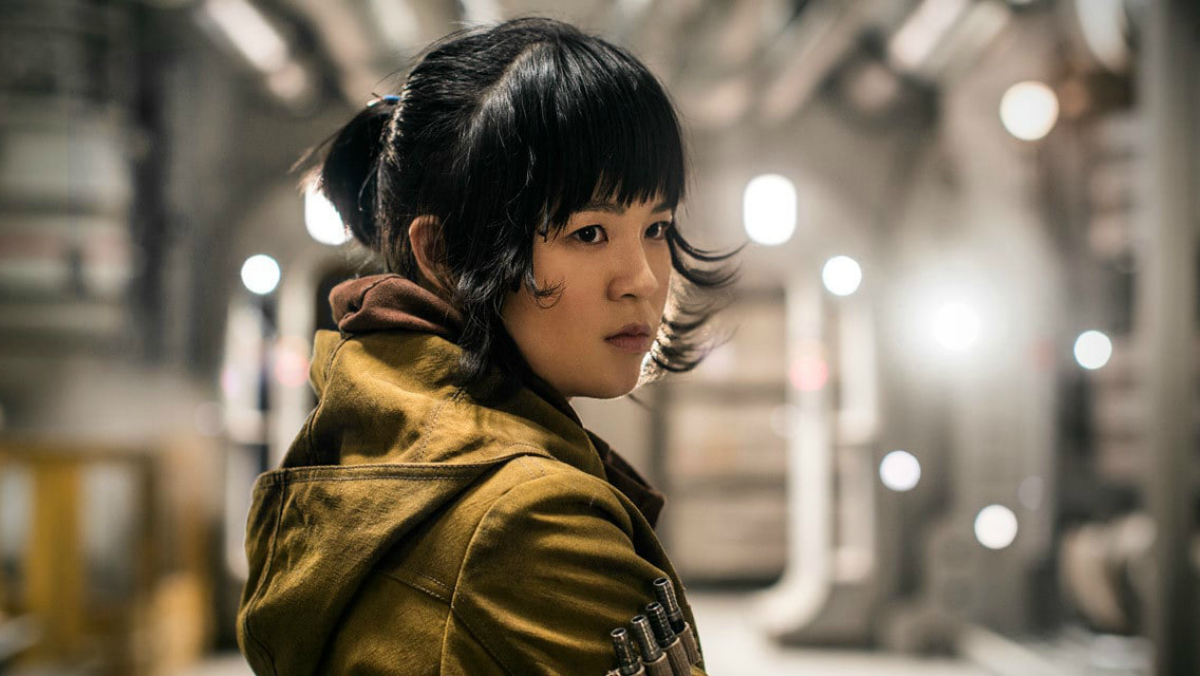 Welcome to Bae Watch Wednesday, where I tell you all about the fictional characters you ought to be crushing on. In honor of The Last Jedi coming out this month, all my December baes will honor my original fandom, Star Wars. My final December bae is a new favorite: Rose Tico.

Who is Rose Tico?

Rose Tico is a breakout star of the latest Star Wars movie, The Last Jedi. Although she appears in only the one film so far, Rose made a big impact. Even before the film premiered, there was a lot of buzz about Rose being the first female Asian-American major character in Star Wars. With so much hype to live up to, it would have been easy for Rose to be a letdown, but that didn’t happen.

At the start of The Last Jedi, Rose Tico is almost a nobody in the Resistance. Her sister Paige is a bomber under Poe’s command, and we see her heroically sacrifice herself early in the movie to destroy a Dreadnaught. Paige is an incredibly impressive character for all that she’s on screen for so little time. Her death makes Rose’s character all the more compelling.

Our first glimpse of Rose is her crying, mourning the death of her sister. She finds Finn, who is sneaking into an escape pod to try and save Rey from the death trap that is the current status of the Resistance. At first, Rose is starstruck. To her, Finn is a big-time Resistance hero. She stumbles over her words, blushing at confronting her hero. Rose even mentions her sister, who had admired Finn as someone who did the right thing.

But when Rose realizes Finn is deserting, she does not hesitate to do her duty. She had already mentioned to Finn that she had stunned several other deserters that morning. Without a second thought, she stuns Finn just the same. Later, she begins to drag him to the brig to report him for desertion. Rose may have met her hero, but she doesn’t let hero worship get in the way of doing her duty.

Rose’s confrontation of Finn shows that her dedication to the Resistance reigns supreme. This is further underscored when Rose allies herself with Finn for an incredibly dangerous mission. Finn reveals that the First Order has tracked them through hyperspace. Rose doesn’t let this seeming impossibility slow her down; in fact, she immediately begins thinking of ways to dismantle this tracking.

Although she was wildly disappointed in her hero, Finn, she recognizes that she needs Finn’s help. With his insider knowledge of the First Order, Rose believes she may be able to stop the tracker. The two work together, getting Poe Dameron on their side.

Poe seems confused that the two of them know each other. Rose says it was “luck” that they met… but not saying if it was good or bad luck. Hesitation aside, however, this moment is important because she doesn’t reveal Finn’s plans for desertion. Finn shows noticeable anxiety that she might, but Rose doesn’t care about that so much as she does beating the First Order.

Rose and Finn then set off to Canto Bight, a casino planet, to find the missing piece of their plan:  a code breaker to get them onto the First Order’s ship. Finn is agog at the wonder and splendor of Canto Bight, but Rose reveals the city’s darker underbelly. She also reveals her background as a child of a mining planet destroyed by the First Order, giving more depth to Rose’s character.

The plan on Canto Bight goes awry, and they must escape imprisonment. Rose takes this opportunity to free some ill-treated fathiers, racing creatures that she was at first pleased to see. However, the fathiers are abused by their handlers, and Rose takes great joy in helping them escape the casino.

Rose then goes to the First Order flagship with Finn and their newly acquired thief, DJ. DJ demands payment to help them board the ship, and Rose gives up her medallion. This necklace is important to her because Paige had had one just like it before her death, but Rose views the success of the mission as more important than her sentimentality. She does later get it back, but it’s a crucial moment for her character.

When they are caught, and DJ turns on them, Rose helps Finn escape. After Finn’s fateful duel with Phasma, Rose joins BB-8 in helping Finn get to one last unscathed ship. They make it to the Rebellion base on Crait, where they rejoin their friends, although Rose is dismayed to see how few have survived.

Later, Rose gets one last moment of glory when she works with Poe, Finn, and others to stop a First Order cannon from breaking into their base. She pilots her speeder elegantly, even helping Finn get the hang of things. However, Poe orders them to break off, saying the mission is doomed to fail. When Finn refuses, Rose stops him.

This is the greatest moment for her character. She sacrifices herself to stop Finn. Then, Rose has the best line in the film: “that’s how we’re gonna win… not fighting what we hate, saving what we love.” In one short moment, Rose sums up the Resistance and gives hope for good again.

Rose’s sacrifice injures her greatly, and this inspiring moment is the last for her character (conscious, at least). She doesn’t die, however, and Finn helps get her to safety. When we last see her, she is unconscious on the Falcon, where Finn guards her and tries to keep her safe.

Why is Rose Tico Bae?

Rose Tico is, hands down, my favorite new character in The Last Jedi. Even before I saw the movie, I was intrigued. Kelly Marie Tran is a ray of sunshine and utterly adorable. It’s impossible not to love her. This translates well to Rose, who is also adorable. Sure, I think Rose could (desperately) use a new haircut, but she’s pretty and sweet, which more than makes up for her (lack of) style.

But way more important than her looks is Rose’s spirit. Rose Tico is the heart and soul of this movie. A lot happens in The Last Jedi, and it was easy to get overwhelmed in all the story. It also felt like Rose and Finn’s storyline was a bit wasted, when their mission to Canto Bight fails in so many ways.

But despite all that, I was happy to see Rose every time she and Finn came back on screen. Rose brings a depth of emotion to Star Wars that, as much as I love them, Rey and Finn haven’t quite. Perhaps this is because Rey and Finn are not truly a part of the Resistance, but rather outsiders looking for a place to belong. Rose, on the other hand, belongs in the Resistance.

Rose also humanizes the Resistance. Sure, we have old favorites like Leia assuring that, no matter what else, we’ll root for the Resistance. But Rose shows that it isn’t just the big shots up top that matter. Rose is a lowly member of the Resistance. She has no command, leads no armies. She’s just a soldier who does her job and believes wholeheartedly.

When we see Rose mourning her sister, it also really underscores the cost of the Resistance. Poe is berated for leading his pilots to death, but seeing the survivors grieve brings that point home. Rose lost her sister, who we can assume is her only family. Now, all she has left is the Resistance, and she gives them her all.

One of my favorite lines from the trailer for The Last Jedi came from my main man Poe: “We are the spark that will light the fire that will burn the First Order to the ground.” Poe refers to the surviving Resistance members, but really when you think about it, Rose Tico is the spark.

Think of Rose’s final line. Sure, it’s a little cheesy. But it’s also amazingly inspiring. She gives hope for the future of the Resistance by reminding Finn that they are fighting for good. The Resistance isn’t just resisting (sorry) the First Order. They’re trying to restore the Republic, to bring back justice and light and good. Rose helpfully reminds the audience of this at what seems like the Resistance’s darkest hour.

Rose also sparks something in Finn. At the beginning of The Last Jedi, all he cares about is Rey. He is willing to desert the cause to save her. But throughout the movie, Rose has a definite impact on him. She opens his eyes to the darkness of Canto Bight, which gives him more sympathy for what destruction the First Order has caused. And she shows him that it is important they keep fighting — as long as it’s for the right reasons.

Finally, Rose is the spark to the future of the Star Wars universe. In a blink-and-you’ll-miss-it moment, which I only caught the second time I saw The Last Jedi, the child on Canto Bight at the end is shown to be Force-sensitive. He listens to the legend of Luke Skywalker and seems to show a promise for the future… and he’s wearing Rose’s Rebellion ring. Rose inspired this young boy, who may become a future hero himself.

You guys, Rose Tico, made this movie for me. There was a lot that I didn’t like, but Rose made this an enjoyable experience. She’s a new character that brings home important lessons and inspires the characters and audience alike.

It’s also important to note that Rose Tico is symbolically very important. In all the vast history of Star Wars, we’ve never had a major female character played by an Asian-American. Sure, Rogue One gave us a ton of diversity, including absolute gems Chirrut Imwe and Baze Malbus. But Kelly Marie Tran has talked about how amazing it was to be a pushing point for diversity in such a huge franchise.

After watching The Last Jedi once, I loved Rose Tico. After watching it the second time, I’m ready to sign up for the Resistance. Rose Tico should be a Rebellion recruiter. She embodies everything that is good and just about the movement, and her dedication and purity make her one of my favorite characters in a long, long time.

Rose Tico is the heart and soul of Star Wars. Rose Tico is the spark that will light the fire that will destroy the First Order. But most importantly, Rose Tico is an icon to young girls everywhere. You too can be important, even if you feel like a nobody. Do the right thing, stick up for your beliefs, and follow your heart, and you, like Rose Tico, can be a hero.