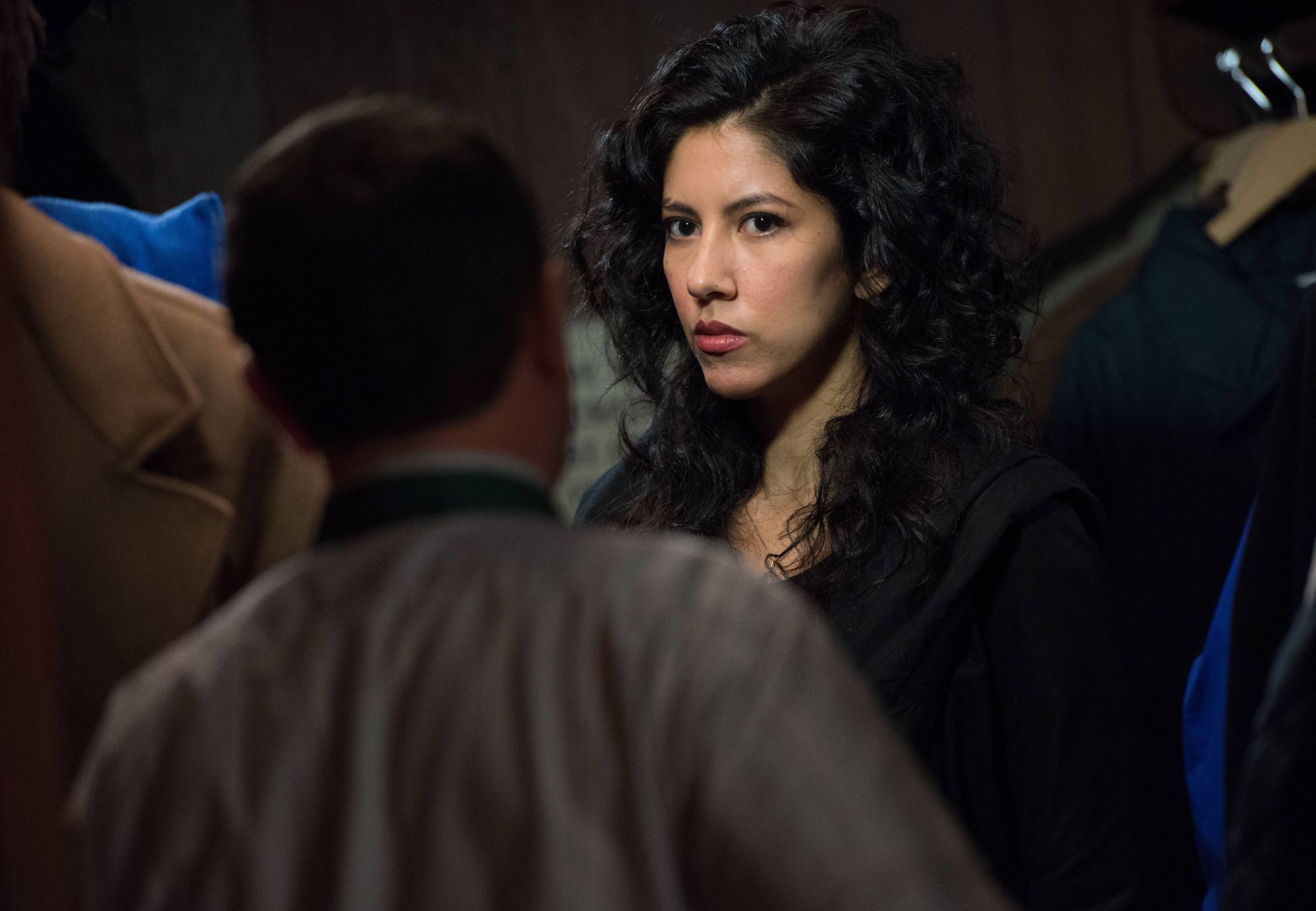 Welcome to Bae Watch Wednesday, where I tell you all about the fictional characters you ought to be crushing on. This week’s bae is honestly #goals: Rosa Diaz.

Who Is Rosa Diaz?

Rosa Diaz is one of the primary characters of Brooklyn 99. She is a part of the main ensemble cast, as one of the detectives of the 99th precinct. Rosa is a bit of a mystery, at least at first, as she is very closed-off and private. She insists on keeping her colleagues at arm’s length. Fortunately or unfortunately, depending on your point of view, that plan doesn’t work for too long. Rosa’s colleagues at the 99 are very much a family, and there’s only so long that she can keep them at bay. This is especially true because one of her fellow detectives, Charles Boyle, thinks he is in love with Rosa.

Despite her gruff exterior, Rosa is not a bad person or particularly mean. So, although she does not reciprocate Charles’ feelings, she doesn’t want to hurt him. Things get a little more complicated when Charles saves Rosa’s life on a mission, but even then they part friends. When Charles moves on and gets engaged, Rosa fights to be invited to the wedding because she wants to support her friend. Rosa, in turn, develops her relationships with other detectives over the first few seasons.

Amy Santiago, a fellow Latina detective, at first seems to be competitive with Rosa. Amy is determined to be captain one day and bristles when Rosa is offered a promotion. They come to terms, however, and see that cooperation is more important than competition. Jake Peralta, the main character of Brooklyn 99, was friends with Rosa at the academy. Their friendship is tested when they work a case together, and Jake breaks Rosa’s trust. In the end, they have to repair their friendship, and Jake has to rebuild that bridge. Their friendship survives the test, even becoming stronger.

Rosa’s distance takes a solid hit when she begins dating Marcus, the nephew of her boss Raymond Holt. She is no longer able to keep everyone at work out of her personal life. Luckily for Rosa, Holt is just as invested at keeping work and personal life separate. Unluckily for both of them, Marcus and Kevin, Holt’s husband, force them to interact. As her relationship develops, Rosa is put in an uncomfortable situation. She’s unused to serious relationships, and she really wants things to go well with Marcus. This leads to her asking Boyle, of all people, for help. He’s glad to help out his friend, however, having moved on.

Unfortunately, Marcus is too different from Rosa for them to last. He is very emotional and open, something she finds completely strange. She later seeks help from Holt in ending the relationship, leading to them sharing a wholly unexpected bonding moment. For two people who are generally unemotional, sobbing together was a shock. Rosa moves on, continuing her life. When Detective Adrian Pimento comes back from undercover with serious boundary issues, she finds him fascinating and attractive.

Although it seems like a bad decision, she and Pimento begin seeing each other. They even get engaged and almost rush into marriage. They stay together for a while but eventually separate when Rosa realizes her feelings have changed. In the meantime, life at the 99 continues. Rosa and Jake find themselves tangled up in a corruption scheme and try to take down a high-ranking detective. This ends up with them in jail when the detective frames them. Rosa and Jake manage to keep things together and eventually are exonerated, proving that the detective was corrupt.

After her experience in prison, Rosa makes the choice to reunite with her family. In the past, she had distanced herself. She didn’t want to be a part of a big happy family and was perfectly fine cutting them out of her life. After prison, however, she seeks to reconnect and reestablishes a relationship with her parents. This is a good thing and gives Rosa the chance to have the family connection she always wanted. It’s also a sign of how she’s opened up over the years, changing as she allows her relationships with her friends to soften her edges.

The bad thing is that Rosa’s desire to reconnect with her family puts a new stress in her life. When she starts dating a woman, she comes out to her 99 family as bisexual. They are overwhelmingly supportive, which makes sense since Captain Holt is openly gay. Rosa’s actual family, however, is a different matter. Rosa’s conservative parents are a hurdle that she is afraid to face. In fact, when Rosa thinks about coming out, she asks Jake to help her tell her parents. They mistakenly think that Rosa is actually Jake’s mistress, and say that they’d prefer that to her being gay.

This leads to a huge dust-up, as Rosa can’t believe they’d be so negative about her sexuality. They eventually mend fences, but Rosa’s mom still has a hard time with her daughter being bisexual. Rosa isn’t about to let that dictate her life, however. When she breaks up with her girlfriend, she plans to stay single but forms a close connection with a woman she meets on Jake’s wedding day. Things might lead somewhere in the next season — we can only hope.

Why Is Rosa Diaz Bae?

Add in the fact that Beatriz, like Rosa, is openly bisexual, and you’ve got a real dreamboat. Beatriz penned an excellent essay in GQ last fall about her upcoming wedding, and how the fact that she was marrying a man did not make her any less bisexual. As someone who has faced accusations of not being bi enough for being married to a man, that was game-changing to read. Stephanie Beatriz is an amazing person, inside and out. And she makes Rosa Diaz just as amazing.

One of the best things about Rosa Diaz is how she is an unabashedly kickass individual. As a female detective, she could have fallen into any number of stereotypes. She could be the damsel in distress that all the male cops have to rescue; the catty, competitive “not like other girls” character; the femme fatale; the cop determined to prove her worth (an unfortunate but accurate label for Amy Santiago).

Instead, Rosa is allowed to be the badass. She’s easily the toughest person at the 99, even including the male detectives and the incredibly buff sergeant Terry Jeffords. There’s a reason she’s paired off with Pimento when he comes back. Both are incredibly intense, sometimes violent, unpredictable people. Rosa has a lot of great moments in the show to reflect her status as the badass of the 99. My favorite is when she says “what kind of woman doesn’t have an axe?” She also is frequently shown with a variety of bladed weapons, which we all know is my type.

But Rosa isn’t just a badass. That would make her a one-dimensional and boring character. Pimento is one-dimensional: he’s just intense, to the point of seeming crazy at times. Rosa has a grounding that adds to her charm. Pimento is laughable, and you’re entertained when he’s there, but there’s no connection.

We connect with Rosa Diaz because she is a badass, but she’s so much more. She’s a good friend, taking the time to support Charles when he thinks he’s in love with her, or telling Amy they should support each other instead of tearing each other down. She may try to close off her emotions, but she’s a good friend and that makes her incredibly likeable, not just interesting.

Brooklyn 99 as a whole is an amazing show for representation. The fantasy world of the 99 presents a better world, where black cops knock down racial injustice, women are treated fairly and with respect, and an openly gay man can be the captain of a precinct. But even among the wonderful representations that Brooklyn 99 gives us, Rosa Diaz stands out. Rosa would almost feel like an attempt to reach some sort of diversity quota if she weren’t so genuine and likeable. Because Rosa does check off a lot of boxes: she’s female, Latina, and bisexual.

As a female Latina cop, there’s a lot to love. Though she’s a woman, she’s not depicted as any less capable than her male counterparts. In fact, Rosa is far more kickass than any of her colleagues and is given leadership roles and a chance to shine. Rosa’s Latina heritage comes through when her family shows up, and Pimento even talks about learning Spanish to connect with her family.

Rosa’s bisexuality is an amazing thing to witness. So often, non-straight characters are given the short end of the stick when it comes to TV. Gay or lesbian characters are often given stereotypical roles, and their storylines typically end in tragedy. But bisexual characters? They might as well be unicorns for how often they show up.

Instead, characters are shown as “not liking labels” or some other such nonsense. It’s meant to show that a character is neither gay nor straight, but for some reason, saying bisexual is unacceptable. Rosa Diaz said screw that. We get to see Rosa openly label herself bisexual, multiple times. We get to see her confront her family’s outdated ideas about her still liking men. It’s amazing to watch and long overdue.

Rosa Diaz is a game changer. For a bisexual person, seeing someone who is so amazing and badass openly and clearly state that they are bisexual is a new and wonderful experience. Rosa was great even before we knew she was bi. But now that we know, it’s a whole new facet to love about this amazing character.

While Jake Peralta is arguably the main character of Brooklyn 99, it’s definitely an ensemble cast and everyone plays their part. Rosa is a huge part of the show, and she brings a lot of enjoyment to many fans. She’s an interesting foil to Jake’s open, heart-on-sleeve approach to life, and their friendship is fun to watch develop. For many fans, Rosa is a long overdue chance to see themselves on screen. Because she represents several underrepresented communities, Rosa is an amazing chance to see a better portrayal of many communities.

(Though, importantly, Rosa isn’t the only representative; there are other female characters, other Latina characters, and other LGBTQ+ characters, showing Brooklyn 99 takes representation seriously.) But Rosa isn’t great just because of what she represents. Rosa is just a purely likeable character. She’s probably not everyone’s cup of tea, but she’s definitely mine. A badass woman who doesn’t take any shit? Sign me up. I love watching Rosa kick ass, take down criminals, and unsheathe a significant amount of knives.

As one of my friends put it, “Rosa is both goals and the love of my life.” I think that sums things up pretty well. Rosa Diaz is an amazing character.  She’s interesting and dynamic. She’s tough and inspiring. She represents so much to so many. How could you not love Rosa Diaz?