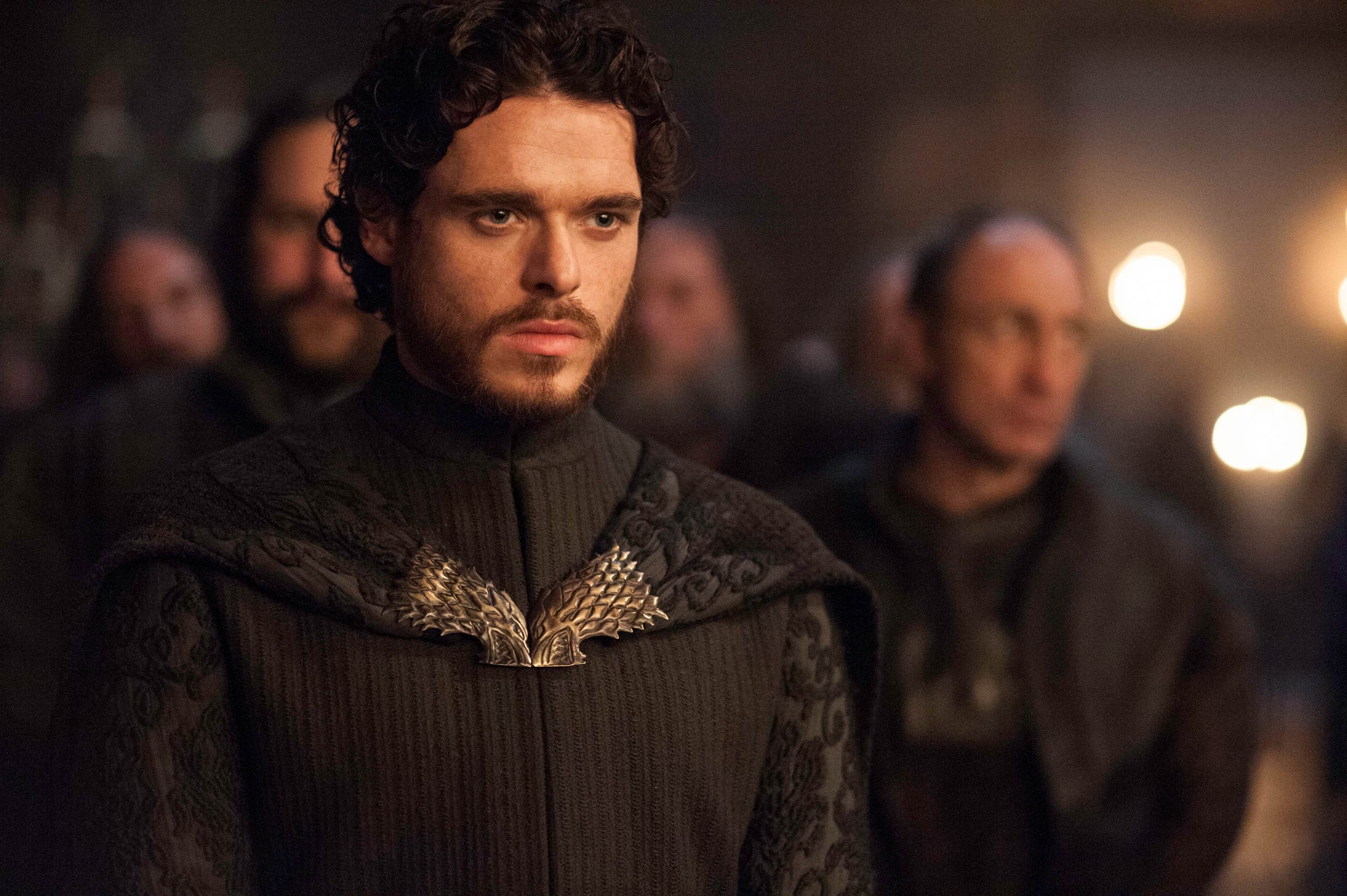 Welcome to Bae Watch Wednesday, where I tell you all about the fictional characters you ought to be crushing on. I’ve got Game of Thrones on my mind so this week’s bae is Robb Stark! Content Warning: As this article discusses Game of Thrones, and in particular the Red Wedding, be aware that there are some graphic details. They are mostly confined to the final section.

Who Is Robb Stark?

Robb Stark is one of the primary protagonists of the early seasons of Game of Thrones. He is the eldest son of Ned and Catelyn Stark, the lord and lady of Winterfell. For the first few episodes, Robb is not a major player. He is just a kid who has lived a privileged life but isn’t spoiled or mean-spirited. He loves his family — even his bastard half-brother Jon Snow — and his life.

Things start to change for Robb when Ned goes south to King’s Landing to become the Hand of the King. King Robert Baratheon, for whom Robb is named, is Ned’s best friend and claims he can only trust Ned to do what needs to be done. King’s Landing is a pit of snakes, full of schemers and their plots. Robert needs someone unfailingly honest like Ned to keep the country safe. In Ned’s absence, Robb becomes the stand-in Lord of Winterfell. Although Robb has been training to be Lord of Winterfell all his life, it’s not a good time to take over. First of all, he’s still just a teenager; he shouldn’t be taking over from his father for many years yet.

But worse than that is the mystery unfolding at Winterfell. While the king and his retinue were at Winterfell, Robb’s brother Bran fell from a high tower and ended up in a coma. Given that Bran is a notorious climber, it shouldn’t be too suspicious, but the fact that he fell is worrying. Robb and his mother begin to suspect the king’s in-laws, the Lannisters, of foul play. Their suspicions are made worse when they learn that the last Hand of the King was murdered. But things really come to a head when an assassin breaks in to kill Bran.

While Catelyn goes to King’s Landing to confer with Ned on the Lannisters’ plotting, Robb keeps things going smoothly at home. He takes care of Bran after he wakes up. When Tyrion Lannister shows up, Robb is cool with the man who may have tried to kill his brother. Tyrion is impressed by Robb’s lordly manner, if a little perplexed by the reaction. He gives them plans for a saddle to allow Bran, who can no longer walk, to ride.

When Bran is out riding, exulting in his freedom, a group of wildlings attack. Robb and his foster brother Theon Greyjoy stop them, although Robb and Theon have an argument about Theon not being a Stark. Other than this one incident, though, things go pretty smoothly for Robb Stark, Lord of Winterfell. But everything changes when King Robert dies and Ned is arrested for treason. Robb receives a letter from his sister Sansa, who urges him to come to King’s Landing and swear fealty to the new king. Robb recognizes that his sister is being held as a captive, while his father faces certain death.

Unwilling to stand by and let this happen, Robb takes action. He puts out a call for the Stark bannermen, houses who have sworn allegiance to House Stark. When all the banners are gathered, Robb tells them that they will be marching south to take Ned back by force. Though there are some rough patches when the men balk at following a teenager into battle, Robb’s determination wins them over. They marched south, getting into skirmishes with Lannister forces. Robb has early victories, surprising those who dismissed him as a boy and even managed to capture Jaime Lannister, brother of the king and the commander of the Lannister forces.

King In The North

All of Robb’s victories become hollow when he learns that Ned has been executed. He is despondent, and only his mother can comfort him. At the war council, Robb and his men argue about which king — as there are now three claimants to the throne — they should support. But one man — who had initially been dismissive of Robb — says he will follow only one king, the King of the North. Robb takes up the mantle and they set out to regain independence for themselves.

As Robb keeps winning, the Lannisters are growing desperate. They have lost their bargaining chip in Ned and have no way of negotiating with Robb. Catelyn begs Robb to ransom Jaime Lannister for his sisters, but he says that would weaken his position by trading a warrior for two girls. He has other concerns, though, when Theon betrays the Starks. Theon had initially left to recruit allies, but took over Winterfell and holds Robb’s brothers captive. Robb is torn; he cannot fight on two fronts. Will he continue battling the Lannisters or go home and reclaim Winterfell?

Robb is also distracted by something new. When he meets a medic who is caustic about the casualties of his war, he is captivated. The woman, Talisa, begins to capture Robb’s heart. As much as he wants her, though, he is not free. Early in the war, he had agreed to marry Walder Frey’s daughter in exchange for use of Frey’s bridge. When Catelyn, who had arranged that deal, betrays Robb by setting Jaime Lannister free, he turns his back and marries Talisa anyway. This will come to haunt Robb when he, Talisa, and Catelyn are murdered by the Freys for revenge, ending the reign of the King in the North.

Why Is Robb Stark Bae?

THOSE EYES. Such pretty, piercing, bright blue eyes. That’s it. That’s all you need to know. Except there’s more. With wavy dark hair, those beautiful blue eyes, and a captivating presence, it’s no wonder that Richard Madden was chosen to portray Cinderella’s Prince Charming in the 2015 remake.

I could look at Robb Stark all day, and I’m sure I’m not the only one. And even besides that, there’s his voice. Robb Stark has a delightful accent. All the actors portraying the Stark children chose to model their speech after Sean Bean’s Northern accent, and boy am I glad they did so.

Robb Stark is lovable and cute in the first few episodes. It’s fun to see him with his siblings, who love and admire their big brother. Robb’s relationship with Jon Snow is especially touching. It would have made sense for Robb to resent the interloper in their midst; a bastard does not belong among regular children. But he doesn’t mind. He loves all his family, and Jon is his family. Robb is just a kid in these early episodes. He’s cheery, fun-loving, and overall cute.

But Robb really comes into his own when he starts taking on the responsibilities of the Lord of Winterfell, and, later, King in the North. The carefree kid disappears, which is sad. Robb is still just a teenager, and he shouldn’t have to grow up so quickly. But he takes on his mantle of responsibility well. When he is in charge of Winterfell, he takes his duties seriously. You start to see the commanding presence he’s capable of being when dealing with Tyrion Lannister. It comes out more strongly when he proves to his bannermen that he is capable of leading a war.

This is not to say that Robb becomes a strict, cold, and calculating person. The men don’t proclaim him King in the North because he is a domineering master and commander. They do it because they respect and even love him. As King of the North, Robb has to focus on a war. But he also gets to know his people. He doesn’t shy away from helping Talisa with a surgery even before he knew her. Robb is still a good person at heart. But he also knows he needs to lead. He manages a delicate balance of firm hand and gentle touch, and that makes all the difference.

The Starks are a good, kind, and honorable family, something that cannot be said for most people in Westeros. They believe in doing the right thing and taking care of their people. It’s clear that Robb is the product of his family. Like his father, Robb is honorable and a good leader, dedicated to his cause and his people. Like his mother, Robb is fierce and dedicated to his family. But he manages to avoid some of the worst qualities of each.

Ned Stark was a good man. He was also the biggest idiot in Westeros. Ned’s overwhelming sense of honor led him to his doom. Yes, it’s a good thing to be concerned with doing the right thing. Ned believed in justice, not vengeance, and he believed in mercy. Those things led directly to his death. Because he believed in the good of other people, he didn’t see the trap that was coming for him. Robb has Ned’s dedication and sense of honor, but he doesn’t let it control him to the extent it does Jon.

That’s because Robb Stark is also the son of Catelyn Tully. Her influence helps temper the foolishness that comes from Ned. Catelyn is capable of being ruthless if necessary. While she also believes in doing the right thing, she doesn’t trust others to do so unless they are her people. She’s far more pragmatic than Ned was, and her staying influence on Robb helps him avoid Ned’s end (though they both will be betrayed by people Catelyn trusted, so it’s kind of a mixed bag).

This is not to say that Robb is perfect. Choosing Talisa over honoring his promise gets him killed. But he strives to be the best person he can be, and to honor his parents.

Robb Stark is one of the best characters in Game of Thrones, and his story is interesting. There are many deaths in Game of Thrones; even the main characters like Ned are not immune to the destruction of George R. R. Martin’s pen. And while not every death is tragic (get rekt Littlefinger), some are truly heartbreaking, like Lady’s death at Ned’s reluctant hand.

Few things compare to the tragedy of Robb Stark’s death, though. Part of this is because it is one of the most brutal, cruel, and unnecessary deaths in the show. The so-called Red Wedding, where Robb and his family were murdered, is considered one of the most traumatizing experiences in a thoroughly traumatizing show. There’s the cruelty of it; Talisa is pregnant and is stabbed repeatedly in the stomach before being murdered. There’s the vile behavior afterward, when Robb’s head is replaced by the head of his , also murdered. That sickens me to the point where I can hardly think of it without crying or being sick.

But even aside from the baseless awfulness of Robb’s death, there’s the tragedy that this character, who is good and interesting, comes to an all-too-sudden end. Robb died less than halfway through the show. We dedicated a lot of time to his character. Robb’s storyline is one of the major plot threads through seasons two and three. We see Robb win battles and become a king. We see Robb make mistakes and horrible decisions. Robb Stark grew, and we got to see that growth. And then it’s gone. And that is a real tragedy. Game of Thrones has too few characters that are both likable and admirable. Robb Stark was one of them, and he will be missed.