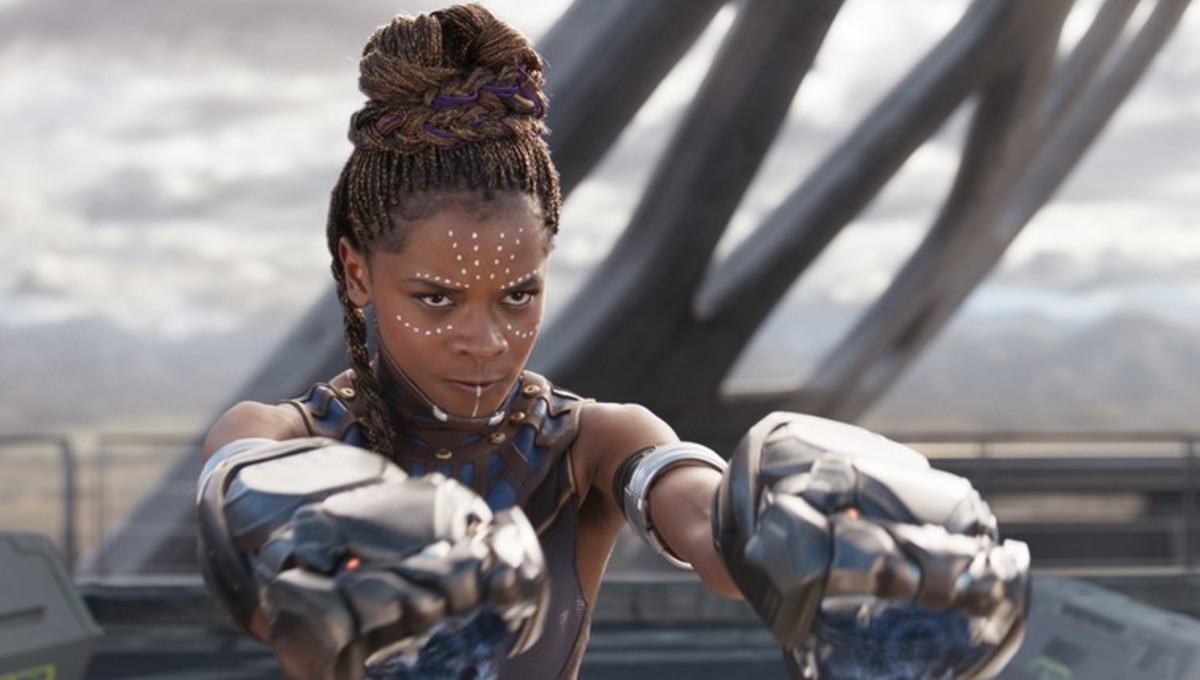 Welcome to Bae Watch Wednesday, where I tell you all about the fictional characters you ought to be crushing on. I finally got the chance to see Black Panther, and I’m in awe. So stay tuned for several Bae Watch posts about the awesome people of Wakanda. Up this time: the brilliant and fun Princess Shuri!

Who is Princess Shuri?

Princess Shuri is, shockingly enough, the princess of Wakanda. She appears in the Black Panther movie. Her father, T’Chaka, was the king. Upon his death, her brother T’Challa became king. However, to define Shuri solely as a princess does her a massive disservice. There’s so much more to her than that title implies.

We first meet Shuri when T’Challa returns to Wakanda after “rescuing” Nakia from a covert mission. It’s our first introduction to Wakanda. Although we met T’Challa in Captain America: Civil War (as well as at least one Dora Milaje), we have yet to experience the magic of Wakanda. It does not disappoint.

The people of Wakanda don’t disappoint, either. T’Challa, soon to be crowned King of Wakanda, Black Panther, warrior, hero, etc, etc, break-out star of Civil War, is immediately roasted upon returning to the palace. His guard Okoye and Shuri trade barbs about T’Challa’s response to seeing Nakia again… and I was hooked.

Shuri is the resident genius of Wakanda — and the smartest person in the world. She is the technical mind behind the Black Panther suit. While T’Challa may gain powers from the heart-shaped herb, there’s no denying that a lot of what he can do comes down to his sister’s inventions.

However, Shuri is definitely also a warrior of Wakanda — and deserving of the title Princess Shuri, as we see in the scene where T’Challa fights for the throne of Wakanda. In traditional Wakandan garb and face paint, she’s a fierce sight to behold. But don’t worry, she’s still Shuri — she makes a joke about hurrying things along to remind us who she really is.

Shuri’s laboratory is one of the coolest things in Black Panther. It’s where she designs miraculous things that she brings to life with the help of Wakanda’s stash of vibranium. Her lab overlooks the vibranium mines, giving a reminder of where Wakanda draws their strength. At the same time, it’s decorated in brightly colored African prints, to remind us of where it is.

In the lab, we see Shuri show off a bit. She has come up with new design for the Panther suit that allows for more transportability and ease of use. While demonstrating it, however, she can’t pass up the chance to tease her older brother. When T’Challa reels back from a blow, she films it. True sibling relationships, here.

Later, T’Challa goes on a mission to track an enemy of Wakanda. Shuri does not go with him, but she is still an integral part of the mission. She is able to help coordinate things from her lab. At one point, T’Challa uses one of Shuri’s inventions to give her remote control of the car; she has a blast “driving” through the streets of South Korea.

Where Shuri really comes into her own, however, is in her medical know-how. We know from Civil War that Bucky Barnes is in Wakanda while they try to find a way to overwrite his programming. Shuri is the person in charge of his rehabilitation.

She later gets the chance to work more on these skills when Everett Ross, a CIA Agent, is injured saving Nakia’s life. They bring him back to Wakanda, where Shuri uses technology to save Ross’ spine. He is agog at what she accomplishes, but to Shuri, it’s just another chance to use her mind to do good: “another broken white boy” to save.

Later in the film, T’Challa is challenged for the throne by his previously unknown cousin, Erik “Killmonger” Stevens. Shuri is there to support her brother, and just as shocked as everyone else when Killmonger wins — tossing T’Challa over a cliff. Shuri watches her brother die. Who is she now, if not Princess Shuri?

Luckily, Nakia is fast thinking and takes action to save Shuri and her mother, fearing (probably correctly) that Killmonger would have them executed to solidify his reign. The three women, along with Ross, sneak out of the palace and seek aid from M’Baku, an aggressive sort-of ally. They discover that T’Challa is alive, and formulate a plan to save Wakanda.

They have learned that Killmonger intends to send Wakandan weaponry to black people around the globe to rise up against their oppressors. T’Challa goes to challenge Killmonger while the women (and Ross) stop the weapons shipments. Shuri and Ross work in tandem, with Ross utilizing Shuri’s RC technology to fly a warplane and stop the shipments.

In the meantime, Shuri and Nakia enter the battlefield, showcasing some seriously cool weapons. The main show, though, is really T’Challa. He lures Killmonger into the mines, where he uses Shuri’s inventions to take down his cousin, once and for all.

At the end of the film, T’Challa takes Shuri to America. They visit the building where Killmonger grew up. T’Challa has decided to turn the land into a Wakandan Outreach Center. He places Shuri in charge of sharing Wakandan technology and scientific progress, which thrills her.

Why is Princess Shuri Bae?

Look, Letitia Wright is adorable. She is too damn cute. Her smile is like sunshine and I loved her hair in the top knots. Shuri might just be the cutest character I’ve seen in a long time.

First up: teenager. Snarky teenager, at that. Shuri is only sixteen in Black Panther, and it shows. She’s ecstatic when one of T’Challa’s missions means she gets to drive a car. And she’s not just any teenager; she’s a Gen Z teenager. Shuri is a child of the internet. She makes a terrible pun when showing off one of her inventions, and quotes a meme at T’Challa.

And Shuri is a sister. Her relationship with T’Challa made the movie for me. As a younger sister myself, I love seeing it accurately represented on film: how you’ll poke at and tease each other, but when it comes down to it you have each others’ backs, no questions. Shuri is the person I want to be: snarky, genius, warrior, sister.

But if I had to boil Shuri down to one thing, give her one label, it would be: heart. Shuri is the heart of the film. That’s not just me talking, by the way. Letitia Wright and director Ryan Coogler set out to make Shuri the fun and joy of the movie. She adds life to what could be a dark and brooding story.

Think of it. During the tense scene when T’Challa waits to see if anyone will challenge him for the throne, Shuri cracks a joke about her ceremonial outfit being uncomfortable to help T’Challa relax a little — and maybe make him sweat just a tad. It’s moments like these that prove that Shuri is there to make us smile.

In the tense Korea arc, Shuri isn’t even there, but she still brings the laughter. She’s still in her lab in Wakanda, but she’s able to help T’Challa achieve his goals. At the same time, though, she’s genuinely enjoying herself. It’s not every day a 16-year-old gets to go on a high-speed chase through busy streets, after all.

And Shuri had some of the best lines. The joke about Ross being “another broken white boy” for her to fix was great. It reminded us of Barnes being in Wakanda, yes, but also diminished the seriousness of Ross’ injury. When Shuri calls Ross “colonizer,” despite knowing his name, it showed how the new generation is not afraid to call out problematic history — or joke about it.

In a film that focuses so much on the past — Killmonger’s childhood, T’Chaka’s mistakes — Shuri reminds us of the future. And if Shuri is the future, then the future is bright. She’s making great strides in technology and science. She reminds T’Challa that he is human. She enjoys life. Isn’t that what a good character should do — remind us of how great it is to be alive?

I loved so many of the characters in Black Panther. But Shuri is possibly my favorite. She reminds me of the Gen Z teenagers I teach every day — a little bit wacky, but destined to do great things. Shuri is going to change the world.

I can’t wait to see what comes next for Shuri. She’s confirmed for Infinity War — pictures from the set show her talking to Bruce Banner, which I cannot wait to see — so she’ll be back soon. Now that Disney has confirmed a Black Panther sequel, we’ll get even more Princess Shuri to brighten our screens. Maybe we’ll even be able to see her become the Black Panther?

For now, I’ll sit tight and wait for Infinity War. The film is sure to be one of the darkest MCU offerings yet, so I’m counting on Shuri to bring light and joy to the film.