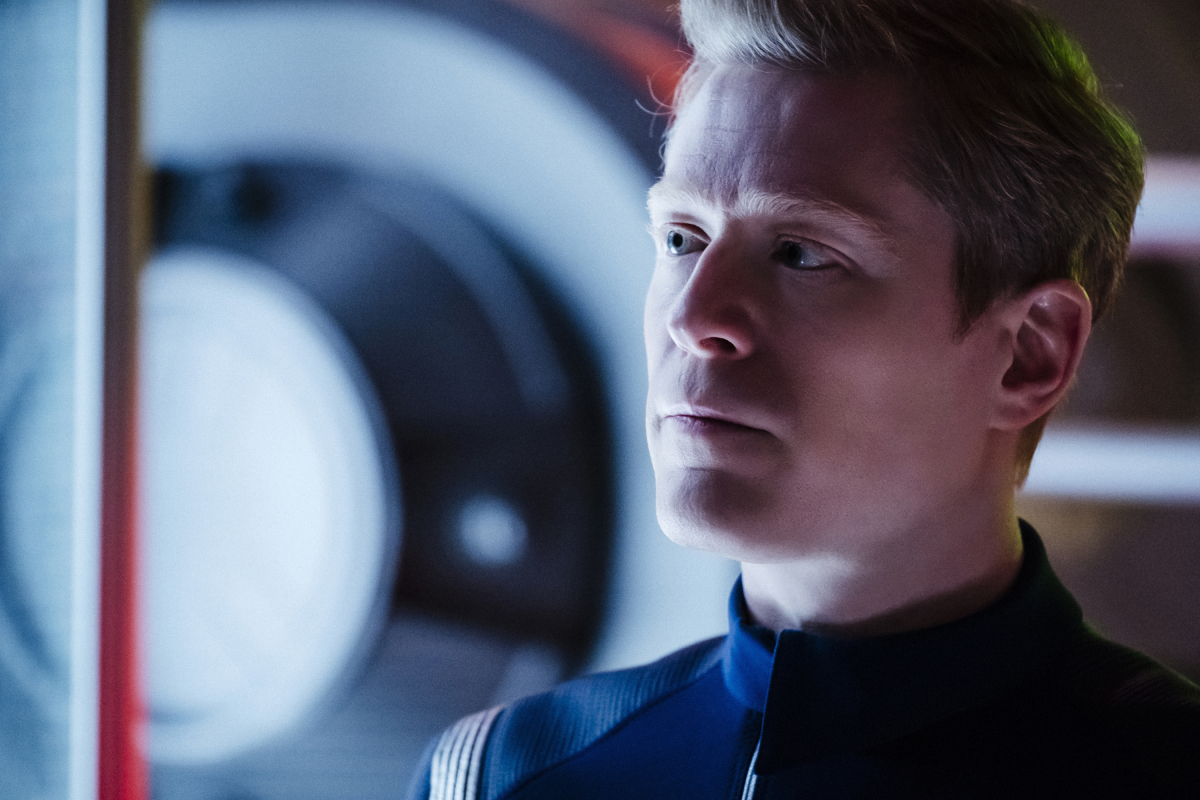 Welcome to Bae Watch Wednesday, where I tell you all about the fictional characters you ought to be crushing on. For June, I want to share some love for queer content out there, so this week’s bae is Paul Stamets!

Who Is Paul Stamets?

Paul Stamets is one of the primary characters in Star Trek: Discovery. He is a lieutenant on the science vessel Discovery. The Discovery is unique among Starfleet’s ships, and most of that comes down to Stamets. Stamets is an astro-mycologist, meaning he studies fungi and other organisms in space. Working with a colleague, Stamets invented a new propulsion system: spore drive. Unlike warp drive, which is standard on Starfleet vessels, spore drive allows a ship to instantaneously transport anywhere in the galaxy.

Unfortunately for Stamets and for the Discovery, the spore drive doesn’t work, at least not as well as it should. The Federation is embroiled in a war with the Klingons, and Discovery’s captain, Gabriel Lorca, is pushing for the spore drive to end the war. But Stamets has only gotten the ship to be able to fly kilometers, not lightyears. Enter Michael Burnham, mutineer, and the protagonist of Discovery. Despite being court-martialed and dismissed from Starfleet, Lorca assigns Michael to work with Stamets, who’s not exactly thrilled.

When the Discovery’s sister ship, the Glenn, is destroyed in a test of their spore drive, tensions rise. The Glenn had been working under the supervision of Stamets’ colleague Strall, who’d pushed the drive too far. A trip to the destroyed Glenn to figure out what went wrong leads to an unexpected find: an alien tardigrade who is drawn to the mycelial spores used in the drive. Stamets and Burnham discovered that the tardigrade could help the ship reach its full potential, but that doing so is torture to the creature. The bloodthirsty Lorca orders them to do so anyway, but Stamets and Burnham rebel. Burnham releases the tardigrade, and Stamets injects himself with tardigrade DNA to be able to fly the ship on his own.

Stamets’ decision is risky and dangerous, and puts him in hot water with his husband, medical officer Hugh Culber, who is understandably upset at this unsupervised and ill-thought out procedure. However, with the new tardigrade DNA, Stamets is able to fly Discovery at her full potential. Lorca is predictably thrilled and unconcerned with Stamets’ well-being, and for a time the Discovery does her job, flying around and battling the Klingons for Starfleet. However, when Lorca orders Stamets to complete over 100 jumps in little time, things go horribly wrong.

The Discovery ends up flying into a parallel dimension, one in which Earth has formed a ruthless Terran Empire that subjugates all alien life. In order to make it home, the crew has to blend in and pretend to be Terran, which sits heavily on them. They can’t just fly home with the spore drive because the final jumps put Stamets into a state of psychosis as he becomes embroiled in the mycelial network, the web of spores that allows Discovery to travel. Things go from bad to worse when a security officer is revealed to be a Klingon sleeper agent when he kills Hugh, who had been tending to Stamets in the medbay.

While trapped in the mycelial network, Stamets is confronted with his Terran counterpart, who had also pushed things too far in his research. While the crew fights against a Terran coup on the outside, Stamets is inside fighting to return the ship back to their own universe. He is ultimately successful and finds his way out of the network when a vision of Hugh helps guide him home. For the remainder of the Klingon war, Stamets does his job, but he’s reeling from the loss of Hugh and the journey into the network.

After the war, Discovery gets back to her mission of scientific exploration. They got a new captain, as Lorca had been secretly Terran. Captain Pike is a good man, honorable and understanding. But Stamets is still running low after everything that’s happened. He even mentions to Tilly, an engineering prodigy who frequently works with him, that he’s thinking of leaving Starfleet. However, when Tilly is kidnapped by May, an evolved spore creature and brought into the mycelial network, Stamets and Burnham had to enter the network to rescue her before it’s too late.

This involves putting the Discovery in a half-jump, a risky maneuver. In the network, they find Tilly, but that’s not all they find. May asks Stamets to destroy a mysterious creature that is harming the network. When they find the creature, they’re shocked to realize it’s Hugh, who was reconstituted in the network after death. Hugh is badly damaged, but Stamets is thrilled to have his husband back. They work to bring Hugh out, and though it almost doesn’t work, in the end he returns home.

However, things aren’t great. Hugh is shaken by his experiences and can’t go back to the way things were. Stamets, overjoyed to have his husband back, tries to make things right, but Hugh leaves, looking for space. In the meantime, Stamets has to help solve the mystery of a time-travelling being and the murderous AI, Control. When they realize the only way to stop Control is to send Discovery to the future – a one-way trip – Stamets, among other crew, volunteer to stay with Michael in the future. In the battle against Control, Stamets is injured. Luckily, Hugh has a last minute change of heart and stays with Stamets on Discovery, as they travel to the future together.

Why Is Paul Stamets Bae?

Paul Stamets is the kind of character who catches your eye right away, because of both the way he looks and the way he acts. Anthony Rapp does an amazing job bringing Stamets to life, and his pale skin and mesmerizing blue eyes give Stamets an otherworldly air, which is only emphasized when Stamets goes into a psychosis, mentally trapped in the mycelial network.

It’s not just Rapp’s ethereal looks that give Stamets an extra oomph. Rapp has a physicality that works well for the sometimes manic Stamets, an energy that brings to mind a vaguely mad scientist. Plus, it’s thrilling to not only have an openly gay major character on a show like Discovery, but to have that character played by a queer actor? This is the representation we deserve.

We first met Paul Stamets in “Context Is For Kings,” the third episode of Star Trek: Discovery. Stamets is off-putting and harsh to Burnham, given her reputation as a mutineer who caused the war with the Klingons. Stamets is upset that she’s put to work in his engineering lab, and tries to keep the spore drive project secret from her. The mystery surrounding Stamets and his work bothers Michael, and she thinks he is working on a biological weapon for the war effort.

But we see a different side of Stamets when he is doing what he loves. As he tells Michael in “Context Is For Kings,” he became a scientist because of his awe at the miracle of life. He’s an astro-mycologist – he loves studying the miniscule creatures that make up all of reality. The idea for the spore drive came out of his work with Strall and their mutual desire to explore the very basis of the galaxy that surrounds them. Stamets was particularly pissed off at Michael because the Klingon war led Starfleet to co-opt his work and put it towards the war effort, rather than letting it be about science.

Because that’s what Stamets cares about – the science. Stamets loves science. He loved his mushrooms and the magic of the spore drive and the tardigrade they rescued from Lorca. He loves coming up with new solutions to unique situations. Stamets is in his element on Discovery, an experimental science vessel that promotes, well, discovery. You can really see the way Stamets loves science in his interactions with Tilly. Tilly is an overenthusiastic, sometimes annoying person. If Stamets was really the brusque taskmaster he first appeared to be, he’d shut her down. Instead, he nourishes her love of discovery and helps her grow.

The protégé relationship Stamets has with Tilly reveals another truth about him: Paul Stamets is a secret softie. It’s a fun reveal that comes slowly. At first, Stamets really does appear to be a caricature of a scientist, harsh, untrusting, and wholly dedicated to his work. But over time, he is softened by the relationships he develops with his crew. At the start of Discovery, the ship is new, and Stamets is new to working with Starfleet, so he hasn’t really built any relationships yet – except, of course, with Hugh.

Stamets’ relationship with Hugh is one of the most bittersweet aspects of Discovery. It’s thrilling to have a canonically gay couple on a show as big as Star Trek, but even beyond the long overdue representation, their relationship is just enjoyable. Their marriage is formed out of banter and bickering and strong wills, often in opposition, but it’s built on a bedrock of love. The back and forth between Stamets and Hugh is delightful – until Hugh dies. This led to Discovery facing accusations of queerbaiting and “bury your gays,” but they promised we hadn’t seen the end of Hugh.

In the meantime, Stamets formed deep relationships with the rest of the crew, particularly Tilly. Burnham is a deck officer, so although she’s a science officer, she doesn’t spend much time in engineering. Tilly, however, is often paired with Stamets. Although he’s impatient, he finds it within himself to mentor and shelter Tilly as she finds her footing. She’s the one that helps Stamets the most when he’s grieving. Stamets’ relationship with other crew, including Michael, is also developed well as the crew bonds over the course of their adventures, and by the finale, Stamets is a far cry from the rude scientist we met in “Context Is For Kings.”

It takes time to see what a great character Paul Stamets is. It would be easy to dismiss him from the start, taking him on appearance as a brilliant but rude man who doesn’t play well with others. But that’s not who he is. We see hints early on – he gives Michael a phaser on their away mission, trusting her when no one else is – but it still takes time for the real Stamets to emerge. He’s understandably angry that his research is being co-opted for a war effort, and resistant to the warmonger Lorca (Stamets’ own words).

But inside, Paul Stamets is just a big ol’ softie who loves science. He loves to think and discover, and he blends in well with the other crew on Discovery who are all on the same mission of scientific exploration. Stamets bickers with his husband, but he would do anything for Hugh. Watching him mourn is one of the more painful aspects of the show, but thankfully we have a happy (in progress) resolution (that will hopefully play out more in season three). Even aside from Hugh, Stamets built a family on Discovery. He even stays with the crew til the end, even though it means leaving their lives behind forever.

I wouldn’t say that Stamets is my favorite character on Discovery (I love Saru). But Stamets really grows on you. Getting to know this brilliant, vaguely mad scientist is one of the best parts of Discovery. Paul Stamets is a microcosm of the real message of Star Trek: that people are innately people. And those people are going to change the world as we know it. Paul Stamets promises a better future, where science can be explored and families can be found in the far-flung reaches of space.