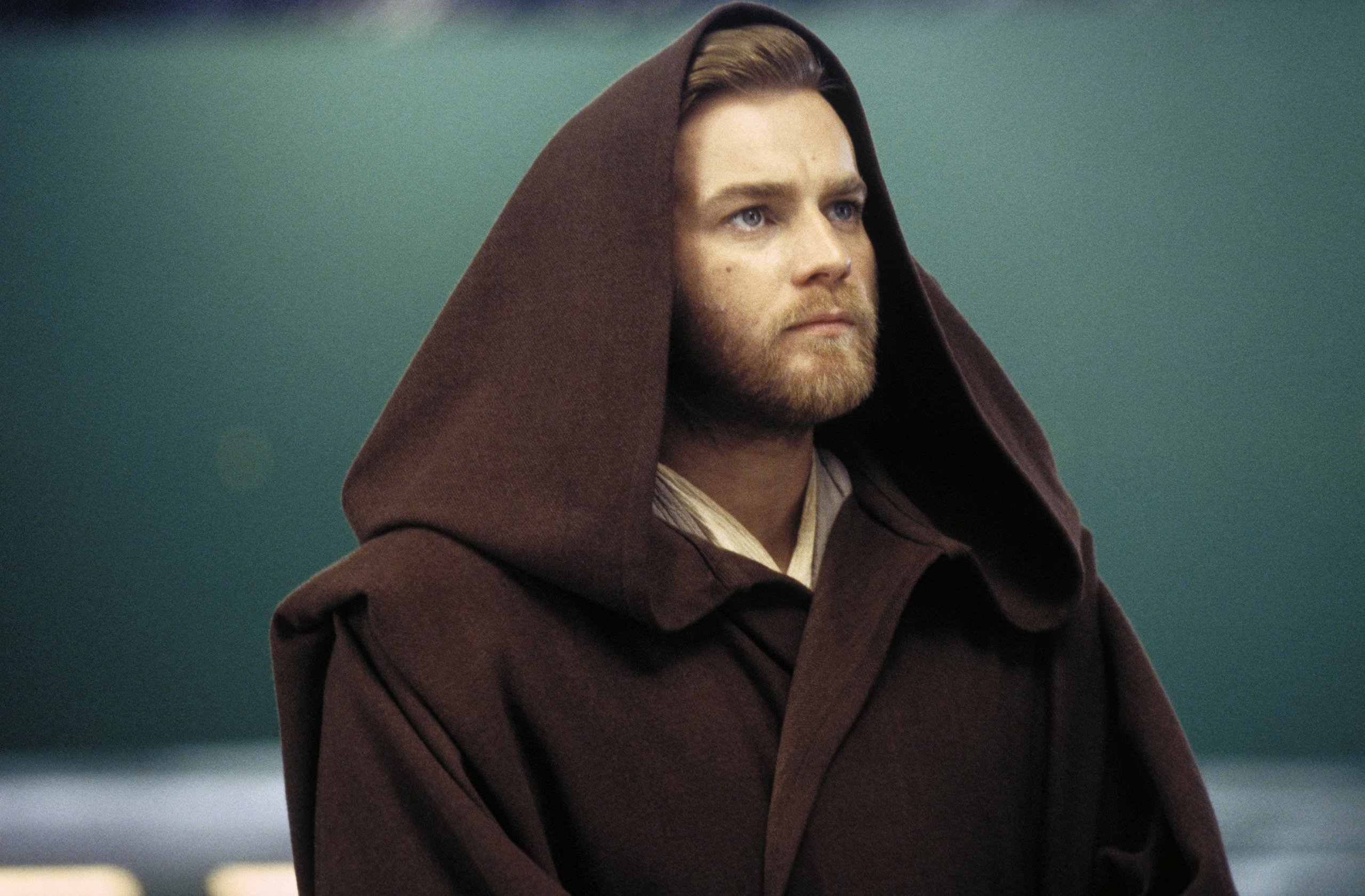 Welcome to Bae Watch Wednesday, where I tell you all about the fictional characters you ought to be crushing on. In honor of The Last Jedi coming out this month, all my December baes will honor my original fandom, Star Wars. This week’s bae: Obi-Wan Kenobi.

Who is Obi-Wan Kenobi?

Obi-Wan Kenobi is first introduced in A New Hope as an old man. Owen Lars calls him “crazy” and a “wizard,” but we later find out that Obi-Wan is actually a Jedi. He functions as a mentor to protagonist Luke Skywalker, taking him on a Hero’s Journey.

Obi-Wan also provides a link to the past for Luke. Luke is an orphan being raised by his aunt and uncle. He doesn’t know much about his family, but Obi-Wan is able to provide some info. Luke’s father, Anakin, was once also a Jedi. He and Obi-Wan were good friends — we later learned that Obi-Wan taught Anakin. Thus, Obi-Wan provides Luke a path to his future and a link to his past.

Unfortunately, Obi-Wan dies in A New Hope. He’s not gone, however. He reappears in both Empire Strikes Back and Return of the Jedi as a Force ghost, continuing to give Luke advice. Obi-Wan’s real story, however, begins in the prequel trilogy. The prequels focused on the story of Anakin Skywalker, and therefore feature a lot of young (and considerably more attractive) Obi-Wan Kenobi.

When we first meet Obi-Wan in The Phantom Menace, he is a brash, young padawan learner. His master, Qui-Gon Jinn, has been assigned to diplomatic duties. Unfortunately, his mediation isn’t even given a chance before war breaks out. Obi-Wan and Qui-Gon must escape the planet Naboo, and take the queen with them to the capital to seek help.

On the way, they stop off at Tatooine, where Qui-Gon meets a young slave with enormous Jedi potential. He goes against Jedi ways and recruits the kid, Anakin. Obi-Wan is slightly disgruntled that Qui-Gon is always breaking the rules, but backs up his master. Later, when Qui-Gon says Obi-Wan is ready to become a full Jedi, he is honored.

Qui-Gon unfortunately dies, leaving Obi-Wan masterless and Anakin abandoned. However, the two quickly link together, with Obi-Wan following in his master’s footsteps and disregarding the Council. At this point, Obi-Wan is still very young. He’s not terribly mature and has a quick temper and a brash personality. In hindsight, he probably wasn’t ready for a padawan of his own.

He and Anakin clicked. Ten years pass before we see them again, at which time the two are like father and son. In Attack of the Clones, Anakin tells Obi-Wan he’s the closest thing Anakin has to a father. Obi-Wan treats Anakin like a kid, sometimes, which leads Anakin to feel belittled and angry. In the end, though, there is a deep bond between master and padawan, leading Anakin to disregard orders to save Obi-Wan’s life.

Soon, the galaxy is embroiled in the Clone Wars, and Obi-Wan is made a General in the Republic Army, as is Anakin. The two make a name for themselves as talented problem-solvers, belying their youth. At the same time, Anakin is being lured to the Dark Side by Chancellor Palpatine. This is fueled by Anakin’s rule-breaking secret marriage to Padme Amidala.

By this time, Obi-Wan is a full Jedi Master and serves on the Council. Anakin, however, is not, and he resents this. He is appointed to the Council on the recommendation of Palpatine, but when he is not given the rank “Master,” he feels snubbed. Obi-Wan wants to help, but Anakin is angry and closed off.

Obi-Wan goes off on an important mission, to defeat General Grevious. He manages to do so but is caught unawares when Palpatine starts Order 66 — the murder of all Jedi. He survives the assassination attempt and returns to Coruscant where he meets up with another surviving Jedi, Yoda.

Obi-Wan is aghast to learn that Anakin has turned to the Dark Side and slaughtered the Jedi younglings. He goes to confront Anakin, and they have a fierce duel. It seems to be a stalemate until Obi-Wan gains a significant advantage — the high ground. He defeats Anakin, cutting off his limbs and leaving him to burn to death in hot lava.

Then, Obi-Wan tries to save Padme, who is dying after giving birth to Anakin’s twin children. Padme dies, and Obi-Wan agrees to help protect the children by splitting them up. He takes Luke to Tatooine, to live with Anakin’s family. Obi-Wan spends the majority of the rest of his life watching over Luke, and the rest is history.

Why is Obi-Wan Kenobi Bae?

Obi-Wan Kenobi is, arguably, one of the most attractive men in Star Wars. At least, young Obi-Wan is. No offense to Sir Alec Guinness, but he’s not exactly babe material. Ewan McGregor, on the other hand? He’s a bit quirky looking, to be sure, but he makes it work.

Looks aside, however, Obi-Wan Kenobi is a great character. He’s got a lot going for him. He’s an incredibly powerful Jedi. Obi-Wan makes it to the Jedi Council at an extremely young age, showing that the Council had a lot of faith in him.

Obi-Wan’s power is later reiterated when he defeats the newly christened Darth Vader on Mustafar. At this point, Anakin was full of Dark Side power. He was younger, more aggressive, and more powerful than Obi-Wan. Obi-Wan was able to defeat his former Padawan in a duel. Although Vader later defeats and kills Obi-Wan, this is only because Obi-Wan allowed him to.

His power was further demonstrated by his ability to manifest so prominently as a Force ghost. Even after death, Obi-Wan was so strong in the Force that he could continue to mentor Luke for many years (almost ten years past his death). Although Obi-Wan was not the only Jedi to master this ability, he is the one shown using it most frequently.

Aside from Force powers, Obi-Wan was a respected military leader. His actions during the Clone Wars allowed the Republic to keep the Separatists at bay. His clone troopers not only respected him, they liked him. He and Anakin went on many missions that saved countless lives. It’s no wonder that Bail Organa remembers him as a powerful ally. Leia’s “only hope,” indeed.

Is Sarcasm a Force Power?

Moving past his abilities, Obi-Wan Kenobi has the best personality. When we first meet him, he’s brash and a little reckless. At this point in time, he’s just a teenager. However, he already displays the characteristic wit that marks older Obi-Wan.

Obi-Wan is the most sarcastic being in the galaxy. Considering that that galaxy also contains Han Solo, that’s saying something. He’s always ready with some snappy quip. His gentle mockery is almost as devastating a weapon as his lightsaber and makes him much more entertaining.

It’s no wonder that Obi-Wan is so well liked. He makes friends with any and all people. His discovery of Kamino is only possible because he befriended a somewhat sketchy diner owner, Dex. Obi-Wan is assigned to protect Padme because they have a prior relationship, and indeed Padme seems happy to see him again.

Likewise, Obi-Wan does a pretty good job raising and training Anakin. It may have ended badly, but while it lasted, it was good. Anakin was probably always a lost cause. Taken from his family, too old to not know what he was missing, it was natural that he resent the Jedi. But he stayed as long as he did because of Obi-Wan. Obi-Wan became the father he never had, the brother he needed, and the example he could follow.

Obi-Wan Kenobi is great. He doesn’t make the best first impression, as the old, somewhat weak, manipulative Ben Kenobi we meet in A New Hope. But in the prequels? Young Obi-Wan is great. He’s sarcastic, caring, powerful, and overall endearing.

Obi-Wan is one of the few redeeming factors of the prequel trilogy. One of the main problems with the prequels was their need to connect everything to the original trilogy. But this was a case of taking a (somewhat) minor character and making him even better by giving him a rich backstory. Casting Ewan McGregor was great work, too.

Lucasfilm has announced a new Obi-Wan Kenobi stand-alone movie. As they expand the Star Wars universe, their stand-alone films provide an interesting lens into characters not named Skywalker. I can’t think of a better choice than Obi-Wan. Beloved by fans, he’s sure to remind people that the prequels weren’t all bad.