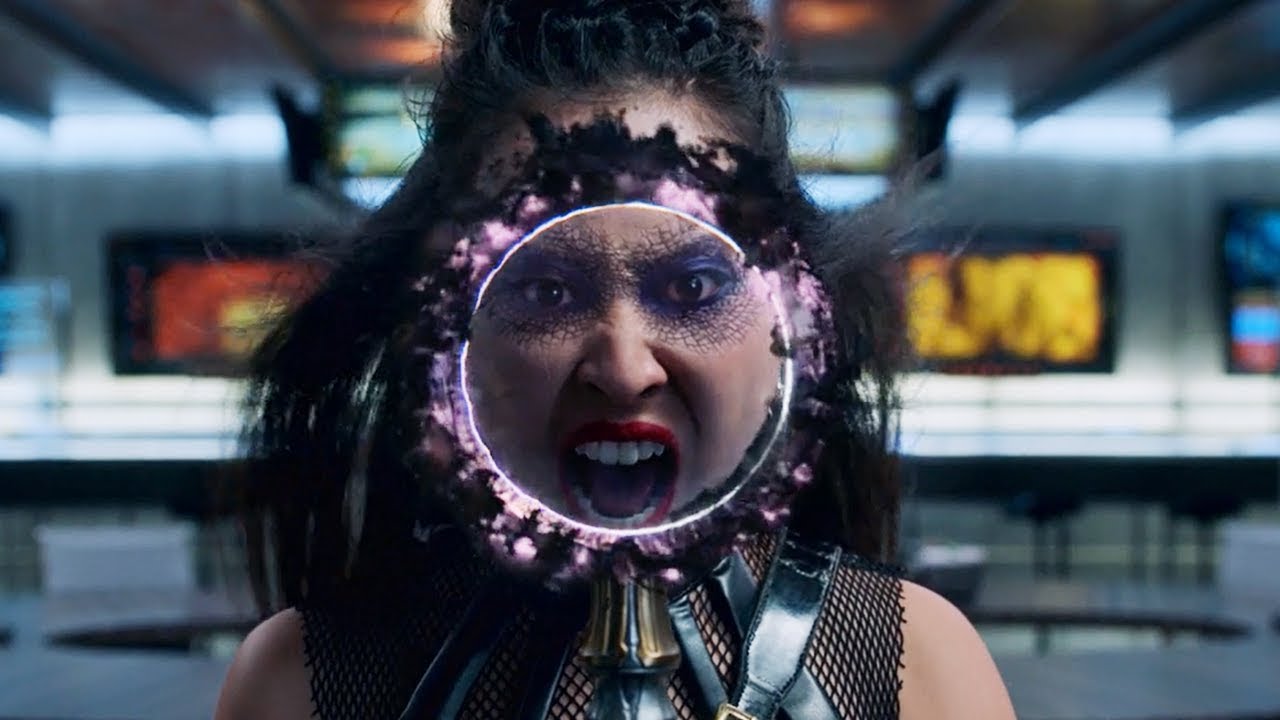 Welcome to Bae Watch Wednesday, where I tell you all about the fictional characters you ought to be crushing on. This week let’s talk about Nico Minoru.

Who Is Nico Minoru?

Nico Minoru is one of the primary protagonists of the Hulu original Marvel’s Runaways. Nico was an average teenage girl until her sister, Amy, was found dead one morning. After Amy’s death, Nico pushes everyone in her life away. She has a strained relationship with her parents, especially her mother Tina, and distances herself from the group of friends she shared with Amy. On the second anniversary of Amy’s death, she goes to a beach and tries to contact Amy through a spell, but fails.

Feeling lost, she goes to her friend Alex’s house. Alex used to be very close with Nico and Amy, but they fell apart. He was trying to get a group of friends together who used to hang out. Although everyone is reluctant, they all show up. But things are too awkward, and popular kid Chase insists he needs alcohol to talk through all their issues. The group goes into Alex’s house to find alcohol, and stumble on something far more sinister: a secret passageway. At the end are their parents, conducting an odd ritual that involves killing someone.

The kids are beyond freaked out to have seen their parents not only kill someone but to do so ritualistically. They decided to investigate and see what was going on. Not everyone was on board immediately, particularly church girl Karolina, who insisted that her mother would never kill anyone. Nico has always been at odds with her mother, so she fully believes there is something sinister going on. As the kids go forth with their lives, they have to balance their new knowledge with daily life. It’s important that they not let on that they know anything, for their safety and the success of their investigation, but it’s definitely not easy after what they’ve seen.

Nico’s investigation looks into her mother’s staff, which she previously assumed was just some heirloom. When she sees her mother use it during the ritual, she realizes there’s something more going on, so she sneaks into Tina’s study to try it out. The staff responded to Nico and she was able to do magical things, including accidentally making it snow when she discovered a paper snowflake Amy made. Panicking at the thought of her mother discovering what she’s doing, Nico calls Alex for help. They managed to clean up the study, but when Tina came home, Nico pretended to kiss Alex as a cover.

Although Nico insists that she was just pretending for their safety, Alex has always been interested in Nico and started pursuing her. It seems like it might be going somewhere, with a mutual kiss taking place, but things go sideways when Nico and Alex break into Tina’s office to find evidence of their parents’ wrongdoing. Alex is able to guess Tina’s password, which makes Nico suspicious. She confronts Alex, and he reveals that Amy asked him for help before her death. She’d been flagged for trying to hack Tina’s company.

Nico realizes that her mother may have had something to do with Amy’s death and that Alex had been withholding information. She pushes him away, growing closer with Karolina, who has discovered that she has superpowers. When the kids decide to confront their parents at a suspicious construction site, Nico and Karolina kiss, thinking it’s their last chance. During the confrontation, Karolina offers to hold the parents off so the kids can escape. They later came to rescue Karolina, who was being held in her mother’s church, and became fugitives when they were accused of murder and hiding in an abandoned mansion Karolina finds.

The kids settle into life as runaways while they contemplate their next step. Their confrontation at the construction site was complicated by the mysterious Jonah, who has powers similar to Karolina. Nico insists that the team practice using their powers so that they can face their parents and Jonah as a team. Although Alex had previously been the team leader, he’s distracted and secretive, leaving Nico to pick up the slack. She pushes the team and tries to learn how to control her staff and its powers.

The kids fight, especially Alex, but Nico keeps them together. She doesn’t realize that she needs to be concerned about Karolina, who has been meeting with Jonah in secret. Jonah is Karolina’s father, and he shows her how to use her powers. They start connecting and Karolina sympathizes with Jonah, learning that he is an alien and the construction site is to dig up his spaceship, which also holds his family – Karolina’s family. Karolina starts to believe they shouldn’t be fighting Jonah, but learns a terrible secret: he killed Amy.

Nico becomes more determined than ever to stop Jonah. They have another showdown at the dig site, only this time the parents are also trying to stop Jonah. With everyone working together, Nico is able to stop him – by killing him with her staff. This causes a rift between her and Karolina. They manage to patch things up, but have no time to really fix things when the parents go on the offensive. Tina uses machinery to stop Nico from using the staff, but Nico unlocks a mysterious – and dark – power to escape. Though she’s afraid of her newfound darkness, Nico makes it back to their hideout, only to learn Karolina has been captured and the team is fractured.

Why Is Nico Minoru Bae?

Listen, Nico Minoru is everything my wannabe emo baby gay teenage self would have died over. She’s the epitome of the eternal struggle – do I want to be with her or do I just want to be her – for sad high school Colleen. Between the goth styling that’s totally in line with her occult powers, the fantastically applied high fashion makeup, and the so over it attitude, Nico Minoru is definitely a high school bae.

I enjoy Runaways, but one of the most obvious things they do is assign stereotypes to the six main teenage characters (I assume it comes from the comics but I’ve never read them, so I don’t know). The show has a definite teen drama feel, and a lot of it comes down to the fact that the main characters are (a) in high school and (b) very obvious high school stereotypes. Alex is the nerd, who drops pop culture references, plays video games and knows how to hack anything. Chase is a popular jock who cares about lacrosse more than anything else. Karolina is the perfect church girl, Gert is the social justice warrior, and Molly is just the kid, essentially.

Then there’s Nico Minoru, the stereotypical goth girl. When we first meet Nico, we see her getting ready for school. Her room is filled with dark imagery, including skulls and other occult symbols. Her outfit is all black and she puts on heavy, stylized makeup. She has an overall air of “fuck you,” but we see her soon clash with her mother over entering Amy’s room. Later in the pilot she ends up crying in the bathroom. She’s not just goth for the sake of it, she has her reasons. It’s a stark contrast to the younger Nico we see in flashbacks who looks like any other kid.

The goth feel works for Nico. It’s not just an aesthetic for her – it’s a way of life. She practices Wicca and has a deep interest in the occult. This works for her when she starts utilizing the power of the staff, which may be technology but definitely feels like a magic wand. She already had the look; now she has kickass powers to back it up.

One of the things Runaways does really well is the amount of excellent representation the show gives. The main cast of the six runaways is fairly diverse for television standards; half the team are nonwhite, and two-thirds are female. At least two characters are canonically queer. One character openly struggles with mental illness, and it’s openly discussed. And the diversity isn’t just a background thing. Molly, who is Latina, has a quinceañera to celebrate turning fifteen, and there’s a thorough discussion and display of her culture.

Nico Minoru gives us a lot of representation. She is Japanese-American, and her family embraces their Japanese heritage. Her parents both speak Japanese, and Nico originally assumed the staff of one was merely a Japanese heirloom from her grandmother. The heritage becomes somewhat problematic when both Nico’s parents are shown to be martial arts experts and they run a massive tech company, but it’s still representation, and specific representation, rather than vaguely Asian-American.

Nico also provides representation as a queer character. While her sexuality is not explicitly defined in the show, she appears to be bisexual. She first shows interest in Alex. While this could be construed as one-sided, Nico does actively choose to kiss him. But Nico’s open interest in and clear relationship with Karolina proves she isn’t straight, either. They have a canonically queer relationship, that isn’t pushed to the side or kept hush-hush; Deanoru is one of the major relationships and driving forces in the show, putting them on equal footing with the relationship between Chase and Gert.

The best part, though, is that Nico is not a token diverse character. She’s not the only character of color, nor is she the only queer character. She is just a kid who happens to be who she is.

In an ensemble show like Runaways, which has not only the six main protagonists in the teenaged runaways, but their parents as major secondary characters in addition to the main villain in Jonah, it can be hard for anyone to stand out. There are a lot of good characters. I love Gert as an open and shameless look at someone dealing with mental illness who tries to do their best. I really relate to Alex as a nerd who just wants to do the right thing. And of course, you gotta love Old Lace.

But Nico Minoru is definitely my favorite character in Runaways. Some of that is wish fulfillment. For sure, teenaged me would have been in awe of Nico. But even aside from the aesthetic appeal, there’s a lot to love about Nico. She has a real depth of character. She has serious family issues, stemming from her sister’s death and her mother’s control, even before she learns about her parents’ murderous tendencies. Nico’s connection to the occult is fascinating, from her mystical powers with the staff of one (sure to provide a new conflict in season three) to her true dedication to Wicca, such as when she gives Molly’s aunt a Wiccan funeral (one of the most beautiful scenes in the whole show).

Nico Minoru is a stand out character. She’s a leader, taking over the team when Alex loses track of what he’s trying to do. She works hard to keep the team – who quickly becomes a family of their own – intact. Nico is incredibly powerful, potentially the most powerful of the runaways, but she wants everyone on the team to be able to hold their own. And she brings a real heart to everything she does. She just wants everything to be better.