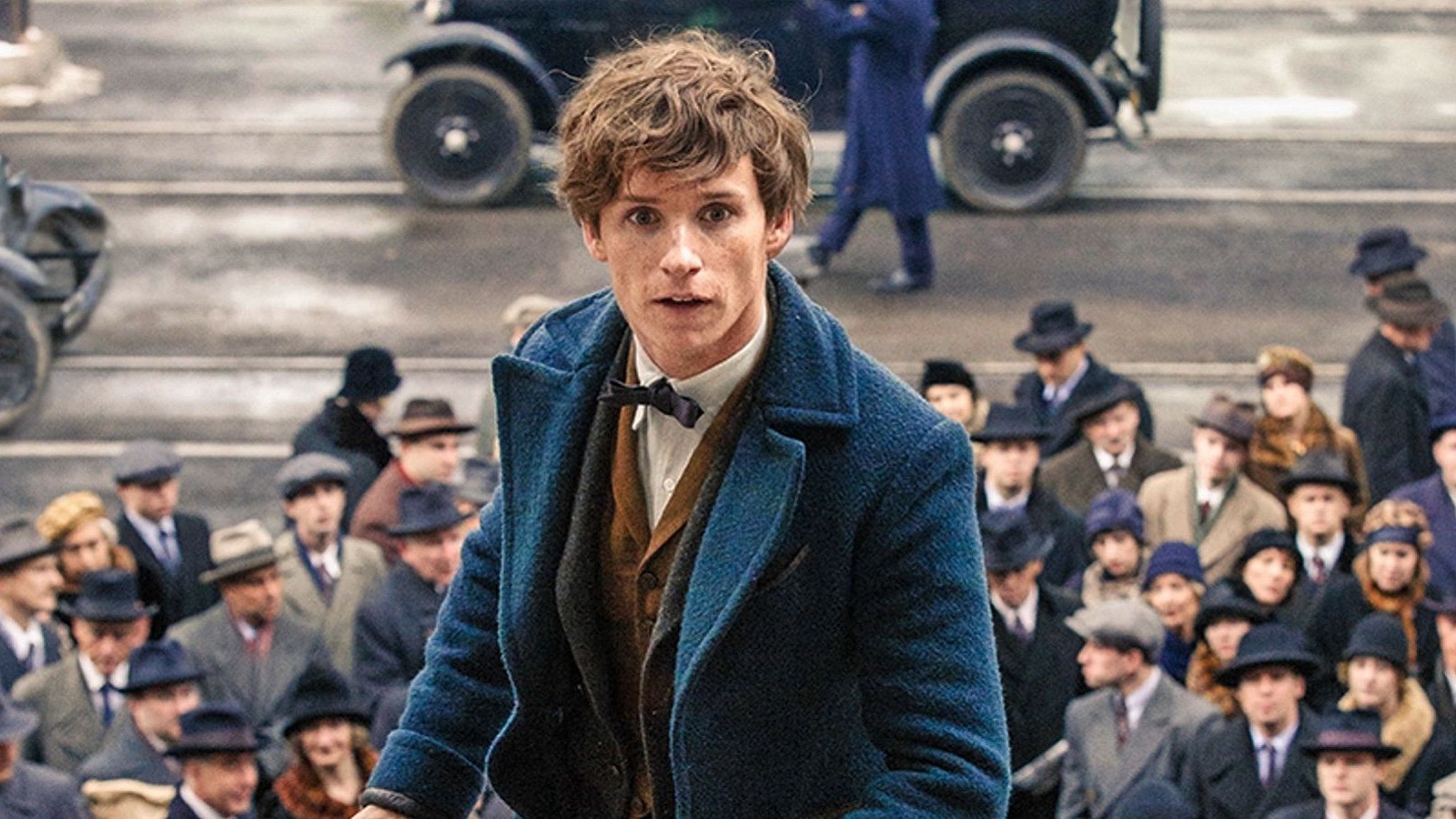 Welcome to Bae Watch Wednesday, where I tell you all about the fictional characters you ought to be crushing on. This week, I’m here to celebrate everyone’s favorite Hufflepuff, Newt Scamander.

Who is Newt Scamander?

When the Harry Potter series ended, fans were desperate for more and Rowling gave in. She partnered with Warner Bros to give us a Fantastic Beasts movie, which has turned into a five-movie franchise. The first movie was released roughly one year ago, and while we have a-ways to wait for the next one, I for one am eagerly awaiting the next movie.

Although the story exists in the same world as Harry Potter — a world where magic exists — it is an entirely different beast (sorry not sorry). Fantastic Beasts takes place in New York City in the 1920s, as opposed to Harry Potter‘s 1990s London. The new story focuses on the American wizarding culture and the rise of bad guy Gellert Grindelwald. We learn in Harry Potter that Grindelwald was the last great dark wizard before Tom Riddle. His rise mirrors the muggle Nazi regime, and he was defeated in the 1940s by Albus Dumbledore.

As a magizoologist, Newt studies magical creatures. He is fascinated by the myriad wonders of the magical natural world. In the movie, it comes across that Newt prefers his creatures to other human beings. He forms deep bonds with his beasts, which is tricky. At this point, magical creatures are outlawed in NYC, and he gets into some trouble with the law when he brings a case full of them with him.

Newt is attempting to return his thunderbird Frank to Arizona, which is his whole reason for coming to America. However, he runs into some difficulties in NYC when he accidentally switches cases with an unsuspecting Muggle. Newt is apprehended by MACUSA law enforcement officer Tina Goldstein.

Newt and Tina then go on an unexpected adventure trying to get his case back. They discover that his case was opened and his creatures are loose. Thus begins a great story of Newt and Tina, along with Muggle Jacob and Tina’s sister Queenie, searching the city for Newt’s lost creatures.

…And Where to Find Them

Along the way, Newt grapples with cultural differences and dark forces at work. Our heroes accidentally reveal that Tina’s boss Percival Graves was actually Grindelwald in disguise and that he was attempting to use an obscurius, a tortured magical child, to raise all hell. They can defeat him, but not before the obscurius, a young man named Credence, seemingly dies.

Newt has his case, and all his creatures returned to him. He is thanked for his assistance in defeating Grindelwald and helping MACUSA cover it up. Newt then prepares to return to England. His notes on his creatures are being turned into a book, Fantastic Beasts and Where to Find Them. He shares a heartfelt goodbye with Tina before he leaves. Despite their rocky beginnings, over the course of the film, they managed to develop a connection.

We don’t know exactly what will happen in the next Fantastic Beasts movie. We only have vague hints. We know that Grindelwald will be back and that Dumbledore will be making an appearance. Cast listings have Ezra Miller returning as Credence, but it’s unclear if he will appear in flashbacks or if the character is actually returning. With a whole year left to wait, all we can do is speculate and clamor for trailers.

Why is Newt Scamander Bae?

Newt Scamander is an adorable, precious cinnamon roll that must be protected at all costs. This bumbling, nervous, delightful man is everything one could want in a bae. And, to top it all off, he’s pretty easy on the eyes.

Newt is a through-and-through Hufflepuff. He exemplifies the house traits of kindness, loyalty, and hard work. This is most clearly seen in his work with his animals. Within his magical suitcase, Newt has created an entire zoo for his creatures, complete with perfect habitats. He treats his creatures as if they were his children. He takes care of them, knows them all individually, and genuinely cares for them.

But Newt is also a clear Hufflepuff in his dealings with other people. It’s clear in the film that Newt isn’t the biggest people-person. We find out that he was expelled from Hogwarts, he seems to have issues speaking to people, and doesn’t seem to care too much about rules if they don’t serve a good purpose. But he has the capacity for extraordinary kindness, as we see in his dealing with Credence.

Whereas Graves/Grindelwald is seeking to use Credence, Newt wants only to help him. Newt previously dealt with an obscurius in Africa and was unable to save the young girl from dying. He wants desperately to save Credence. And his tactics seem to work. Credence responds to Newt’s calm caring much the same as Newt’s more wild creatures do. He is a very soothing man.

It is unfortunate that Newt is interrupted and Credence attacked. If not for this interruption, I truly believe he would have been able to save Credence. And Newt doesn’t do any of this for glory. He simply does these things because it’s the right thing to do. Newt listened hard when the sorting hat described Hufflepuffs as “just and loyal.”

Newt Scamander is also the most adorkable man on the face of the planet. This man is, clearly, a huge nerd. In the beginning, he makes a terrible Quidditch pun that nobody gets, because obviously, he’s speaking to Muggles.

At the same time, this little moment is incredibly endearing. When a Muggle fanatic asks if Newt is a “seeker after truth,” Newt cheekily replies that he is more of a chaser. While I have a hard time picturing Newt playing Quidditch at all, I loved this tiny joke.

Newt’s humor does come up at times, especially in his dealings with Pickett, the bowtruckle. Pickett has become inordinately attached to Newt. Newt, for his part, is both frustrated and amused at this tiny creature with a huge attitude that has chosen him. And Newt’s interactions with the niffler are beyond adorable. Despite the niffler’s obvious infractions, Newt still loves and cares for this infuriating creature.

There are plenty of moments in Fantastic Beasts that are pure adorable fluff. Very early in the film, as Newt’s ship approaches NYC, he is sitting on the deck. He speaks quietly to his creatures, reassuring them that they are almost there. He then puts his face on his case with an adorable peaceful look on his face. This is the moment that I wanted to protect Newt Scamander from all darkness.

Newt Scamander is an ideal man. He’s not perfect, by any means. He stumbles over his words, has difficulty making eye contact, and doesn’t always have the best judgment. But Newt is caring, compassionate, and loyal. He works hard doing what he loves.

Newt is a positive representation of a Hufflepuff in a franchise where Hufflepuffs get disappointingly little screen time. This is a man who embodies Hufflepuff ideals. Newt may have been kicked out of Hogwarts, but that doesn’t make him any less of a Hufflepuff. Since he was expelled for helping a friend, it makes him even more of a Hufflepuff. His loyalty to his friends outweighs his own needs.

Newt is also adorable. His relationship with his creatures is incredibly affecting. He considers himself their “mummy” and takes good care of them because no one else will. Yet he also forms deep connections with the human characters he encounters in Fantastic Beasts. His relationship with the Muggle Jacob is touching, and all the more heartbreaking when Jacob is obliviated at the end of the movie.

Newt has so much potential. I can’t wait to see what the next four movies do with his character, though I suspect it will never be enough to sate my need for more Newt Scamander.