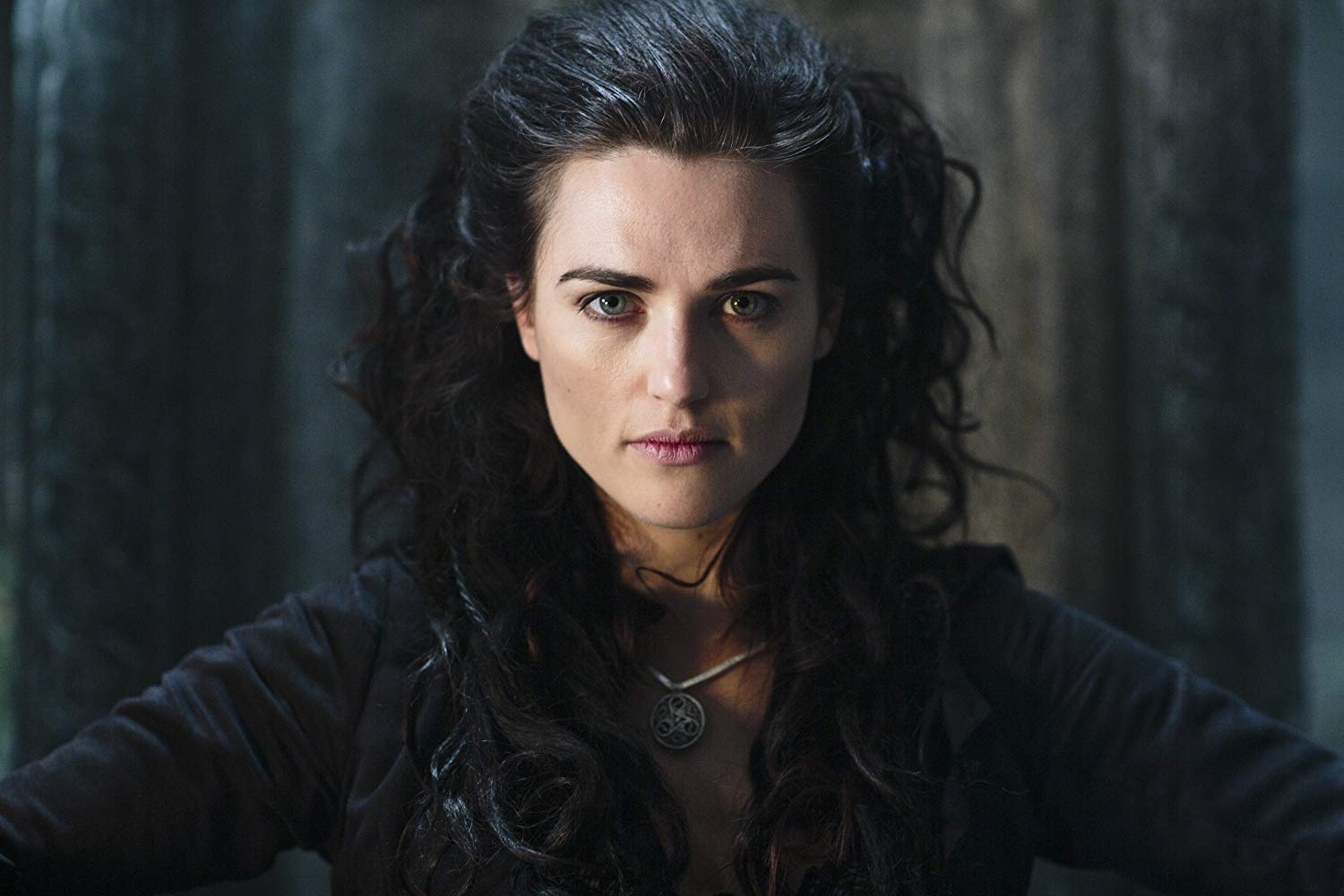 Welcome to Bae Watch Wednesday, where I tell you all about the fictional characters you ought to be crushing on. This week’s bae is Morgana Pendragon!

Who Is Morgana Pendragon?

Morgana Pendragon is one of the main characters of the BBC series Merlin. The show is a revision of the familiar Arthurian legend, where we meet the fabled heroes as young adults. Morgana is a ward of the king, Uther Pendragon. She was taken in by Uther as a favor to her parents, friends of Uther, after their deaths. Although she was not royalty, she was raised as a lady of the court and treated similarly to Uther’s own son, Prince Arthur. Morgana was a headstrong child, even learning how to fight, but well settled in her role as Uther’s ward.

By the time Merlin starts, Morgana is a young lady, secure in her station. She frequently argues with Uther, not caring about the precariousness of her position. In particular, she disagrees with Uther’s perspective on magic. After the death of his wife, Ygraine, Uther outlawed all magic in Camelot. Any form of sorcery is punishable by death — in fact, the first thing we encounter in Camelot is an execution. When Uther throws a feast afterward, Morgana argues that there is nothing worth celebrating in a man’s death. She and Uther had a brutal fight, with Morgana arguing that he created his own worst enemies.

Merlin, who recently arrived in Camelot and was forced to hide his magic, finds an unlikely ally in Morgana. Despite the difference in their stations, Morgana’s empathetic nature sees Merlin as a person, not just a servant. Though she does not know about Merlin’s magic, she is willing to support him and help him in his early adventures in Camelot. Morgana is also close to her own servant, her maid Guinevere. Morgana’s relationship with Gwen makes her care about the servants, and she frequently defends them against other nobles (and Uther).

Morgana’s life starts to disintegrate around her as her nightmares, which had long plagued her, grew worse. She took potions from Gauis, the court physician, to help her sleep, but she still dreamt of horrible things every night. The problem was that they were not dreams; they were visions. Morgana panics at the thought of being a seer, since any magic use, whether or not it was by choice, was punishable by death. The man who raised her as his daughter would execute her in a heartbeat, and all for something she neither chose nor wanted.

Merlin is a comfort for Morgana at first. Although he does not reveal his secret — he is also a sorcerer – he is able to reassure her that she is not innately evil, even helping her contact the druids for advice. Unfortunately, they are not the only ones to advise Morgana. She is contacted by Morgause, her half-sister and a powerful magician. Morgause began to turn Morgana against Camelot, preying on her fear and resentment of Uther’s unfair prosecution. Although Morgana is merely happy to have family and support, Merlin fears that she has turned against them, and grows suspicious of her.

When Morgause casts a sleeping spell on Camelot that is tied to Morgana’s life force, Merlin makes a terrible choice. He poisons Morgana, knowing that this will force Morgause to end his enchantment. However, this betrayal breaks Morgana. Merlin had been the one person she trusted, and he was willing to kill her. This also pushed Morgana further into Morgause’s cause. Morgause rescued Morgana from Camelot – and Merlin – and they spent a year together, furthering both Morgana’s skill and her bitterness. When she returns a year later, she returns to her normal life, but all is not as it seems.

Morgana begins an active, if hidden, campaign against Camelot and Uther. She plots many attacks against the king, though she is constantly thwarted by Merlin. Eventually, though, she is successful in killing Uther, even making Merlin a part of her plot. This puts Arthur on the throne, though he is turned against magic by its role in Uther’s death. Morgana isn’t satisfied by Uther’s death; she wants the throne for herself. Morgana learned that she was, in fact, Uther’s illegitimate daughter, but he was ashamed of his actions. He also refused to acknowledge her as it would disinherit Arthur.

Determined to claim her birthright and confident that she would rule Camelot better, Morgana attacked the crown. She becomes bitter and ruthless, even sacrificing Morgause to her cause. Morgana tries to ally with Camelot’s enemies, though one by one they all fail her. She was even captured and held in prison for two years, living in eternal darkness. She’s not quite alone — at some point, she acquired a dragon companion, Aithusa – but her sanity is broken even further at this point. Morgana becomes obsessed with ending Arthur’s reign and defeating his magical support, Emrys (who she does not know is Merlin).

Morgana’s attempts get more and more vicious. She even manages to turn Arthur’s queen, Gwen, against him, breaking Gwen via torture. The tides are turned when Merlin manages to alienate Mordred, a knight of Camelot. Mordred was a druid — he was saved from persecution as a child by Merlin and Morgana. When Mordred reveals Emrys’ identity, Morgana makes her final move. She incapacitates Merlin and attacks Camelot’s forces on the battlefield. Merlin returns, thwarting her plans once more, though he is unable to save Arthur from Mordred’s sword. In the end, a broken Morgana is killed by Merlin.

Why Is Morgana Pendragon Bae?

The figure of Morgan le Fay is almost as central to Arthurian legend as Merlin and Arthur himself. She is a figure of mystery, and various adaptations have made her a hero and a villain at turns. Merlin gives us a showstopping Morgana Pendragon who is both hero and villain, played magnificently by Katie McGrath.

McGrath does an excellent job showcasing the descent into madness and villainy that Morgana undergoes. She is eminently sympathetic and believable as the kindhearted and passionate ward of the king, and you really root for her. However, she is just as fantastic at showing Morgana’s darker side (McGrath is particularly skilled at the deceptively evil).

Merlin’s Morgana is a tour de force of character development. I’m not saying Morgana Pendragon is the inspiration for my dissertation on Arthurian legend, but I’m not not saying that.

Although Merlin may be the protagonist of the show, Morgana is a far more interesting and exciting hero. She’s just a hero for different people. While Merlin dedicates his life to protecting Arthur and the crown of Camelot, Morgana becomes a champion for the people. This plays into her moral core. Morgana believes strongly in doing what’s right, no matter the cost, and stands up for the unfortunate, those who have no other advocate. She’s even willing to actively fight for them – she wields a sword better than most (such as Merlin) and is not afraid to use it.

As Morgana’s moral center starts to disintegrate, she still remains a champion for the downtrodden. She just changed her focus to those specifically persecuted by Uther for their magic. Morgana helps the druids, saving young Mordred from execution. She later tries to protect the druids when Uther attacks them, falsely believing they’d kidnapped her (when really she was trying to learn from them). She even forms a close bond with the dragon Aithusa, despite the fact that Aithusa was hatched by Merlin. Morgana relates to the deformed Aithusa, and they cling to each other in their shared captivity. Aithusa is the last good thing Morgana has, until the end.

It’s as things really started to break down that Morgana loses her champion nature. She still believes she is a champion for magic users and is incensed that they choose to follow Emrys over her. After all, she is fighting for their rights, whereas Emrys props up the current regime. In her bitterness, she can’t see that she is making things worse for her people, by playing into every negative stereotype. But at this point, she can no longer see the reason. All she sees is hatred.

Morgana Pendragon is one of the most sympathetic villains I’ve ever encountered. This is, of course, because she didn’t start off as a villain. In fact, Morgana starts off the show as one of the best characters in Camelot. She is empathetic and cares deeply about the people – all the people, unlike most other nobles. She openly defies the king to advocate for fair treatment, even knowing Uther’s intense hatred for magic. Most notably, Morgana stands as a foil for the callow Prince Arthur. Arthur is a bully and falls in line with Uther’s expectations, to the detriment of others at times. Not so with Morgana.

It’s Morgana’s innate core of goodness that makes her turn so heartbreaking. And Merlin, our hero, is much to blame for this turn. He knows how lost and alone Morgana feels as she discovers the truth of her magical identity, but does not confide in her. He leaves her open for Morgause to manipulate, finally chasing her right into Morgause’s arms with his ultimate betrayal. By poisoning Morgana, Merlin broke her trust. It was easy for Morgause to convince Morgana that Camelot was against her. Uther’s betrayal is hurtful, but Morgana always fought with Uther; she believed Merlin was her friend.

It’s after these betrayals that Morgana becomes the villain that she ends up. She becomes worse than Morgause or any of Camelot’s other enemies, single-mindedly focused on her revenge. She forgets everything good about her experience in Uther’s court, throwing away the relationships she’d developed with Arthur and Gwen in pursuit of the crown. In her quest to get what she thinks she deserves, she lost everything she’d had. In the end, she is left bitter and alone, defeated before she can enjoy her victory. She won, but at what cost?

Morgana’s story has much in common with another problematic fave of mine: Loki. Both are royals raised without knowledge of their true birthright, always in the shadow of the king’s favored son. They only turn because of the betrayal of those they trusted most, ultimately turning to unspeakable evil. The difference is that Loki was given a chance to (arguably) redeem himself. The tragedy of Morgana Pendragon is that she has no such chance. As the audience, we are left haunted by what could have been, if only things had gone a different way.

What if Morgana had been raised as Uther’s acknowledged heir? How would Camelot have flourished under the reign of a compassionate, honest magic-user? Or even more directly in line with the show: what if Merlin hadn’t betrayed Morgana? Morgana had been bitter and upset with Uther for a long time, but given the chance to assassinate him, she decided to save him instead. She was still innately good, even with Morgause’s influence. It was Merlin’s betrayal that ultimately broke her and pushed her to what she became. What if that hadn’t happened?

Unfortunately, we’ll never see what could have been. What we get is the tragic story of a broken, betrayed woman. Morgana’s story becomes one of revenge and hatred, despite her kind beginnings. But it’s honestly a little understandable. So many horrible things happened to her. Is it any wonder that she turns against those who hurt her? But the thought of what could have been made her story all the more tragic. Morgana was so good, and she could have done so much good. Instead, she loses everything, destroying everything good in her path. It’s painful to watch, especially because Morgana deserved better.