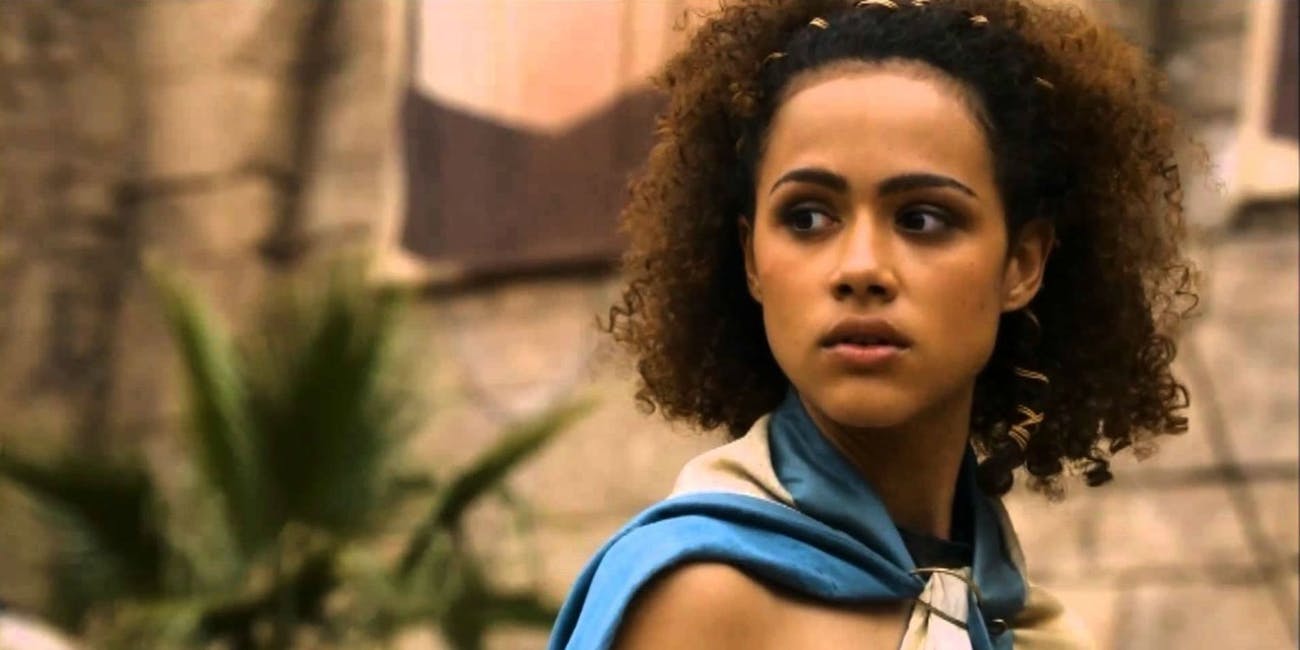 Welcome to Bae Watch Wednesday, where I tell you all about the fictional characters you ought to be crushing on. I’ve still got Game of Thrones on my mind so this week’s bae is Missandei of Naath.

Who Is Missandei Of Naath?

Missandei of Naath is one of the secondary characters in Game of Thrones (a rather crowded field in the ensemble cast that is Game of Thrones). She was introduced in season three and became a regular figure in the storyline that follows Daenerys Targaryen in the east, as Daenerys’ majordomo and one of her primary advisors.

But Missandei of Naath had a far different upbringing than Daenerys’ other advisors. Born on the island of Naath, Missandei lived there until she was five. When she was five, Naath was attacked and Missandei was taken as a slave. She doesn’t remember much, just the sight of Naath as she was taken away — blissful beach scene marred by fire as her village burned. Five-year-old Missandei then became the slave of Master Kraznys, a high ranking slave owner and trader in Astapor, one of the cities on Slaver’s Bay.

Since Missandei was intelligent and had a gift for language, she held a high position among Kraznys’ slaves. She spoke 19 languages, which made her valuable for Kraznys’ dealings with the customers who came to purchase his slaves. Kraznys trained the Unsullied, a slave army that had a reputation as one of the best. The training was brutal and cruel, with Kraznys determined to root out any weakness in his army. The Unsullied were castrated to remove distractions, and forced to kill babies to prove their worth.

When customers came to purchase Unsullied, Missandei would serve as a translator for Master Kraznys. This meant more than just translating Kraznys’ words from one language to another; as Master Kraznys was brutish and crass, Missandei had to translate his words to something far more polite. This required a great deal of tact and intelligence, which Missandei provided handily.

Everything changes for Missandei when Daenerys Targaryen arrives in Astapor seeking an army to retake her homeland of Westeros and ascend to her rightful throne as queen of the Seven Kingdoms. Though Daenerys is the rightful heir, she has no way to take her rightful place. She has no army, and very little money. All she has is a dedicated small group of people who love her but cannot fight for her — and three dragons.

Kraznys is not impressed with Daenerys, who needs money to earn his respect. He shows her his soldiers and sells them up, leaving Missandei to translate his foul language and rude commentary into facts and figures. Kraznys sees Daenerys as a dumb foreigner who he can take advantage of. Little does he know that Daenerys is far shrewder than he thinks. When Kraznys says her money will buy her a little over 100 soldiers, far fewer than the 8,000 she requests, she offers him a deal he can’t refuse: a dragon for his soldiers.

When Kraznys agrees, Daenerys also demands he give her Missandei as a gift and a sign of favor. Daenerys then immediately frees Missandei; she has no desire for slaves. She shows this when she returns to collect the Unsullied. When Kraznys officially hands them over to her, she directs them to kill the slavers and take their freedom by force. She also kills Kraznys by having her dragon set him on fire because “a dragon is not a slave.” In one fell swoop, Daenerys cripples the Astapor slave trade, acquiring a devoted army of freed Unsullied in the process. She could head to Westeros and take her throne, but instead chooses to go to the other slave cities and free as many slaves as she can.

Though Daenerys did not need Missandei’s talents as a translator — she speaks Valyrian and understood every word Kraznys said about her — she uses Missandei as an advisor. Daenerys is not from Essos, and the customs of the country are foreign to her. While she will not stand for some traditions — slavery is right out — she does want to do her best for the people she frees. On a path of conquest, Daenerys frees the slaves in Yunkai and Meereen, where she establishes herself as queen in order to provide stability and control.

Missandei is very helpful through this. As an intelligent, thoughtful person who is from Essos, she keeps Daenerys on the right track. She also provides a counterbalance to Daenerys’ other counselors, all men, mostly from Westeros. Although Daenerys values their advice, she values Missandei just as much, if not more. Missandei also becomes something Daenerys truly needs — a friend. Daenerys has long been too alone and unable to open up to anyone, holding herself apart as a queen. Now she has someone to be herself with.

During this time, Missandei is also developing another relationship. The leader of Daenerys’ army is Grey Worm, an Unsullied who was chosen by his comrades as a leader after Daenerys frees them. Grey Worm goes to Missandei to learn the common tongue and develops feelings for her. Missandei is interested in Grey Worm as well, but he keeps her at arm’s length. As an Unsullied, Grey Worm was raised to cut out relationships and personal feelings. He sees Missandei as his weakness. But they eventually come to an understanding of what matters in life. They get together right as Grey Worm goes off into a dangerous battle. They managed to snatch some happiness right as danger came for all in Westeros.

Why Is Missandei Of Naath Bae?

Nathalie Emmanuel is beautiful, and she looks great in the costumes typical to Essos characters (though she looks great in anything). It’s also nice to see a woman of color in Game of Thrones, where almost all the main characters — and every single other major female character — are white. Emmanuel adds some much needed diversity to the show, and it’s all the better for her presence.

One of the most interesting things about Missandei of Naath is her intelligence. Game of Thrones does a good job of portraying its female characters as every bit as intelligent as the male characters, with unique strengths and weaknesses. They’re not shown as fundamentally weaker than the men, nor are they seen as monolithic. Some women are smart tactically in battle, like Brienne of Tarth or Arya Stark. Others are shrewd politically, like Cersei Lannister or Sansa Stark. The women are allowed to be diverse in their intelligence.

For her part, Missandei is seen as fairly purely and straightforwardly smart, more book smart than most characters in the show, and dedicated to education. She has a natural talent for languages that, presumably, has been nurtured and developed beyond what most people would even think to attempt. Daenerys is astonished to learn that Missandei speaks 19 languages, wondering at the feat. She doesn’t see how it’s possible for any person to learn that many languages, let alone speak them as fluently as Missandei. To Missandei, it’s not a big deal; it’s just what she’s good at and what she enjoys doing, so she’s going to do it well.

Most likely, Missandei’s skills with language saved her a great deal of unpleasantness. Life is not easy for female slaves in Game of Thrones, with the most common example being “bed slaves,” or unpaid prostitutes. These women could expect nothing but trouble, rape and violence being far too familiar to them. Missandei likely managed to escape their fate because of her skills. But it’s also clear that she truly enjoys it. She teaches Grey Worm easily and happily, quickly teaching him the common tongue. Missandei’s true fate is being the most renowned polyglot in Westeros or Essos.

Perhaps even more interesting — and impressive — than her linguistic talents is Missandei’s kind and gentle nature. It would be easy, natural even, for her to be bitter and cynical. She was stolen from her family and her home as a very young child, and watched her village burn as she was taken away to be a slave. She was the property of a man who was one of the worst examples of humanity, coarse and crass and cruel, and who committed countless brutalities against his slaves.

No one could fault Missandei if she turned her back on humanity and hardened her heart. Instead, she retained an inner kindness. Even before she is freed by Daenerys, she shows a gentle nature. Kraznys is brutish and foul, his language unfit for any society. In contrast, Missandei takes the general message and puts it in good words, makes him sound more intelligent and fair-minded. After she is freed, she continues to work for Daenerys, providing companionship and advice. She even seems proud of her friend and her accomplishments. Missandei is also gentle and kind with Grey Worm, who needs kindness more than most.

In Game of Thrones, there are very few good characters. Almost everyone is flawed in some fundamental way. Characters are cruel, sexist, violent, ignorant, any number of terrible complaints. And these are the characters we’re supposed to root for. Every so often we’ll get a character who is good, only for them to die (thanks Ned Stark). But Missandei stands there, quietly good. She is a reminder that there can be good people, even people who have more reason than most to be flawed. She will not let her awful past ruin her for the future, but will instead live the best life she can.

What’s Not To Love About Missandei Of Naath?

Missandei of Naath is not one of the main characters in Game of Thrones. With splashy, attentiongrabbing characters like Daenerys Targaryen, Jon Snow, Cersei Lannister, and others, there’s a lot going on in the show. There are so many different plot lines and stories happening all at once, each with a cast of characters all its own. Game of Thrones is one show that needs the “previously on…” because there is so much happening that it can be hard to keep things straight.

As a secondary character on just one of those plot lines, it would be easy to overlook Missandei of Naath. Daenerys’ court contains a wide variety of characters, from Jorah Mormont to Daario Naharis and more. There are a lot of characters to keep track of, a lot of names to remember. But despite the crowd — or perhaps because of it — Missandei of Naath stands out. Her quiet nature and keen mindset her apart from the warriors and rash idiots that surround her and the queen. Her calm presence is invaluable for helping Daenerys actually rule, and not just run over, the people she liberated.

In a show where even your favorite characters are fucked up in some way or other, it’s remarkable that Missandei exists. Yet, she is wonderfully and admired for her intelligence. Daenerys Targaryen, of dragons, is astonished by what Missandei can do. Missandei is also kind. Her relationship with Grey Worm is the softest thing you can imagine, set in high contrast against all the other relationships in Game of Thrones, which are terrible. Missandei of Naath may not be a protagonist, but she deserves all the love. She is a reminder that there are good things, even in Westeros.