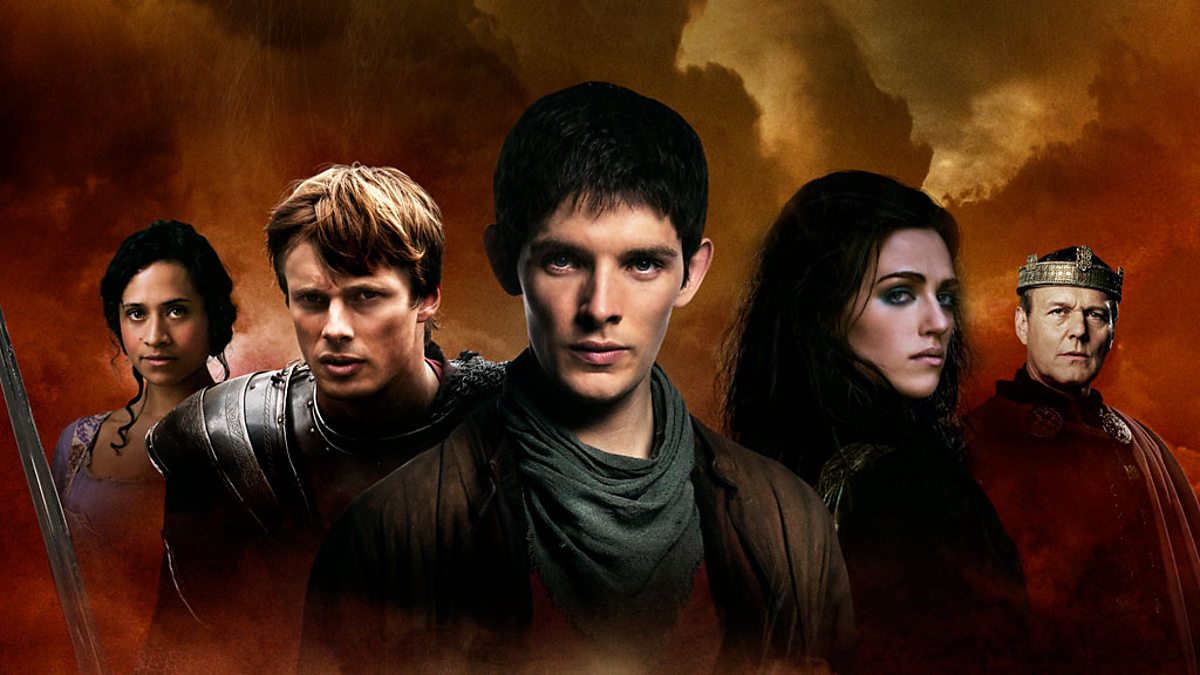 Welcome to Bae Watch Wednesday, where I tell you all about the fictional characters you ought to be crushing on. I recently started rewatching BBC’s Merlin, so let’s talk about the most famous warlock in history: Merlin himself!

Merlin is the main character of the BBC show named after him (pretty straightforward). The show is based on Arthurian legend and features the adventures of the famous magician as he goes about his days in Camelot. We join Merlin as he first arrives in the city, where his mother has sent him after others in his village grew suspicious of his mysterious gifts. You see, in this Camelot, magic is illegal.

This is not the only change from what we may consider the “standard” Arthurian narrative. Merlin is usually depicted as an old man with a long, white beard. By contrast, BBC’s version is a young adult, although he does occasionally masquerade as an old man for safety’s sake. Merlin is obviously not a powerful court sorcerer or anything of the like, since magic is outlawed. Instead, he is a servant to Prince Arthur.

Yes, prince. In the BBC version, Arthur is not king of Camelot — at least not at first. Early in the show, Camelot is ruled by Uther Pendragon, who was the one to outlaw magic. Uther is harsh, vindictive, and arrogant. He frequently dismisses Merlin — the most powerful person in the world — as a mere servant. Arthur, however, values his strange and unexpected friend, though they weren’t always friends.

When he first arrives in Camelot, Merlin tussles with Arthur. Arthur was a bit of a bully, and Merlin called him out. He could not denounce the arrogant prince enough. However, by the end of the first episode, he saves Arthur’s life. Uther “rewards” him by making him Arthur’s servant. The two mutually dread spending so much time together, but a beautiful friendship develops between them.

Merlin soon settles into life at Camelot. He continuously saves the prince’s life from the crisis of the week. He quickly learns that it is his destiny to protect and guide Arthur, who is meant to unite the kingdom of Albion. That is the reason for his impressive and unusually instinctive magical powers. Although he is pleased to finally know why he is the way he is, he isn’t exactly thrilled with the assignment.

Merlin learns of his fate from Kilgharrah, the Great Dragon. Dragons, of course, are creatures of magic, so they were hunted in Uther’s Camelot. Kilgharrah is the only one left, and he is chained up in Uther’s dungeons. Merlin turns to Kilgharrah often for advice, though the dragon is usually frustratingly cryptic. He also demands a price for his help: the young warlock must free the dragon. Once freed, Kilgharrah terrorizes Camelot. Merlin is able to subdue him after learning he is the last dragonlord, saving Camelot once again.

Kilgharrah isn’t the only magical creature our hero faces. Over the course of the series, Merlin will encounter gryphons, unicorns, and more. He often has to save Arthur from these creatures. He also faces off against dark magicians. These individuals lend credence to Uther’s prejudice. Merlin must defeat these dark magicians without revealing his own powers — a difficult task.

Another oppressed group of non-evil magicians also comes into play — the Druids. Victims of Uther’s anti-magic bias, the Druids were hunted and always in danger. Merlin helps them when he can, as he feels a kinship with these magical people. The Druids also reveal his true name: Emrys. Merlin will take on the name Emrys as well as a disguise to help Arthur more overtly through magic without revealing his secret.

Our hero starts as a goofy kid with a vast, instinctual power. Over time, he will develop into the most powerful sorcerer the world has ever seen. He does so with a lot of hard work, which the show points out. Merlin lives with Gaius, who was friends with his parents… and is also a minor magician himself. He is able to guide the young warlock as he grows in knowledge.

Merlin also learns from experience. He goes on many adventure with Arthur. Over time crisis-of-the-week episodes begin to give way to more overarching issues, especially once Uther dies and Arthur becomes king of Camelot. Uther’s death was not natural; he was killed by magic (karma). “Emrys” tries to help but fails. This starts off Arthur’s reign in darkness. Seeing his father killed by magic leads the normally more progressive Arthur to uphold his father’s bias.

At the same time, a powerful dark magician is rising. Lady Morgana had been a staple of Camelot’s court as Uther’s ward. The show demonstrates from the start that Morgana is empathetic and compassionate. Unfortunately, she also struggles with latent magical powers. The pressure started to twist Morgana, and she snapped when she learns she is actually Uther’s daughter — but cannot be acknowledged because it would disinherit Arthur.

Now on a campaign to gain her rightful place on Camelot’s throne by force, Morgana plunges the land into conflict. In the end, “Emrys” turns the tide in a great battle. Unfortunately, Arthur is mortally wounded. Merlin defeats Morgana but loses Arthur, his best friend, though he reveals his true self before Arthur dies and finally gains some recognition. Emrys lives on, waiting for the return of the once and future king to save Albion.

Why is Merlin Bae?

Colin Morgan is one of those actors. A la Benedict Cumberbatch, Colin Morgan is tall, British, and kind of gangly, with ridiculously sharp cheekbones and large ears. Taken individually, these traits should make an awkward looking person. But — somehow — Colin Morgan remains attractive. I don’t get it — where does the BBC get these men?

Cheekbones so sharp you could kill a man.

But Merlin is bae for more reasons than killer cheekbones. He is actually a very entertaining character to watch. In the style of most of BBC’s work, the show is witty and fun, while occasionally giving in to less mature impulses, and our hero is no different.

For the most part, Merlin is a snarky, sarcastic delight. He continuously sasses off to Arthur, even though it literally lands him in prison the first time he does so. But he will not let the looming threat of the stocks stop him from keeping the prince’s massive ego in check. I think this is one of the reasons they become such good friends; Arthur needs someone who isn’t in awe of him. In a particularly great moment, Merlin calls Arthur a “clotpole” — making up new words just to mock your friends, as you do.

Merlin is fun to watch interact with other characters as well. Gaius is honestly too great and he — despite being one of the very few people who know the warlock’s true powers — never hesitates to treat Merlin like a disobedient child (or surly teenager). Their relationship gives me life.

Guinevere — Gwen — also befriends our hero. Gwen starts off as a servant to Morgana and quickly hits it off with the dashing yet awkward Merlin. They are both adorable and awkward and give each other great support. And there’s no way I can not mention Gwaine (sigh, Gwaine). Gwaine is a swashbuckling alcoholic who gets along great with Merlin and is one of few people who learns the truth about him. Their dynamic is fantastic, all the time.

For all his snark and awkwardness, however, Merlin is also great because he is the most powerful person in the show — despite being “only” the servant to a king. Here is this boy, who comes from nothing, works as a servant, has to deal with royal demands… yet he is secretly the most important person in the world. There’s something truly inspiring about that.

And Merlin deserves that recognition. He continuously saves all of Camelot — and especially Arthur — from certain doom. He never hesitates to give his all, even his life, if it means the greater good. Although he was not thrilled at first with the idea that it was his destiny to protect Arthur, he never shirks in his duty.

Sure, a lot of times the show is super campy. The CGI alone is enough to turn most people off. But if you look past the camp you’ll find an epic story about a young boy who becomes the most important person in the world. Merlin changes lives. He saves people, helps others, and brings together people who need to meet but wouldn’t normally — forming the Knights of the Round Table as a fairly diverse group.

Throughout the show, Merlin overcomes so many obstacles to fulfill his destiny. He learns that he is the last Dragonlord and allies with the last dragon. He defeats a powerful dark magician in Morgana, as well as several lesser dark magicians. It is through Merlin’s influence that Arthur becomes a good king — not just in saving his life, but in giving advice and guidance and support. Albion only exists because of him.

BBC’s Merlin is a new spin on the Arthurian legend, but it’s not without some positives. By portraying the hero as a young man who has to learn who he is, what he can do, and what he needs to do, the show gives new life to an old legend. It also serves as an inspiration to young fans. Even if you feel insignificant, you could be truly important to the greater narrative.

Merlin is a great hero, even if he’s not always heroic. He’s a powerful magician who tackles the greatest threats to the kingdom with no hesitation. In fact, he usually does so with ease and a hefty dose of snark. He brings together other important people and helps shape the destiny of Albion — pretty impressive for a servant. And he does this all without revealing his powers, since that could get him killed.

Watching Merlin is worth the cheesy CGI and campy stories because of its protagonist. I never get sick of watching Merlin mouth off at Arthur, while simultaneously saving his life and giving him advice. The show is one of the best retellings of Arthurian myth I’ve seen, and much of that comes down to the young warlock who guides and shapes destiny.