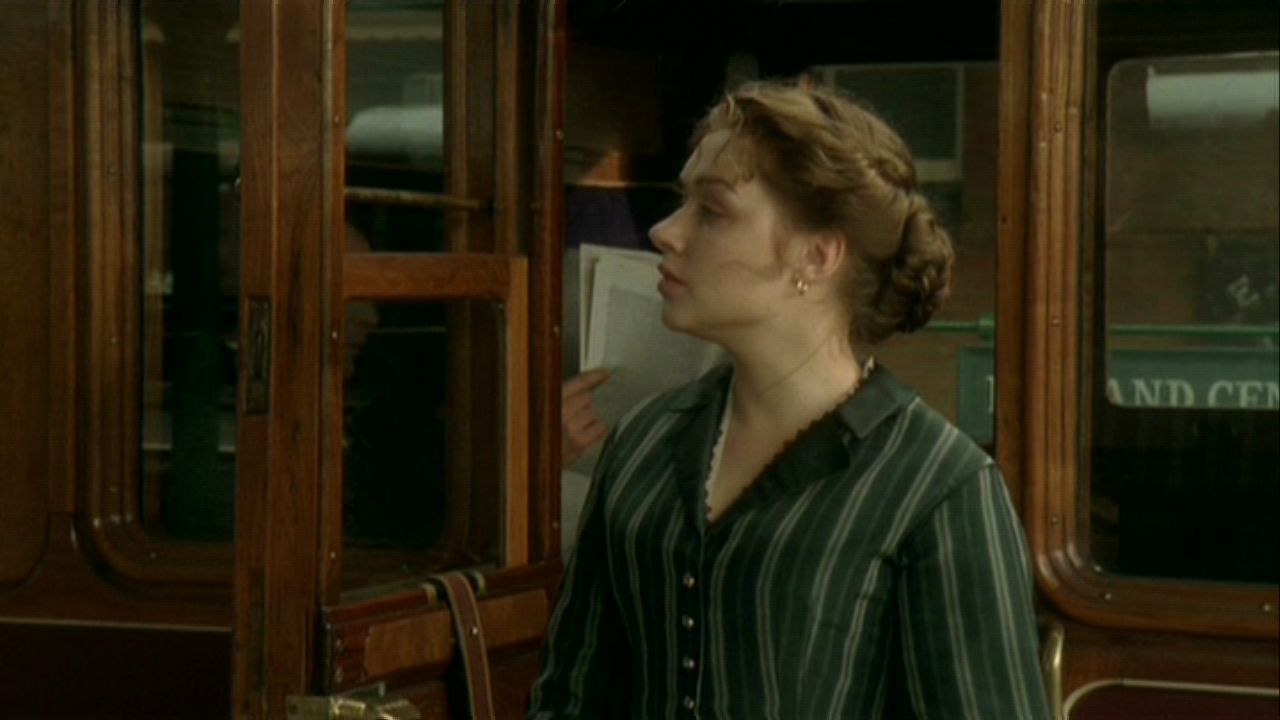 Welcome to Bae Watch Wednesday, where I tell you all about the fictional characters you ought to be crushing on. For romantic February, I’m focusing on some of my favorite romances. This week I am dying to talk about North & South’s protagonist, Margaret Hale.

Who Is Margaret Hale?

Margaret Hale is the protagonist of the Victorian miniseries North & South, based on a book of the same name by Elizabeth Gaskell. Over the course of the four episodes, Margaret endures a great deal of change, most of it unpleasant. Through it all, though, she maintains a refined composure and goodwill. The series starts as Margaret is on a train. She remembers the recent past, when her cousin Edith was married. Despite her love of Edith, Margaret wants nothing more than to leave London and return to her idyllic life in Helstone, where her father is a reverend. Once returned to Helstone, however, things go awry.

First to ruin Margaret’s peace is a visit from Henry Lennox, Edith’s new brother-in-law and a good friend. Henry attempts to propose, though Margaret cuts him off. She does not want to marry. Then comes the real blow: the family is leaving Helstone, and moving north to Milton. Thus, Margaret finds herself on a northbound train, trying to reassure her mother.

Life in Milton is difficult, and Margaret struggles to adjust. The northerners are brusque and quick to take offense, with none of the southern manners Margaret is used to. Then, there is the gossip; because her father left his position and moved the whole family far away from their roots, people are speculating that he has done something wrong.

Margaret is determined to make the most of things, though. She throws herself into establishing the family, helping her father secure lodgings. When her attempts to help are derided by a servant of one Mr. Thornton, she determines to speak her piece directly to Thornton. When she goes to the mill to speak, however, she finds him in a high temper, and is shocked by what she sees.

After the rough impression she got of Mr. Thornton, Margaret finds it even harder to adjust to Milton life. Things get worse when Margaret discovers that Thornton has befriended her father, learning the classics from him (and providing the family some much needed income). Although Thornton endeavors to be civil, Margaret can’t shake the initial impression, and rebuffs him.

The rest of Milton society isn’t much easier for Margaret. Thornton’s mother and sister, Fanny, come to visit, but Mrs. Thornton is proud and takes offense at the new arrivals, while Fanny is shallow and thoughtless. Still, Margaret does make one friend. Bessy Higgins, a worker at Thornton’s mill, remembers seeing Margaret confront Thornton that day. When Margaret approaches her, Bessy doesn’t rebuff her, though they are from different worlds.

Margaret’s friendship with Bessy is one of the grounding points of her life in Milton. It helps her deal with the loneliness of being so far away from her former life. It’s also an education; Bessy is working class, as opposed to Margaret’s gentility. Bessy’s father Nicholas is also a firebrand union rep, who frequently clashes with the mill masters. When strike comes to Milton, Margaret is torn. In society, she brushes with the mill owners, but her relationship with the Higginses has shown her the other side.

This leads to further conflict with Mr. Thornton, who sees the strike as an unfair attack on the mill owners. When the strikers riot after Thornton brings in Irish workers to reopen the mills, Margaret chastises him to treat his workers as human beings. When they turn violent, though, Margaret throws herself between him and the strikers, trying to protect him but sacrificing her reputation in the process. She also finds herself with a nasty blow to the head.

After her actions at the riot, Thornton proposes to Margaret. He has fallen in love with her, for her fierce spirit and intelligence, but she will not have him. She rejects him, perhaps a little unkindly, and Thornton stalks off, determined to have nothing to do with her. Unfortunately, Milton society is not so large as to allow them to avoid each other.

Unfortunately, things get worse before they get better. When Margaret’s mother takes ill, she writes to her brother Frederick, a disgraced Naval officer who could be executed for mutiny. This requires great secrecy, and Frederick must leave in the dark of night when someone from Helstone spots him. Margaret brings him to the train station, and Thornton catches Margaret in an embrace with a strange man on a train platform at night.

When the man who confronted Frederick dies, there is an inquest and Margaret is called upon for being seen at the scene. Thornton is called in as magistrate, and fixes things so that the inquest is cancelled, though he judges Margaret for her actions. Sadly, by this point in time, she has seen the merits of this northerner, and her feelings have changed just as his seem to have chilled.

Further tragedy comes when Margaret’s father follows her mother into death soon after. Orphaned, Margaret leaves Milton to return to her family in London. There’s a moment where Thornton seems ready to speak, but she leaves. She later comes into a large inheritance from her godfather, who owned the building of Thornton’s mill. When the mill closes due to financial difficulties, Margaret comes to offer a purely business proposition to keep it running. Thornton, however, sees that the woman he loved has come home, and they return to Milton more than business partners.

Why Is Margaret Hale Bae?

One of the great disappointments of North & South is that, by the time I discovered it, since it came out in 2004, many of the actors have faded into obscurity. That’s a damn shame because Daniela Denby-Ashe is magnificent as Margaret Hale, and I’d love to see more of her. Denby-Ashe is lovely, in a soft way perfect for the Victorian setting, and she brings a refined beauty to the series.

Denby-Ashe also brings just the right personality to the role of Margaret, who in my opinion is everything people like to think Lizzie Bennett is (I may have strong opinions on how North & South is a far superior version of Pride and Prejudice). As Margaret, Denby-Ashe is the perfect blend of soft and sharp, with a pretty face to boot. Margaret Hale is idyllic to look at, but she’s also fun to watch.

Margaret Hale is my favorite type of Victorian heroine: a bluestocking. A frequent guest in historical fiction (especially romance), a bluestocking was a woman in the Victorian era who was educated and opinionated, frequently with liberal social values. You see bluestockings a lot in fiction written by modern authors, who like to place modern values on historical characters.

What makes Margaret Hale stick out is that this isn’t a case of modern values applied retroactively. North and South was published in 1855. Elizabeth Gaskell wrote the character in a contemporary setting. While I generally enjoy historical fiction and the dynamic female characters I see, they often feel fake. Margaret Hale doesn’t have that same feeling.

Instead, we get a nuanced and realistic bluestocking in Margaret Hale. Margaret is clearly educated, as the daughter of an intellectual man. She has opinions on things, and is put in stark contrast to Fanny Thornton, who is vapid and only concerned with fashion. When Margaret returns to visit Helstone and meets the new reverend, who eschews intellectualism, she gives him a piece of her mind. She never hesitates to share her opinion.

But Margaret isn’t argumentative for the sake of being argumentative. Instead, there are issues she feels strongly about, and she won’t pretend otherwise. These topics tend to be humanitarian in nature, putting her at odds with the business minded (and often cruel) mill masters. When Margaret provides aid and food to starving children during the strike, the mill owners are angry at her. But Margaret argues that it is her moral duty to help those less fortunate. Although her opinions frequently lead her to clash with Mr. Thornton, it is clear that he respects and admires this about her, given his early proposal.

Bluestocking she may be, but Margaret Hale avoids many negative stereotypes. Often, bluestockings are seen as shrill, harsh, and domineering. While this is likely a result of men dominating history, a steadfast dedication to social justice can sometimes lead to a person being more focused on the ideal than the reality. It would be easy for someone like Margaret to be more dedicated to morality than the people around her, but that isn’t the case.

Her interactions with the poor workers of Milton show this clearly. Although she is the daughter of a gentleman, Margaret doesn’t hesitate to befriend Bessy, despite Bessy’s lower social class. She sees in Bessy a good person and an interesting friend, and that matters more than class distinctions. She is even there to help Bessy through the end of her life, as she succumbs to illness borne from working in the mills for most of her short life.

It’s Margaret’s kindness that makes her so likable. She is sweet and goodnatured, though she often clashes with Mr. Thornton. She’s no pushover, that’s for sure. Margaret is always going to speak her mind, and stand up for what she feels is right. But she doesn’t do that to the exclusion of kindness. Even when she fought with Mr. Thornton, she still put herself on the line to defend him. Kindness is underrated and undervalued. Margaret Hale gives us the best combination of spirit and kindness, and it makes her a great character.

I adore North & South. I’ve watched it easily a half a dozen times in the last few years, and every time I’m struck anew how great a story it is. It’s a compelling story, with all of the drama of a period piece without the outdated social values or gender inequality (props to Gaskell for bringing us that all the way from 1855). I like the story enough to consider reading the novel, if I can find it, despite my well-voiced disdain for 19th century literature.

But as good as the story is, a large part of why I love North & South comes down to the magnificent main characters, particularly Margaret Hale. For all I dislike 19th century literature, I love historical romances. They’re probably my favorite genre. I love how modern romance novelists are able to avoid the pitfalls of the genre’s past (literally, I wrote my thesis on this). But for all I love the stories, there’s often a sense of falsehood.

Margaret Hale turns all that on its head. I love romance novels’ upstanding heroines, who possess fine moral fiber and intelligence, while knowing that they likely would not have been a common sight at the time. But then Margaret Hale comes sweeping in, kindhearted bluestocking, completely at home in her era, to steal my heart.

Every time I watch North & South I’m struck by how amazing Gaskell’s characters are. I love John Thornton, too (stay tuned). But Margaret holds a special place in my heart. She is a delightful character, kind, smart, and fully human. She feels real, like someone you might actually meet. Plus, my dumb gay brain says “pretty girl” every time she’s on screen. How could you not love a character like Margaret Hale?