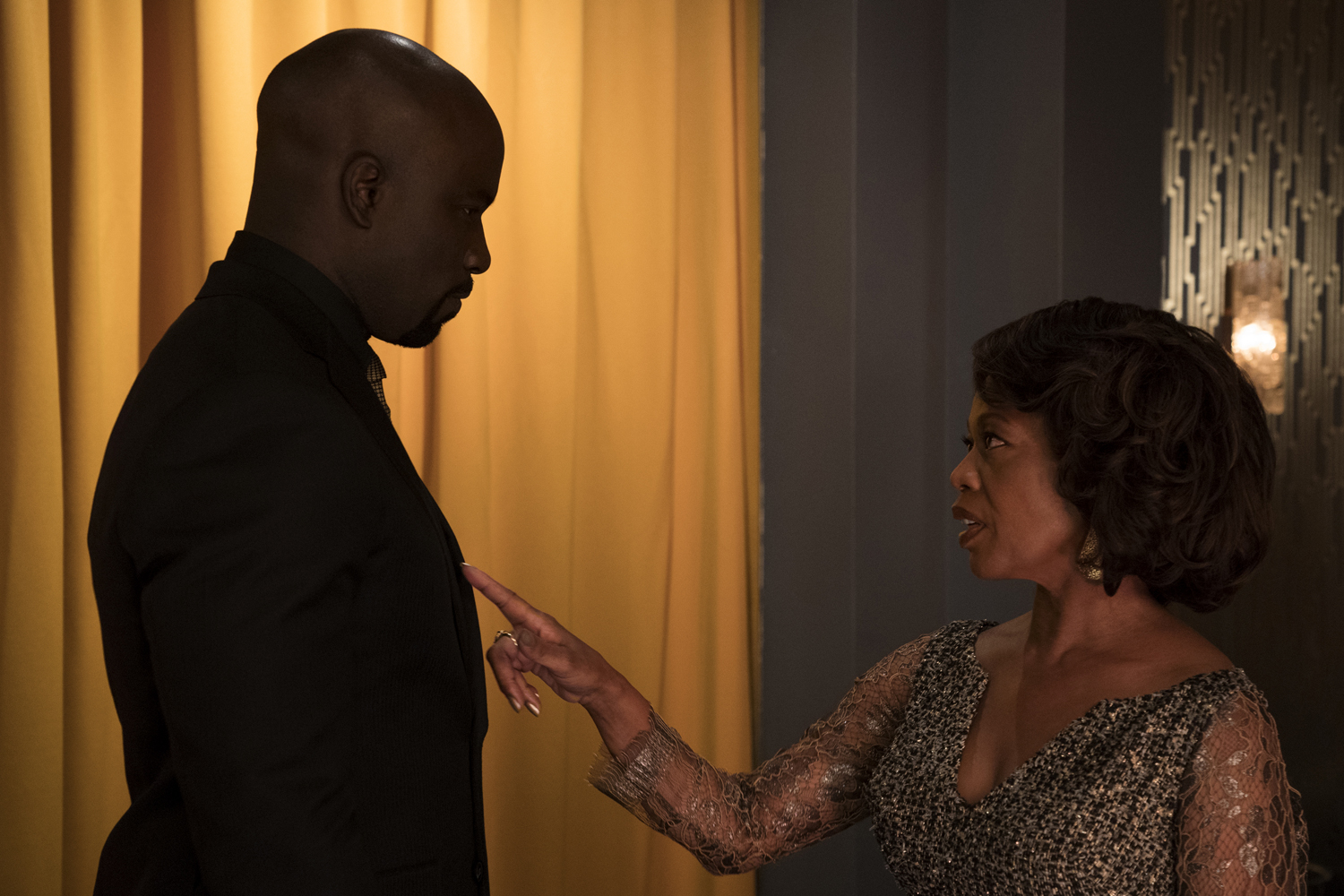 Welcome to Bae Watch Wednesday, where I tell you all about the fictional characters you ought to be crushing on. This week’s bae is sweetheart superhero, Luke Cage.

Who is Luke Cage?

Luke Cage is a Marvel superhero. (For simplicity’s sake, I’m only referring to MCU Luke Cage, not anything from the comics.) Luke first appears in Netflix’s Jessica Jones series before starring in his own self-titled Netflix series and joining the epic team-up series The Defenders.

In Jessica Jones, we learn a little bit about Luke. We get our first introduction to his superpowers — Luke has bulletproof skin and augmented strength. While he is not as strong as kick ass Jessica Jones herself, his invulnerability more than makes up for it. Jessica’s story with Luke is heartbreaking; the two become romantically entangled but are driven apart when it’s revealed that Jessica killed Luke’s wife Reva.

Luke later comes under the sway of Jessica Jones villain Kilgrave and is forced to fight Jessica. For all her strength, she struggles to defeat someone who cannot be hurt and eventually shoots him in the head with a shot gun. She takes him to the hospital where super nurse Claire Temple helps save Luke’s life.

We get a lot more of Luke in his own series, handily titled Luke Cage. After the events of Jessica Jones, Luke is doing his own thing, living a quiet and simple life in Harlem. He prefers to live in anonymity, though his friend Pop is always pushing him to do good with his powers. For his part, Luke just wants to lay low and hope that no one ever recognizes him.

Luke has a long and complicated backstory, like most Marvel characters. We finally get to learn more in a flashback episode. Luke was originally known as Carl Lucas. He was a prisoner in Seagate Prison, a for-profit corporation that conducted medical experiments on the inmates. In Seagate, Carl became interested in prison therapist Reva.

Carl is manipulated into participating in a clandestine fighting ring, and starts to become dispirited. He eventually is attacked to the point of near death, at which point the doctor at Seagate performs an experiment on Carl that will save his life. However, the experiment goes awry and Carl is given invulnerable skin and enhanced strength. He escapes Seagate and runs off with Reva, changing his name to Luke Cage.

Though he wants to improve things in Harlem, Luke is afraid to stand out for fear of being recognized as Carl Lucas. He does not want to go back to prison. When Pop is killed, however, Luke takes a stand. He begins to fight Cottonmouth and, later, Diamondback, criminal masterminds of Harlem. In the end, Luke is successful, but is revealed as Carl Lucas and returns to Seagate. This time, though, he has a lawyer and evidence to prove his innocence.

We next see Luke in Netflix’s team-up series The Defenders. Luke is finally being released from Seagate, and we find out that his lawyer is Daredevil’s Foggy Nelson. When Luke returns to Harlem, it is to reunite with Claire Temple, who he had been developing a relationship with in Luke Cage. However, there is no rest for the weary. Luke finds out that, for all his efforts, things in Harlem are still not great.

When he tries to help out a young man, he runs into the Iron Fist, Danny Rand. He later complains to Claire about this weird guy with the glowing fist… who Claire already knows. She gets the two of them to meet, thinking they can work together. Unfortunately, they clash instead.

Later, though, the two run into each other when Danny confronts the Hand. Luke comes to his defense. The two are also followed by Jessica Jones and Matt Murdock. When they escape, they go to a restaurant to hide and get to know each other. Although there are a lot of hiccups along the way, the foursome will eventually form the Defenders.

In the series, the Defenders are attempting to stop the Hand from achieving their goal of immortality. They are only successful together, though there’s a lot of clashing along the way. Personality issues, differences in morality, even Jessica and Luke’s past, all strive to separate the four. In the end, however, they are successful in stopping the Hand. They also built new relationships along the way.

Luke Cage will have a second season, hopefully in 2018. I can’t wait to see what he gets up to next.

Why is Luke Cage Bae?

Luke Cage is very attractive. There’s no sugarcoating that. He’s tall, strong, and handsome. But there’s a lot more to Luke than superficial attraction.

Luke Cage is a human cinnamon roll. Netflix’s Marvel series are notable for having a darker tone than the film MCU offerings. This comes across frequently in darker heroes with more flawed characterizations. Matt Murdock is violent, Jessica Jones is an alcoholic, and Danny Rand is… well, a lot of things. But Luke? He’s precious, too good, too pure.

Luke is the most warm and caring person Marvel has put out yet. He genuinely wants to help people, and not just in grandiose, city-saving ways. In the first episode, a waitress at the bar Luke is working at is afraid to serve a table on her own, because the men treat her badly. Luke gladly accompanies her, even though he was otherwise busy. Luke saves his landlady, not for money, but because she did not deserve to be mistreated.

There are other details that show Luke to be a downright good human being. He’s an avid reader, especially for African-American literature. He supports Pop’s “swear jar,” and tends not to use profanity (his trademark phrase “Sweet Christmas” is laughingly pure).  He wants to help the youth of Harlem achieve better lives. Luke is kind and courteous to everyone, even the law enforcement taking him back to Seagate.

Being a human cinnamon roll, Luke is great with other people. He’s A+ shipping material. I loved him and Jessica Jones together. Jessica is a damaged person, and Luke was great for her. He made her better, and made her believe in a better future. They were doomed from the start, unfortunately. But even after everything they went through, they were able to be friends in The Defenders.

Then, of course, is the creme-de-la-creme of relationships: Luke Cage and Actual Goddess Claire Temple. The night nurse is a superb example of humanity, and Luke fully appreciates that. The development of their relationship is fun and enjoyable. For all that he is a superhero, Luke never treats non-powered Claire as anything lesser. If anything, he respects her talents as greater than his.

Luke also excels at non-romantic relationships too, though. He develops a friendship/partnership with Misty Knight, a detective. Although they did have a one-night stand, it doesn’t create awkwardness. They are able to work together to achieve great things.

Likewise, Luke is able to create a good relationship with Danny Rand. At first it seems impossible, as they are too different: a poor black man from Harlem and a billionaire white boy? But they both desire to help people, and this shared goal overcomes their differences. Also, Claire trusts Danny, so Luke will.

Luke Cage is a higher caliber human being. However, he’s not better because he’s bulletproof. He’s better because he’s a warm, caring, intelligent, genuinely good individual. Luke is incredibly likable, for the quality of his personality rather than his powers.

It cannot be overstated how important Luke Cage is. In this day and age, with police brutality and systemic racism reaching a boiling point, it’s amazing that not only is Luke a hero, but he’s quite possibly the best one. This is a black man in Harlem. He was unfairly imprisoned, and mistreated while in Seagate. He wears hoodies. To see this character not only achieve great things, but be something better than even the other heroes, is fantastic.

I really enjoyed the Netflix Marvel offerings. They are, for the most part, incredibly nuanced and interesting offerings. But Luke Cage stands out even among such illustrious company. The show is rich, well-developed, and has an important social message. More than that, however, it gave us a great character and a good hero. Luke Cage is the man we should all admire.