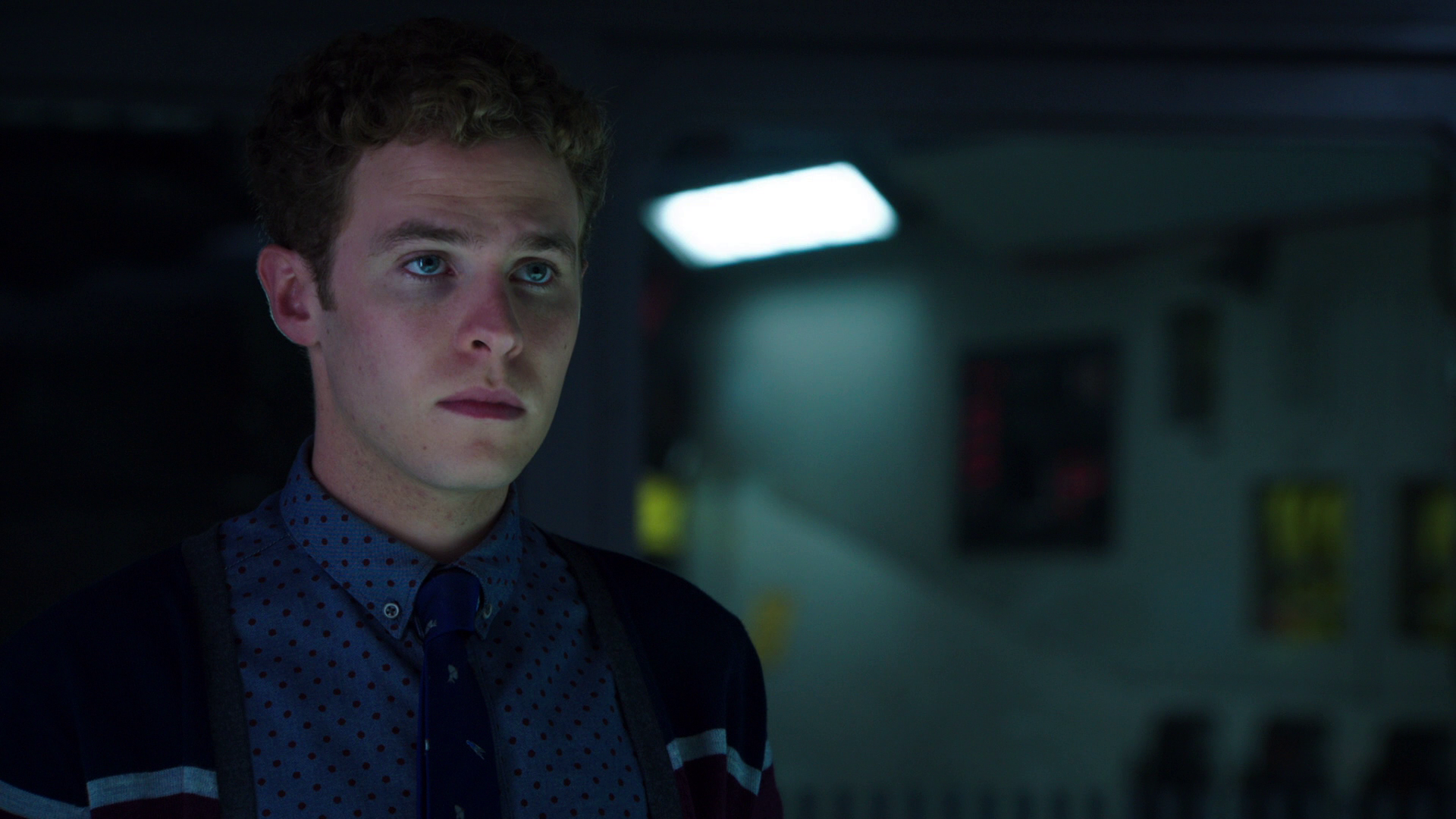 Welcome to Bae Watch Wednesday, where I tell you all about the fictional characters you ought to be crushing on. Sorry not sorry, but I finally caught up on Agents of SHIELD and I’m high key in love with all the characters, so it’s gonna be AoS for awhile. This week is one of my all-time favorite characters: Leo Fitz.

Who is Leo Fitz?

Oh, Leo Fitz. One of the most heartbreaking characters on TV, Leo Fitz is one of the main characters of Marvel’s Agents of SHIELD. He has been an integral part of the main SHIELD team since the first episode, though he’s definitely had his ups and downs, to put it mildly. To be fair, that started well before he joined SHIELD.

Leo Fitz is from Glasgow, Scotland. His childhood was… not great. His father was abusive, constantly deriding Leo and calling him stupid. Then, when Leo was 10, his father left the family. Things actually got better after that. Leo, who now insisted on being called Fitz (as his father had called him his hated first name, Leopold), had an ally in his mother, who encouraged him to succeed.

Fitz did succeed, though it wasn’t always an easy road. Fitz was prodigiously smart, and well ahead of his peers. That made it hard for Fitz to adjust. He graduated school very early, and by 16 had already received a Ph.D., enabling him to enroll in the SHIELD academy.

The academy is where things really got good for Fitz. There, he met Jemma Simmons, another young prodigy (16 years old and two PhDs). Fitz was desperate to make a good impression on Jemma, but in his fear of making a mistake convinced her he hated her. It took some time for them to get on solid footing, but they quickly became inseparable. They were a single unit: FitzSimmons.

After graduating (early) from the SHIELD academy, FitzSimmons went to work for SHIELD Sci-Ops. They invented many useful and fascinating things, but Jemma wanted more. She wanted adventure. So, she convinced Fitz to join Phil Coulson’s mobile operations unit.

Despite not being cleared for field work, FitzSimmons soon saw a lot of it with Coulson’s team. It seems their lives were in danger constantly. Jemma was definitely getting more adventure than she bargained for. But they formed strong bonds with their team and stronger bonds with each other.

Those bonds would be tested when SHIELD fell to Hydra. One of their teammates, Grant Ward, was actually Hydra. Fitz refused to believe Ward was bad and paid a price. Ward captured FitzSimmons and dropped them into the ocean in a medical pod. They were able to escape with their lives, though Fitz tried to sacrifice himself for Jemma, who he was in love with.

Instead of dying, Fitz ended up in a coma and with brain damage. For someone whose identity was wrapped up in his intelligence, being unable to speak was difficult. Worse, Jemma left on an undercover mission to give Fitz some space. He took that as rejection. Over time, and with a lot of hard work, Fitz regained his place on the team, rebooted his brain, and even worked things out with Jemma.

Before FitzSimmons could go on their planned date, however,  Jemma is transported to a distant, hostile planet. Fitz nearly drives himself (and everyone around him) crazy trying to rescue her. No matter what, though, he never gave up. In the end, he rescued her.

Things didn’t get immediately perfect for FitzSimmons. Jemma was traumatized from her experience. She also bonded with Will, an astronaut also marooned on the planet. However, FitzSimmons worked things out and began a romantic relationship. By season 4, they were planning to move in together, both doing good work for SHIELD and trying to keep their team (family) together.

Of course, things can’t keep going well. Fitz worked with Dr. Holden Radcliffe to create AIDA, an android assistant. Radcliffe and AIDA read the Darkhold, an evil book, to save Fitz and Coulson in an emergency, but they are corrupted by the book, and begin to terrorize the team.

Radcliffe kidnaps Fitz and places him into the Framework, a virtual reality. The Framework is far darker than the real world. In the Framework, Fitz is Leopold, second in command at Hydra, who essentially control the world. He is a cruel, vicious man — shaped by his father, who in this reality never left.

Jemma enters the Framework with Daisy Johnson to rescue Fitz and their team, but Fitz does not recognize her and shoots her. When they escape, Fitz is horrified at what he did. The team finally defeat AIDA but must face justice. Before they can, the rest of the team is taken to the future, and Fitz is left to prison.

Fitz escapes prison and figures out a way to join the team in the future: cryofreezing himself for 74 years. He arrives in the future and rescues Jemma and Daisy from a brutal Kree regime. The team make it back to the present but must work to avert the disastrous future they’d seen. Along the way, they take time for FitzSimmons to get married.

Fitz, working overtime to find a solution, suffers a psychotic break and his Framework persona emerges and tortures Daisy. Once again, Fitz is horrified at what he has done. In the end, the team manages to change the future. They succeed through Fitz dying saving civilians in the final battle. Luckily, Jemma remembers that, due to time travel, Fitz is still cryo-frozen in space, and goes to rescue him.

Why Is Leo Fitz Bae?

Listen, Iain de Caestecker is an absolute gift. He is one of the best things to come out of the MCU, and if you don’t agree you can fight me. A lot of that comes down to his acting ability. de Caestecker can outact the best in the business, and he’s had a lot to work with in Leo Fitz.

But, de Caestecker is also a gift for his damn face. He started off the show as super cute, with a baby face, a big smile, and adorable curls. Over the next four seasons, however, de Caestecker matured into an absolute hottie.

It’s unfair how attractive he is, but I do enjoy looking at him. And while I don’t think Jemma is wrong to say she prefers Fitz in cardigans, de Caestecker looks damn good in a suit.

To call Leo Fitz a pretty face, however, would be criminal. There is so much more to this character. Leo Fitz is a genius of the highest order. He has created amazing things for SHIELD. While some of those things haunt Fitz (AIDA, the Framework), Fitz’s work made the world a better place. I mean, in partnership with Jemma, Fitz created SHIELD’s go-to non-lethal weaponry, which allows them to help, not harm.

And Fitz isn’t just a genius, he’s an awkward genius. He’s an unsociable nerd who struggles to make friends. Growing up intelligent means you are often the subject of mockery, so it’s hard to make connections. Watching Fitz become an integral part of the team is a balm to this awkward nerd’s soul, and delightful to watch.

But, of course, Fitz is also utterly tragic. Everything good comes back to haunt him, in some way or another. Fitz’s genius creates the Framework. Then, in the Framework, Fitz sees what he would be capable without his moral compass. Framework!Fitz is truly awful. He has no compassion or hesitation. He tortures Inhumans, and even tortures Daisy, though he doesn’t recognize her as his friend.

Fitz’s relationship with the team also comes back to haunt him. The connection he formed with Ward allowed Ward to hurt him and Jemma. When Fitz is dealing with brain damage, his inability to communicate isolates him, and it hurts to see his friends — his family, really — not know how to deal with him anymore.

When these things interact, it’s the pinnacle of tragedy. Fitz’s brain damage, the result of his friendship with Ward, allows Framework!Fitz to take over. This evil genius then tortures one of Fitz’s closest friends, destroying that relationship for good. Leo Fitz is ultimately a lesson in tragedy.

Leo Fitz is not just a lesson in tragedy, however. No, Leo Fitz is also a study in hope. Nowhere is this seen more than in his relationship with Jemma Simmons, which progresses from a seemingly hopeless crush to marriage. Their relationship is the backbone of AoS.

In season 1, FitzSimmons were just best friends. Yes, they were an inseparable unit, but not more. Over the course of the season, however, Fitz realized his feelings for Jemma. He was afraid to tell her how he felt until it was too late and sacrificed himself to save her.

In season 2, FitzSimmons were separate. Jemma was undercover at Hydra. Fitz was struggling to recover from his injury and return to work. However, they slowly gravitated back to each others’ sides. They could not stay apart. Even when the universe pulls them apart in season 3, they overcome all their trials and stay together. Fitz thinks they are cursed. Jemma thinks they are stronger together.

Season 4 in the Framework really shakes their foundations. But when they got out, Fitz knew he would only love Jemma, and they were meant to be. That’s what inspires Fitz to cryofreeze himself for 74 years — he needed to get back to Jemma. The first thing he does on seeing her is propose, telling her their love is stronger than any curse.

Season 5 breaks Fitz. The stress of trying to break a time loop — which he argues is impossible — reactivates his brain damage. He loses his friends… but not Jemma, who is now his wife. Even Fitz’s death is not the end for them. He is still out in space, waiting to be rescued… which is possible thanks to the spaceship he designed. He gives Jemma hope from beyond the grave.

Leo Fitz has been one of the most compelling characters in Agents of SHIELD from day one. Considering what an amazing ensemble cast the show has, that’s saying something. Among all the heroes — and literal superheroes — of SHIELD, Leo Fitz stands out.

Fitz has been one of my favorite characters from the start, and that hasn’t changed over time (even with the Framework and season 5 stories). He is a character with so much potential. It’s like you turned the saturation way up: he thinks too much and feels too much, does so much.

At his heart, Leo Fitz cares. He doesn’t seem it at first; brainy people usually don’t. But Fitz cares so much about Jemma and his found family in the SHIELD team. He even reluctantly cares about Deke, his erstwhile time-traveling grandson. That makes him vulnerable, and he definitely suffers a lot from his caring. But it also makes him a wonderful character.

No matter what the universe throws at Fitz, he doesn’t let it stop him. Betrayal from a friend leads to brain damage? He powers through, regaining his independence and proving his worth. And later, he realizes he’s better than Ward when he cannot take revenge. Jemma is taken from him? He moves heaven and hell to get her back, then supports her as she readjusts after her trauma.