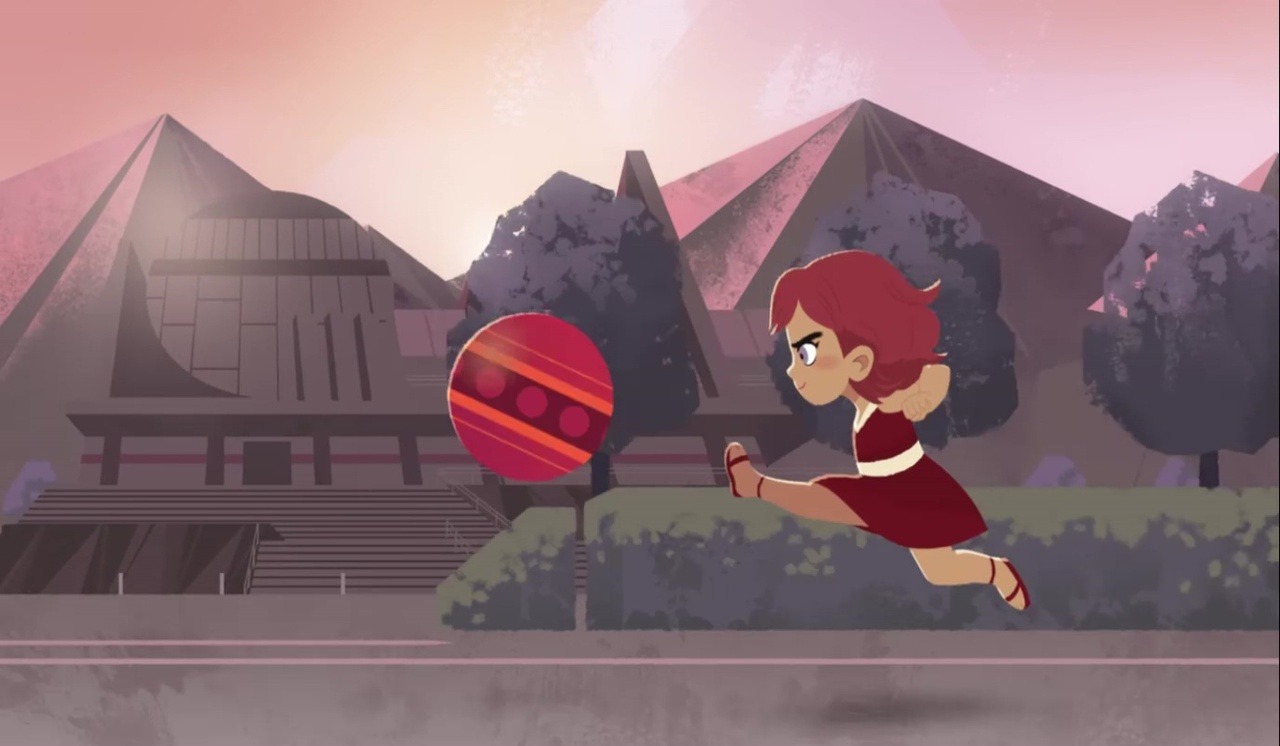 Welcome to Bae Watch Wednesday, where I tell you all about the fictional characters you ought to be crushing on. This week, let’s learn more about the mysterious Carmen Sandiego.

Who Is Carmen Sandiego?

Carmen Sandiego is, funnily enough, the protagonist of the new Netflix series Carmen Sandiego, based on the 1990s media franchise about a globe-trotting person of interest. The new series takes a closer look at Carmen than we had seen before and fleshes out the story behind the mysterious woman in red. The backstory we get in the new show is fascinating. Before she was Carmen Sandiego, she was Black Sheep. Black Sheep was found as a baby in Venezuela by an agent of VILE, a criminal syndicate that operates out of their mysterious hideout on VILE Island. When the agent finds the infant, they bring her back to VILE Island where she is dubbed Black Sheep.

Black Sheep was raised by a group of criminals, but she considers it a decent childhood nonetheless. She has a maternal figure in the coarse Coach Brunt, who Black Sheep assumes found her as a baby. VILE trains generations of petty thieves on the island, so Black Sheep is never alone, and she picks up a lot of tricks along the way.

The only downside is that Black Sheep is confined to the island and has no outside communication. She doesn’t even know where in the world she is, let alone who she is or where she comes from. That starts to change when Black Sheep pulls a prank on VILE bookkeeper Cookie Booker. She escapes trouble due to her golden child status, but more than that, she manages to nick Cookie’s cell phone.

With a doorway to the outside world, Black Sheep begins to learn more. Her phone is targeted by white hat hacker Player, who wants to learn more about the mysterious fellow kid he’s connected with. This is when everything starts to change for Black Sheep.

Tired of being held back, Black Sheep argues that she is old enough to be considered for VILE’s newest group of thief trainees. She demonstrates a high degree of skill, due to being raised by VILE’s top operatives and observing class after class of trainees. Although not all of VILE’s council are in favor of the notion, she is accepted into the newest class.

As a trainee, Black Sheep goes through rigorous classes to hone her skills as a thief. She also finally has a group of comrades to get to know. Not all of her classmates are bosom buddies; she quickly clashes with Sheena, who is dubbed Tigress. But Black Sheep makes a solid friend in Gray, who dubs himself Crackle (yes, he tries to go by Graham Crackle).

Gray was recruited out of Sydney, where he’d shown initiative to rob patrons of the Sydney Opera House using his position as an electrical tech. He’s friendly and personable, and takes a liking to the feisty Black Sheep. He also helps her keep her cool when confronted by Tigress, and puts himself on the line when Black Sheep faces consequences for her pranks for the first time.

It’s not all perfect for Black Sheep, though. In her final exams, she faces humiliation when she fails her pickpocketing exam. She swears up and down that the instructor, Shadowsan, cheated to hold her back. Shadowsan has always disapproved of Black Sheep, and she thinks he is trying to keep her from succeeding. While the rest of her class graduates, she is kept behind. Not to be held down, though, Black Sheep sneaks out and joins the mission in secret, only to realize a terrible truth when she sees her classmates murder a witness: VILE is evil.

Black Sheep is apprehended and brought back to VILE Island, where she is reprimanded and starts her training anew. Now knowing the truth, though, she finds herself unable to go along with VILE. She begins to plan her escape from VILE Island. When Cookie Booker comes to upload new criminal information, she sees her chance.

She accosts Cookie and steals her trademark red trench coat and fedora, as well as the data drive, and begins to make her way off the island, contacting Player for help. She is nearly apprehended, but escapes at the last second on Cookie’s boat. Determined to start a new life, she heads to Canada to meet Player and think about her next move. She also renames herself, as Player points out that Black Sheep won’t look too good on a passport. Going off the label of the fedora, she names herself Carmen Sandiego.

Carmen has a chance at a new life. Thanks to Player’s hacking skills, she could do whatever she wanted. Instead, she devotes herself to taking down VILE and undoing their evil. Faced with the reality of the lies she was raised to believe, Carmen decides that enough is enough. VILE often steals things from various cultures, and Carmen decides to help return those items. Helping her are sibling former thieves Zack and Ivy, and Player, of course.

As the mysterious Carmen Sandiego begins a rush of daring escapades, she attracts the notice of INTERPOL, who begin to chase after her. She’s also chased by VILE, determined to bring her back into the fold (or at least stop her interference). When Gray apprehends her, she defeats him, though she is sad to see her former friend. She continues her mission to undermine VILE, no matter who she leaves in her wake.

Why Is Carmen Sandiego Bae?

Who among us (at least, who among the 90s babies among us) did not think Carmen Sandiego was awesome after playing that PC game? With the iconic red coat and hat, she certainly knew how to make a statement. Carmen Sandiego has also long been a favorite with cosplayers, giving us a view at what a non-animated version of this antihero might look like (and it’s a good look).

The new animation style of the Netflix show is definitely less intense, but Carmen still looks great. Of course the signature coat and hat make their appearance, leading to INTERPOL agent Chase Devineaux dubbing Carmen “la femme rouge.” But there’s a softness to the new Carmen that makes her even more appealing. That new art style is simplistic, but definitely enjoyable.

One of the reasons Carmen Sandiego is interesting is because she’s definitely not your average hero. She doesn’t quite fit into the antihero category, as she lacks the general gruff, angsty (let’s be honest, usually male) qualities of an antihero. But she’s something outside the lines of what we would generally consider a hero.

Carmen is working for good, more or less. She is actively working to stop VILE, which stands for Villains International League of Evil (super subtle). Carmen is the primary antagonist to a group of borderline supervillains, so with “the enemy of my enemy is my friend” logic, she would be a hero. But Carmen isn’t exactly a self-righteous do-gooder who always works on the side of the law. In fact, she is a wanted criminal, hunted by INTERPOL, and the arch nemesis of INTERPOL agent Chase Devineaux (well, in his mind, at least).

That’s what makes Carmen interesting, her resistance to easy labelling. She’s neither hero nor a villain nor an antihero. She’s just one person trying to make the world a better place. And if doing so means living outside the law, so be it. She’s fighting against VILE, sure. But she does so by still stealing. She just steals from VILE now, and returns what they have already stolen to the rightful owners. She also uses VILE funds to give to charity, stealing money from criminals to do better.

It makes sense, of course. Carmen was raised as Black Sheep, the golden child of a criminal syndicate. She never knew anything about the outside world. It makes sense that she wouldn’t exactly respect legal authority. Plus, Carmen was fully ready to be a VILE operative when she thought they were just petty thieves, and only quit when she learned they were murderers, as well.

Mystery In The Making

Another thing that makes Carmen interesting is her air of mystery. A major plot point in the first season is Carmen’s attempts to learn more about her past. We learn about how she became Carmen Sandiego, of course. There is an entire two-part episode full of backstory as she tells Gray how she got to this point. But we don’t know anything else about her, and neither does she.

How did Carmen become Black Sheep? The information she has about her own background is so limited. Growing up, all she knew is that she was found as a baby in Venezuela. She doesn’t know if she is from Venezuela, what happened to her family, or even her own name. She doesn’t even know who found her, just having suspected all her life that it was Coach Brunt, since Brunt was so invested in her childhood.

This mystery lingers throughout the story. While each episode is half amusing caper and half geography lesson, there’s an interesting subplot of Carmen learning as much as she can about her past. This comes to a breaking point in the final episode, where Carmen is finally captured by VILE. Coach Brunt begins to torture Carmen, when unexpected aid comes in the form of Shadowsan, the instructor who had always disapproved of Carmen.

Finally, Carmen learns the truth – or at least, a small part of the truth. Shadowsan was the one who found Carmen and brought her back. He always disapproved because he didn’t like her being raised to work for VILE. Shadowsan did in fact deliberately fail her, but not out of anger; he wanted to save her from a future with VILE. Shadowsan disappears, leaving Carmen with more questions. But it’s a start, and season two should give us some good development.

I was excited to hear about the new Carmen Sandiego, as a 90s kid who grew up following the red hat around the globe. Plus, the buzz I was seeing about it came from blogs I follow for She-Ra content, so I was expecting another powerful female-led show that gives deeper meaning than your typical kids’ show. While Carmen Sandiego is far more obviously a kids’ show than She-Ra, oftentimes feeling a little Dora the Explorer, it’s well worth the watch, mostly because of the amazing protagonist.

Carmen Sandiego is interesting. While the show may get a little too educational at times, the mystery and backstory of Carmen make it far from a boring kids’ show (and some of those scenes are not for kids). It would be easy in a kids’ show to make a bland protagonist. If we’re going with the Dora comparison, why not a bland, happy, cheerful little protagonist? Carmen Sandiego wanted to push that.

This is a  lead character who is not a hero, though she does work to make the world a better place. She’s a particularly skilled thief and a master of deception. She was raised by criminals and supported them until she realized they crossed a line she wouldn’t. Carmen Sandiego isn’t a one note character. She’s a full symphony, with a mysterious backstory to boot.