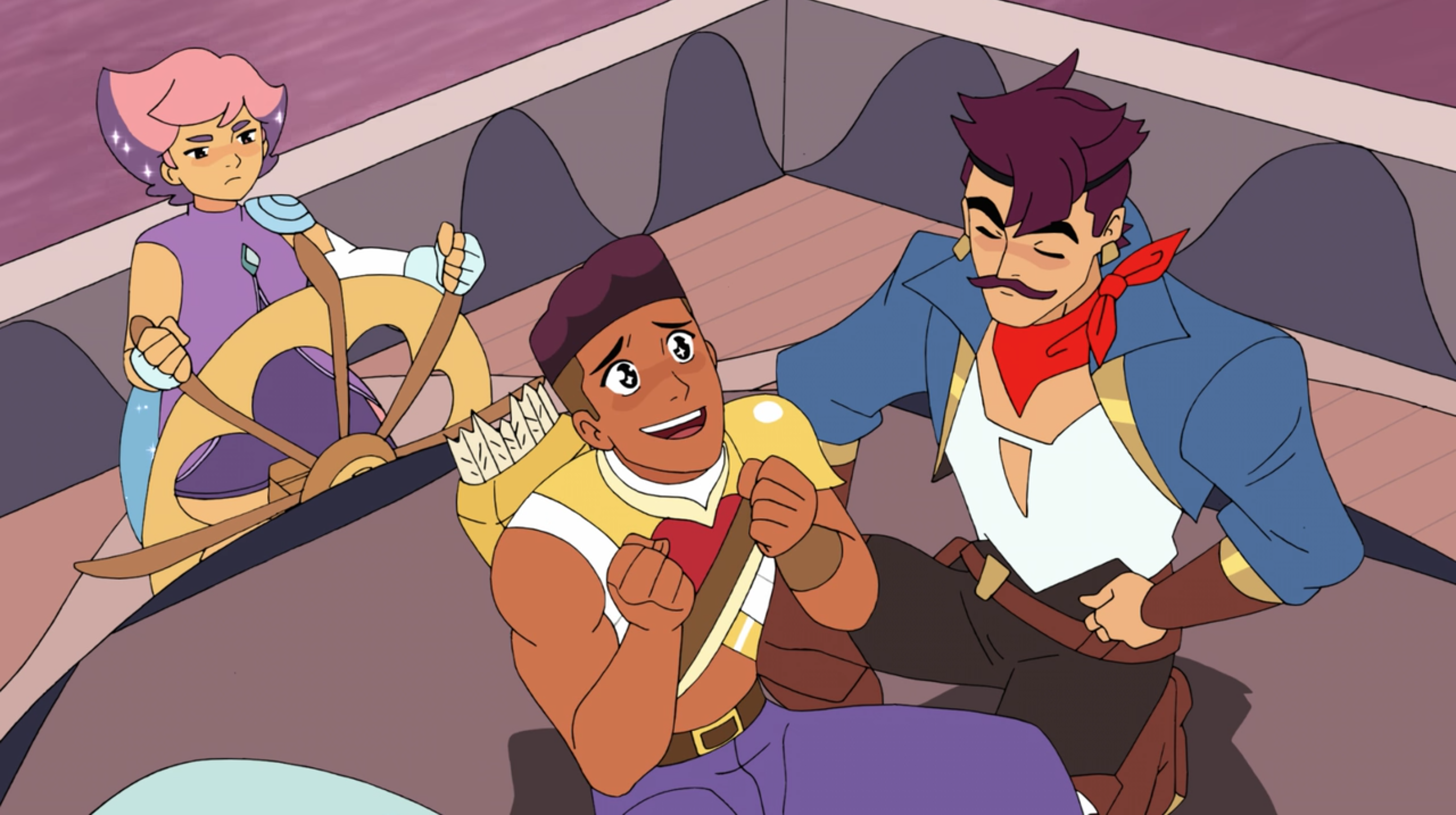 Welcome to Bae Watch Wednesday, where I tell you all about the fictional characters you ought to be crushing on. This week’s bae is my heart and soul, Bow.

Bow is one of the main characters in She-Ra and the Princesses of Power. Although he may not be a princess (though, to be honest, the jury’s out on that one) Bow is an integral part of the Princess Alliance and the show as a whole.

Bow’s best friend Glimmer is the princess of Bright Moon, one of the kingdoms of Etheria and the focal point of the rebellion against the Evil Horde. Glimmer’s mother, Angella, runs the rebellion, and both Glimmer and Bow play a big role in the action against the Horde. Or, at least, they are supposed to; Angella’s desire to protect Glimmer sees them often sidelined.

This doesn’t stop Bow, however. His technical skills help him create a tracker for First Ones technology. Since the First Ones – ancient beings who once lived on Etheria – may be able to help turn the tide, he and Glimmer set out to find the tech and bring it back to Bright Moon, proving to Angella that they are responsible and helpful.

Of course, things don’t quite work out like that. Glimmer and Bow instead run into Adora, a captain of the Horde, in the Whispering Woods. They take her captive, along with a magic sword, and are excited to present their triumph to Angella. Bow tries to talk to Adora, his friendly nature slowly wearing down her walls.

This friendliness leads to Adora helping Bow and Glimmer when they are attacked by a wild creature. A fragile friendship blossoms, expanding when Adora sees the truth of what the Horde is doing. Together with her new friends, Adora turns the tide in a battle and defects to the rebellion. The new “Best Friends Squad,” as Bow dubs them, is going to save Etheria.

Bow learns more about Adora and her life with the Horde. He helps her adjust to the strange new world she finds herself in, as she discovers she is the legendary warrior She-Ra. He supports her when the people of Bright Moon initially balk at accepting a Horde soldier into their midst.

When Angella accepts Adora’s fealty, Bow and Glimmer are excited at their success. They push to continue the momentum. Glimmer wants to restart the Princess Alliance, which had previously brought together all the kingdoms of Etheria to battle the Horde. With She-Ra on their side, it looks like they may be able to sway other kingdoms into joining.

The Best Friends Squad sets out. However, there are a lot of ups and downs along the way. Adora doesn’t know how to be She-Ra, and struggles to find her place. Glimmer and Bow try to support her, but while Glimmer encourages Adora to use her powers, Bow suggests more prudence. He points out that magic doesn’t always save the day; as a non-magical archer, he is still useful.

This shows strongly when the squad goes to recruit Entrapta, a technological genius. Bow is enthralled by the idea of meeting Entrapta, as he considers himself a techie. He builds his own arrows, and though the other two mock him, he knows his skills are worthy. This is proven when he is able to save the day after Entrapta’s inventions put them all in danger.

When the squad goes to Mystacor, where Glimmer’s aunt Castaspella lives, Bow helps smooth the edges. Castaspella is overbearing, but loves Bow, so he is able to make things easier on Glimmer. He is also there for Adora when she seems to have a breakdown, and helps her relax after so many fights.

Things soon take a turn for the worst. At first, it seems like they will catch a break. The All-Princess Ball seems like it will be a good time. However, things first go awry when Bow reveals he will not attend with Glimmer, but is going with Perfuma, the first princess they recruited.

Glimmer doesn’t take this well. Bow tries to brush it off, but it’s clear it bothers him. When the two talk for a moment, they get their wires crossed even more when both assume the other is apologizing. In the end, Bow has some harsh words for Glimmer, and leaves the party.

While on his own, he discovers that the Horde is setting bombs to destroy the palace. He tries to stop them but is captured, which soon leads to Glimmer being captured as well. Catra, the leader of the Horde faction, has identified Bow as a weakness for Adora. He is used in a trap to lure Adora back to the Horde.

In captivity, Bow is separated from Glimmer and put in a cell. He strikes up a conversation with his guard, Kyle, that leads to him being able to distract Kyle and escape when the alliance comes to rescue him. Unfortunately, Entrapta is lost in the battle, and things seem darker than ever for the rebellion. This is made literal when darkness sweeps over Etheria as the Horde unleashes a new weapon.

Things are grim, and Bright Moon is the last haven. The rebellion must defend it with all they can. Bow joins Glimmer and Adora in fighting the Horde. It looks like they may lose the battle, and Bow takes care of Adora when she is ready to give in. In the end, however, they are successful in repelling the Horde.

Why Is Bow Bae?

Bow is (animated) perfection. He is the absolute cutest. A real cutie pie. A cutie patootie, if you will (it’s okay, I’m cringing too). He’s definitely good looking, something other characters notice, and you have to love a man who is that dedicated to wearing crop tops. Someone dressing like a thot no matter the weather is an individual after my own heart.

But Bow’s cuteness is not so much derived from his physical appearance as it is from his energy. Sure, he’s attractive. But, more importantly, he has the biggest energy in the series, and brings so much light and life. He lights up any scene he’s in and brings happiness and joy to any occasion. That is why Bow’s bae.

Bow’s amazing because he’s a multifaceted character. He never feels one note because we’re always learning new things about him. Sure, there are some things that stand out and stay the same: Bow’s a great friend, he’s cheery, and he loves a good crop top.

But over the course of season one, we get to see many different sides of Bow. First is the master archer. His name is on point and he seems to be very skilled with his weapon of choice. It would be easy to write him off as a jock character, someone who has trained extensively in a type of fighting and focuses solely on that.

That’s not who he is, though. We see later that Bow is also a major geek. He designs his own arrows to achieve different effects (buh-bye, Green Arrow) and geeks out about meeting Entrapta, another technological genius. Bow is the only one able to understand Entrapta throughout the show. Most other characters let her ramble or scold her to simplify what she’s saying, but not Bow.

But Bow’s not just a serious soldier who is a master archer and a tech genius, either. We see a fun, lighthearted side of him. He frequently encourages Adora to experience new things, as seen when he convinces Glimmer to let them go to a party. He knows Adora missed out on a lot, living with the Horde, and wants to make it up to her.

Bow’s a social, fun person who likes things lighthearted. He gets thrilled about Princess Prom and loves meeting new people and going to parties. Yet at the same time he’s a master archer, technological genius, and trusted counsel for the rebellion. He’s allowed to be so many different things.

The best thing about Bow is that, despite being multifaceted, he never strays into toxic masculinity territory. So often we see male characters limited to a very narrow idea of masculinity. The gruff, brooding hero out for revenge is a typical sight. But Bow is nothing like that and his version of masculinity is wonderful.

Bow is completely, unabashedly the heart and soul of She-Ra. It’s not even subtle. Catra literally calls him the heart, and easily sees that the way to defeat Adora is to go for her friends. While Glimmer is also captured by the Horde, the show frames Bow as the heart, not Glimmer.

Because, really, Bow is the heart. He literally walks around with hearts plastered all over himself, literally down to the soles of his boots. But he acts like the heart, too. He is the emotional grounding point for the heroes. Glimmer is a moody teenager trying to find her place; Adora’s the hero of legend not sure she can live up to the legend.

But Bow? Bow’s the mom friend. He takes care of Glimmer and Adora when things get to be too much. He helps them unwind and relax. When Adora doesn’t know what a party is, he shows her. When Glimmer is unsure of how to carry on, he shows her. He even lectures them about sword safety and being responsible.

The final episode makes it clear just how much Bow is the heart of She-Ra. When things look bleak, it’s Bow helping Adora that lets her overcome. When the princesses all glow with power as they join forces, Bow’s heart glows along with them, despite him not being a princess. Bow has never heard of toxic masculinity, and it’s magical.

She-Ra has a lot of amazing characters, and everyone loves someone different. I (briefly) joined a She-Ra discord (before getting overwhelmed and leaving) and people were gushing over all different characters. Some people love Adora, some Entrapta, some Scorpia… but everyone loves Bow.

No matter who you are or what your personality is like, everyone loves Bow because it’s impossible not to love him. He brings light and life to a dark world in She-Ra. Etheria is in danger, the Horde is close to defeating the rebellion, the alliances have crumbled, and things look grim. But then my Crop Top Son ™ comes and everything gets a little better.

It’s unclear at the moment if She-Ra and the Princesses of Power will have a second season, although I can’t see them not renewing it. However, if they somehow don’t renew She-Ra, the lack of more Bow will be heartbreaking.

There’s so much more I want to know. Does Bow secretly have magic powers, and is that why he glowed at the end? Will his relationship with Glimmer change after their fight at Princess Prom? Can we please meet Bow’s dads?

Bow is undeniably the heart and soul of She-Ra, and I can’t get enough. A friendly, talented, multifaceted man who kicks toxic masculinity out in the cold? That’s the dream, right there. Especially when you add in the crop tops. Give us more male characters like Bow, television executives. You won’t regret it.