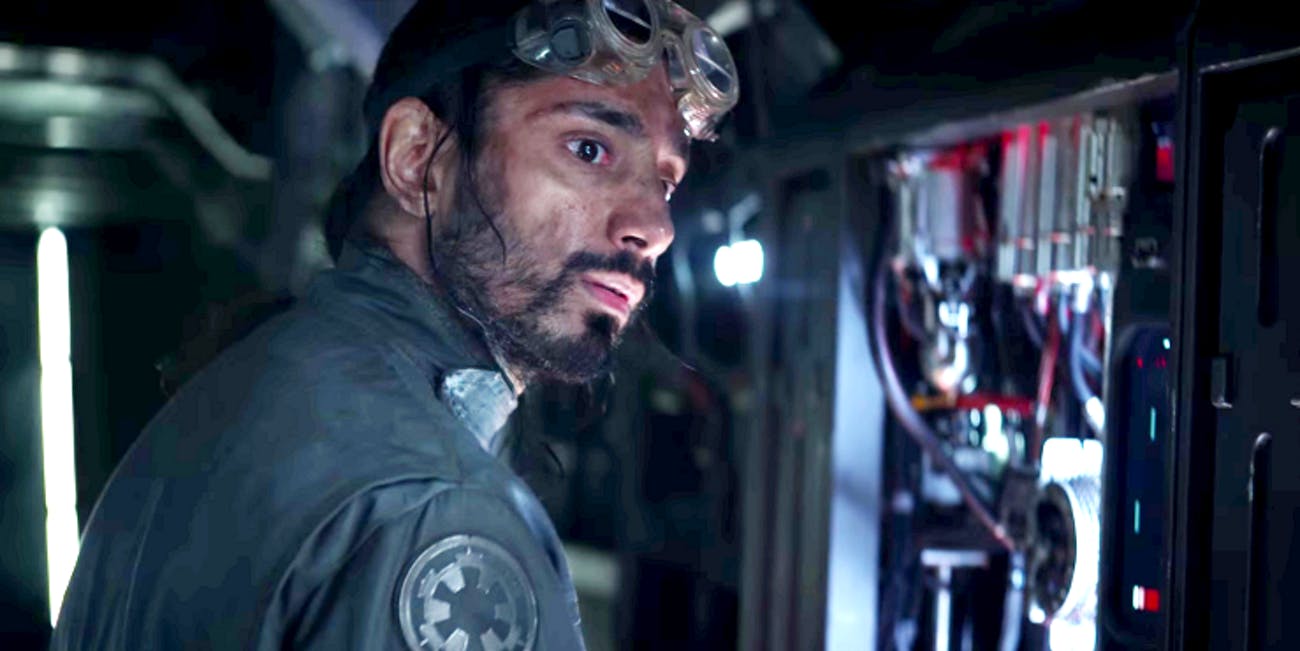 Welcome to Bae Watch Wednesday, where I tell you all about the fictional characters you ought to be crushing on. In honor of The Last Jedi coming out this month, all my December baes will honor my original fandom, Star Wars. This week’s bae is sweet summer child Bodhi Rook.

Who is Bodhi Rook?

It’s been a year since Rogue One premiered as the first stand-alone Star Wars film. Coincidentally, it’s also been a year since Bodhi Rook stole (and subsequently broke) my heart. Although we only got a little Bodhi, he had a big impact on my enjoyment of the movie.

Bodhi Rook is one of the protagonists of Rogue One. Sadly, Rogue One is only one movie, and Bodhi isn’t even the main main character, so I have a lot less to work with than I usually do in Bae Watch — but that won’t stop me from sharing the gospel that is Bodhi Rook.

For all that Bodhi is a minor figure in the Star Wars continuum, he has a major role in the history of that galaxy far, far away. Bodhi is the driving force behind Rogue One. We first meet Bodhi on Jedha, where he is attempting to reach Saw Gerrera to deliver a message from Galen Erso.

Galen has been working with the Empire to develop the Death Star. Being no fan of the Empire, Galen manipulated things so that he built a flaw into the Death Star plans, which would allow the Rebellion to destroy the superweapon. The only catch? He has to inform the Rebellion of their opportunity, and that’s not easy for a top-ranking Imperial scientist.

Enter Bodhi Rook. Bodhi also works for the Empire, as a cargo pilot. He met Galen on Eadu, where Bodhi delivered necessary components for Galen’s work. We don’t see the hows and whys, but somehow Galen convinces Bodhi to defect, giving him a message for Saw. Bodhi is from Jedha, where Saw is currently based, so he heads home, knowing he has burned his last bridge with the Empire.

Unfortunately, Saw is paranoid and fears the Empire finding him. When Bodhi shows up in an Imperial pilot’s uniform, Saw refuses to believe he has defected. He subjects Bodhi to Bor Gullet, a telepathic creature that tortures its victims in an attempt to “learn the truth.” When the rest of Rogue One first meets Bodhi, he is a little ragged — but instantly comes back when he remembers the essential truth: he is The Pilot.

Despite all he has gone through, Bodhi remains strong. He can give Cassian Andor vital intelligence that will help him find Galen Erso. Later, he helps Cassian and his droid K-2SO navigate the storm-torn landscape of Eadu as they attempt to approach the Imperial base without being caught or killed. Bodhi even directly climbs over rocky cliffs to help Cassian reach the ideal vantage point to observe Galen.

After the disaster on Eadu (where Galen is killed, truly severing all Bodhi’s ties to the Empire), Bodhi stands in support of Galen’s daughter, Jyn. Jyn tries to convince the Rebel Council that they can defeat the Death Star by taking the plans from the base at Scarif and identifying her father’s sabotage. Unfortunately, the Rebels back down… but not Bodhi Rook. When Jyn, fierce and full of fire, declares her intent to fight, Bodhi backs her up.

Bodhi then helps Jyn and Cassian hijack a transport and pilots several Rebel soldiers to Scarif. He dubs their ship “Rogue One,” going off their rogue actions. Later, he can bluff his way into Scarif by way of his insider information as a former Imperial pilot. His uniform, which had earlier brought him so much pain, now allows him to manipulate the soldiers on Scarif.

Sadly, Rogue One is as much tragedy as any other genre, and Bodhi Rook is not immune. Although he stays with the ship — to provide an easy escape — he is not out of danger. When the Rebel Fleet shows up, Bodhi must put his life at risk in a desperate attempt to reach them to keep them informed. He is successful, and for a brief, shining moment Bodhi is happy. Then, a grenade comes into the ship, and Bodhi is lost.

Why is Bodhi Rook Bae?

Look, Riz Ahmed is something else. Like, hot damn. The thirst is real, folks. Even with Bodhi’s scraggly facial hair and long, messy hair, Riz Ahmed pushes the attractiveness off the charts. But Bodhi Rook is so much more than a hot piece of… well, you know.

Our first introduction to Bodhi shows him as a very sarcastic individual. He’s being dragged across the sands of Jedha, wearing a hood, on his way to meet Saw Gerrera. But where anyone else might reasonably be terrified out of their minds, Bodhi is chattering away, mouthing off to his captors. Bodhi Rook is on a mission, and poor manners will not deter him.

He even continues his bravado when faced with Saw himself. It does not matter that Saw is a terrifying figure, an extremist and murderer; Bodhi trusts Galen, and Galen sent him to Saw. Sadly, Bodhi (understandably) loses a little of his spark when the Bor Gullet tortures him. But even if he loses his snark, he doesn’t lose what hid underneath the snark — a deeply sensitive, good individual.

Despite working for the Empire, Bodhi Rook is good. He defects because it is the right thing to do because he needs to stop the people who would create a Death Star. Although he is terrified and reeling from torture, he agrees to go back into Imperial territory on a suicide mission to stop them. He has Jyn’s back, even though he just met her.

Bodhi cares, a lot. His last words are for Galen, who pushed him to defect, to make things right. Having successfully reached the Rebel Fleet, Bodhi conveys his last important message — they need to take down the shield gate to receive the transmissions. In his moment of triumph, Bodhi whispers “this is for you, Galen.” It’s the last thing he ever says.

One of my favorite lines in The Last Jedi comes from another bae of mine, Poe Dameron. He says that the surviving Resistance members “are the spark, that will light the fire, that will burn the First Order to the ground.” Well, Bodhi Rook is the spark that started the fire that burned the Empire to the ground.

Bodhi Rook defected from the Empire. Sure, he worked for them for a time. But he chose to defy them, to actively work to stop them. The whole plot of Rogue One occurs because Bodhi decided he would no longer work for these killers. And the entire plot of A New Hope occurs because of Rogue One. If not for Bodhi Rook, we wouldn’t even have Star Wars.

This is a man who would easily be overlooked. He’s quiet, scared, and seems mostly harmless. Because of him, the galaxy was freed. Yes, it took a lot of work, and yes, he wasn’t there for most of it. But it is solely because of his actions that any of this was able to happen.

Jyn and Cassian are great, I love them. They are the driving forces behind Rogue One, they are the people that make it happen — but they only have the opportunity to do so because of Bodhi. If Galen had not sent Bodhi to Saw, Jyn would likely have died in the Wobani Labor Camp. Cassian would not have received the vital intelligence. Bodhi Rook is so, so important, and I think he deserves far more recognition than he gets.

Man, Bodhi Rook is great, and he reflects what makes Star Wars so great. This character appears in the Star Wars universe for less than one movie, yet he has such a massive impact. Bodhi Rook proves that everyone has the potential to create change, even if they themselves don’t think it. We didn’t get much of Bodhi, but what we got proves this man is just the best.

Bodhi Rook is a scared individual. He’s running against the Empire, a massive, powerful government full of people who kill without hesitation, not least Darth Vader. He chooses to stand against them. Others may have chosen to keep their heads down — in fact, Jyn did that very thing and would have continued without Bodhi’s intervention. But Bodhi made things right.

Even aside from his importance, however, Bodhi is just eminently lovable. He’s sarcastic and snarky, something that comes across even more in the novelization. He stands tall even after torture. Rogue One is full of great characters, from Jyn and Cassian to Chirrut Imwe and Baze Malbus. Even among such company, Bodhi Rook stands out.

My only complaint about Bodhi is that he was only here for such a short time. I could have so much more Bodhi Rook and be happy. Oh well — that’s what fanfiction is for!