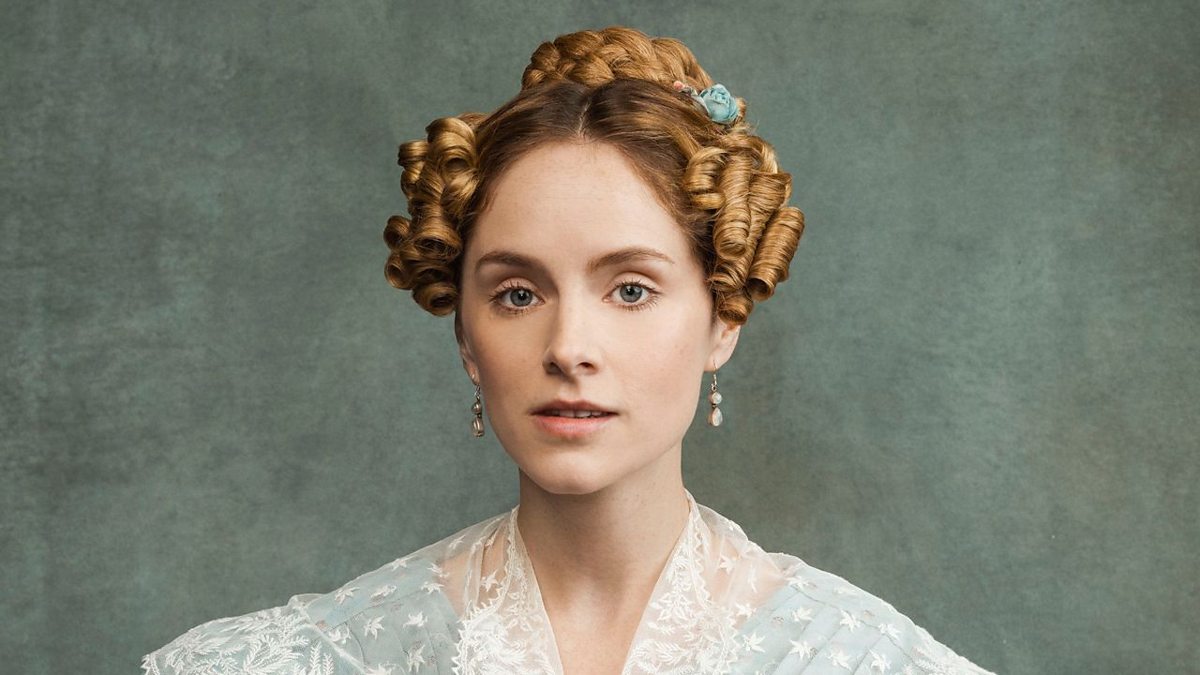 Welcome to Bae Watch Wednesday, where I tell you all about the fictional characters you ought to be crushing on. For June, I want to share some love for queer content out there. Our final Pride month bae is Ann Walker!

Trigger Warning: There is some discussion of sexual assault, self-harm, and mental illness.

Who Is Ann Walker?

Ann Walker is one of the primary characters – and central love interest – of HBO’s Gentleman Jack. Gentleman Jack tells the story of Anne Lister, a landowner and proto-feminist in 1830s England. When Lister, a lesbian, is left heartbroken over another failed romance, she heads home to Shibden Hall in Halifax. She set out to make improvements to Shibden but could do with some extra cash to get everything done. The solution to all Lister’s problems? Ann Walker.

The owner of a nearby Crow Nest, Ann Walker, is a wealthy, single young woman. She has had a rough life in her 29 years. Ann should have been introduced to society when she turned 18, allowed to mingle with her peers and, eventually, presumably, marry. Instead, her world was rocked when her parents died, a short time apart. Instead of socializing, Ann went into deep grieving. Her already delicate nature was shaken, and she became something of an invalid. When Ann’s sister Elizabeth married and moved to Scotland, Ann was left alone at Crow Nest.

A supposedly well-meaning tribe of relatives descends on Ann, determined to take care of her and – especially – protect her from fortune hunters. By the time Gentleman Jack begins, Ann is a dedicated spinster at the age of 29. Her relatives keep her cocooned away from the rest of the world, and she is incredibly sheltered. They regard her as delicate and feeble, unable to make decisions for herself. She is frequently attended to by the Halifax physician, Dr. Kenny, who regards her as having a naturally nervous disposition. Life is safe, but wanting, for Ann. She is simultaneously never alone and completely lonely. Her life is managed for her, not by her. She is a wealthy young woman, but she has no power.

Everything changes when Anne Lister comes back to Halifax after a time abroad. Lister had always captivated Ann, who was in awe of the sheer physicality and energy of the more rambunctious and older Lister. When Ann was grieving shortly after losing her parents, Lister came to visit, as was expected of a neighbor. But it was the first time Ann felt good in a long time, and the visit left an impact on her. So when the two are thrust back together in the same social circle, Ann finds herself enthralled yet again.

Lister begins a determined course of seduction in an attempt to both secure Ann as a lifelong companion and get her hands on Ann’s money. Ann is completely oblivious, in her innocence thinking that Lister is simply as smitten as she is. They spend time together with great frequency, and Ann starts feeling better than she ever has. She and Lister make plans to travel the continent together, despite Ann’s family considering her to delicate to travel. Lister takes Ann to see a doctor friend of hers who specializes in mental health. He proclaims that Lister is the best medicine, and that Ann should be able to live a full life with her.

Once Ann and Lister consummate their relationship, they begin looking to the future. While Lister was drawn by Ann’s money, she is also genuinely looking for a lifelong companion. She asks Ann to move in with her at Shibden. She even suggests a sort of marriage. Though they cannot, obviously, be truly married, they can solemnize their commitment to each other in private. Despite her obvious infatuation, though, Ann won’t commit. And when people start talking about their strange relationship, things spiral from bad to worse, leading to tragedy.

The first issue is that a friend of Ann’s dies, leaving her husband a single man. Ann fears that he wants to marry her, and confides to Lister – after a great deal of angst and persuasion – that he forced himself on her. She worries that this makes her obligated to marry him. Despite Lister supporting her and scaring away the man, Ann is shaken so much by both his reappearance and the loss of her friend that a neighbor, Miss Parkhill, comes to stay with her. Although Miss Parkhill was initially charmed by Lister, after being told that Lister is “unnatural,” Miss Parkhill begs Ann to think of her eternal soul.

The scare tactic works. After being told that two men were recently hanged for their “unnatural” relationship, Ann begins to think she is destined not only for execution, but for an eternity of damnation for the sins she thinks she has committed with Lister. Her paranoia turns to delusions, believing that there are spirits trying to kill her. Although she rejects Lister in an attempt to stay safe, it soon becomes clear that Lister is the only one who can help.

Unfortunately, Ann’s brother-in-law Sutherland insists on her coming to stay with her sister in Scotland, rather than letting Lister take her back to the doctor. Sutherland is trying to trap Ann into marrying his cousin and securing her money. Feeling trapped and without any hope, Ann attempts suicide, though she is thankfully found by her sister in time. Elizabeth, seeing that Ann is desperate, and knowing her husband is a bad man, works with Ann to sneak her out and get her home. There, she runs into Lister. Ann is finally ready to commit to their marriage, and they are reconciled and begin their life together.

Why Is Ann Walker Bae?

Sophie Rundle is perfect as Ann Walker. In high contrast to Suranne Jones’ high-energy depiction of Lister, Rundle brings a delicate sweetness to Ann. Her blonde hair and delicate features work perfectly with the stylings of the time, and the perfectly coiffed curls and frilly dresses of the time make Ann softly feminine, in contrast to Lister’s more masculine energy.

Anne Lister may be the star of Gentleman Jack – the show is based on her extensive diaries, after all – but Ann Walker is the real bae. Lister, after all, is a capitalist, a landlord, and more than a bit superior. She sets out as a standard period piece villain to seduce an innocent maiden for her money. Ann Walker, on the other hand, is genuine, sweet, and kind. She is exactly what you expect from the leading lady of a period piece, down to the delicate constitution and fortune designed to draw fortune hunters.

There is an innocence and a sweetness to Ann that makes her enormously likable. She doesn’t have the harsh edges or underhanded motives of Lister, nor does she have the supercilious nature of her family and neighbors. Instead, she is just sweet and kind. Although Lister initially was in it for the money, she soon found herself falling for Ann in return, enthralled by the pure goodness of the younger woman. Ann softens Lister’s rough edges and makes her think hopefully of a real future together.

Ann’s innocence is most apparent in her developing relationship with Lister. Although she always knew she was captivated by Lister, and always felt repugnance for relationships with men, she didn’t know it was possible for women to love each other. She has a soft gay awakening that shows her a whole new world of possibilities, which she reaches for with both hands. Unfortunately, others take advantage of her softness and convince her that her actions have damned her eternally, and Ann believes truly that she has herself become repugnant and queer for loving Lister. In the end, though, Ann believes that their love is good and right. Lister needs Ann just like Ann needs her, and they belong together.

The nineteenth century wasn’t a good time for women struggling with mental health issues, as they were often written off as hysterical due to their feminine nature (and bodies). Real help was rare, and women were often hidden away or even committed to asylums, to limit shame to the families. The specter lingers over the way Gentleman Jack depicts Ann, but the show still works to give a nuanced portrayal.

At first, Ann seems to be the victim of medical misogyny and the well-meaning condescension of her family. She is “delicate.” An “invalid.” She does seem sensitive, but not excessively so. But slowly, the show reveals that yes, she is suffering from something more. We see her extreme lows in feeling like Lister will grow tired of her, or that she won’t come back when she leaves. When her rapist comes back into her life, Ann shuts down. She seeks treatment. Although the doctor does mention “hysteria,” he is kind and asserts that her suffering is no less real for being inside her head.

Things get really bad when Ann’s illness spirals after being told she will go to hell. Her paranoia becomes religious fixation and delusions of hell. We even see her self-harm, in a horrible scene that really could have used a trigger warning, HBO. At no point was Ann written off for her mental illness. Lister and Ann’s other close companions agree to keep her out of an institution. They try to get her help. They listen and encourage her on her path to recovery. Ann is still not all better by the end of season one. But she is able to take steps toward recovery, and that’s such a powerful thing to see, as someone who struggles with severe mental illness.

Some people may look down on Ann Walker. She certainly is a lot less attention-grabbing than Anne Lister, both by design of the show’s structure and by sheer force of personality. We’re expected to focus on Lister, as the protagonist and pseudo-narrator of Gentleman Jack. More than that, Lister is a more dynamic and forceful character. She could be seen as a symbol of female empowerment, as a landowner in her own right and a fiercely independent woman at a time when independence was rare.

But Ann Walker brings something more to the table, something necessary. She brings gentleness to Gentleman Jack. Ann is a good, soft character at a time when it’s not trendy to be soft. The trend is for strong, badass, unemotional characters, but Ann bucks that trend and reminds viewers that it is okay – it is good – to be kind and gentle. She reminds us that not everyone can be strong and badass, but that that doesn’t make anyone lesser. People are different, and the Ann Walkers of the world are just as important and interesting as the Anne Listers.

Yes, Ann struggles. But she perseveres. Ann overcomes her worst demons and absolutely crushing mental illness to take back control of her own life and her own romance. She shows that recovery is a process, and that things will still be difficult, but that it is possible to recover. After everything she goes through, Ann decides no more. No longer will her family shelter her and make her decisions for her. No longer will she let fear keep her from love. But that doesn’t mean she gets hard and cold. Instead, she remains defiantly soft. It takes courage to be soft in a harsh world, and Ann Walker is bursting with that courage.