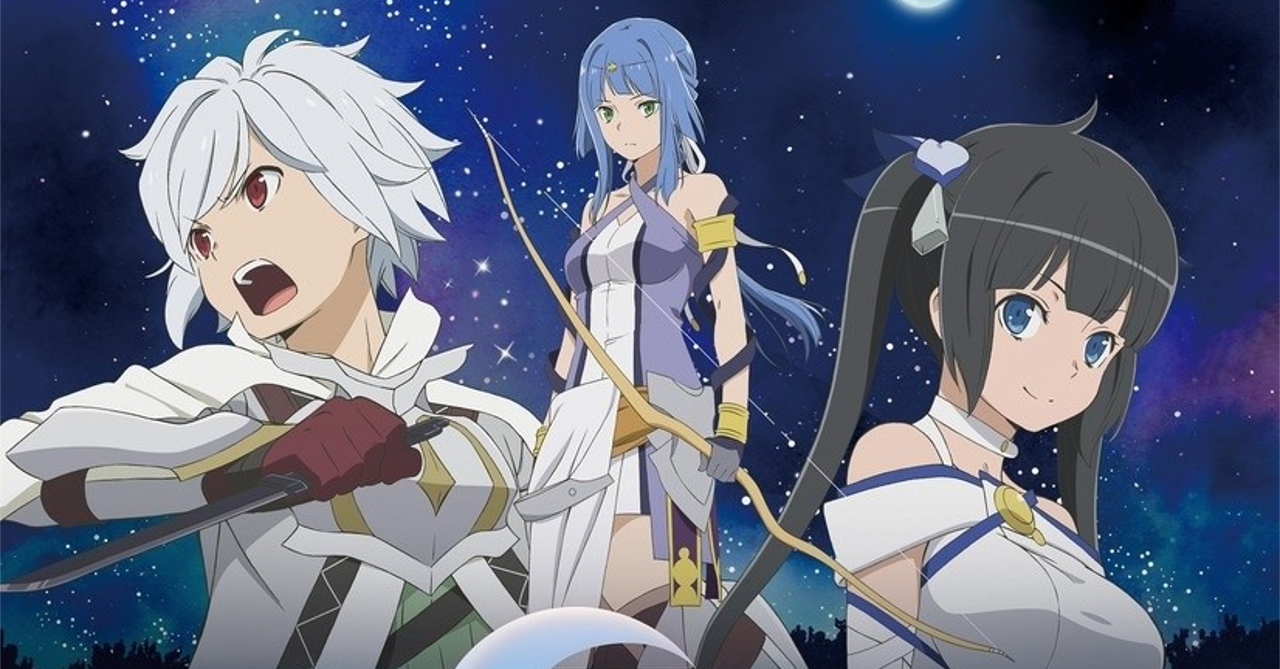 Arrow Of The Orion Heralds A Call To Adventure

Long ago the gods descended to the lower world in search of excitement. Upon their descent, they decided to live in the lower world. In exchange, they would forfeit their godly powers to be burdened by the discomfort and inconvenience of human life. Thus, each god descended with a purpose; some were searching for entertainment and others, for a hero. Is It Wrong To Pick Up Girls In A Dungeon?: Arrow Of The Orion (2019) directed by Katsushi Sakurabi and written by the original creator of the light novel series, Fujino Omori, follows one’s search for redemption.

This alluring fantasy story whisks viewers away. Far beyond the city of Orario, in the Ruins of Ersos, a new monster threat has risen. Goddess Artemis must team up with Bell Cranel and his companions. Together they embark on a journey to fight a lurking evil.

The Journey Continues In The Arrow Of The Orion

In the beginning, Bell quickly developed strong feelings for Ais, which are attributed to the quick rate in which he increases his skills. As a result, he strives to protect others and to impress Ais Wallenstein, the Sword Princess. All of Bell’s adventures have been inside the city of Orario and the dungeon underneath the Babel. Of course, this new quest takes him somewhere new, outside of the city.

The Divine Power Of The Arrow Of The Orion

Every classic adventure story has a hero that inherits a powerful skill. In other instances, a hero acquires a special weapon. Bell has survived his adventures with his Hestia Knife. Unfortunately, this weapon will not be enough to protect him from the perils ahead. The film opens with a gruesome scene at the hands of an unknown evil entity. Consequently, this scene heavily foreshadows the imminent danger of this new threat. Taking down a monster of this magnitude clearly requires an extraordinary weapon.

The story catches up with Bell, his Goddess, Hestia, and party members, Welf and Lili at the city’s Moon Festival. Eventually, their attention becomes focused on the cunning God, Hermes, on a stage. At the center, he is announcing a contest. This contest promises a luxurious prize to anyone who can pull the legendary spear out from the stone. Evidently, Bell and friends observe the commotion. They watch each adventurer’s failed attempts, even by Sword Princess Ais. As a result, Hestia coerces Bell to go on stage to give it a try. Bell grabs the spear and effortlessly releases it from the stone. Much like the legendary King Arthur, Bell was deemed worthy to possess his Excalibur, Arrow Of The Orion.

A journey outside of Bell’s ordinary world lies just on the horizon. Though, as the always popular quote from Ben Parker of Spider-Man goes, with great power comes great responsibility. Of course, Bell is the only one capable of wielding Arrow Of The Orion. He must defeat the reawakened evil that threatens the city of Orario and also the entire lower world.

How Hermes Serves For The Greater Good

In Harry Potter And The Sorcerer’s Stone, nothing could stop Harry from receiving his acceptance letter to Hogwarts School of Witchcraft and Wizardy. Above all, this was Harry’s call to adventure. Bell Cranel’s is Hermes, whose namesake serves as the herald or messenger of the gods in Greek theology. Of course, it is through Hermes that Bell now knows his destiny to carry out Artemis’ quest. Hermes fulfills his role as the herald after setting the adventure in motion.

Afterward, when Bell released Arrow Of The Orion from the stone, Hermes introduced Artemis. In Heaven, Hestia had a close friendship with Artemis. She describes her as the patron of purity and the protector of chastity. Furthermore, Hermes explains Artemis’ arrival is a result of the emergence of a strong monster named Antares. Antares was first discovered and sealed away by the Artemis Familia outside of Orario. In addition, Artemis reveals that Antares can only be slain by Arrow Of The Orion.

Specifically, one of the more notable details about Artemis’ arrival is Hestia’s recurring comments on how she appears to be acting differently. Early on viewers became keenly aware that Hestia was head-over-heels for Bell. She displays possessive behavior any time Artemis or any woman comes in close contact. One could easily deduce that Hestia’s jealousy is at the root of these remarks. While that might be true, it does leave one to wonder what Artemis’ true feelings for Bell are and if she might be hiding something.

A Movie That Adventurers Will Love To Explore

To summarize, Is It Wrong To Pick Up Girls In A Dungeon?: Arrow Of The Orion brings the same charming qualities from the manga and animated series. Light humor, fun relationships, and an eye-catching animation style are just a few of the qualities. Additionally, it is a self-contained story modeled after the hero’s journey in the lower world universe. The movie offers viewers a chance to see Bell equipped with the powerful Arrow Of The Orion. Above all, the Goddess Artemis is introduced with a mysterious secret. Of course, there is no greater call for adventure with Bell as the chosen hero.

My only comment on the movie is that there is a dance scene between Bell and Artemis that feels awkward and out of place for Bell’s character. While the scene adds depth to the narrative, bringing Bell and Artemis closer, it can confuse fans. In spite of this, the movie would have had the same impact without this scene. Furthermore, this movie is a great addition to anyone’s watch-list. In the meantime, the movie can help tide over fans anxiously awaiting the release of the remainder of the episode of, Is It Wrong To Pick Up Girls In A Dungeon? season two.

The movie will be available in select theaters on Monday, July 29, 2019. As of the movie’s theater debut only episodes, one through three will have aired. All episodes of season one are available on Crunchyroll and Hulu.