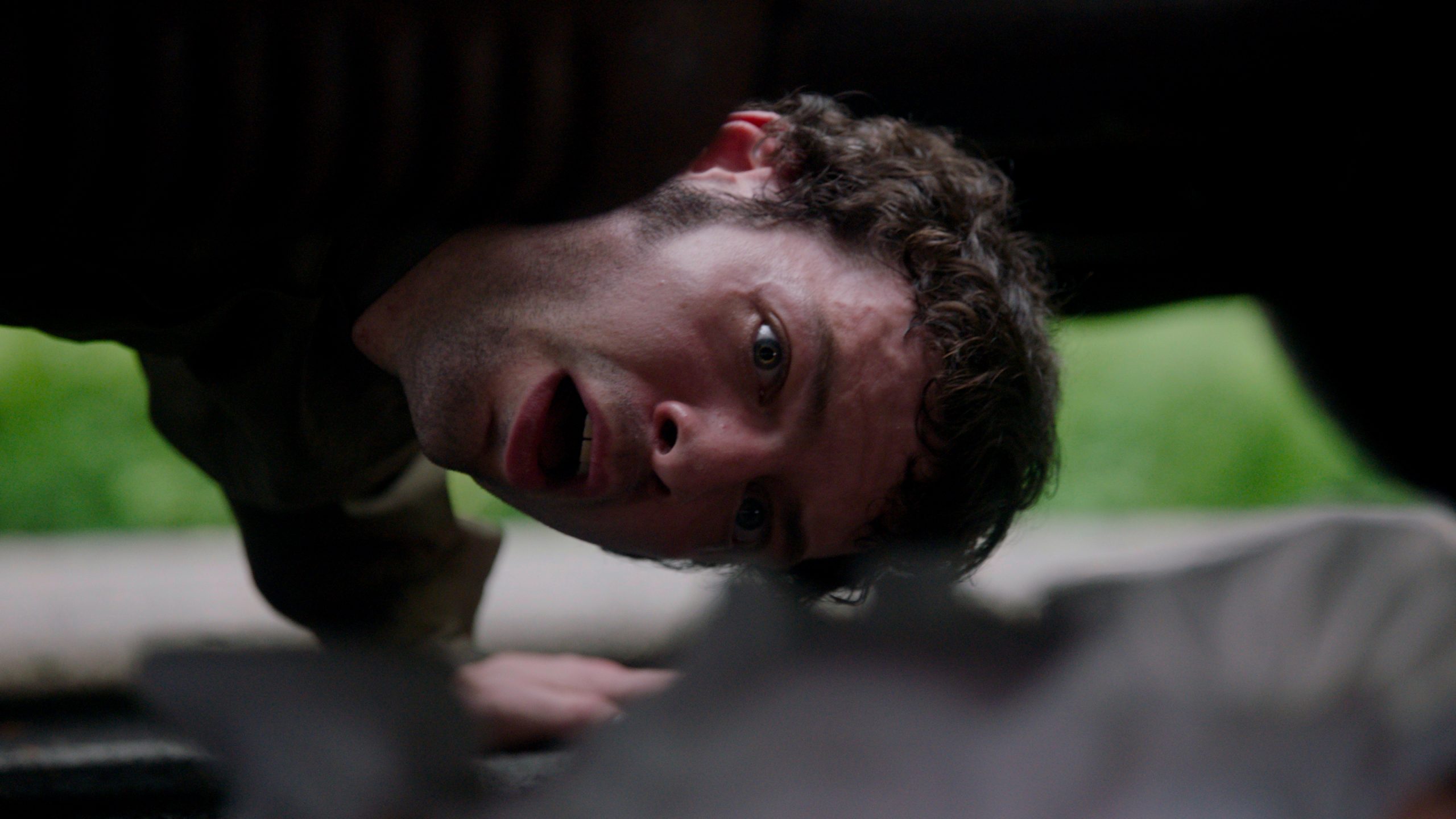 Are You Ready To Meet Your Online Love In Emily Wilson’s DANNY’S GIRL?

Are You Ready To Meet Your Online Love In Emily Wilson’s DANNY’S GIRL?
4.6
I WISH THAT I HAD DANNY'S GIRL?

DANNY’S GIRL written/directed by Emily Wilson; cinematography by Hunter Zimny; produced by Evan Husney; starring: Danny Dikel and Rémy Bennett. DANNY’S GIRL will have its World Premiere in the ‘Midnight Shorts Program’ at the 2020 Sundance Film Festival. This is a 13-minute short film; DANNY’S GIRL will screen at the following dates and times at Sundance:

This will be as non-spoiler as it can be. I won’t say what the thing is, but I will talk about the premise of the film, the shots, and the overall narrative of it.

What Is DANNY’S GIRL About?

Danny and Cleo are finally deciding to meet in person for the first time. After a long-winded relationship online, Danny is getting ready for the big reveal. Unbeknownst to Cleo, however, Danny finds something… interesting in her luggage. As they arrive at Danny’s house and settle in, Cleo starts to realize that Danny has found the thing. When she does, the night escalates into a nightmarish comedy of errors. Through the chaos, their mutual vulnerability and passion to connect pierces through and changes their lives forever.

When you first begin watching Danny’s Girl, the shots are fascinating. The film comes off as a horror-esque movie, the red hues, the camera angles, the obsession with zooming into the girl’s picture — it all comes off as a start to a horror movie. (Which it could be, I guess you guys can decide if it is or not.) It might not help that Danny is, in and of himself, an awkward human being. He comes off as awkward, which places the scene for something completely opposite of what you get. Trust me, the thing that he finds would make one incredibly awkward. At the very beginning, though, you expect the girl to be a catfish or Danny to be a catfish, but they are exactly who they say they are, which makes for a weird situation.

The awkwardness is so awkward that you’re awkward while watching, but imagine how awkward it would be in real life? Wilson truly encompasses the awkwardness within each character and situation. Since this is a short film, what we get about these characters is through the angles of the camera, the events and how they react, and most importantly various objects in the background of the shots. The use of the camera, a quick shout out to Hunter Zimny, was compelling. At first, the shot placements (panning to close-up to wide shot) were jarring. Taking in the premise, it made sense; before you know what is happening, the camera angles set the scene for what is to come.

“The Use Of The Camera” In DANNY’S GIRL

There are various shots throughout this short film that are interesting from the filmmaker. You have, in the beginning, a panning shot of Cleo, a classic shot that pans from her legs to her face as it reveals who she is. Abruptly, however, it switches to a wide shot with the title card, an unusual choice of camera angle within these few seconds. Another shot is when they are getting into the car, you have a long shot because the car is in the scene when they get into it, then a transition to close-up shot with the camera going back and forth between each character with little to no transition in between.

I don’t know if this was on purpose, but the choice of shots makes the film all the more awkward. Since the shots are interesting choices, the camera creates the theme, and the camera does do a great job of creating it within this short film. Specifically, using red and blue hues towards the climax and beginning was a grand choice in colors. There are shots that are blurred and encompassed in blue, the cinematography is quite outstanding for a short film like this. The camera truly made the actors inviting enough to warrant an emotional response.

Both Danny Dikel and Rémy Bennett are incredibly in-tune with their characters. Of course, in moments, they can be a bit too awkward to the point where it was more cringe than inviting. Overall, however, they did a fantastic job with the characters. Danny, who is supposed to be this awkward and unusually nervous guy, is that way within his character. Cleo, who is moving around the most inconvenient thing of all time, remains a bit… off, the entire short film.

You know something has to be coming because she’s off the majority of the film. Danny is awkward, but that is who he is; Cleo, however, is rigidly misplaced. Which is what her character is supposed to reveal since the way it ends is quite beyond what I thought it would end like. I thought the actors did a fantastic job with a two-person film since they held the film together, they kept me interested in what would happen next. Amongst the two, I thought Danny’s exhibited that awkwardness entirely too well. Perfect choice for the role.

An Interview With Emily Wilson

The Daily Fandom: First and foremost, where did the idea come about for this short film? In such a small amount of time, you always have to leave aspects out in the writing room — was there anything you had to leave out? Did you have to cut a lot during the process of creating this short film?

Emily Wilson: My friend was in a long-distance relationship at the time, and one that started by means of an online app, so that was the initial spark for the idea. I had also just come off of working on a documentary series that explored themes of feminine grief and frustration, so that helped inform the character of Cleo and her predicament. That, and just wanting to make a film that had humor and heart. But it was also super fun to develop and make.

In terms of cutting things out, I gave myself a fair amount of restrictions while writing the screenplay, and tried to make it as tight as possible from the beginning. Also, since I’ve spent a lot of time as an editor, I feel like my brain is wired to only include what is absolutely necessary. So I didn’t trim much from the script, but I did make the decision to cut a fairly big scene from the final edit. The film moved better without it, so away it went!

The Characters Of DANNY’S GIRL

The Daily Fandom: Did you always envision Danny to be an uncomfortable character? Meaning, did you envision him to look like Danny Dikel (who plays him?) As well as his counterpart? How did the process go to find the perfect characters for a role such as this?

Wilson: Yes, I absolutely envisioned Danny to be an uncomfortable character – sort of an oddball with little control over his bodily behavior. I wrote the part for my friend Danny Dikel, so I tried to play up his pre-existing strengths as I was developing the character. Of course, the character of Danny is much more awkward and heightened than the real Danny. We gave the character a sort of subtly bizarre outfit and a bad haircut to really bring out the awkwardness in a visual way.

And with Cleo, I wanted an actor who had a sweetness and vulnerability to her. But who could hold her own, carry a scene, and not just react to Danny’s character. Visually, Cleo’s character is seemingly more conventional but we come to learn that’s not necessarily true.

The Cinematography In DANNY’S GIRL

The Daily Fandom: As someone who is studying film, I am always intrigued about the process of directing/cinematography. Did you help with the ideas that came to the surface or did you let Zimny take the reins and create the color palette and shots that we see throughout DANNY’S GIRL? I mention when, in reference to the film, the striking shots that took place. The beginning sequence was one that stood out, the panning shot from Cleo’s legs and Danny’s reaction, then the title card shortly after abruptly. What made these shots stand out and work within the narrative of the film?

Wilson: I storyboarded and shotlisted the entire film, and really took my time diving into how I wanted to visually explore each scene. Once I felt good about that, I then met with Hunter to discuss every shot so we could brainstorm together, change anything that wasn’t working, and riff on ideas together. He had so many great ideas, including the tilt-up from Cleo’s legs you mentioned. We also discussed influences and referenced films we thought had a cool tone or approach to cinematography. I then let Hunter take the reigns on set, and he did an incredible job. He had such strong, inventive ideas and was a true pro directing his department.

The Color Was Symbolic

The Daily Fandom: Bouncing from the previous question, I mentioned it a tiny bit, but how did the color scheme come about? The dark hues (reds and greens) fascinated me so much while watching, I thought they were a very deliberate feature throughout the film that set the tone for what was to come. Was it deliberate to showcase the tone of the scene with the lighting?

Wilson: While brainstorming set design ideas for Danny’s home, I decided that he was the type of guy who would own a lizard. This did two things. Firstly, a guy who owns a lizard is a very specific type of guy. So it’s a nice glimpse into Danny’s headspace. Secondly, a lizard tank has an incredible red/orange glow! It’s a great, fun use of practical lighting. It’s stylish but motivated. And the lizard itself is green, so the green lighting was in part inspired by the lizard itself.

The Daily Fandom: I know I asked the question about the idea and where the premise came about, but I have to ask if the short film was written with the idea in mind that the thing found in the luggage was going to be that. Since we left our conversation about it non-spoiler, I still had to ask. It was such an awkward thing to find and even I would not know what to do in that situation.

Wilson: It’s definitely awkward, to say the least! But yes, it was always the plan to have “that” in the box. I could elaborate on how exactly I came up with the idea, but I’ll keep it a secret for now.