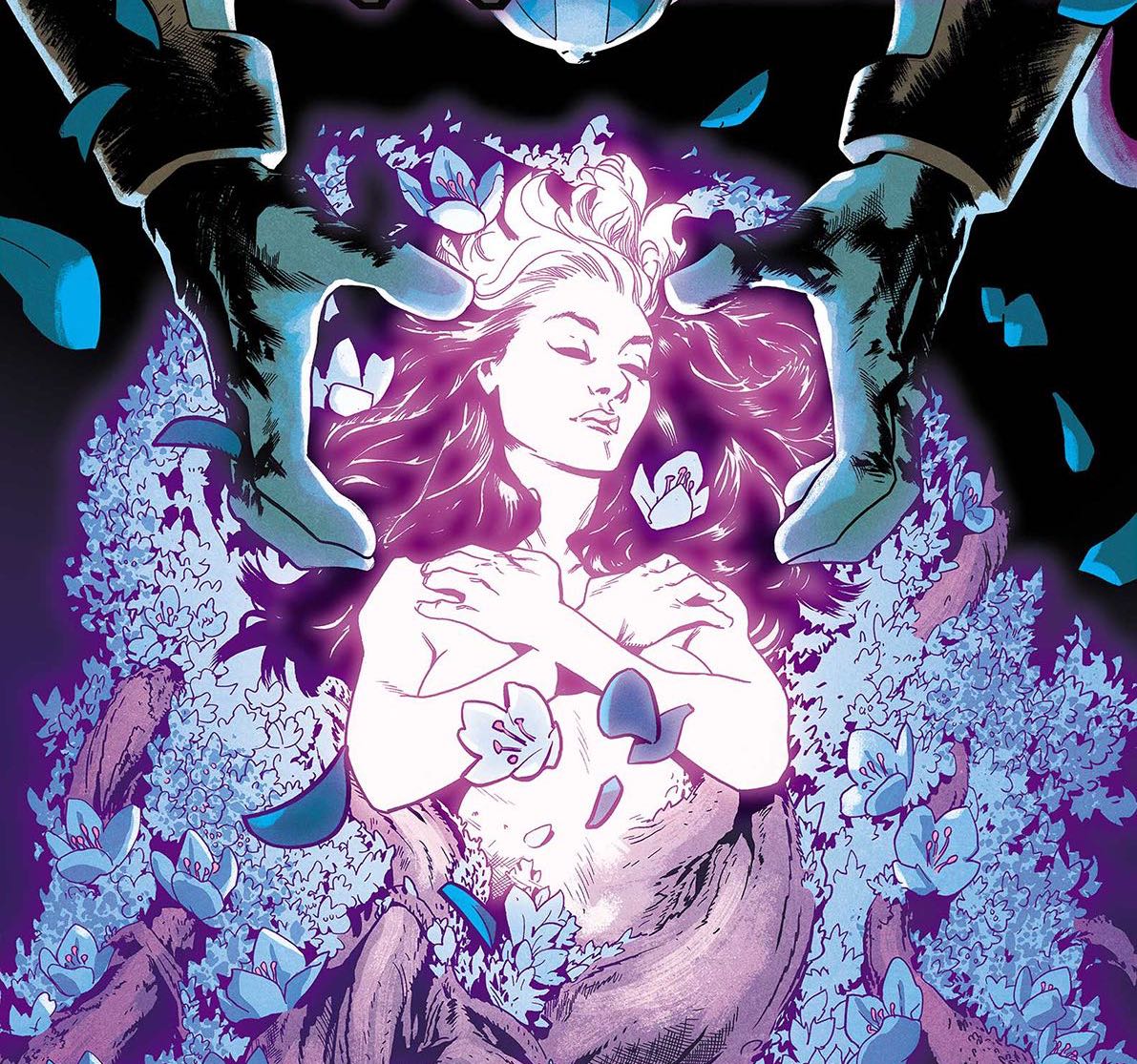 Apocalypse Tips His Hand In Excalibur #5

Marvel‘s mutant magic book ups the ante in Excalibur #5. The team is coming apart at the seams and every page is filled with tension, in this tale from writer Tini Howard at the helm, Marcus To on art, Erick Arciniega on colors, VC’s Cory Petit lettering, and as always on the X-books, design artist Tom Muller. Mahmud Asrar is providing fantastic cover as well.

This series distinguishes itself from the other X-books by putting its focus on magic and the arcane aspects of the X-books, and Excalibur #5 is no exception. Everything is going to hell as Apocalypse calls the team back to their base, the lighthouse, to defend it. Gambit reluctantly obliges, but not for Apocalypse. Gambit is only in this for his wife, who lies in a deep sleep that she’s been stuck in for several issues.

Panic In The Streets Of London In Excalibur #5

Tini finally answers the age-old question of whether or not Gambit and Rictor are fans of The Smiths: They are. Meanwhile, the new Captain Britain races through the streets with Pete Wisdom. Among the pandemonium spilling over from Otherworld, she drops him off at his house before regrouping with the team at the lighthouse. The action is only escalating in Excalibur #5 from the last few issues.

With the team fighting together against the onslaught from Otherworld, Apocalypse revealed a few his plans. As Gambit suspected from the start, Apocalypse put Rogue to sleep. Gambit’s desperation to thwart Apocalypse at every turn finally comes to a head, as he reveals he sent Rachel Grey into Rogue’s mind to help her.

Apocalypse is a schemer, the schemiest schemer perhaps, or at least second only to Sinister. He does nothing without purpose and has reasons even his peers couldn’t hope to understand or predict. Very rarely in history has Apocalypse played the role of hero or even someone that isn’t a villain. Having this newfound place of prominence that mutants have found in the world, it only makes sense that he would be looking for ways to assert his own dominance, but from the inside.

I love Gambit, he’s one of my favorite mutants, and yet this sight of him getting beat into the ground is oddly satisfying. There’s an amazing blend of characters in Excalibur #5 that lend to some really great moments. Having the sworn enemy of the X-men lead this team, in his mind, is such a fun idea. Having someone like him, who’s a ticking time bomb, just has you waiting for the other shoe to drop and it is dropping hard now.

Excalibur #5 is Rogue’s issue and I am absolutely here for it. She’s had the misfortune of sitting out most of the series so far, but Gambit’s meddling in Apocalypse’s plans have awakened the sleeping beauty. Gambit asked Rachel Grey to see what could be done about waking Rogue and the result is a beautiful page where the colors especially are just stunningly vibrant and beautiful.

This book is bent on making up for the lack of Rogue so far and it does it excellently. She is sadly a character that hasn’t had a lot of play in the X-books in recent memory. The best X-men are women. I know it, you know it, we all know it. This page is magnificent. I cannot exaggerate the perfection of these panels and the energy they exude. You can feel the power coming off the page. Everyone, please tell the creators how good they are at making this comic so we keep getting more.

Why Is Excalibur #5 Worth Your Time?

If there’s one downfall to the current line of X-books, it’s the lack of diversity among the creative teams. Tini is the only woman writing on any of these and she’s kicking all sorts of ass, proving why it’s a shame there aren’t more women involved in this line. That being said, the level of detail and creativity she puts into the data pages alone is insane.

You can feel just how much she enjoys coming up with this. Marcus is putting out incredible art on this series, with powerful linework and bold images that emanate strength. Any panel we see Betsy in is a gift that I cherish, as her Captain Britain suit is nothing short of legendary. The colors compliment and raise the bar on the pencils at every juncture in Excalibur #5.

Apocalypse Tips His Hand In Excalibur #5
PROS
Magic books are always cool
Tini was born to write this book
Betsy as Captain Britain was an inspired choice. Worth the price of admission alone
This is the most interesting Apocalypse has maybe ever been
CONS
There's still not quite enough Jubilee
89
POOR GAMBIT 🙁