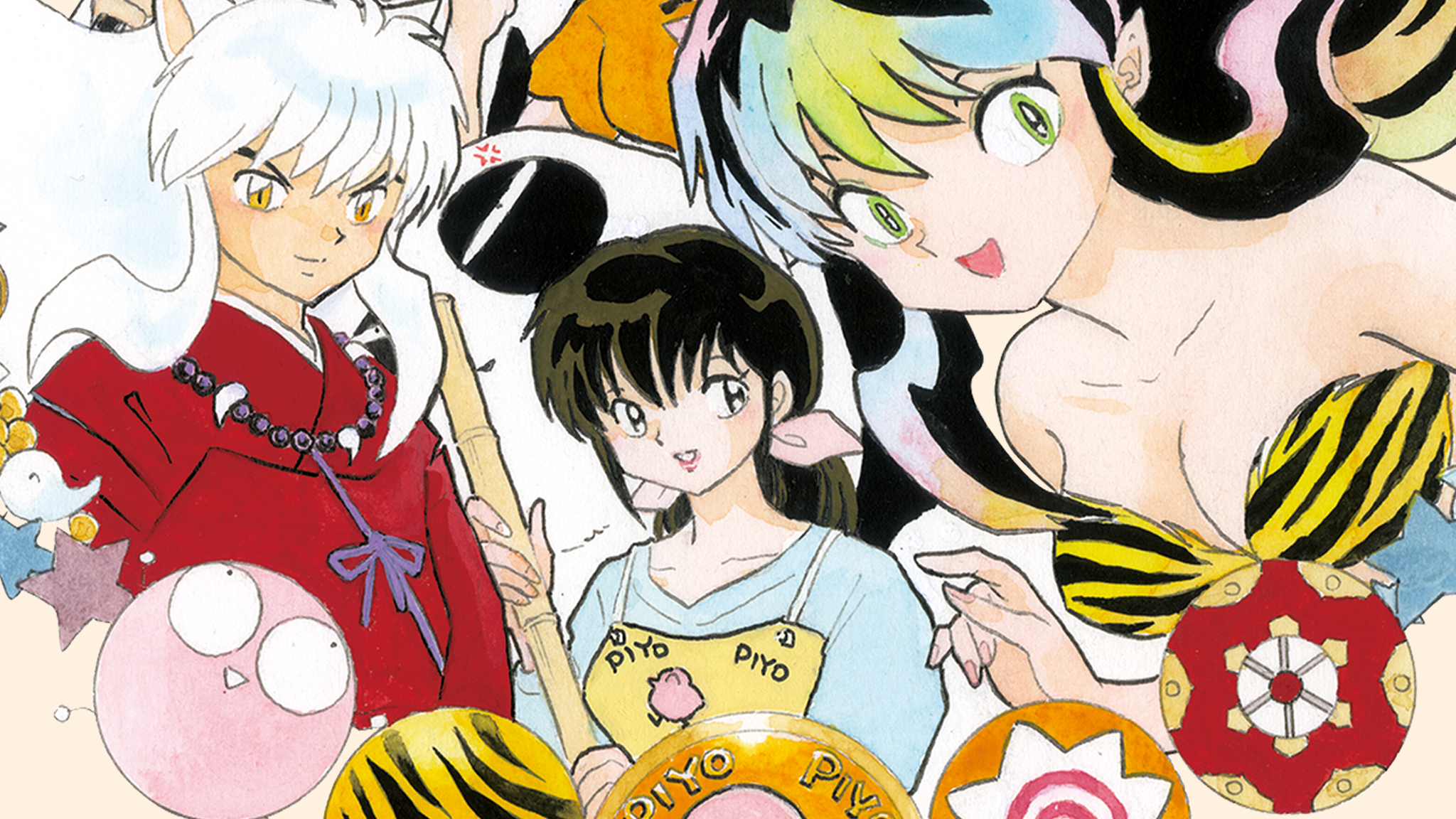 An Apology Is Owed, Rumiko Takahashi

Rumiko Takahashi’s storied career was only recently celebrated with her admittance to the Eisner Hall of Fame. Many of her long-term fans see this as too-little-too-late for such a legendary cartoonist. She has set the standard for shoujo (girls’) manga since the 1970s. Her energetic characters and rich settings got entire generations of girls around the world interested in manga. Even Scott Pilgrim author Bryan Lee O’Malley crets Rumiko Takahashi as an early influence. I don’t think it’s controversial to say that we, as a society, have a lot of hatred in our hearts for teenage girls.

We mock their media relentlessly, parody their fashions, and make insensitive jokes at their expense. It’s hard enough being a teenager without monitoring your every action to make sure you’re not acting like one of those girls. Relatively weird teen girls, like I was, find a lot of comfort in stories that are also relatively weird. For me, those stories came from anime, and Inuyasha was a personal favorite. But even teen girls are especially harsh on one another and the media they consume.

My Introduction To Rumiko Takahashi

Let me set a scene for you: I’m fourteen years old, staying the night at a friend’s house. We’re watching our favorite anime, Inuyasha. I’ve got the first ten collected issues of the manga, three of my favorite episodes on my iPod, and a binder full of fan art. But there’s one thing we both agree on. No matter how much we love the show, we both hate the protagonist, Kagome Higurashi.

We hate nearly everything about her. We hate her short skirt, that fact that she never puts her hair in a ponytail, and how every male character falls head over heels in love with her. Furthermore, she’s powerful, intelligent, and emotional. Isn’t that a mary-sue? Why is she such a scaredy-cat if she’s so perfect?

A Note On Girlhood

Teen girls get so many mixed messages about femininity. While many girls embrace pink and skirts and the like, there’s always the group of dissidents. Girls like me, who wouldn’t be caught dead in a dress. I even denied my love of Sailor Moon for a long time, telling myself that I was allowed to like it because it’s not that girly. It’s anime, after all! As a result, I surrounded myself with people who were similarly denying their femininity.

Because we didn’t read Twilight, because we weren’t boy crazy, we were inherently better than other girls. Of course, there’s no wrong or bad way to be a girl. There’s nothing wrong with preferring a wish-fulfillment princess story to an action-packed anime. The division between Boy Things and Girl Things doesn’t just harm gender relations between genders but among them. It sometimes seems like girls will go out of their way to consume media they don’t necessarily enjoy just so they won’t be lumped in with the rest of the pack.

And that’s where Rumiko Takahashi comes in.

There’s no doubt that Takahashi is a shoujo writer. All of her works feature a heavy emphasis on romance and comedy, with delicate watercolor work interspersing the pages. Despite this, her work has a wide appeal to boys and girls of all persuasions. This is partially due to the unique brand of femininity that she embeds into her characters.

One Pound Gospel stars a boxer and a nun. The female protagonist, Sister Angela, is a love interest that a young girl could be very invested in. Being a sexually maturing teen is like being in a perpetual state of noncommittal relationship limbo. While a teen may be old enough to know that they’re interested in intimate relationships, they’re still too inexperienced to confidently act on their desires. Therefore, Angela the pursued nun could be an easy character to relate to.

Male protagonist Hatanaka proclaims his love for her often, but she is unable to return his feelings. Because she’s, you know, a nun. Sister Angela is very easy to project onto as a reader. Imagine yourself as a young girl who knows that she wants to kiss boys, but feels guilty for it. Imagining yourself as a character who has a strict rule forbidding her to do so can be freeing. Ranma 1/2 also features a noncommittally feminine heroine in the form of Akane Tendo, one of my personal favorites.

While she presents as tough and no-nonsense, she’s really a hopeless romantic. Akane proclaims throughout the series that she hates boys, only to find herself falling in love with her arranged fiancé, Ranma. Again, for a rough and tumble tomboy coming to terms with her own sexuality, Akane is a perfect character to latch on to.

Furthermore, Takahashi’s comics rarely limit themselves to one main character. Instead, Rumiko Takahashi’s work frequently features a boy and girl as a duo of protagonists. In this way, girl readers can see themselves as equal to their boy counterparts. In an industry inundated with stories like One Piece, where girls rarely take on any villain more important than a minor lackey, this is a subtle but important message to send. (No shade on One Piece, Nami is my wife for life.)

Let’s go back to Ranma 1/2, where the dual protagonist is taken to a new extreme. Ranma and Akane are the male and female lead, but there’s another girl in the picture. And she’s Ranma, too! If you’ve been living under a rock and don’t know the plot of Ranma 1/2, it goes like this: Ranma and Akane are engaged by their parents, who both own big dojos and hope to combine their legacies. It takes place in the 80’s, so neither party is interested. Meanwhile, Ranma has been cursed to turn into a girl whenever he is splashed with cold water, and turns back with hot water.

Ranma’s gender-bending is the manga’s prime gimmick. Many other characters can transform, mostly into animals, but Ranma’s girl form is one of the most enduring characters from the original run. Femme Ranma is almost a foil to Akane. She’s flirty, obnoxious, and quick to anger. She’s everything you would expect from a teenage boy in a girl’s body.

So now we get back to the start. Why did I hate Kagome so much? And was it warranted? To start off with, no. My hatred of Kagome Higurashi as a teenager was absolutely misplaced insecurity about my own femininity. I’m sure fourteen year-old me would hate to hear it, but she was probably a little jealous of a character who was comfortable enough with her legs to wear skirts out and about. Let’s look at Inuyasha a bit closer, using the two aspects of Takahashi’s work that I described earlier.

Looking back, Kagome is kind of a stone-cold badass. She exists in that noncommittal zone I described earlier, between feminine and tomboyish. She’s in her school uniform the entire time, representative of her femininity and youth. Throughout the series she’s shown to be easily scared. But she’s sassy, competent, and a crack shot with a bow. And she doesn’t start out that way! A big part of Kagome’s arc is learning to trust herself and maturing as a person while she goes on her feudal era quest. But are picky teens going to see that? I would say that when you’re trained to view anything feminine as the enemy, seeing a character who even shows an inkling of feminine fear is an immediate turn-off.

Even further down the futch scale is Sango, my personal favorite at the time. She’s powerful, revenge-driven, and intelligent. Everything Kagome has to learn to be. But she’s still feminine. Sango wears pink and dresses and grows her hair out long. So why was I willing to forgive Sango for her girly attributes, but not Kagome? Maybe shounen manga trained me too well. The only valuable girls were the ones who could fight for themselves from the start.

Inuyasha and Kagome’s relationship is one of the most enduring in modern anime history. Their romantic flip-flopping was one of the first experiences that many in my generation had with relationship drama. Throw in a love triangle to rival Twilight and you’ve got a recipe for middle school gold. The two teens are far too relatable to anyone who had a nasty middle school crush. They harbor deep love for one another, but both are too stubborn to tell one another. It takes 56 volumes of manga, 193 episodes of anime, two series, and four movies before they’re able to really start their relationship. In the meantime, their tenuous friendship is the driving force of the series.

Kagome’s relationship with the titular character is juxtaposed by his ex, Kikyo, who Kagome is the reincarnation of. Kikyo is stern, serious. Her situation is similar to Sister Angela’s from One Pound Gospel. As a Shinto priestess, her duties prevent her from entering a relationship. This is contrasted with Kagome, who has the freedom to enter a relationship but does not. Takahashi presents us with a character who has every opportunity to get with the boy she likes, but doesn’t. She’s allowed to be her own character first, not just a girlfriend to the main character. In fact, even though the series is named after him, Inuyasha himself is really a secondary protagonist. Kagome is the real hero of this story.

In summary, girls’ media has a bad rap. Rumiko Takahashi has spent over 40 years delivering solid entertainment for girls that presents nuanced characters for girls of every creed to identify with. But in doing so, she comes under much harsher criticism than other writers. We as readers put a lot more moral value on work made by women for women than we do on inherently manly media. If Boku no Hero Academia doesn’t come under fire for not presenting good role models for girls, why does Inuyasha? Why don’t we talk about the frequent sexualization of high school girls in the manga world? Or how Rumiko Takahashi had to leave specific notes to animators not to ever show Kagome’s panties?

Maybe it’s time for us to accept that not all media is going to be one hundred percent perfect, and that we’re setting impossible standards for our favorite shows. But still, after four decades of criticism, Rumiko Takahashi is still kicking. Her Eisner win may have come late in her career, but it came. She’s one of the most influential voices in manga, and her work remains hugely popular. So let’s stop nitpicking little things in her work that our teenage selves would think were annoying, and just sit back and enjoy some of the best manga there is on the market.