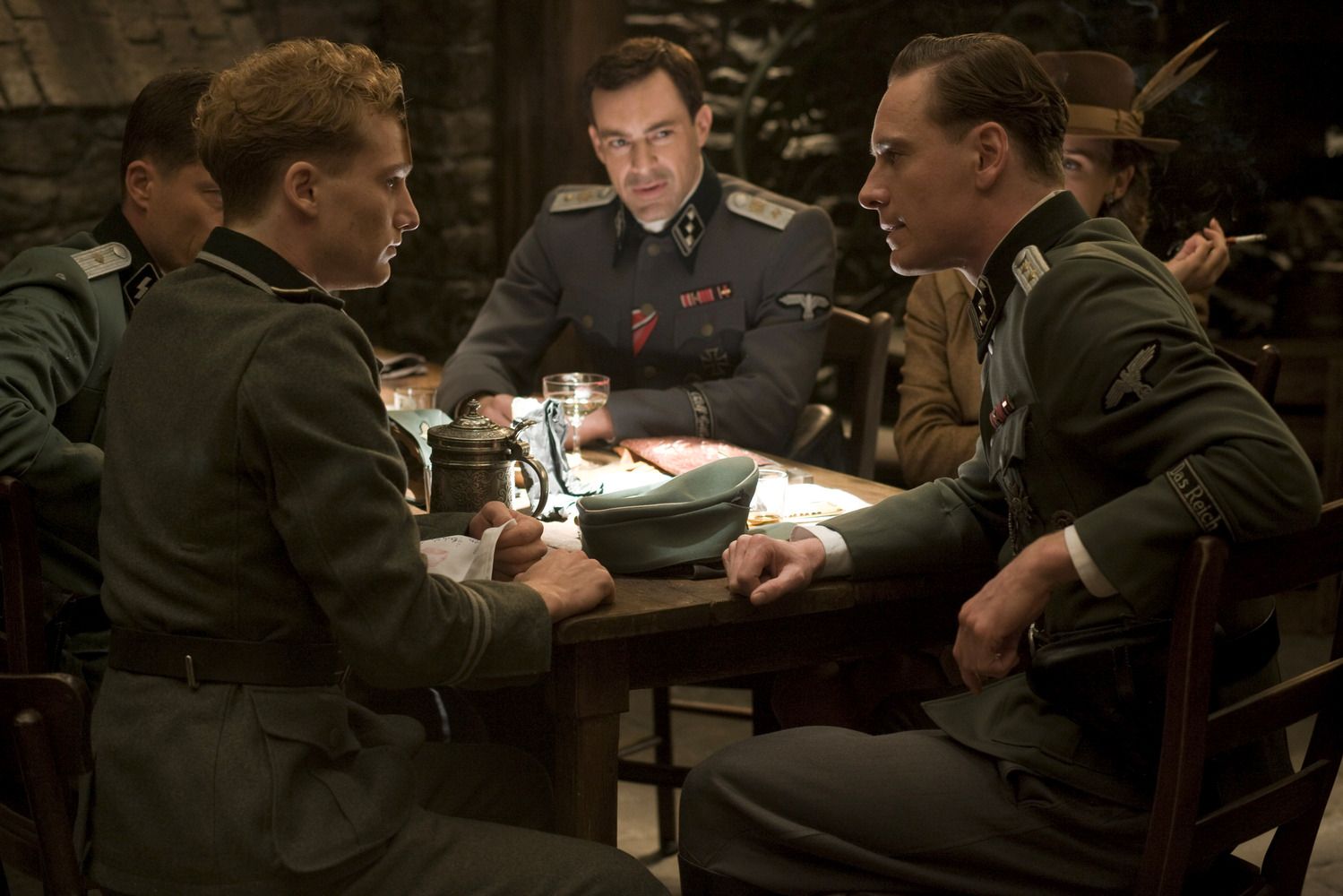 A Subtextual Analysis Of Inglourious Basterds

Inglourious Basterds made its way into movie theaters back in 2009 and made over 300 million dollars at the box office. The movie reaches its first decade of being released. Perhaps now’s the time for a subtextual analysis behind the movie. This article does not cover all the subtext in Inglourious Basterds, but it covers some important aspects.

“The Amount Of Subtext Is Too Much”

Quentin Tarantino is a master of subtext in Hollywood. Every sentence was written by Tarantino always carries a different meaning. This is what makes him the writer everyone wants to be. Truth be told, Tarantino’s movies are works of art. How the characters portray their language is so playful, anyone with a good sense of narrative will see their motives.

Once Upon A Time In Nazi-occupied France

The characters show their motives from the very first scene of Inglourious Basterds. When Perrier Lapadite first encounters Landa, the Jewish hunter, there is subtext going on in the scene. Lapadite is hiding Jews underneath his floorboards. Landa has full awareness of the Jews in hiding. Yet, when the scene begins, their characters fall into a role that wants to achieve a certain goal. Lapadite wants to fool Landa into thinking there are no Jews in the house. Lapadite plays the kind host who has nothing to hide. He establishes this by presenting his family when Landa enters the door.

This action did not need to happen, yet he wanted to establish trust with the Nazi colonel. Landa has full awareness, so he doesn’t fall for Lapadite’s trust bonding, and pretends to be kind by saying,

“Each one of your daughters is more lovely than the last.”

He could have easily told Lapadite,

“I know about the Jews. Surrender them or suffer the consequences.”

That’s not considered good writing though. Landa wants to stay in the character of being kind to not scare the Dyerfuses. If the Dyerfuses underneath the floorboard sensed any danger, they could easily attempt to sneak off (even though the guards are outside, so that might be tricky).

Once the ladies of the house leave, Landa desires to speak English with Lapadite. This could be because Landa is not a master of French, as he states. This could also be the start of his plan for making the Jews unaware of the conversation. Once the switch to English occurs, Landa starts gathering information about the Dreyfuses. If this conversation occurred in French, the Dreyfuses, the French Jewish family hiding underneath the floorboards, would surely be paying attention.

In this scene, Landa speaks to Lapadite about the nickname bestowed upon him by the enemy. What makes his nickname credible is associating his nickname to Reinhard Heydrick’s nickname, The Hangman. During World War 2, Heydrick was known as the chief of the Reich Main Security Office until his death in 1942. While Heydrick did not find affection for his nickname, Landa certainly did. Once Lapadite reveals the hiding place of the Dreyfuses, Landa desires to switch back to France. He tells Lapadite to follow his “Masquerade;” the Dreyfuses assume Landa is departing since Landa clearly states his gratitude towards Lapadite’s hospitality.

Of course, Landa could be talking directly to the Jews, saying goodbye to the Dreyfuses. How evil, letting the opposition think they’ve successfully evaded conflict.

Something to account for as a viewer when analyzing subtext is the decisions of the characters. Landa’s decision in letting Shosanna live is one that progresses through the movie. The decision seemed small at the time for Landa, but this was the cherry on top of the demise of the Nazis. The reason behind Landa’s decision to let Shosanna live can be the very same reason as the Inglourious Basterds letting their scared enemies live; so they can spread fear about their opposition.

Aldo The Apache announces to his fellow solders that their tactics will be that of an Apache resistance. It’s a small detail, but the viewer could associate the Inglorious Basterds with the actual Apache. Instead of fighting American colonizers, they’ll be fighting Nazi’s. With this association, one could put the Nazis and American colonizers under the category of invaders.

Aldo’s speech mixes performance with ambition. Aldo expresses his hatred toward the Nazis in the debriefing of their mission of dropping into France. This is an event that needs to take place in the military. With this mix in performance and ambition, Aldo solidifies that his performance as the lieutenant is as real as his ambition to see the Nazis destroyed.

Sergeant Donny Donowits, also known as the Bear Jew, represents the Jewish vengeance theme the movie expresses. With his baseball bat, he’s able to show the Nazis how real Jewish vengeance is. Viewers can imagine a Nazi stumbling into their fellow comrade with multiple blunt injuries.

After the private from the Nazis witnesses the beating of his commanding sergeant, his fear makes him regret ever being a Nazi. Although the Nazi private wishes to burn his suit after the war, the basterds want him to never forget his evil past. Hence, Aldo proceeds with the scarification of the Nazi sign on his forehead. This scar carries meaning; never forget the past.

This part of the movie follows Shosanna. She’s under the alias of Emmanuelle Mimieux. In order to stay safe, her name is fabricated. The theory suggests that the narrative of how Shosanna came to own the theater is also fabricated. In a scene with Goebbels, she reveals her aunt’s death. But let’s elaborate on this narrative. The viewers know her hatred towards the Germans, as well as her violent personality.

This is far-fetched, but she may have killed the previous owners, who were Germans themselves. The whole inheritance narrative seems too ordinary for Shosanna. The scene with Landa and Shosanna is just perfect. The anxiety that Shosanna feels must be felt by a lot of the viewers. The drums beat as well in the background, creating the emotion Shosanna feels. Throughout the movie, there are scenes where the music captures the emotion behind the characters.

Some viewers are not convinced that Landa bought into the new character of Emmanuelle Mimieux. In the scene, Landa wanted to ask her a question unrelated to the cinema. He says,

“For the life of me, I can’t remember what it is”

— and then there is a pause of about ten seconds. One theory is that in-between that pause, Landa was deciding whether or not to confront Shosanna about her real character. He decided to let her be like Emmanuelle Mimieux.

Major Deiter Hellstorm of the Gestapo is a very important character, but his presence is not prioritized. He prefers to be in the shadows, and Quentin Tarantino captures his ominous presence. In the first scene, the viewer sees Hellstorm talking to the French translator to confirm if it’s Emmanuelle Mimieux on top of the ladder at the cinema. Private Zollor asks Hellstorm to invite Emmanuelle Mimieux. Hellstrom decides to force her to the dinner with Goebbels and Zollor instead. There’s a recurring act that many characters do.

They go against the rules to perform a certain activity. When they oppose the rules, true characteristics show. Emmanuelle was forced into the restaurant by the Gestapo Major. Hellstorm shows he’s very controlling, has no care for anyone who isn’t German, and will do whatever it takes to achieve his goal. Remember Gestapo Hellstorm, we’ll go back to him in a bit.

This chapter of the movie starts with Lieutenant Archie Hicox reporting for duty. If the viewer has a good eye, they will notice Winston Churchill sitting by the piano in the office. By having Churchill there, it adds many key ideas that the movie wants to project without saying. First, the military Archie is from is England. Second, the mission is a very important case that Churchill is overseeing.

Winston Churchill and the British army wanting a film critic to take charge of Operation Kino could have been a mistake from the start. Archie is not a spy. He doesn’t know about blending in. One of the things that gave him away was that bizarre German accent, which Hellstorm noticed from across the room. The other thing to give him away was how he asked for three shots of whiskey. The details that gave the Englishman away were his unawareness of the German culture, which a real spy would consider without question.

Conflict Between The Inglourious Basterds & The British

As Operation Kino unfolds, the viewer discovers Bridget Von Hammersmark, a German actress, created the logistics for the mission. It’s no wonder that Archie and Bridget decided to stay in the bar for one drink. The members of the Basterds think that it’s a bad idea, suggesting they leave, but decided to stay with Archie. The conflict between staying and leaving is seen as different countries conflicting on how which military strategy is the best. In this scenario, Archie and Bridget stick to their roles of actresses and escort, but this action proves to not be the best strategy. They should have left as the Bastards suggested. This shows the actress and film critic has no idea about war. The soldiers were fully aware that their lives were in danger from the start.

Bridget revealing to the men in Hitler’s attendance at the premiere was interrupted by Staff Sergeant Wilhelm. On a deeper level, this reveals how citizens are constantly interfering with the actions of the government. The Staff Sergeant wanted Bridget’s autograph for his newborn son, and his intrusion of sitting at the table causes him to notice Archie’s accent.

The Summing-up Of Inglourious Basterds

When Landa confronts Bridget and Aldo in the premiere, he has awareness of Bridget’s presence in the tavern. The narrative of how Bridget’s foot became injured causes Landa to laugh uncontrollably. Landa could be laughing at the story. He could also be laughing because he senses her falsehood, and cannot believe the ridiculous story that Aldo came up with.

The true meaning of his laugh is never revealed. When Landa separates Bridget from Aldo and his team, he takes her to Shosanna’s office. Landa proceeds to ask Bridget to put her foot on his lap. This scene is associated with the Cinderella story when Cinderella puts on the glass slipper. If the shoe fits, then it surely belongs to the person.

Love Is Never Meant To Be

Think of the film being used to burn the theater. If a viewer sees a Nazi in a movie, they will assume that the Nazi is a bad guy without question in today’s age. When Goebbels’s heart still pumped blood, his goal was to make the Nazi uniform a symbol of heroism. After the death of the Nazi party, Goebbels’ idea of the Nazi party died as well. Movies of today’s age have ensured that the Nazi symbol is a pure form of evil. There are two plans, Shosanna’s plans, and Operation Kino, to kill the Nazis in the theater.

Both plans represent a different form of vengeance. Shosanna’s plan represents subjective vengeance. The death of her family causes her to burn down the theater. Operation Kino represents an objective form of vengeance. The allies want to defeat the Nazis, which they did in 1945. They both are successful in their efforts, which makes the objective and subjective vengeance successful forms. With the subtext discussed in the article, the viewer will notice how Quentin Tarantino is a master of subtext. If you haven’t seen Inglorious Basterds, then you must watch it. You will not regret it.