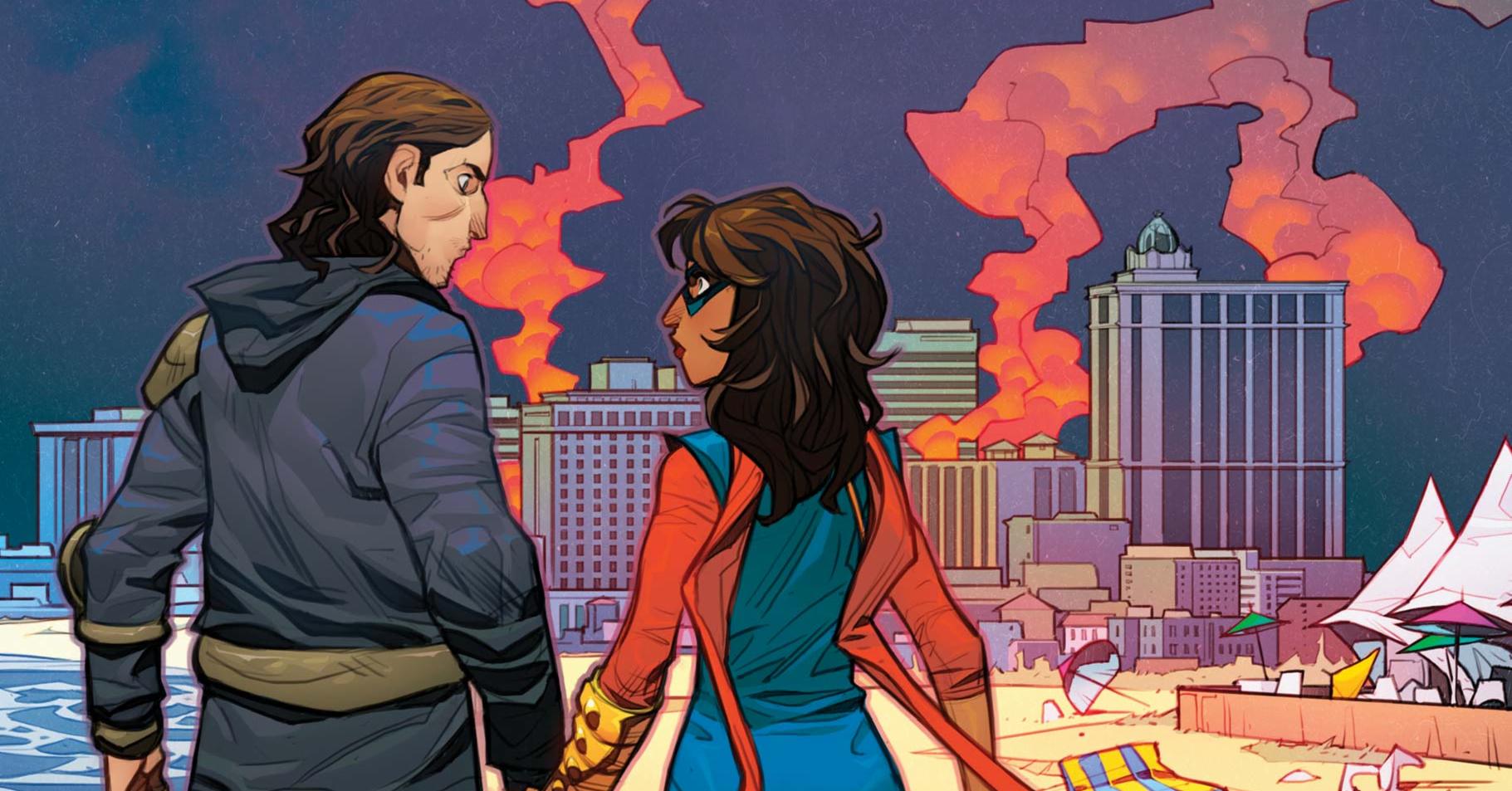 A Fantastic Finale in The Magnificent Ms Marvel #12

With Stormranger off to eliminate Josh, the task of saving Josh and defeating the evil suit falls to Kamala. But since she fell into the Hudson River, who will save Kamala? From Saladin Ahmed, Minkyu Jung, Juan Vlasco, Ian Herring, and Joe Caramagna comes the exciting conclusion to this arc, The Magnificent Ms Marvel #12!

The Magnificent Ms Marvel #12 picks up right where the last issue left off with Kamala’s fall. As Kamala sinks deeper into the water, Bruno dives in and pulls her back to the surface. Onboard his homemade hovercar, Kamala explains the situation and Bruno gives her a change of clothes: her old costume! As they set off to find Stormranger, Doctor Strange appears to them. Kamala’s father still lives but he needs Kamala’s DNA to finish the procedure. While Kamala is happy to help, she decides to go after Stormranger first.

After analyzing the suit, Bruno determines that Kamala can beat Stormranger if she overloads her systems. They arrive just in time to save Josh and Kamala keeps fighting until the suit explodes. While she’s angry that Josh is out on bail and not in prison, she lets him go and returns to the hospital. Kamala’s blood saves her father, though Strange informs her that he sustained permanent damage from the disease.

The Magnificent Ms Marvel #12 brings this long night to a close, ending Stormranger and Yusef Khan’s disease, too. This arc showed us a different side of Kamala, usually an upbeat, hopeful character. Throughout this arc, she’s been more of a reluctant, sometimes penitent, hero. Since she can’t help her father, Kamala throws herself into work helping others. She’s understandably frustrated when her secret life keeps her from her family. Nevertheless, she carries on because she can’t do anything. Even when the person she’s saving is a villain, she knows she’s doing the right thing.

For a moment in The Magnificent Ms Marvel #12, Kamala faces a difficult choice: save her father or save Josh. She loves her father, but she chooses to go after Stormranger. When the opportunity to help her father arises, you would think she’d choose him above all else. But Kamala knows Stormranger is too dangerous to put off, even to save her father. If she had chosen her father, Josh would probably be dead. Luckily, she manages to save both of them. The arc may end here, but there may still be consequences from her choice.

Friends to More Than Friends

By the end of The Magnificent Ms Marvel #12, Kamala and Bruno’s friendship slowly turns more romantic. Over the past few issues, we’ve seen Bruno really come through for her. In this issue, he’s the one who pulls her out of the water. And even after almost drowning, Kamala’s ready with the perfect Star Wars comeback. Although Kamala’s family’s reaction remains to be seen, I hope they accept him. I’ve enjoyed watching them evolve and I’m excited to see how they navigate this new relationship. Also, I doubt their relationship will stay secret for long.

The Magnificent Ms Marvel #12: Back to Basics

Since the new one turned on her, The Magnificent Ms Marvel #12 sees Kamala return to her original costume. While I enjoyed the nanotech suit, I did miss the classic look of her homemade costume. The change could also signify a return to simpler times for Kamala since her father’s been cured.

Interestingly, the overall color scheme of the issue also reflects her costume’s colors, blue, red, and yellow. Since it takes place at night, most of this issue features blue backgrounds. When Kamala faces off against Stormranger, they clash against red backgrounds. This also foreshadows Kamala’s victory since Stormranger has a cool color scheme and red is a warm color. Finally, key moments of hope are highlighted in yellow, like when Kamala reunites with her family. The last page, which features her and Bruno, also maintains a hopeful mood with its warm color palette.

Stormranger appears to be gone and Yusef Khan is successfully recovering from his disease. Where will Kamala go from here? She managed to keep her other life a secret, but I still think her family will figure it out eventually. Kamala and Bruno are taking things slowly but will they be able to keep it a secret? With Bruno hanging out with Ms Marvel so often, will someone figure out her identity? Kamala may have saved Josh’s life but he might still come back as an antagonist; wherever her story goes, I’m excited to see what Kamala does next!

The Magnificent Ms Marvel #12 by Saladin Ahmed, Minkyu Jung, Juan Vlasco, Ian Herring, and Joe Caramagna
A Satisfying Conclusion
This issue brings a long night to an end. Thankfully, Kamala's dad is going to be okay and Kamala found a way to defeat her evil suit. As much as I liked the new costume, I was starting to miss the old one. I'm also happy that Bruno and Kamala's relationship seems like it will finally start to move forward. Readers have been waiting a long time to see this happen. I've enjoyed reading this arc and I hope the next one will be just as great!
93
Amazing!