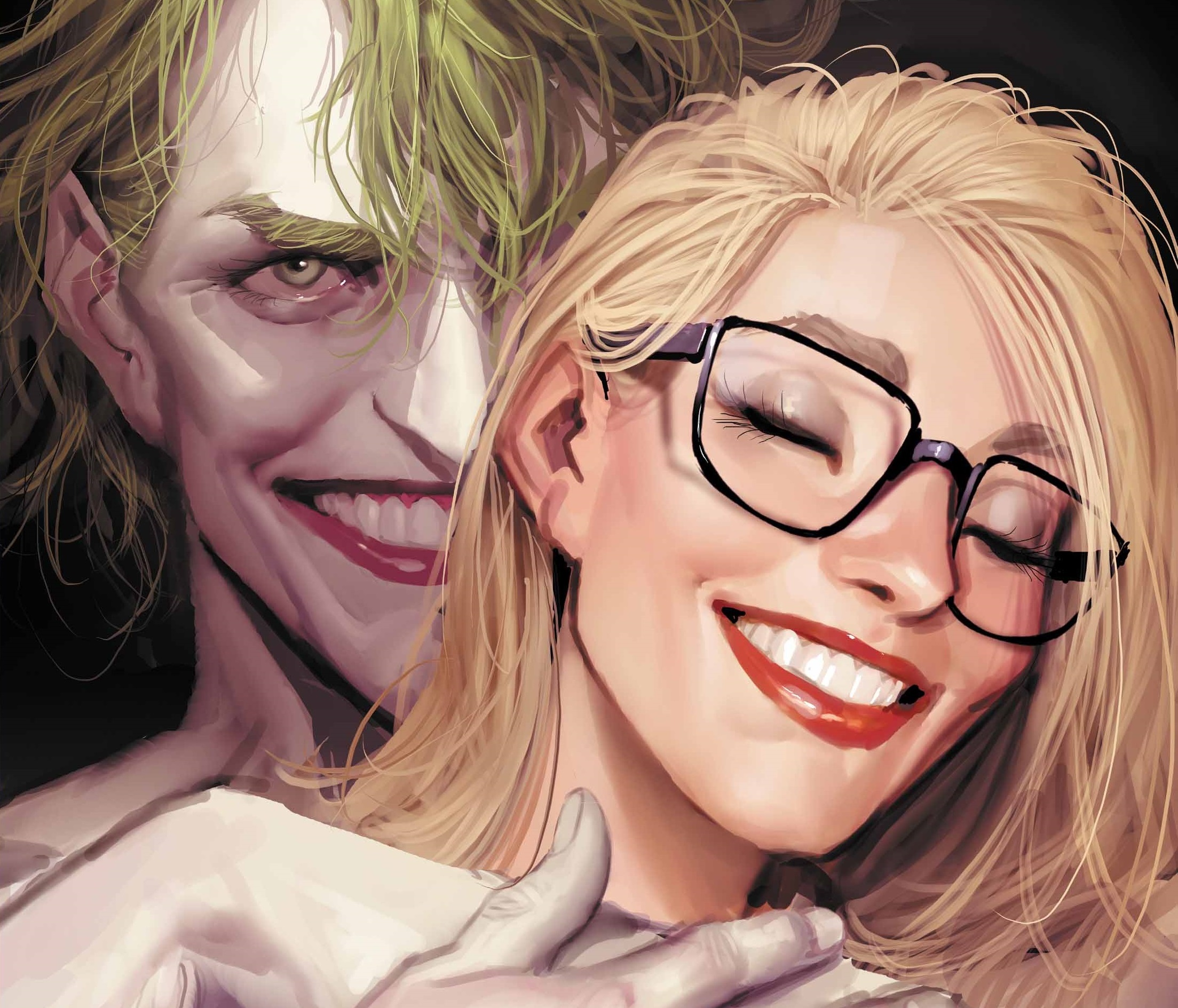 A Face To Face Interview With A Manic In Harleen #2

In a padded room at Arkham Asylum, two individuals sit across from each other. One is a crazed manic in a straightjacket and the other is a psychiatrist trying her best to understand a murder. Dr.Harleen Quinnzel has been through a lot these past few days, but she believes today that she will finally have a breakthrough with the Joker. We last left the Doctor believing that deterioration of empathy is the main reason criminals exist in Gotham. With funding to further her research, she heads to Arkham Asylum.

During her time at Arkham, she continues to have nightmares about her terrifying encounter with Joker. After interviews with many of Arkham inmates and Harvey Dent’s indifference, she finally decides to meet with the Joker. Now, Harleen again is face to face with the man who almost killed her. What happens next? Well, to put it simply, plenty. There are a lot of events that occur between the pages of this issue. Let’s not wait for any further and take a look at Harleen #2.

A Mad Plot In Harleen #2

This issue begins right where the last issue concludes. Joker is now chatting with Harleen about how everyone in Gotham City dreams they could go insane, but if they do they can never go back. Finishing the discussion, Harleen heads home discouraged that she still hasn’t been able to prove her hypothesis. As she begins to drink alcohol she receives a call from Dr. Mathews explaining that she got Harleen an interview with Commissioner Gordon.

She tells her that she can reschedule because of the recent incident with Harvey Dent. Horrified, Harleen turns on the TV to find out Sal Maroni threw acid in Harvey’s face live on television. Still shaken by what she witnessed, she later heads to GCPD to interview Gordon. As they discuss recent events and her ideas, she asks if she could meet the Batman. After waiting a few hours, she’s face to face with Batman and asks him one question.

After receiving an answer she wasn’t looking for she is now more perplexed than ever. Days have gone by and Harvey is now scared and wants to address the public. This goes awry though when he begins to act very rashly saying people like Maroni are monsters. As Harleen watches these events occur on TV, she gets an epiphany. She realizes that all the other psychiatrists that came before her were uncaring towards the Joker. Harleen decides to interview Joker one more time and this time ask him questions he was never asked before. After an intense discussion, she gets up and turns off the security camera. The book then ends with a very close encounter between the two.

An Unnecessary Origin Within The Series

Reading Harleen #2 there are moments that follow Harvey Dent as he slowly becomes Two-face.

As these scenes do help further the plot, they feel a bit irrelevant. It’s excellent to see his origin but this book is called Harleen, not Dent. In Harleen #1 his cameo is arranged wonderfully because he is used once as the driving force to get Harleen to prove her hypothesis and prove him wrong. As there are so many people against her, adding a threat from a political figure becomes the final straw. Again, the moment drives the character and his inclusion fits with the narrative being told.

Harleen #2 Is Not Called Harvey

In Harleen #2, however, Harvey Dent appears as the focus of the book three times, and one of these moments isn’t necessitated at all. Two moments are key to the flow of the story to show how witnessing these events changed Harleen. Even though they are a bit long and could be cut, they fit within the story. The one moment that doesn’t fit is Harvey waking up in the hospital. It’s a spectacle to see Harvey transform, but it feels out of place. It doesn’t connect to Harleen at all and it only grows his character.

If this series had more than three issues, it would be exceptional to get to know Harvey better because he would presumably have a larger role. That’s just it though, this is only three issues, Harvey doesn’t need character development. It would have been fine to see him on TV getting acid in his face and then at the end see how the acid mutated him. This would have had the same effect because we are seeing everything through Harley’s eyes. Having this added scene pulls readers out of a fabulous story and was unnecessary.

Is Harleen More Than Just A Name?

In both books, Harleen is narrating the events that led to her becoming Harley Quinn. In many of the scenes, she keeps wishing she did things differently. She further analyses many moments just like the readers do. As this series only has one issue left, many will question how this will conclude. Many will believe that it ends with Harleen becoming Harley and that’s it, but what if it doesn’t? Could this series have a twist ending? This comic is under the Black Label, which means many of these stories aren’t in continuity with the main DC universe. It also means that this series can end very unexpectedly.

This series could conclude with Harley Quinn telling all this to another Doctor as she tries to become Harleen once more. These could be roles reversed as she is now manic herself. In this issue, Joker mentions that normal people dream of going mad but can’t because there is no going back. In issue one, the reader recognizes Harleen as a driven woman ready to prove her theory and save lives. This series could end with her ready to prove the Joker wrong and confirm that there is a way to come back from madness. There are so many possible outcomes, but the book is called Harleen for a reason. There is something behind that title rather than just a name.

What Did We Make Of Harleen #2?

Even though there are some nitpicks in this issue, Harleen #2 is a grand read for old and new fans alike. There is so much to unravel in this issue that we could go on and on, but they are just too good to spoil. This issue gives us a deeper dive into the tragic story of Harleen, how even a smart woman like Harleen could sink so low. We suppose it is true of what the Joker says,

“All it takes is one bad day.”

In this series, though, it looks like she’s having a bad couple of weeks, or maybe that one day is coming in the finale. It’s so exciting it makes me wonder what ideas Stjepan Sejic has for the final chapter.

There are so many paths this narrative can take and Sejic has been picking all the best ones. Also, if you can’t find a copy of this issue or you do not like digital there is something you should know: coming out next year is a hardcover of this series that looks beautiful. If you are a fan of graphic novels (instead of single issues) you need to add this series to your comic collection. It is seldom hard to find a series that not only has excellent writing and fabulous art but also understands the character. If you are on the search for that comic, look no further than the Harleen series.