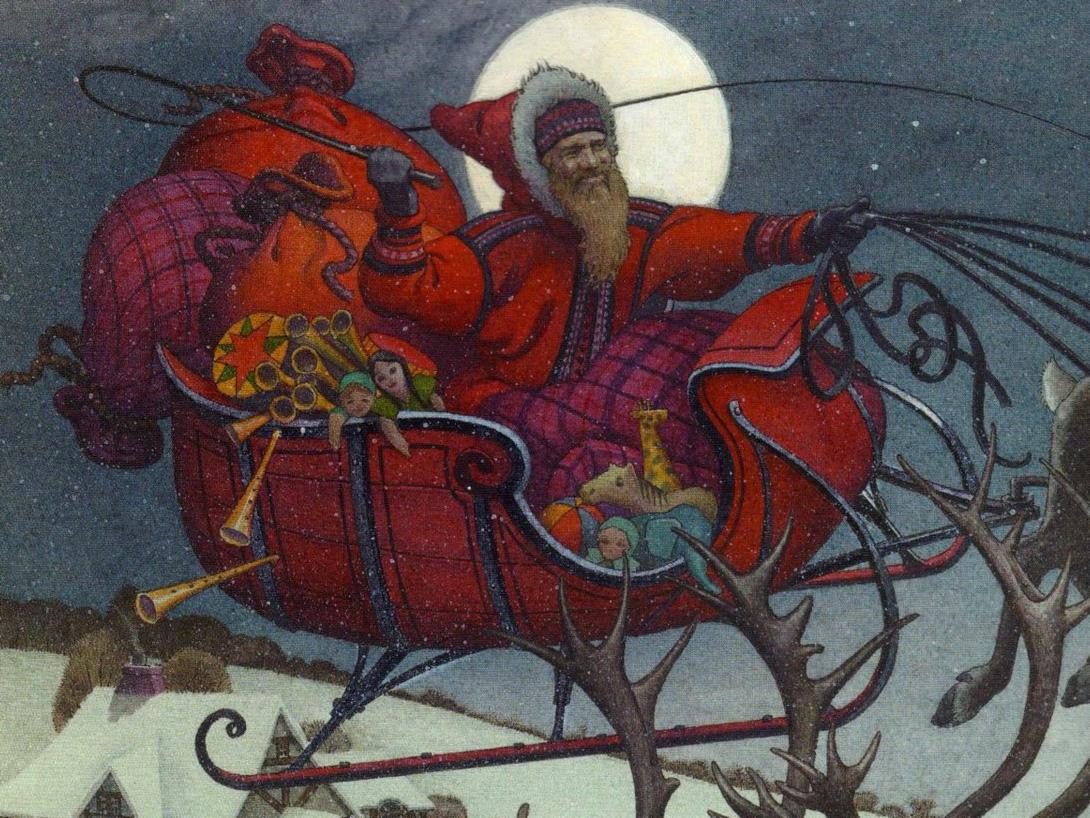 L. Frank Baum is a name not many people may know today; but they may know his book The Wonderful Wizard of Oz, published in 1900. Baum had many ideas for fantasy stories, and the last thing he wanted was for them to be overshadowed by Oz; one such book is The Life and Adventures of Santa Claus, one of the earliest works of fiction to explore the character of Santa, before the likes of The Polar Express or The Guardians of Childhood.

A Mythic Origin For Claus

Baum introduces Claus as an orphaned baby found in the Forest of Burzee. Burzee, the narration explains, is a hidden forest that is home to ancient, immortal creatures and visited by old gods such as Ak, the Master Woodsman of the World. Claus is adopted by the wood nymph Necile, who raises him into adulthood.

As soon as he becomes an adult, Claus learns from Ak about the children who suffer throughout the world. He soon makes it his mission to bring happiness to them, making toys. However, this attracts the attention of the Awgwas, creatures who are happy when children are cruel and disobedient. Naturally, this puts Claus as their enemy, and the guardian of children finds himself at the center of a war of good and evil.

In the introduction to The Wonderful Wizard of Oz, Baum writes of his desire to create “American” fairy tales, ones that are not reliant on Old World lore. Though Santa Claus has his origins in European lore, Baum creates an origin that is mostly devoid of those connections, save for a few archetypal figures and symbols. The most prominent of these is Claus’s mentor, Ak. Ak is original to Baum’s work but borrows a lot from various myths and legends. He’s the leader of the immortals who watch over Baum’s world. Any resemblance to the Greek Zeus or Norse Odin seems intended. Ak is the one who imparts wisdom to Claus on how to aid humanity.

And that’s before getting to Burzee itself. It is an archetypal fairyland, a magical forest that is home to all kinds of creatures. Some of these are from old myths, like the nymphs, fairies, and imps. Others are creations of Baum himself, like the Ryls and Knooks.

In stark contrast to the good forest creatures and gods, there are also the Awgwas. Archetypically, they resemble beings of chaos. They are also ill-defined, leaving the reader to fill in the horrifying blanks. They also lead a horde of monsters evocative of Old World Myths–Asiatic dragons, Giants of Tatary, Goozle-Goblins, etc. Like with Oz, Baum’s strength is in drawing on fairy tale traditions while also putting his own spin on them. They’re specific to his work but draw on older archetypes.

Life and Adventures is one of the few examples of non-Oz books by Baum to have adaptations. Notably, there is the stop-motion Rankin-Bass adaptation from 1985, and the 2000 animated adaptation by Mike Young. There are also numerous, unrelated works that try to explain the origin of Santa in their own unique way, and reading this can lead younger children to become interested in those stories; the aforementioned Guardians of Childhood book being one such example.

The prose in Life and Adventures is simple and easy to follow, much like the Oz books. The edition available to download online also has very charming illustrations. Though the rendering is not clear, they do have that old, classic children’s book illustration aesthetic, which fits the fairy tale charm of the story.

A Story That Goes On

L. Frank Baum wanted to write stories and become something of an American Brothers Grimm or Hans Christian Andersen. He did not exactly succeed; instead, only one of his books is well known to pop culture, and even then filtered through the lens of a film adaptation that casts a huge shadow over any other attempt to adapt its source material.

But that does not mean his other works are worth taking a look into. The Life and Adventures of Santa Claus is one such example and is just as creative as Oz is, even if it draws on a preexisting character. As the holiday season rolls in, it is a good work of fiction for younger kids to enjoy, being very wholesome and earnest in its storytelling. It is, like Santa himself, immortal.