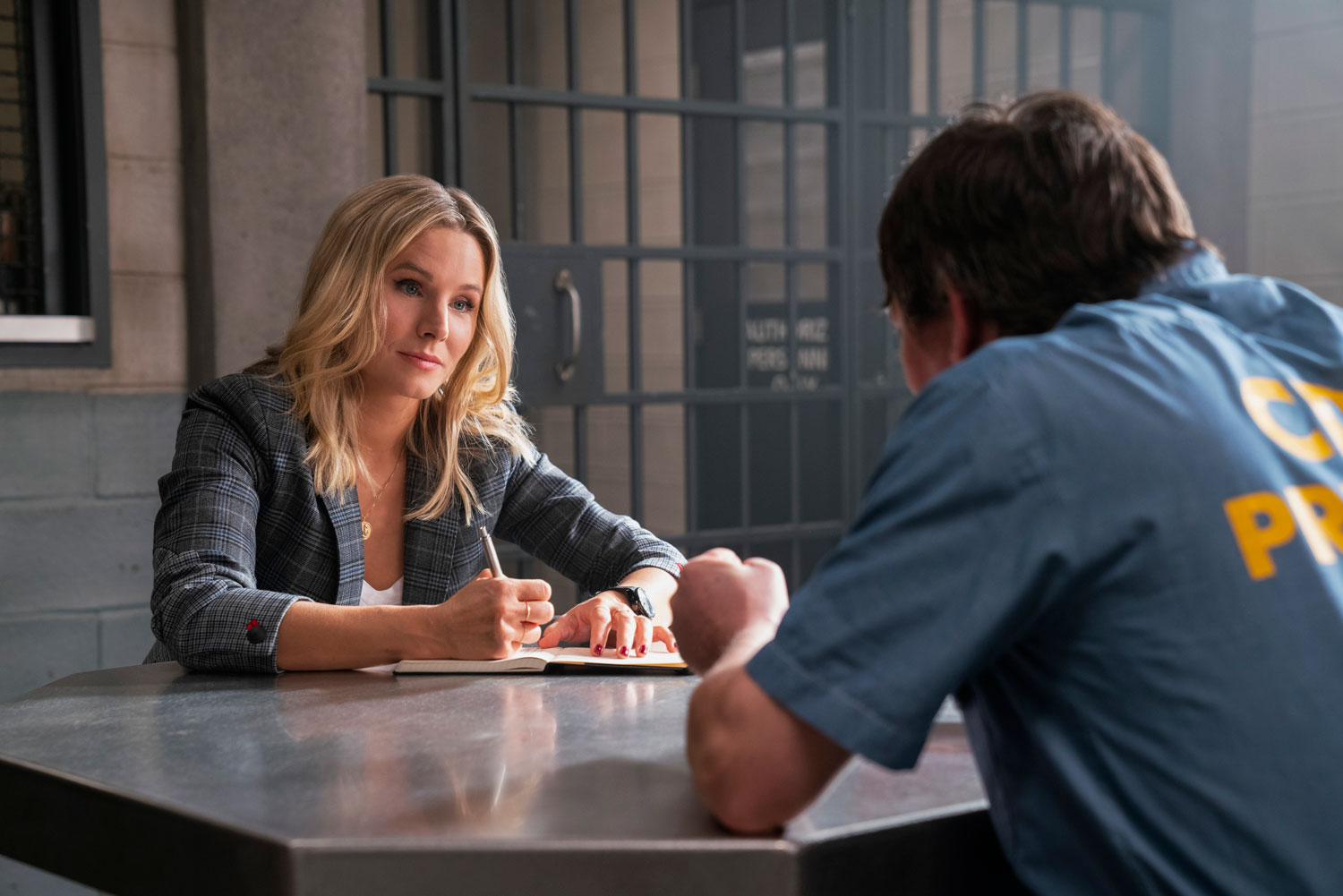 “If there’s a justification for my actions right now, it’s this: I have gone completely mad.”

The above quote is from our heroine Veronica Mars herself, yet it seems to apply to creator Rob Thomas’s way of thinking when he wrote the highly-anticipated revival of this cult classic. Fans turned out in droves for season four after the show’s cancellation twelve years prior. In 2014, the fandom proved their dedication by crowdfunding a feature film to continue Veronica’s story. Kristen Bell reprised her iconic role as Veronica, as did the majority of the ensemble cast.

After seeing the success of the movie, Hulu partnered with Thomas and Bell to give the beloved show a fourth season. Hulu ordered eight episodes and production began in 2018. Season four premiered in July this past year. As an avid defender of Veronica Mars (even despite its rocky third season), I was over the moon with the news that we were getting to go back to Neptune, California once again. The movie had wrapped up most of the storylines that were left unfinished by the show’s early cancellation, but more Veronica Mars is always a good thing, right?

I was thrilled when season four premiered a week earlier than its original intended release date. Now I would’ve preferred they pushed it back as far as possible. Maybe even not released it at all. Don’t get me wrong, not all of the new season was bad. There were some interesting plot points and characters that kept me watching until the end. But trust me, the collective fan outrage after this season is more than justified. Six months later, I’m still mad.

What Worked In Veronica Mars Season 4?

One of the few bright spots throughout the season was none other than Veronica Mars herself. Bell does a great job of replicating the same intense don’t-mess-with-me energy Veronica had as a teenager, now as an adult well into her thirties. Her quick one-liners and determination to solve the mystery afoot translated really well to the Hulu series. Veronica is one of my favorite characters of all time and I’m happy to say that hasn’t changed even if my opinion of the show has.

Another great part of the revival was the addition of the character Nicole played by Kirby Howell-Baptiste. Even though Veronica Mars is known as an ultra-feminist show, sometimes it can feel like a bit of a sausage fest. So getting to see Veronica find a friend in tough bartender Nicole felt like a breath of fresh air. Seriously, the scene of them dancing together while “No Scrubs” is playing goes down as one of the best moments in television history.

Another great addition was Matty, played by Izabela Vidovic; she’s a teenage girl very reminiscent of the Veronica Mars we grew up with. We see Veronica trying to keep Matty out of danger in any way she can. That’s especially ironic considering at her age Veronica was doing much worse. This leads to a lot of sweet moments between the two and allows Veronica to get a sense of what it was like dealing with her as a teen. We also got to see a new side to our favorite bad boy, Logan Echolls. He’s all grown up now.

He’s less impulsive, less violent, a navy man. And most shockingly, he’s in therapy. That’s right, a grown man working on his unresolved issues to try and better himself. Now that’s a keeper! It was really nice to see Logan like this. Throughout the original series, we saw him hit rock bottom on more than one occasion. We’re used to that side of him. Now we get to see the emotionally mature man he’s become. Fans of the show have always loved Logan, and it was nice to see him happy.

And now to the elephant in the room, Logan’s death in the final moments of the season finale. We finally get to see Logan at his best, only for him to be killed in an explosion by one of the least developed villains in the show’s history. The revival had a lot of missteps. Wallace was criminally underused, our favorite hacker Mac was MIA, there were too many new characters and side plots to keep track of. But nothing will ever compare to the betrayal I, along with the rest of the fanbase, felt in those final five minutes of the show.

This season begins with Veronica and Logan finally back together after the events of the movie. They’re living together and in a serious adult relationship. Because of this, the idea of marriage is constantly looming over them. The new, emotionally mature Logan wants to get married and even proposes in the first episode of the season. Veronica, on the other hand, is cynical about the idea and thinks getting married would be a disaster.

As the season progresses, their relationship goes through ups and downs (seriously what was the point of the Leo/Veronica storyline?) but eventually, we made our way to a wedding in the finale. Veronica’s decided that Logan is too important to her to not marry and that she doesn’t want to let her fear and past trauma keep her from something good. At this point, I was beaming at my screen. My favorite character, one I have watched suffer through countless heartbreaks and deaths of those close to her, is finally allowing herself to be hopeful.

And almost immediately that hope was taken away from her.

How Much Trauma Is Too Much?

I know Veronica Mars can be a tragic show, but this one just felt cruel. Adding more and more trauma for your protagonist to work through doesn’t make the show interesting. At a certain point, enough’s enough. You can’t build up a relationship for seasons and finally develop the love interest of your main character enough to deserve her to take all that away for shock value. Because let’s be honest, that’s what it was. Killing off Logan was for shock value, and it was a cheap shot.

If the message from Veronica Mars is going to be that once you recover from one tragedy another one will follow right after, there’s nothing to root for anymore. And killing Logan on their wedding day? Come on! I get that you want to have a narrative impact. But when you have such a passionate fanbase that literally funded the continuation of your series, you’re asking for people to be pissed off. The amazing, revolutionary show Veronica Mars doesn’t deserve to be treated like tragedy porn. It’s like it’s become a challenge to come up with more ways to make Veronica suffer. I won’t stick around to watch that.

Do We Want A Season Five of Veronica Mars?

I don’t. And I don’t mean that in the way that I’m quitting a show just because a character I liked got killed off. I just refuse to watch a show that has no respect for its viewers or characters. Even if I was willing to give another season a chance just for nostalgia value, the comments made by creator Rob Thomas since it’s aired have swayed me completely.

In defense of the choice to kill Logan, Thomas explained that he wanted to turn Veronica Mars into solely a detective show and that Veronica being married would’ve held her back.

I think there’s a reason you don’t see many hard-boiled detective shows where the lead detective has a boyfriend or a girlfriend; it kind of limits your options. It was like we were cutting off a limb to save a life… I love Jason Dohring. And I love the character of Logan. But I feel as though we are going to have a better shot of doing more and more Veronica Mars if our heroine does not have a boyfriend or a husband back home.

Is Veronica Mars the feminist show we think it is?

Season three’s controversial feminism storyline made me think Rob Thomas isn’t exactly sure what feminism is. This way of rationalizing killing off a beloved character seems to add to that theory. Why can’t a woman be married and a successful private investigator? Does it have to be either-or? Why take away the progress Veronica had made towards being a happier person, capable of maintaining healthier relationships to once again leave her hardened and angry at the world? That’s no way to move your show forward. It’s only stunting Veronica’s growth.

I never felt like Veronica had to be married or had to live a domestic life to be happy. But this season we were shown that she finally felt comfortable and loved, and she was still as badass as ever. So to say that this had to happen, otherwise there was no room for further storylines, is wrong. Rob Thomas doesn’t give his audience enough credit. We’ve seen Veronica suffer, we’ve seen her pick herself up again and again. But we’ve never seen her happy. Truly, blissfully happy. Don’t we deserve that after all these years?

We should also consider whether Veronica Mars will work in 2020. It’s the beginning of a new decade and the world’s changed significantly since the show first started. What worked about the 2014 movie was the nostalgia embedded throughout. The plot wasn’t particularly compelling and without the excitement of seeing beloved characters again, it would’ve fallen flat.

It’s not revolutionary to see a strong female lead anymore. Veronica Mars was such an important show because during it’s time there was nothing else like it out there. Now it’s competing against a much more diverse market, and the repetitive storylines and bad attempts at modernization aren’t working. There’s not enough pull to bring in a broader audience and after the death of Logan, I can’t imagine the old one sticking around.

I think this is where we call it. Trust me, I love Veronica Mars more than anyone, but even I’ve reached my limit with it. It spanned years and continents. We’ve seen lives ruined and plenty of bloodshed. The story was epic. It’s time to move on.