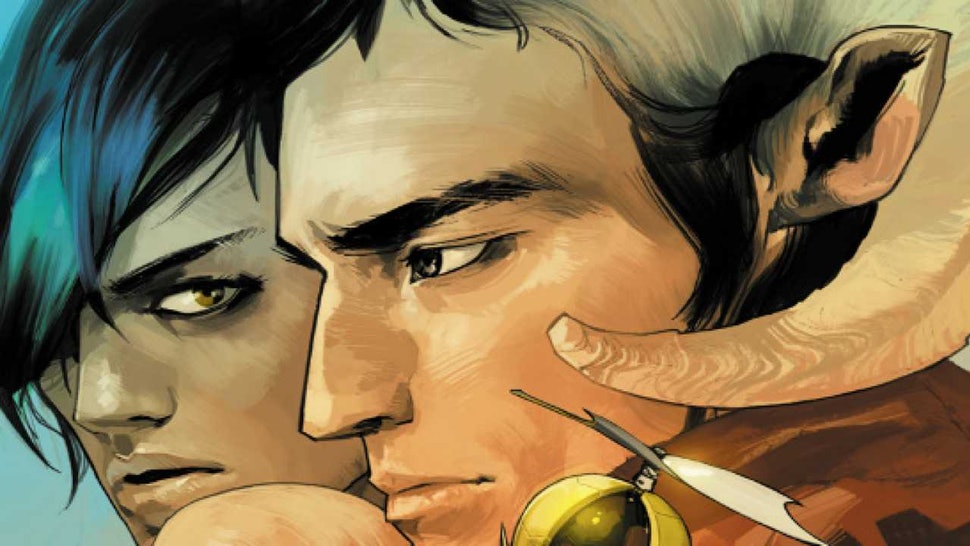 5 Reasons Why You Should Read Saga

Of the three comics I have read, Saga is the newest by a huge margin. 20 to 30 years separates its 2012 conception from that of the others (V for Vendetta and Hellboy, respectively). Saga also happens to be my favorite of the bunch. It’s the only comic I’ve read religiously and desperately: the marker of a great comic. What makes this comic so engrossing? Why should it be a must-read? Whether you’re new to comics or an old fan, here are five reasons why you should give Saga a chance (spoiler-free!)

For a lot of people, a comic’s art is its main selling point. If this is true for you, Saga definitely fits the bill! Illustrator Fiona Staples — who also worked on Riverdale’s sort-of-source-material Archie — skillfully depicts the magnitude and depth of the comic’s many worlds. In addition, her soft but crisp style lends itself to some poster-worthy compositions.

In an interview with iFanboy.com, Staples reveals that Saga’s art is a bit of a step away from her usual aesthetic:

“I’ve always wanted to do a painted-style comic, but in my experiments I always found that painting the characters made them look very static, and somehow less engaging…in Saga, I decided to ink the characters and color them very simply–partly to shave a bit of time off, but mostly to make them clear and instantly readable.”

Staple goes on to note that this simplistic approach allows for the comic’s action scenes to hit that much harder. It’s a trade-off that — thanks to Saga’s stellar writing — does wonders for the story at large.

2. Saga Actively Tells You A Story

Saga’s plot structure is undoubtedly one of its greatest assets. Every decision creator and writer Brian K. Vaughan makes is designed to help us navigate his wild, war-torn universe. Vaughan is a bit of a bigwig himself, credited with titles like Ex Machina and Marvel’s Runaways. He even wrote for the show Lost. It’s no wonder that Saga’s plot grips you and refuses to let go.

By starting in the middle of the action — a birth — Vaughan sets us at a fast pace. We’re given only the most important details: two races at war, both of which are chasing an interracial couple pregnant with a half-breed. As the story unfolds, our not-too-talkative narrator reveals herself to be that same baby. She wittily and intermittently tells us the story of her parents and herself.

In addition, Saga rotates through several narrative threads. This allows us to take a breather from certain situations, while also satisfying our urge to binge. The plotlines are also responsible for giving us different views of Saga’s universe. Vaughan covers everything: royalty, rebels, civilians, assassins. Of course, this means we meet plenty of characters, too!

Vaughan is an absolute master of character writing. Each personality Saga offers is effortlessly unique, with a score of realistic mannerisms and attitudes to boot. This isn’t limited to our main cast, either. Their pursuers are just as — if not more — nuanced. Vaughan has us constantly questioning their motives; you may even find yourself rooting for them.

Saga has also received praise for its depiction of non-white characters. In an interview, Vaughan attributed the decision to illustrator Fiona Staples:

“In my mind, I was like, ‘Oh, they are white, because that is the default for all characters in science fiction and fantasy’…This is all entirely a benefit of working with great collaborators like Fiona Staples and reaching out beyond my own initial ideas and assumptions.”

Really, this choice just makes plain sense. Saga’s characters are all aliens, after all; who says that white is an intergalactic skin tone? The comic has also been praised for its LGBTQ+ representation. This includes the increasing involvement of two male reporters and partners. As their role in Saga becomes larger, we’re introduced to the intimate parts of their relationship. All in all, Saga’s characters are given just the right amount of thought. They all laugh, cry, and fight; none of them are easily forgotten.

4. The World-Building Is Genius

Saga is partially inspired by the ever-popular Star Wars, which itself is gaining a new life in comics. Both are space operas; there are many comparisons to be drawn between their lore. But Brian K. Vaughan’s universe is far from a copy. In fact, in some ways, Saga expands the ideas that Star Wars touched on. It’s also by far the more mature of the two. Little is sugar-coated or diluted; we see things as they are, as they happen.

Without getting into spoiler territory, there’s an intergalactic war going on. The “sides” initially included two races: one with winged humanoids, the other with horns. However, the war has since swallowed up the whole galaxy. As a result, every planet now fights against its own moon. Through it all, we come across some wild things: pink ghosts, tree rocket-ships, a king with a T.V. for a head. Somehow, Saga makes you accept it all without a second thought.

Last, but certainly not least, we have Lying Cat. She’s basically a walking polygraph. Anything less than the truth and she’ll call you out; she’s also got the teeth, claws, and attitude to do something about it. In other words, Lying Cat is an icon. ‘Nuff said.

Give Saga A Try!

There are currently 54 issues in Saga. That is to say, there’s plenty out there to read. With luck, I’ve already convinced you to take a closer look. If not, it may help to know that Saga is currently on hiatus. It began in July 2018 but seems to be nearing its end. In fact — according to Brian K. Vaughan — Saga itself already has an end in sight. Issue #1 can be read online here. Take a look; I promise it’s worth the time! You’ll want to be with the rest of us when Saga crosses its finish line.