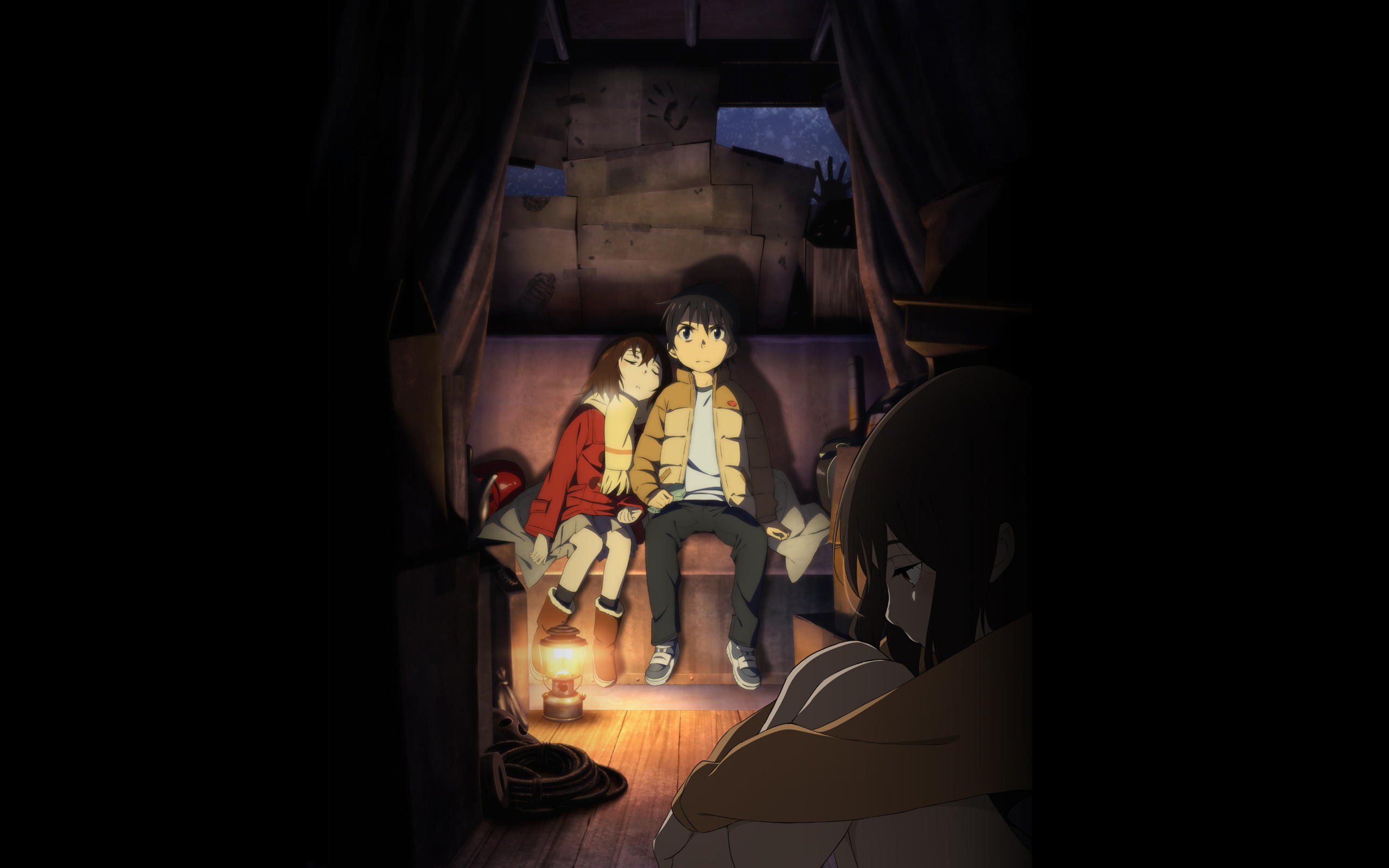 Erased was one of the most popular anime shows back in 2016. The series showed a unique premise, hosted interesting characters, and featured emotional moments (click here for Erased overview). However, despite the series’ initial success, Erased received mixed reviews because of its ending. One of the most prominent aspects criticized was the life decisions made by the deuteragonist, Kayo . Specifically, over what Kayo chooses to do over the time skip in Erased. WARNING: This analysis features SPOILERS for Erased anime and manga. If you have not watched or read the series then do not continue!

In the beginning, fans pitied Kayo Hinazuki for living with her mother’s daily abuse and her lack of friends. However, as the series progressed, they felt ecstatic witnessing her come out of her shell and develop a relationship with Satoru. As a matter of fact, many fans began shipping both Satoru and Kayo Hinazuki due to how close they grew.

Unfortunately, there was a sudden backlash against her character after the time skip occurred. For, this time skip revealed that not only did Kayo Hinazuki marry while Satoru was in a coma, but she also had a baby.  This revelation that Kayo moved on with her life while Satoru was comatose angered many fans. (Mostly because they considered Erased “ruined” due to their ship sinking.)

Now there is nothing wrong with shipping a specific pairing. It is understandable to feel disappointed when a pairing you shipped does not get together. However, to allow a pairing to completely warp your perception of a series just because they do not get together is a disservice to any show let alone Erased.

The Unnecessary “Excuse” In Erased Vol. 5

The Erased manga received eight volumes which Yen Press released in omnibus format when the series was licensed. (There were four omnibus volumes released in the U.S.) Recently, Yen Press printed a collection of single-character-focused chapters compiled in Erased Vol. 5. One of the chapters featured in Erased Vol. 5 follows Kayo Hinazuki during her time with Satoru comatose.

This chapter featured Kayo visiting Satoru almost every day in the hospital, completely herself to him. Satoru’s mother (Sachiko), who witnessed Kayo’s dedication, chose to move him to a different hospital far away. She does this in order to give Kayo the chance to live her life without him. This chapter felt like the mangaka, Kei Sanbe, was giving fans an excuse as to why Kayo Hinazuki moved on. He is trying to appease fans’ anger by showing that Kayo was essentially “forced” into moving on by Satoru’s mother. However, regardless of whether or not Kayo Hinazuki had a choice, she does not deserve the backlash she receives.

Fans try to make Kayo Hinazuki seem ungrateful to Satoru for moving on with her life (considering everything he did). However, they tend to forget that Satoru’s original mission in the series was not to save Kayo but his mother. After finding his mother murdered in their apartment, he uses his “revival” power to go back in time.

He has to solve a serial-killer case from his childhood to prevent his mother’s death in the present. Kayo was one of the many children murdered at that time. Therefore, while they do form a genuine bond, Kayo was not his main objective. Now that does not change the fact that his mission evolved as his time in the past prolonged. Nevertheless, his original objective was to save his mother, saving Kayo was a step towards accomplishing that goal.

2. The Obstacles Kayo Hinazuki Had To Overcome

Kayo Hinazuki was frequently and viciously abused by her mother. This caused her to shut others out and close herself off from people. Thanks to Satoru, she opens up and builds genuine friendships with her classmates. Frankly, Hinazuki deserves happiness after all she has gone through. She grew up in a household where her mother beat and insulted her. She never felt legitamately loved in her life. However, as an adult, she is now able to love her child the way she never was. She finally has a real family of her own, and fans should not hate her for that.

However, let us also not forget that in the original timeline, Kayo gets killed. She literally dies at 11 years old. Considering the alternative, whether fans ship Satoru and Hinazuki or not, Kayo surviving is already the “better ending.”

3. Kayo Hinazuki Was Just A Child

A common argument I see against Kayo is the fact that she did not wait for Satoru. People considered it cruel for her to move on with her life before he even woke up. This argument is infuriating, since people seem to disregard the fact that Kayo was a CHILD.

Kayo Hinazuki was 11-years-old when Satoru went into his coma. She had just relocated from her abusive home to live with her grandmother. (Plus, she managed to avoid getting killed thanks to Satoru.)  As a child, Kayo Hinazuki underwent harsh conditions that most adults never have. The addition of Satoru going into a coma only added to her troubles.

Also, let’s not forget that despite being in the body of a child, Satoru had the mind of a 29-year-old man. Kayo was a child both mentally and physically. Putting pressure on a child to put their lives on hold for someone seems crueler than them moving on.

4. Kayo Visited Satoru Every Chance She Could

As Erased Vol. 5 shows, Kayo visited Satoru every chance she had when he was in a coma. She put aside any chance at extra-curricular activities or the resemblance of a life for Satoru. While Kayo’s chapter in Vol. 5 feels created to pacify fans about Kayo’s decisions, it conveys she cares about Satoru.

Kayo is not the ungrateful person some fans try to portray her as. She wanted to continue visiting Satoru; however, Sachiko saw she was wasting precious time instead of enjoying life. His mother knew Kayo would have continued seeing him on her own, which is why she moved Satoru away.

Satoru’s mother forced Kayo to make the decision to move on because she knew it was for the best. The end of the chapter shows Kayo crying that Satoru is gone. As sad as it sounds, Satoru’s situation played as a heavyweight for Kayo. A child should not feel obligated to put their lives on hold. Perhaps Kayo understood that deep down, which is why she smiled at the end of her chapter, promising to live her best life.

When Satoru finally wakes from his coma, Kayo has already started a family. Thanks to the push from Sachiko, Kayo was able to live her life and have a baby. However, despite receiving that needed push, Kayo Hinazuki still felt guilty for moving on.

She felt it was unfair for her to move on with her life while Satoru was in a coma. But, like Sachiko, Satoru calms her and tells her that he is happy for her (like the hero he is). He knew it was not her responsibility or obligation to wait.

The most beautiful part of this story is not only Kayo surviving but her forming a family with another survivor. Thanks to Satoru, he not only provided Kayo with a different future, but her husband as well. Satoru managed to create a timeline where both Kayo and her husband survive the serial killings and create new life. When considering the alternative, both being dead at 11 years old, this ending seems much better.

Regardless of whether or not you ship Satoru and Kayo, one should not hate her character simply because she did not end up with him. Now, you can feel upset that you were led to believe the pairing developed to go a certain direction (or how the ending blindsided you). However, fans should take into context the reality of Erased’s situation.

Kayo was a child when all this happened, not an adult (or mentally an adult like Satoru). To place the responsibility of caring and waiting for Satoru to wake up on her in order for Kayo to start living her life again afterward is cruel. This job is for Satoru’s mother since she is both his family and an adult.

Hinazuki underwent abuse which froze her life as a child. However, after finally being free of that situation, she could not afford to stand still again. Satoru fought too hard for her to enjoy her life only for her to stop to take care of him. Just because he saved her life does not mean he owns her! This is why everyone should give Kayo Hinazuki a break; the girl has gone through enough already.

Erased Vol. 5 is available for purchase through Amazon, Barnes and Noble, and Rightstuf. For more Animanga analyses, click here.