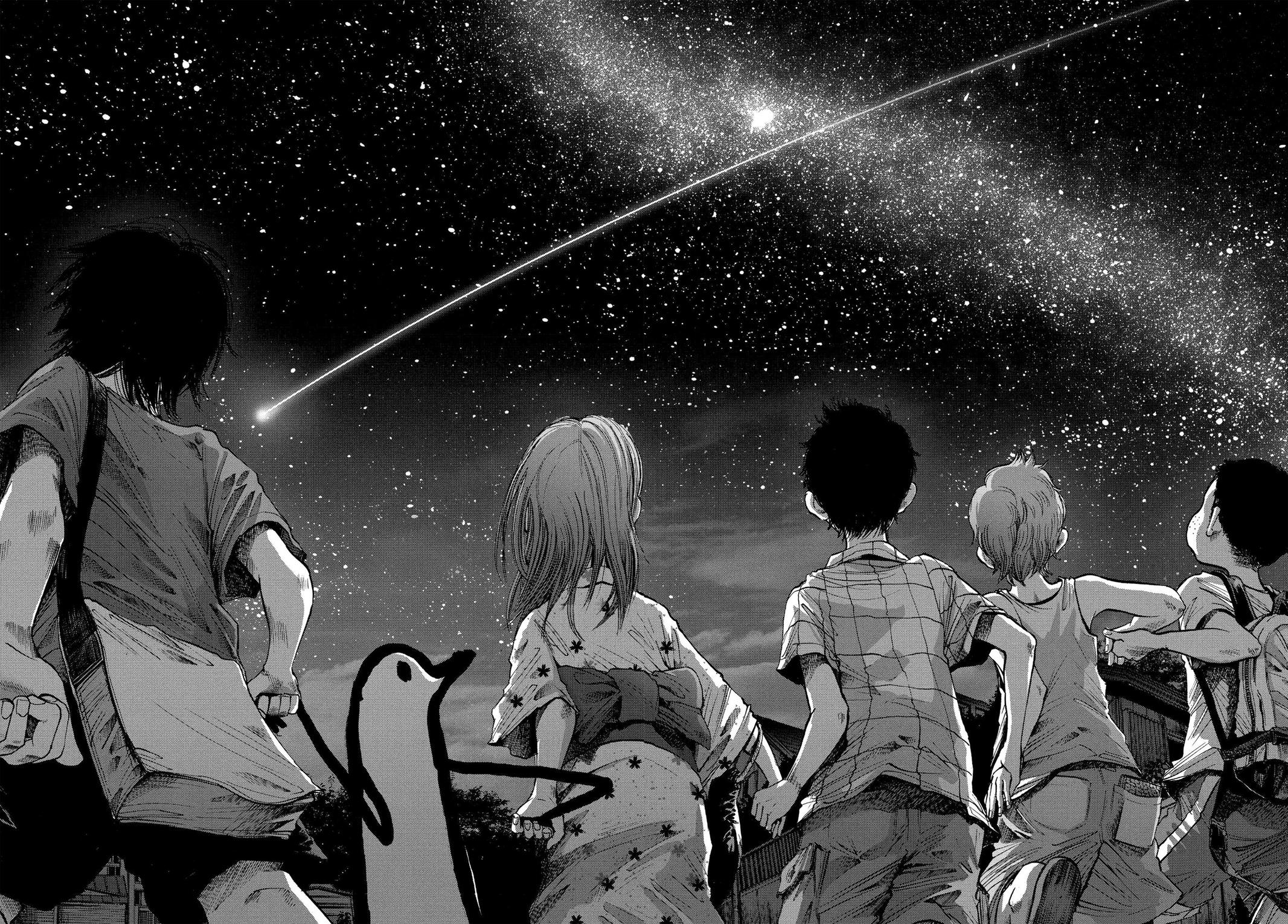 Manga, like any other form of media, often comments on and critiques modern global issues. As opposed to running from tough topics, such as the impact of war, ableism, gender-based discrimination, depression, and sexual misconduct, the five manga introduced in this article tackle them head-on. These manga contain fictional characters who navigate real-life situations and face several problems affecting people all over the world. Step outside of your comfort zone and into these characters’ minds to learn about the reality of the world we live in.

On August 6, 1945, at 8:15 a.m., the United States Air Forces dropped an atomic bomb on Hiroshima. The bomb instantly killed over 80,000 people and exposed survivors to fatal amounts of radiation. Keiji Nakazawa, the author of Barefoot Gen, was only six years old when the bomb murdered his family. He and his pregnant mother helplessly witnessed the death of his father and brother. In the introduction to Barefoot Gen, Nakazawa writes, “For the rest of her days, my mother never forgot the sound of the voices of her husband and son, crying out for her to save them” (5).

Nakazawa recreates his haunting life story through Gen, the young male protagonist in Barefoot Gen. The manga is set during World War II, before the United States dropped the bomb on Hiroshima. It illustrates the different challenges Hiroshima citizens faced, such as famine and discrimination, due to Japan’s wartime climate. Moreover, readers follow Gen on his adventures as he tries to understand war and struggles to survive.

Nakazawa’s manga Barefoot Gen tackles the topic of war and the effect war has on innocent civilians. Although Nakazawa was grateful for surviving World War II, he “vowed that [he] would never forgive the Japanese militarists who started the war, nor the Americans who had so casually dropped the bomb” because of the pain he, along with other civilians, needlessly suffered (8). He viewed war as a global issue that needed to be addressed. As a result, Nakazawa, like his father, wanted to promote world peace. In fact, after Nakazawa released Barefoot Gen, a pacifist group called “Project Gen” formed. This group encouraged world peace through education and non-violent efforts. In brief, Barefoot Gen encourages peace by illustrating the physical and psychological damage caused by war.

To learn more about A-bomb victims and Hiroshima peace efforts, visit the Hiroshima Peace Memorial Museum website. If you would like to encourage and promote world peace, join over 75,000 people and 500 organizations at World Beyond War.

Takehiko Inoue, the author of Real, is well-known for his popular manga series Slam Dunk. Although Real and Slam Dunk both focus on basketball, Real differs in that it features several physically disabled characters. For example, Kiyoharu Togawa, a wheelchair basketball player in Real, suffers from osteosarcoma and amputates his right leg. Soon after the amputation, Togawa becomes depressed and meets Tora, a man with rotationplasty. Tora becomes Togawa’s mentor and reminds Togawa that his disability does not define him. In addition to Togawa and Tora, Hisanobu Takahashi— a former high school basketball team captain—  suffers from paralysis after surviving a tragic car accident. Takahashi’s popularity diminishes and he, like Togawa, becomes depressed. He turns to his father, a man he hasn’t seen in eight years, for emotional help. In short, Inoue realistically explores a variety of psychological difficulties caused by physical disabilities through the characters’ stories in Real.

Ableism As A Global Issue

People With Disabilities In The Media

Additionally, Real adds to the representation of people with disabilities in the media. If interested in learning about other fictional characters who have disabilities, check out Marvel’s Hawkeye, a deaf superhero who defeats his enemies with a custom-made bow and arrow, and Daredevil, a blind man who seeks justice in two ways— as a lawyer and as a vigilante.

Transgender people, as well as other members of the LGBTQIA+ community, are often subjected to hate crimes, not only in the United States but all over the world. For example, records show that in 2017, 29 people in the United States were targeted and murdered for being transgender. Furthermore, data shows that in 2018, 369 transgender people were murdered worldwide, with 167 victims in Brazil and 71 victims in Mexico. The sickening number of deaths in the transgender community highlights several global issues, such as trans-phobia and gender-based discrimination.

Takako Shimura, a Japanese mangaka, addresses trans-phobia by illustrating the struggles of transgender people in Wandering Son. The manga features two friends, a transgender girl and boy, who work together to navigate puberty and establish their gender identity. Both characters endure bullying from their classmates and find solace in their friendship with one another. After reaching adulthood, the transgender girl, Shuichi Nitori, eventually writes about her transgender experiences in her memoir Boku wa, Onna no Ko (The Boy Who is a Girl).

Wandering Son, although geared towards young audiences, is a manga that people of all ages should read. Although fictional, the manga provides an easily comprehensible narrative that can help audiences better understand the transgender experience and hopefully reduce the amount of trans-phobia in the world. For more literature regarding members of the LGBTQIA+ community, try reading Shimura’s other manga series Sweet Blue Flowers. About high schooler Fumi Manjome, Sweet Blue Flowers follows her romantic endeavors as a lesbian. In addition, try reading Mason Deaver’s I Wish You All the Best, which features a non-binary high school senior named Ben De Backer.

Fight against transgender discrimination with the National Center for Transgender Equality. You can also help provide micro-grants to those needing name/gender changes on legal documents with Trans Lifeline. If you or someone you know is a part of the trans-community and is in need of help, call the Trans Lifeline Hotline, currently available in the US and Canada. US: 1-877-565-8860 Canada: 1-877-330-6366.

Goodnight Punpun, a manga series created by Inio Asano, critiques reality by exploring several global issues including depression, domestic violence, sexual assault, murder, and suicide. In brief, Goodnight Punpun is a thirteen-volume series that revolves around the life of a boy named Onodera Punpun. As Punpun ages, more and more of his dreams are crushed. His suicidal mother discovers she has cancer, his uncle’s girlfriend rapes him, and the love of his life tries to kill him. Due to his life’s complexities, such as his dysfunctional family and unfulfilling love life, Punpun evolves from an innocent child into a depressed and unrecognizable murderer.

An important element of Goodnight Punpun is that readers never see Punpun’s face, as it’s never illustrated in the manga. Instead, Punpun appears in the text as a bird, or similar creature, amongst other humans. This tactic forces readers to realize that Punpun could be anyone in the real world; he could be your neighbor, best friend or —  even worse — you.

After Asano completed Goodnight Punpun, an interviewer asked him, “Should manga be a diversion from reality or a weapon to be used in it?” Asano answered, “Up until now I’ve been saying that escapist manga is bullshit and that I want to make a manga that impacts reality.” In other words, Asano wants his manga to educate readers about the real world. Hence, many readers believe that Goodnight Punpun comments on two prominent global issues: depression and suicide.

Several characters in Goodnight Punpun suffer from depression and suicidal thoughts. Although these characters often smile and claim to be alright, they suffer silently and, as a result, do not receive proper help. Unfortunately, many people in the real world live like these characters. Goodnight Punpun raises awareness for those burdening mental illnesses by illustrating what it’s like to experience depression or to know someone who does. Referring back to Punpun’s faceless caricature and its significance, Asano forces readers to acknowledge that depression does not have a specific face or expression, anyone could be hurting.

Find out more about depression and other mental illnesses, as well as their respective treatments, at the website for the National Institute for Mental Health. In addition, get in contact with free live crisis counselors by texting “Connect” to 741741 (US). If you are feeling suicidal, know that you are not alone. Please call the National Suicide Prevention Lifeline at 1-800-273- 8255 to receive immediate help.

Thanks to the rise of the #MeToo movement, sexual misconduct evolved from a taboo subject to an openly discussed global issue. People of all races, genders, and cultural backgrounds came forward to tell their story as survivors. Unfortunately, as the amount of #MeToo confessions increased, the number of victim-blamers and sexual assault doubters have also increased. Many of these doubters questioned why survivors waited until the #MeToo movement to tell their stories and seek help.

Moto Hagio’s manga series, A Cruel God Reigns (also referred to as After Us, The Savage God) clearly illustrates why many survivors don’t— and in some instances can’t— come forward immediately after their assault. For example, the main character, Jeremy, is a teenage boy who lives with his beautiful mother, Sandra. After Jeremy’s father died, Sandra became mentally unstable and suicidal. She finally regains happiness when she starts dating Greg, a seemingly rich and charismatic gentleman. Soon after their relationship begins, Greg starts to routinely sexually abuse Jeremy. Unfortunately, Greg also threatens to hurt Sandra if Jeremy seeks help or tries to resist the assault. Nevertheless, Jeremy risks confiding in his girlfriend, Vivi, who refuses to believe his confession. Feeling lost, Jeremy briefly considers telling Sandra but instantly shies away from the idea. He fears the loss of Greg would cause his mother to become mentally unstable again.

Jeremy’s inability to get help due to Greg’s control over his life is one example of why many survivors remained silent about their stories until the #MeToo movement. Many people cannot speak up due to their attacker’s threats and abuse of power. Hagio’s A Cruel God Reigns effectively addresses realistic global issues regarding sexual assault and, as a result, received the Osamu Tezuka Cultural Prize. Although A Cruel God Reigns acquired this award in 1997, the global issues it explores are still relevant today.

Receive help, advice, or just a listening ear 24/7 from RAINN (Rape, Abuse, and Incest National Network) in either English or Spanish through a free confidential online chat or by calling 1-800-656-4673. RAINN also openly supports and seeks to help LGBTQIA+ survivors.

These five manga series acknowledge and illustrate how war, discrimination, mental health, and sexual assault affect people all over the world. Although you may not be directly affected by these global issues, we, as a community, must work together to raise awareness and provide aid to people who are not as lucky.