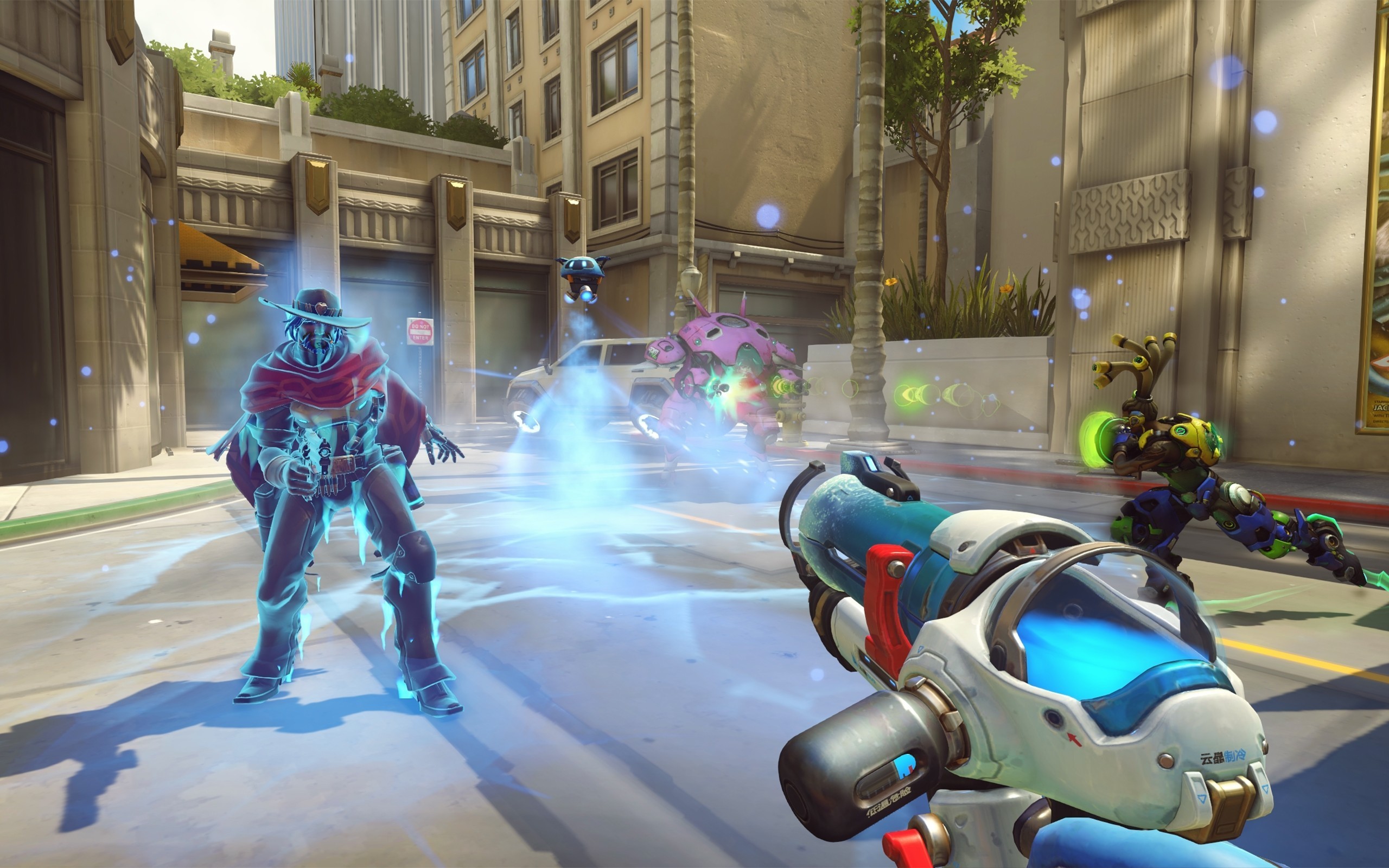 2019 Is Off To A Great Start With Overwatch Lore

January has been a busy, busy month for Overwatch fans. After a year of reworks and relatively quiet repeat events, all of this sudden activity is more than welcome. 2018 did bring us Brigitte, Wrecking Ball, and Ashe, plus the D.Va and McCree/Ashe cinematics. But a new comic hasn’t been released since Retribution debuted almost a year ago in April 2018. While the new lore update isn’t exactly a comic, it does bring hope that perhaps 2019 will be the year Blizzard gets back to more regularly developing the lore that keeps many of us coming back to Overwatch. Let’s take a look at this month’s lore updates and what it means for the future of Overwatch lore.

As Winter Wonderland 2018 wrapped up in early January, Blizzard dropped a new short story, Bastet. The story, written by Michael Chu, picks up where the 2016 comic Old Soldiers left off with Soldier: 76 and Ana reuniting after a brief skirmish with Reaper.

Bastet begins in the aftermath of their fight against Reaper. 76 tracked Ana to her native Egypt, where she had been hidden in secrecy after she was allegedly killed by Widowmaker in a sniper battle. Reaper followed Jack, attacked the two of them, and was recognized by Ana as Gabriel Reyes. Jack and Gabe were, of course, thought to be dead after the explosion in Switzerland.

76 is wounded in the fight, forcing Ana to take him back to her hideout. The remainder of the story focuses on Jack recovering from his wounds in Ana’s hideout as the two reminisce about their Overwatch days. Jack attempts to convince Ana to return to duty to help him with his cause, but she is hesitant to return to a life of killing. In light of the return of Gabriel Reyes, however, and her inability to resist vigilantism against crime lords like Abdul Hakim, it seems that she has little choice.

The largest revelation of Bastet, particularly for LGBTQ+ fans, is that Soldier: 76 is officially canon gay. When Jack agrees to help Ana take down Abdul Hakim to convince her to help him, the two spend a great deal of time tracking and waiting. During some downtime, Jack looks through a stack of photos. The first of these is a picture of then-much-younger Jack, Ana, and Gabe. The second is a picture of Jack and Vincent.

Vincent is revealed to have been Jack’s boyfriend during the early days of Overwatch. Things, however, didn’t work out. Vincent seems to have been a civilian, or at least someone not directly involved Overwatch business. Jack hoped to return to normal life with him after the war ended, but reflects that normal lives are not for “people like [them].”

Jack “could never put anything above [his] duty,” so the pair split. Vincent went on to marry another man and lead a normal, happy life. 76 denies “keeping a candle lit for him” and says that he’s happy for Vincent. He knew he couldn’t provide a happy life for Vincent given his lifestyle and dedication to duty above all.

Interestingly, Vincent has been around since 2016, we just didn’t know who he was yet. Reflections featured several characters celebrating during the holiday season. Jack is pictured with Ana, holding a picture of himself with the man we all now know to be Vincent.

Before Reaper/76 fans rejoice completely, however, there is a line in Bastet that raises questions about Gabriel Reyes. When Ana agrees that relationships for vigilantes “don’t work out so well,” Jack responds that “at least [Ana] and Gabe managed to have families.” We all know about Fareeha, of course, and Ana’s relationship with Fareeha’s Canadian father, Sam. But Gabe’s family is definitely news. While some have sweetly suggested it’s possible the reference is to Gabe’s Blackwatch “family,” the Reflections comic suggests otherwise. One of the strangest images from Reflections was of Reaper stalking an unknown family in the rain. Where all of the other images made complete sense in the context of lore at the time, Reaper’s seemed completely out of left field.

With this new information, though, it is likely Reaper is, in fact, stalking his former family. Some have speculated that the small child in the picture is his son, and the woman his wife. It’s plausible that Gabe could have had a son shortly before the fall of Overwatch. However, we really aren’t sure how long Gabe was heading down the path toward becoming Reaper.

Retribution took place 7 years before current time, and there’s a good chance the boy is around that age or a bit younger. Given that Reaper is currently in his late 50’s, it’s probably more likely that he had a child around when Ana had Fareeha, and Jack was dating Vincent. In that case, one of the adults in the picture is likely his child. The boy, then, would be Gabe’s grandson.

Bastet is littered with little eggs to be collected. Besides the major revelations, the short also reveals that Reaper uses special ammunition which causes necrosis, even in super soldiers. Soldier: 76, a product of the Soldier Enhancement Program alongside Reaper, can’t heal as quickly when shot by Reaper. Ana suggests that they find Mercy nearby to treat the wound, but Jack refuses.

It makes perfect sense that Reaper would have that sort of technology given he’s worked with Moira for years. Ana even mentions “that damned scientist” in relation to the ammo. But the development raises some questions about implications. Do his bullets just cause decay as a new extension of his character theme that just so happens to be effective on super soldiers?

Or did he specifically ask for them to be made because he’s that serious about killing Jack? Are there other super soldiers out there seen as a significant enough threat to warrant special ammunition? Is this all part of another looming Reaper rework adding poison ammo? How ridiculously OP would that be?

Curse Entertainment recently posted a lore video which detailed something interesting involving Sombra. We know Sombra acts completely of her own volition, and it would surprise literally no one if she betrayed Talon because she technically already has. Let’s not forget how she sabotaged the Volskaya mission for her own personal gain.

Curse Entertainment points out that Jack leaves a number of articles open on Ana’s computer about Reaper and the “spiderweb of corporations, government officials, and financial institutions” involved in conspiracies. Ana notes that Jack always preferred things to be black and white, leaving the “messy stuff” to Gabe. Curse Entertainment suggests that if Jack isn’t likely to deal in webs, perhaps this information is being fed to him by someone else.

On the one hand, this is somewhat demeaning to 76’s abilities. Ana could simply be reflecting on how much Jack has been forced to change since their younger days. He even says “times change” when Ana reacts to his talk about seeing the “bigger picture.” On the other hand, it is somewhat intriguing when combined with the fact that Jack’s cinematic takes place in Dorado, where he was attempting to break into LumériCo — a place where Sombra has a great deal of personal history. The most interesting outcome could be a happy medium where Jack has grown into a talented detective who is somehow working in tandem with Sombra to unknown ends.

Last, but certainly not least, is the revelation of another new operation. Jack mentions that avoiding authorities and escaping back to Ana’s hideout reminds him of Prague. Not much is said about the event other than that Ana was forced to carry Jack at some point. She makes a quip about how the event was Jack’s fault because he assigned Reinhardt to a role which required stealth. And that’s that.

This could, of course, just be a passing reference. But, in the way of things, it’s likely we’ll be hearing about Prague again. Could it be connected to the upcoming Archives event this year? Or will Archives follow up on Ana and Jack going to “visit some old friends?”

To complicate matters further, Jack mentions Gabe even sent McCree to look for Ana after she was ‘killed.’ Bastet confirms that this event took place in Poland. Perhaps the next Archive event will detail the operation in Poland instead. This might even make more sense than Prague since it would be more linearly related to Retribution. Poland could reveal Amelie’s transition to Widowmaker, perhaps more information about Gérard, and more on the inner workings of Blackwatch. We’ll just have to stick around for 2019 to find out.

Year Of The Character Challenge?

Shortly after Bastet was released, Blizzard announced Ana’s Bastet Challenge. The event ran from January 8 through the 21st, and segued into the new Chinese New Year event. The Bastet Challenge worked similarly to the D.Va Nano Cola Challenge that coincided with the release of D.Va’s short. Players could earn an Ana spray, victory pose, and the Bastet Ana skin by winning arcade games. They could also earn further sprays watching official streams on Twitch.

Hopefully these character themed challenges will be a new norm for the game going forward. They help break up the down time between larger events, and give Blizzard an excellent opportunity to drop lore tidbits to help battle player fatigue. They also help immensely to shine new light on existing characters often overshadowed by new characters and other developments.

The event also included a cute new cat-themed cinematic, Bastet Rises, made by Dillon Goo. And there have been reports of a change to the Anubis map featuring omnic parts that look suspiciously like a character in the early Overwatch concept art, perhaps hinting at Hero 30.

Here’s To More Overwatch Lore In 2019

It’s a little bit hard to believe all of this has happened in just under a month. Lore updates will likely get a bit quiet again now that the Year of the Pig event is in full swing. But we’re only a month into 2019, and Archives is only a couple of months away. 2019 is shaping up to be a great year for Overwatch lore. What do you hope to see?