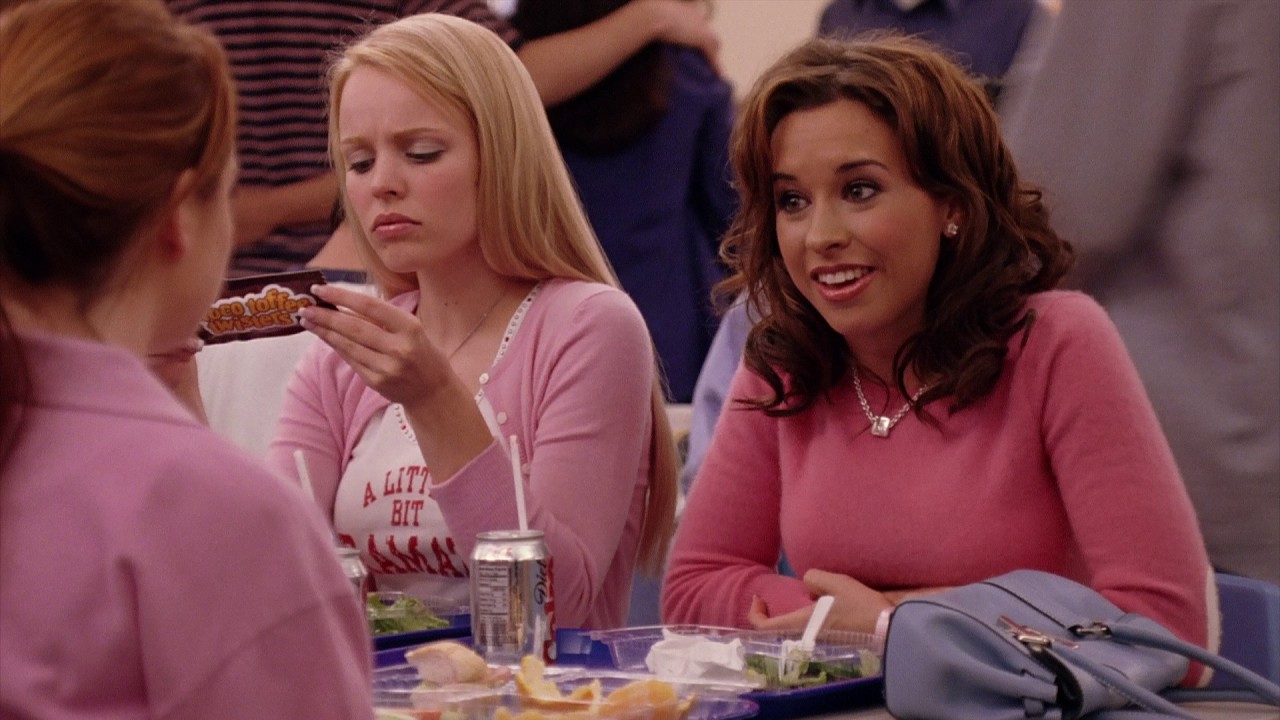 We’re back with another Retro Series and this time we’re keeping it close to home with the 2000s! It’s hard to believe that this decade is already a little retro. Nonetheless, it has been twelve years following the infamous ‘we were all in this together’ and a decade since Tony Stark became Iron Man.

The 2000s are a great decade to reflect on because it marks the beginning of so many of our current trends in the entertainment industry. It’s the beginning of our obsession with superheroes and the beginning of the MCU. As well as the start of Hollywood’s realization that females show up for female-driven content and that there is nothing wrong with nerds. So scroll down memory lane with us, and don’t forget we have our last article coming out next month with the 2010s!

Gretchen couldn’t make fetch happen, but Mean Girls definitely did. While it was released on April 30, 2004, it forever changed October 3rd as we know it. As well as “Jingle Bell Rock,” hoop earrings, and wearing pink on Wednesdays.

While the film written by Tina Fey, didn’t become a successful franchise, its cult following continues to go strong even over a decade later. Like the film and its writer, many of the stars are still some of the biggest names in Hollywood including Rachel McAdams, Amanda Seyfried, Amy Poehler, and Lizzy Caplan. Beyond still being a huge part of our popular culture, the film has, without a doubt, made an important impact on women in comedy and still inspires many. Just last year, it became a musical on Broadway!

Playing video games at home was dramatically changed when Guitar Hero was released on November 8th, 2005. Everyone suddenly became a rock star in their own right, at least for a few hours after school with their friends.

The success would go on to have seven main titles and a number of band-specific expansion packs as well as inspire numerous other successes like Rock Band. It would also become a mobile game and an arcade game. The success of the game was unprecedented and Guitar Hero III went on to be the first video game to earn more than 1 billion in retail.

Team Edward or Team Jacob? Vampires that sparkle. A film adaptation that starred Anna Kendrick before she was Anna Kendrick. Whatever your opinion on the book series by Stephenie Meyer is, it was without a doubt a cultural phenomenon that shaped the 2000s and still permeates our culture today. Even if it is just joking about vampires that sparkle.

Bella Swan’s story of forbidden love with 104-year-old Edward Cullen sold 120 Million copies worldwide and led to a box office record-breaking film adaption. The series itself was not only a huge part of the culture of the 2000s but also more broadly represents that decade’s obsession with vampires. Inspiring other hit adaptations like The Vampire Diaries and True Blood. Its success is also a huge influence today, with Hollywood still focusing on adapting young adult novels to film like, The Hunger Games and Maze Runner.

In the current decade, where it feels like every show that ever reached syndication is being rebooted or revived for another season there remains one show that over fifteen years later is probably still the most yearned for a revival of them all, Firefly. The series by Joss Whedon (Buffy the Vampire Slayer, The Avengers) is one in which many believe was canceled too soon after a one season run on Fox. The series was so beloved that it received a follow-up film, Serenity, in 2005.

Though the space opera/western only continued past the movie with a comic book series; the show still remains a huge influence on our culture. The series is still considered to be the most yearned for revival especially as it still continues to find new fans all around the world. It has currently been revamped as a comic book series under BOOM!

Why so serious… about The Dark Knight Trilogy? Because it is phenomenal. The Batman adaptation by Christopher Nolan is so good it makes you wonder if the latest DC films are actually bad or did they just set the bar too high from the get-go?

The Dark Knight Trilogy which includes Batman Begins, The Dark Knight, and The Dark Knight Rises features Heath Ledger’s Academy Award-winning role of Joker in the second film. The films grossed nearly 2 billion altogether. The wildly successful film can also be credited with influencing the darker tone of the current DC films.

Today we expect character crossover in our franchises on-screen, but back in 2002 came one of the strangest examples. Kingdom Hearts is an action RPG by game developer Square Enix released on the PS2; the game idea was cooked up when Square Enix game producer Shinji Hashimoto ran into a Disney executive in an elevator. Like a weird Halloween/Christmas sweater, the game combines the colorful characters of Disney with the more serious characters of Final Fantasy. Credit: 2000s Kingdom Hearts; Square Enix 2002

As the protagonist Sora, players team up with companions such as Donald and Goofy to defeat an evil force called the Heartless. The concept seems like it wouldn’t work on paper, however, in the hands of game director Tetsuya Nomura, it’s magic. Featuring settings based on Disney films such as Aladdin and varied gameplay. Players are presented with an addictive presentation.

The game even includes various original Disney voice cast members such as Jim Cummings (Pooh) adding to its authentic vibe. Known for its, um, heartfelt themes, Kingdom Hearts connected with audiences; the game spawned a sequel and spin-offs over the years making it an enduring franchise of the 2000s. This coming January, fans will finally be able to experience Kingdom Hearts III after waiting for over a decade. We hope the ambitious next main series chapter is worth the wait for fans.

Much like its protagonist Aang has the ability to control four elements, this series utilizes multiple facets to become masterful. Taking place in a mystical world, Nickelodeon’s Avatar: TLA follows Aang on a journey towards balance and self- actualization. On this journey, series creators Michael Dante DiMartino and Bryan Konietzko created a story that never talked down to its youthful audience.

As Aang travels the world with his friends the series touches on issues of genocide, sexism, and even chakras. Avatar: TLA features beautifully realized characters brought to life through stunning animation and voice work. Though just gracing the television for three seasons, the series’ popularity and impact is tangible; it’s gone on to have a sequel series, , and inspired graphic novels. Avatar: TLA has not only affected the hearts and minds of its fans, but current animation itself. Creative alumni from Avatar: TLA has gone to work on current popular animated series.

High School Musical taught a youthful 2000s generation that they’re all in this together in terms of series fandom love. The Disney Channel Original Movie told the epic love story of high school sweethearts, Troy and Gabriella. From the basketball court to the cafeteria, the musical presented numbers injected with fun and amped-up teenage hormones. Credit: 2000s High School Musical; Disney Channel 2006

After premiering, High School Musical would go on to be one of the most popular Disney Channel Original Movies. The film’s popularity extended with its DVD sales, and it was the first feature-length video to be released on iTunes. The film made stars of its cast members including Zac Efron, Vanessa Hudgens, and Ashley Tisdale. After its international success, Disney charged ahead in creating a franchise: there were sequels, concert tours, even a reality show over the years.

Today, with Disney domination prevailing, it’s no surprise that there’s an inspired television series planned. Titled High School Musical: The Musical, the series will follow a school putting on a production based on the movie. With the series premiering on Disney’s upcoming streaming service, fans will be unleashing their inner Wildcat for years to come.

With the advance of special effects throughout the 2000s, making blockbusters bigger than ever, it only makes sense video games would follow suit. In 2007, Sony developer Naughty Dog released Uncharted for the PS3, an explosive action-adventure platformer.

In treasure hunter Nathan Drake, Naughty Dog created an iconic protagonist. Like Indiana Jones or Han Solo, Nathan is a suave and charismatic figure; he’s one likely to wisecrack after escaping a submarine explosion or in the middle of a gunfight.

With a combination of motion capture, animation, and performance from Nolan North, one can’t help but be charmed by Nathan; the same can be said of his companions – scrappy journalist Elena Fisher (Emily Rose) and cigar chompin’ Victor Sullivan (Richard McGonagle). When all three characters, and actors, are together they possess a crackling chemistry and warm dynamic.

Uncharted brought video games closer to blockbuster cinema than ever before with movie-like storytelling and camera angles. This game would only touch the surface of how far Naughty Dog would push the narrative in future sequels. In current video game storytelling the impact of Uncharted is clear; looking at recent games such as Spider-Man, and its storytelling, it’s easy to see Nathan Drake’s legacy is more than simply finding treasures.

“Tony Stark was able to build this in a cave, with a box of scraps!”

— shouts the villainous Obadiah Stane in a moment of frustration during Iron Man; the character can’t seem to understand how Tony created such advanced Arc Reactor technology from nothing. Likewise, prior to 2008, it would be hard to foresee how Marvel Studios could create a successful franchise from its first film.

The film had a lead actor who was considered a risk. A hero not at the forefront of the general audience’s minds. A heavily improvised script. Potentially worrisome elements were sparks in the hands of director Jon Favreau, igniting the big bang of the Marvel Cinematic Universe. Iron Man exploded on the scene with a world of humor and a perfect performance from Robert Downey Jr. After its release audiences knew there was only one person who deserved to say “I am Iron Man,” worldwide the film made a total gross in the box office of $585,174,222.

In Tony Stark, Downey Jr. created a complex figure — a snarky billionaire working towards redemption. Due to the actor’s performance, audiences are invested in Tony as a man perhaps even more so than his armored alter-ego. The character-based storytelling would become a staple in future Marvel Studio films such as Thor and Captain America.

Just like Obadiah Stane and the Arc Reactor technology, many studios have attempted to recreate the success of Marvel Studios and their MCU. However, starting with Iron Man, Marvel Studios proved to be just like Tony Stark — one not to be easily imitated.